The plays may have been more scandalous than the author's sex life, but visitors still plant kisses on his grave 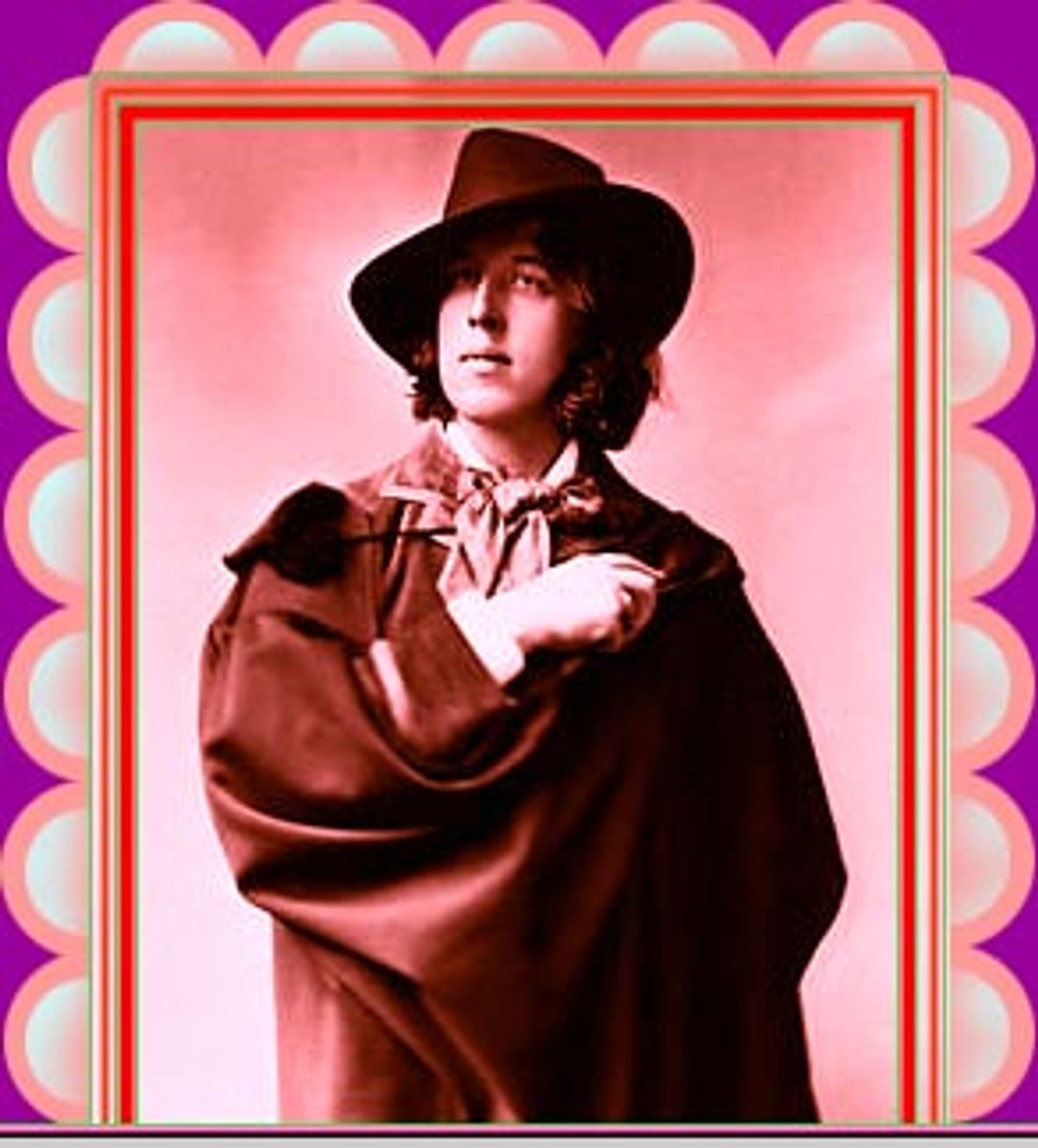 Oscar Wilde, the 20th century's most famous sexual dissident, has been dead 100 years to the day. From his deathbed in a seedy Paris hotel, he has seeped into our collective consciousness and become a contemporary celebrity almost as popular as Lady Di. More than just a gay martyr, Wilde was a subversive Superman willing to hazard everything. His lectures were camp performance art and his plays celebrated decadence, gender swapping and the "cult of the clitoris." He seems to have been the First Modern Man to emerge from the moralizing slime of the Victorian age.

Wilde's tomb in Père Lachaise has been subjected to clumsy caresses and outright mutilation since he was moved here in 1909. On the first day of this month -- All Saints Day -- his tomb was so smothered in lipstick kisses you could not read his name. This kind of sacrilege forms part of the surreal atmosphere in the Cimitière du Père Lachaise, where lust regularly stalks the dead. (The headstone of Jim Morrison is one of the top attractions in Paris but no longer the scene of orgies because of humorless attendants who are unmoved by pleas to "cancel my subscription to the resurrection.")

Quality time with the deceased Victor Noir is said to increase a woman's fertility, particularly if you touch him there. A 19th century cross between Bob Woodward and Tom Cruise, he was murdered for investigative reporting into the corruption of Napoleon III. The bronze likeness on top of his tomb, with oxidized pants partly unbuttoned, shows him as he must have looked in death at age 22 in 1870. Since then thousands of wannabe-pregnant women -- including my wife -- have fondled his shiny crotch. Passionate kissing has given a gloss to his lips and a gleam to his right big toe.

Today, however, it is Wilde who holds court in this low-rise city of the dead. When I located Wilde's tomb, I found myself floating in a stream of arrivals. The Trinity College Dublin Association was getting ready to place a big pot of lilies at Oscar's feet. "One of Oscar's wishes was to be talked about 100 years after his death" said Anne Fieleman after she set down the pot. "Here we are a hundred years later and we're talking about you, Oscar. I hope others will be talking about you a hundred years from now." An Irish priest then read aloud from Wilde's work and commented: "I think his last writings were full of hope and profoundly Christian and a wonderful meditation for me not only on death but the life that we live out towards death." He asked us to join him in prayer: "Merciful lord, turn towards us and listen to our prayers of Oscar Wilde's centenary anniversary. We ask you to open the Gates of Paradise to Oscar Wilde and we ask you to do that the same way as you opened them to the good thief in Calvary. We make this prayer through Christ our lord, amen."

Before the rest of us could nod and say "amen" a tour group arrived led by a cemetery guide who approached the angel and pointed between its legs. "This is the tomb of the famous Irish writer and homosexual Oscar Wilde," he said in French. "Notice that there is no penis. Queers (pédés) used to come here at night, get on all fours and thread the angel's member into their asses. In 1910, the cemetery guardian had the object of desire removed and it is still used as a paperweight in the office of the cemetery's director." His knowledge of Wilde exhausted, the guide moved on, leading his group to the next stiff, "Madame Piaf."

For whatever reason, the 10-ton male angel that covers Wilde seems to invite misunderstanding and abuse. I overheard one young French girl admiringly describe it as "Japanese." Although it looks vaguely Mayan to me, the angel was inspired by the Sphinx. It was sculpted by American artist named Jacob Epstein and financed by an "anonymous" lady. "Every man kills the thing he loves ..." would do just fine as an epitaph. No brave person has attempted to dynamite it, but there is a vast conspiracy to finish it off kiss by kiss. Hundreds of lipstick kisses in pink, red, brown and purple have been planted all over it, especially in the lower reaches. Although much of the color was scrubbed away between All Saints Day and the centenary, the animal fat in the lipstick ensures that the mouth marks will remain in the stone forever.

As the Irish were leaving, an elderly woman arrived and began to rearrange Wilde's tomb as if it were part of her backyard. Madame C.H. has been puttering around the tombs in Père Lachaise for 15 years. Wilde is a favorite. "The notes were a form of pure love" she says, referring to the old custom of stuffing messages around the angel's toes and knees "but the kisses are degrading." I couldn't find any traces of the messages Madame was referring to but I copied down some of the multilingual graffiti that was still legible: "You taught me what is love," writes Luca from Pescara. "What's the craic?" asks Aisling from Dublin. The chorus adds: "Wilde, je t'adore!" "Oscar, it is still pure Greek!" and "You are the best! You can never die!" Deeply etched were the words "The Man."

For Wilde's grandson, who pays for the upkeep, the kisses are the last straw. "I don't know what to do now," he told the London Observer last month. "Perhaps I should write to L'Oréal asking them to put warnings on their lipsticks." He ordered a plaque for the base of the tomb that reads (in English and French): "Respect the memory of Oscar Wilde and do not deface this tomb. It is protected by law as an historical monument and was restored in 1992." Perhaps the tomb smoochers think that they are showing respect. Perhaps they look at themselves in the mirror afterward and say, "Oscar Wilde's kiss is still on my lips."

Wilde was originally buried in utmost obscurity at a grave in Bagneaux Cemetery, a place that seems to have disappeared from any French map. When Robert Ross had him dug up in 1909 and transferred to elegant Père Lachaise, the body was eerily intact. Catholics have always regarded the absence of putrefaction as a sure sign of saintliness. The miracle of Wilde's being "still in one piece" encouraged French writer André Gide to get in touch with his spirit by seance. Gide was grateful to Wilde for being a friend and awe-inspiring role model -- and for seeing through his hetero act and "debauching" him in Algeria with the help of a flute-playing rent boy. A spirit claiming to be that of Wilde visited other mediums and provided a critical review of a West End production of one of his plays in the 1920s.

The word "homosexual" was not in use in Wilde's day. However, a hostile poem written at the time of his downfall accuses him of "sexomania." The word used during his 1895 trial was "indecency," and "Sodomite" became his middle name after his conviction. Technically speaking, Wilde doesn't seem to have buggered anyone if we are to believe his first lover, Robert Ross, and his distinguished biographer, Richard Ellman. According to them, he delighted in oral sex with men and boys but, when push came to shove, preferred it intercrural -- a form of intercourse that involves insertion between the thighs. There was a theory, popular among Victorian academics, that most of the male homosexual relationships among Greeks didn't involve penetration either. Classical scholars in Wilde's day regarded it as altogether more proper to think that Plato and company engaged in leg fucking rather than sodomy.

Wilde might have lived well into the 20th century, writing plays, basking in celebrity and growing old like Quentin Crisp "disgracefully." But his trial and the two years of hard prison labor contributed directly to his death at 46. Although it is still not known if that death was caused by syphilis or a rare type of middle ear infection, either one would have been seriously aggravated by prison life. Whatever the cause of death, his body foamed at the nostrils and ears shortly after he expired. "If I were to outlive the century, it would be more than the English could stand," said Wilde, and he didn't outlive it by much. However, as a social rebel and martyr to artistic and sexual freedom, Wilde's ungainly shadow only grew longer. A decade after his death, he was the second most read author in England after Shakespeare despite his reputation as an agent of the devil. Wilde the artist -- writing works like "The Picture of Dorian Gray," "Salomé"; and "The Importance of Being Earnest" -- was always a more serious threat to Victorian morals than Wilde the bugger.

The anti-Wilde hysteria reached a posthumous climax in London during the first production of his play Salomé and ended in yet another trial. Leading actress Maud Allan was forced to sue for libel after a conservative publication accused her of being a lesbian and a traitor. Wilde himself was denounced at the trial by his former lover Lord Alfred Douglas, now a bitter proto-fascist and anti-Semite, as "the greatest force for evil that has appeared in Europe during the last 350 years." At the same time, in the United States, his plays were immensely successful on Broadway while a pornographic book circulated on college campuses with the title "The Sins of Oscar Wilde."

"I awoke the imagination of my century so that it created myth and legend around me," wrote Wilde, after being released from prison. And so it did.