Call it the "free-network movement": Grass-roots hardware hackers are creating a wireless wonderland with megabits of connectivity for all. 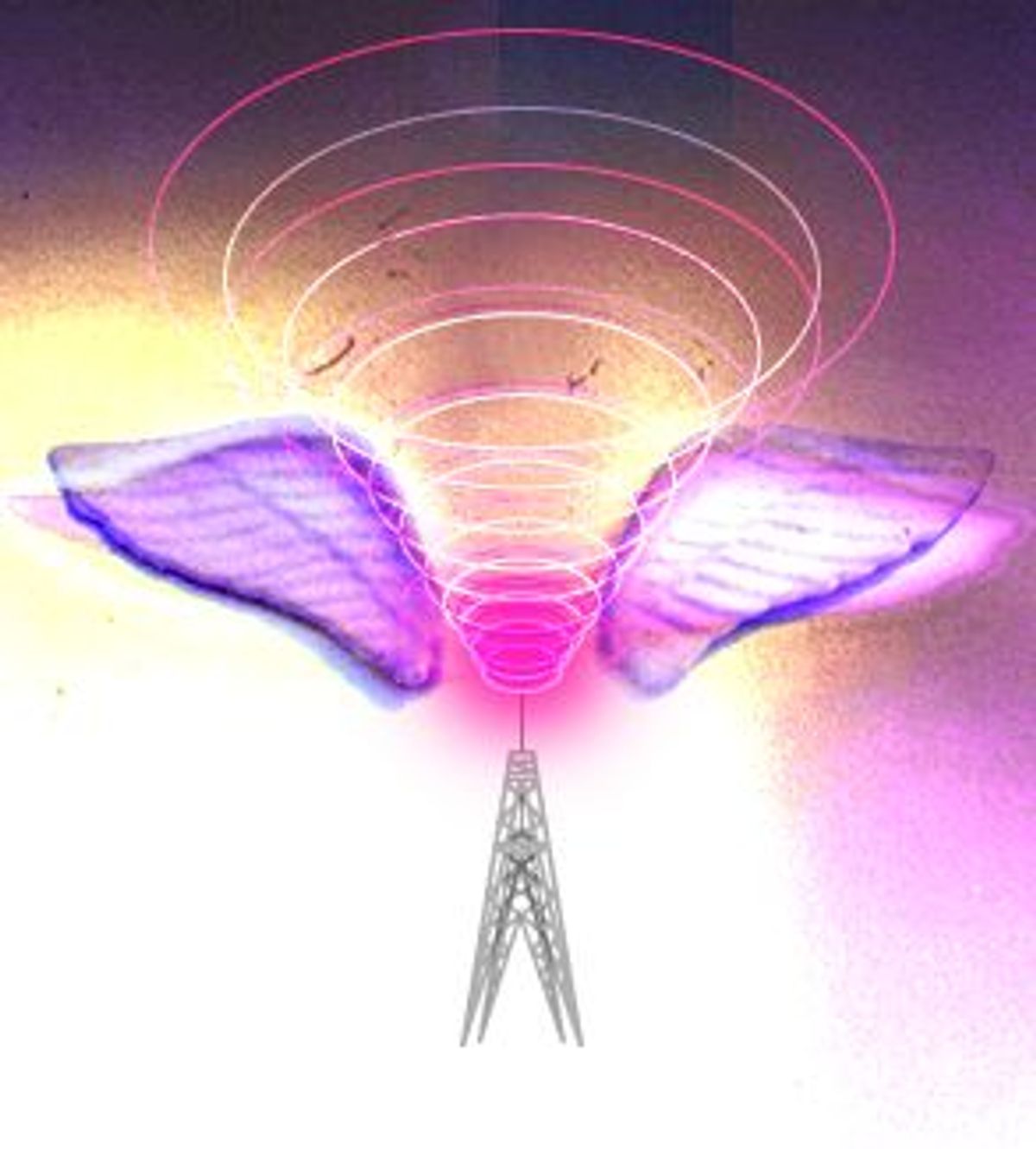 Matt Westervelt and three of his friends had tinkering on their minds when they started building their own high-speed wireless network in June. Climbing on the roofs of their Seattle homes, building antennas and trying to make them work with Ethernet protocols sounded like fun. Plus, if the whole shebang actually worked, they figured they'd be able to access their home computer files from the local cafe, play Net-based games while sitting on each other's couches and stream video onto their personal data assistants -- all at speeds of up to 11 megabits per second, far faster than what cellphone operators or other wireless providers offered.

"To be honest, we just thought it was pretty cool," says Westervelt, a 28-year-old systems administrator at RealNetworks who spearheaded the effort.

Westervelt's crew isn't the only group of geeks who have caught the wireless Ethernet infrastructure bug, who are, as the Wall Street Journal put it, "taking indoor wireless technology outside." Community-based wireless efforts like Guerrilla.net of Cambridge, Mass., Consume.net of London and SFLan in San Francisco are steadily gathering grass-roots power. In Seattle, Westervelt's one-time summer hobby now has a name (Seattle Wireless), a Web site and over 30 participants.

"It's taken on a momentum of its own," says James Stevens, founder of Consume.net. "There has been quite a rush toward what we're doing."

Call it "the free-network movement" -- a bubbled-up-from-the-underground effort to spread high-bandwidth wireless connectivity everywhere. In their attempt to create a user-generated alternative to a top-down industry -- in this case, telecom -- initiatives like Seattle Wireless and Guerrilla.net look a lot like the original Napster, the Web itself or the world of free software. The free-software movement, in fact, is a working model for many wireless Ethernet pioneers. Many people involved -- including über-geek Brewster Kahle, founder of SFLan -- view it as free software's newfound twin: open-source development of operational antennas rather than operating systems.

But building what Kahle calls "a citywide wireless LAN that grows from anarchistic cooperation" isn't as simple as contributing code to Linux. Participants must have not just time and patience, but also the soldering skills of an electrician, not to mention the ability to work on rooftops without falling. Ultimately, "it's all a bit dangerous," Stevens admits.

It's also expensive. Although these networks send signals along the free public radio spectrum, Westervelt says that new users must have two computers to get started -- and then they still usually have to cough up about $800 to buy all the components needed to get hooked up. Even the fact that they use 802.11b protocols -- the wireless version of Ethernet, a standard used in most computers and almost all local-area networks or LANs -- hasn't managed to make the system all that cheap.

And buying into the network is no guarantee of stellar service. The signals flow in the range of 2.4 gigahertz, a frequency that microwaves and other devices like X10 wireless webcams also use -- thus "dirtying" the spectrum and slowing down connection speeds. Rain and walls also clog the pipes. If you're not in the antennas' line of sight, you may not get service at all since the signals can't pass through concrete.

But if the free-network movement is anything like the free-software movement, maybe these early obstacles are just bugs in the system that will be fixed by an ever-burgeoning community of wireless Ethernet enthusiasts. Wireless by the people, for the people.

Guerrilla.net has been around since 1996 -- but the growth in interest in creating community-based telecom has, by all accounts, exploded over the past year and a half. Not surprisingly, the spark for all this activity lies with advances in the realm of bits and bytes. People are building wireless Ethernet networks because they finally can, says Bob Metcalfe, the creator of Ethernet and a founder of 3Com. "Until recently, wireless Ethernets have been technologically undoable," he says. This is no longer the case because Moore's Law -- the idea that processing speeds will double every 18 months -- has struck again, seeping beyond microchips and into networks.

Specifically, Ethernet's rise set the stage for the present rooftop dramas. When Ethernet gained enough of a critical mass about two years ago to become the de facto standard for all local area networks, the prospects for the wireless world changed drastically. Businesses and colleges started to consider campus-wide wireless networks at the same time as wireless modems began appearing on the market. Then, in the summer of 1999, Apple started bundling an AirPort wireless antenna into a handful of its laptops and the G4 desktop. This decision to bundle, hackers say, changed everything. It legitimized wireless connectivity and made mainstream consumers aware for the first time that their laptops need not necessarily be tethered.

It also gave hackers easy access to an otherwise hard-to-find piece of technology that they needed: the antenna connector. To date, the antenna connector remains the key ingredient to any successful wireless network, says Bob Keyes, a security consultant in Cambridge, Mass., who was one of the four founders who launched Guerrilla.net. It is the link between a home computer and the cable that runs to a roof antenna -- the glue that holds the network together. The 2.4 gigahertz antennas -- tree-and-branch wonders that resemble TV antennas but are small enough to fit in a backpack -- don't come with these little doohickeys, which meant that wireless-obsessed geeks had to dig them up at ham radio boutiques or commercial wireless providers.

Now they just have to dig them out of an Apple computer. This is a significant change. Whereas the old connectors were expensive, hard to find and difficult to make work with a computer as opposed to, say, a television, the new Apple connectors require far less hassle. "We usually just get the computers from friends, open them up and just pull out the antenna and the connector," Keyes says. Tape it to a cable, solder that to a rooftop antenna (through a more generic connector called an SMA) and the network is up and running. Simply tweak the network configurations on a Palm VII or another Web-enabled device like a laptop with a wireless modem and your home-based files are accessible -- via air, which as Keyes notes "is very cool."

The total cost: about $800, a third of what it would have run a few years ago.

The Net is also available through these networks, in conjunction with an established ISP. Free-software model or not, wireless Ethernet enthusiasts may be building their own alternative infrastructure, but they are not aiming to completely reinvent the Net. Westervelt, for example, says that Seattle Wireless wants to "coexist with ISPs." He envisions being able to use the home-built network when he's in town, a hard-wired connection when he's at home and a traditional cellular uplink when he's traveling. "We're not trying to put ISPs out of business," he says. "We need them."

Still, Jupiter Research broadband analyst Dylan Brooks sees wireless Ethernet activity as a wake-up call, a creative protest against today's telecom status quo, and the more militant participants agree. They talk not just of fun and AirPorts but also of present-day problems that they'd like to see fixed -- like the nagging irritation that cellphones don't work in some conference centers or the widespread dissatisfaction that it takes some consumers months to get DSL installation.

Just give them the chance, they argue, and they could fix all these bugs by applying their open-source development model. Everything that these groups do is open to the public. It's a teach-and-be-taught ideal that mimics how free software is created, but runs completely counter to the telecom business model.

"The Internet grew because millions of companies added infrastructure to the Net," Kahle says, yet "the telco model is that a single company adds all the infrastructure." This is the reason that you can't get faster data service on your cellphone or connect easily in an office building. It's not that these tasks are technologically impossible; it's just that "the monopoly system gets good enough and then the incumbent plays defense," Kahle says. In contrast, an open approach "allows hot spots to be improved organically."

Choice is what matters most to these wireless gurus. The goal is to give users power over their own forms of communication, says Keyes of Guerrilla.net. "The free-software movement made it so you could control your computer," he says. "This movement -- the free-network movement -- gives you control over infrastructure. It gives you a choice of how you want to connect." And maybe someday, adds Westervelt, these networks will even be used as the model "so that if you live in a developing country and you want a network, you'll be able to build it yourself," he says. "All the information will be there."

Of course, for now, these hopes are nothing but sci-fi fantasies. None of these initiatives has more than 30 antennas up and running, not nearly enough to cover their metropolitan areas.

But people like Westervelt remain upbeat. Wireless notebook-size Web-pads using Ethernet connections will appear next year, and if the Federal Communications Commission allocated a specific part of the spectrum for nonprofit telecoms, the movement could take off. Plus, they argue, there are other, more subtle benefits. Setting up the network isn't just "cool" because of what it can offer in the virtual world, says Westervelt. Indeed, a large part of the fun derives from the fact that it's a healthy alternative to cyberspace's lack of a material reality. It's physical, a hands-on, "MacGyver"-like attempt to create giant brains, and thus, it's a lot of fun.

"We sit behind screens all day," he says. "Getting up on a roof and sticking an antenna on is so great because it's a change. We're not just tinkering anymore, we're meeting new friends and getting some air."