Boasting a radical plan to open the border and expand trade with the U.S., Vicente Fox takes office and sets the tone for a new North American order. 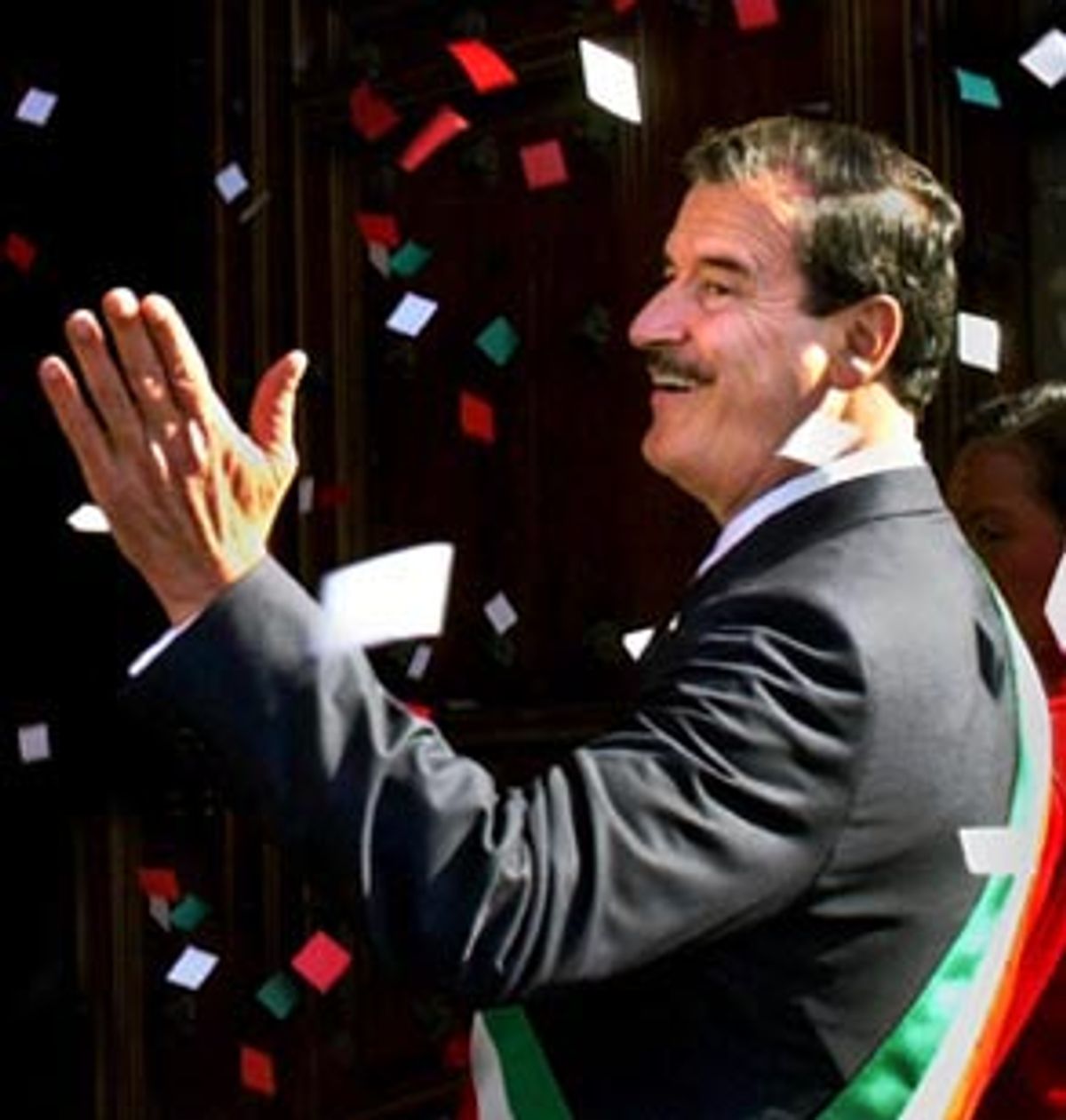 According to legend, Mexico's flag -- an eagle sitting on a cactus with a serpent in its mouth -- was the sign the Aztecs received telling them to settle modern day Mexico City. Today that image better describes the challenges facing the country's new president, Vicente Fox Quesada, a man who boldly ended seven decades of one-party rule by devouring his poisonous enemy while landing on a knot of thorns, some of which are of his own making.

Fox, a 58-year-old, tough-talking cowboy and ex-Coca-Cola executive, is the first presidential opposition candidate to ever make prey of the Institutional Revolutionary Party (PRI), a slippery entity that managed to hold on to power for 71 years by constantly shedding its skin and reinventing itself.

And if Fox's recent Cabinet appointments are any indication, his administration promises to mark a major change of tone in U.S.-Mexico relations. With proposals to add to the North American Free Trade Agreement and loosen border restrictions for workers, Fox appears to be demanding from Washington a bigger piece of the North American pie.

His inauguration Friday, attended by such diverse luminaries as Cuban President Fidel Castro (with whom he is friends), U.S. Secretary of State Madeleine Albright and Colombian author Gabriel García Márquez, marked an indelible moment of change in Mexico's long and turbulent history.

"Let us proceed sensibly and bravely to demolish all vestiges of authoritarianism and to build a genuine democracy," Fox boomed during his inaugural address.

His term as president began like no Mexican head of state's has before. Fox awoke early and headed to the Basilica of the Virgin of Guadalupe to pray to the nation's patron saint, as a mile-high plume of smoke from Mexico City's Popocatepetl volcano hung above him. Afterward, he ate breakfast with capital street children, dining on sweet tamales as he pledged to make the poor and marginalized his first priorities. As Fox headed to Congress to be sworn in as president, a 5.1 earthquake shook the ground beneath him, as if even nature had to recognize the dawning of a new era in Mexico.

"I promise to be a president who is simple, close and a friend to all of you," he told Mexicans later that day in a public address. After seven decades of authoritarian rule marked by corruption and cronyism carried out with impunity, Fox's pro-business National Action Party (PAN) has swept into power on the shoulders of a larger-than-life man whose own bounding optimism has created high expectations for his administration.

Fox has vowed to take a hard line against crime and corruption, beginning with a complete overhaul of the law-enforcement system. He has singled out the poor, the indigenous and migrants, who have historically been ignored, as his highest commitments, creating new posts to attend to their needs.

In addition, he has pledged to open the U.S.-Mexico border to a free flow of workers and bring Mexico's economy in line with that of the United States, under a new plan he calls "NAFTA plus," even while railing on the U.S. for its voracious drug appetite, which he says has helped turned Mexico into a drug-trafficking den.

While these ambitious ideas and great expectations have marked Fox as a beacon of change, they could also become thorns in his side. Although Fox's progressive domestic proposals are much needed, the PAN does not hold a majority in either house of Congress, and faces fierce opposition from the PRI, which is still smarting from a loss of power, and the left-of-center PRD, which frowns upon the PAN's gung-ho business stance.

"I think it's only natural that when someone brings this kind of enthusiasm, energy, vision and record of achievement onto the national stage, that it would generate a great deal of enthusiasm and expectations," says Paul A. Laudicina, a vice president of global management with consulting firm A.T. Kearney. Laudicina predicted two years ago, based on Fox's success as governor of Guanajuato, that he would be Mexico's next president.

Fox is also entering a political territory so new that it makes this year's U.S. presidential election look like mere self-reflection.

Whereas the botched U.S. election drew attention to the intricacies of the country's electoral system, Mexico's election was an epiphany of democracy. Aided by electoral reforms ironically put in place by outgoing PRI President Ernesto Zedillo, Fox grabbed 43 percent of the vote in a three-way race that was widely seen as the first fair election in Mexico's history. When Zedillo went on national television July 2 to announce Fox as the nation's next president, newscasters' jaws gaped while PRI loyalists plotted the political lynching of their lame-duck leader.

Mexico was so unprepared for a non-PRI government that there weren't even funds available for the long five-month transition between Election Day and Fox's taking office. For the first few months of the transition, the Fox team had to build its new government from scratch, working out of a pair of suites in a downtown Mexico City hotel while paying the endless bills that its Herculean task required. Finally, the Finance Secretariat approved funds to finance the transition, but even that garnered flak from PAN opponents, who seemed to expect the political newcomer and his team to go it alone.

Beyond a prickly domestic political scene, Fox's ambitious plans to reshape the U.S.-Mexico relationship have left some wondering if he has ordered his cowboy boots two sizes too big. While touring North America last September as president-elect, Fox saw his open-border proposals given the cold shoulder by both main U.S. presidential candidates and Canadian Prime Minister Jean Chrètien.

"The immigration proposals and drug-trafficking finger-pointing are going to congest the already complicated agenda between the U.S. and Mexico," warns Joel Estudillo Rendón, director of Information and Analysis at the Mexican Institute for Political Studies.

Perhaps further complicating bilateral relations, Fox tapped Jorge Castañeda, an intellectual leftist known in the past as being anti-American and anti-NAFTA, as the new foreign relations secretary, a sticky post that involves working with the U.S. on numerous complex bilateral issues.

But not everyone is as concerned with Fox's radical U.S.-Mexico plans, as they recognize the need to rethink the bilateral relationship given the countries' increasing level of economic and cultural interdependence.

Fox's open-border plans, for example, have garnered praise from some analysts who acknowledge that, one way or another, borders become porous over time. "It's a highly emotionally charged issue," says Laudicina. "If one just talks about opening borders, you don't get much dialogue. One has to peel back the leaves of the artichoke and start talking about how to meet the U.S. and Mexico's mutual needs."

According to John Dawson, director of Mexican affairs at the U.S. State Department, Fox's new approach to these needs are not being ignored.

"As far as illegal immigrants go, that's something we can easily work with him on, as Americans are realizing that they benefit [from migrants] in terms of labor," says Dawson, referring to Fox's new Office of Mexicans Living Abroad. Dawson also downplays concerns over Castañeda.

"He has been critical of the U.S. in the past and some congressional pundits in particular have questions about that," Dawson says. "But in my view, this guy is brilliant. Fox will be calling the foreign policy and Castañeda will play it out."

Indeed, a lot of high expectations for the new government depend on Fox's own ideology. If the PRI was the fat, crooked landowner accumulating riches on the backs of the poor farmworkers, Fox is the cocky corporate raider who decided to buy the farm, fix it up and run it as a business.

Just look at the rest of his Cabinet -- while political powwowing and back-scratching represented the putting together of past PRI governments, his choices more resemble a who's who of Mexican business.

"(The Cabinet) is a very interesting mix of experienced people who seem to have all the right stuff to be able to achieve what the president wants to achieve," says Laudicina.

New Finance Secretary Francisco Gil Díaz is the former president of long-distance telephone operator Avantel, and a reputed fiscal hardliner -- a first in a country that boasts the saying, "anyone who pays taxes is just giving a gift."

Energy Secretary Ernesto Martens, who is saddled with the task of averting a national blackout amid low energy supplies while tiptoeing around the nasty "P" word of privatization, has never before held a government office. Before taking on the post, Martens was president of an airline holding company and a large glass-making firm.

"Fox obviously has a business bias that reflects his own background," says Dawson. "But I think his Cabinet picks show he's interested in getting quality people rather than hacks."

Hacks are exactly what the new government does not need. If Fox is a man of big promises, he is also a man saddled with big problems.

Despite Mexico's recent economic upswing, and the fact that this will be the first government transition in 25 years that isn't blighted with an economic crisis, the country remains weak.

It's estimated that 40 to 60 million of Mexico's 100 million citizens live in poverty. According to government figures, one-third of the country's working population earn less than the minimum wage of roughly $4 a day. Furthermore, the gap between the rich and the poor would be better described as a grand canyon, where around 10 percent of the population holds nearly 40 percent of the wealth.

Striving to make ends meet, nearly one-third of the economically active population work in the informal sector, where they do not pay taxes. Others turn to crime. Education levels are still quite low, despite progress in recent years. The average Mexican child receives just 7.7 years of schooling, although this is a great improvement over the average 2.8 years they received in the 1960s.

Poverty, crime and a lack of education are all deeply entrenched problems that cannot be solved in just one six-year presidential term. However, Mexicans believe if there is one man who can spearhead a revolution, it is the same man who managed to swoop down and pluck the serpent from the country's path toward prosperity.

"Today I have news for all of you. Today we celebrate not a change of government, but the first step in giving our country a better future," Fox bellowed from the balcony of the national palace to the throngs of cheering citizens gathered in the capital's main square Friday.

"This is a revolution of hope!" Fox screamed. "Viva Mexico!"