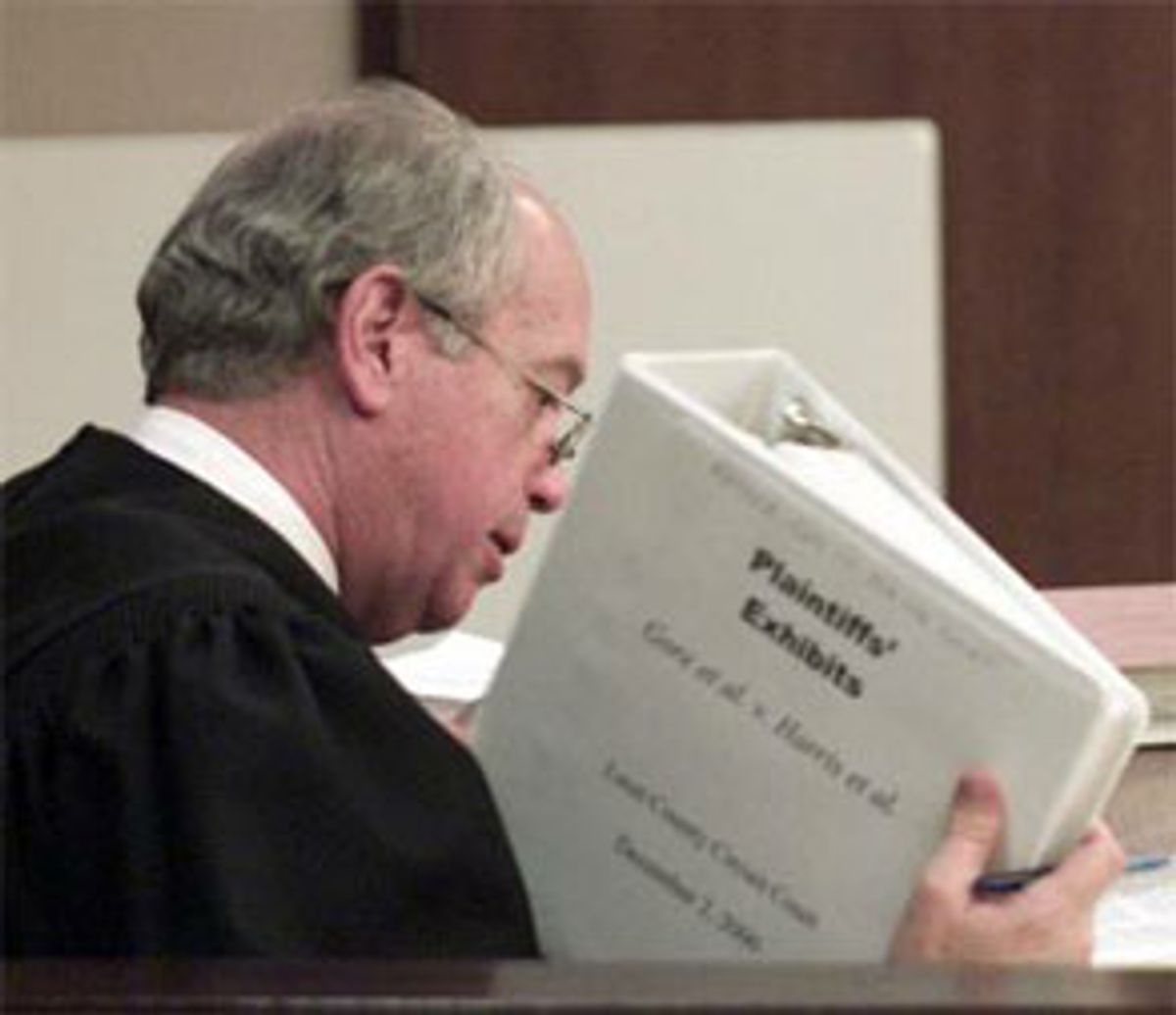 The Florida Legislature will hold a special session on Wednesday to consider appointing the state's 25 electors as a preventive measure against any court action that could overturn George W. Bush's certified win in the Sunshine State.

Under Article II of the U.S. Constitution, state legislatures have the authority to appoint slates of electors to the Electoral College. Those slates must be set by Dec. 12.

Meanwhile, Vice President Al Gore's election hopes are hanging on a case crawling along in a Leon County Circuit Court. The Democrat, who has been battling for a manual recount of ballots in Miami-Dade and Palm Beach counties, needs a speedy decision in his favor from Judge N. Sanders Sauls.

But there was nothing speedy about the proceedings in Tallahassee on Saturday. When Sauls called a recess at 1:30 p.m. EST, exactly one witness had completed his testimony. Kimball Brace, president of Election Data Services, spoke about the shortcomings of the voting machines used in Miami-Dade and Palm Beach counties, a crucial part of the Democrats' case to get 14,000 disputed ballots recounted by hand.

During a Friday hearing, Sauls said that he wanted to complete the hearing in 12 hours, and pressed the Republican attorneys to trim their list of 95 witnesses. That cheered Democrats, who are convinced that the Republican legal strategy hinges on using as much time as possible to run out the clock, forcing everyone to accept the certified result, which gave Bush a 537-vote win. But things will have to speed up if Sauls is to meet his own target of getting the hearing done on Saturday.

Unfortunately for Gore and those hoping for a speedy process, GOP lawyers have filed an election challenge of their own. They reportedly served papers on the Gore lawyers during the opening arguments of the hearing, challenging results in Volusia, Broward and Seminole counties, a move that could slow the process of the vice president's case.

The 14,000 ballots that Gore wants counted come from Miami-Dade and Palm Beach counties. The vice president's lawyers also argue that Nassau County should not have recertified an Election Night tabulation of votes that erased a 52-vote gain for Gore in a machine recount. Lawyers for Gov. George W. Bush want to stick with the recertification. The Republicans were successful in pressing their demand that all 1.16 million ballots from Palm Beach and Miami-Dade counties be shipped to Leon County in a rental truck -- tracked by news helicopters, O.J.-style -- in case Sauls orders a manual recount.

The judge did press the Republicans into trimming their witness list, which originally included 95 names. He also denied a request from Bush attorneys to have 1.2 million additional ballots brought to the Tallahassee court for a possible manual recount. Those ballots are from counties they believe improperly counted votes for Gore.

For this ongoing post-election drama, Saturday's setting -- the no-nonsense Sauls presiding over a cramped, dismal-looking courtroom, televised live -- is a change from the Friday's regal, proper (no cameras, please) and sometimes fiery hearing at the U.S. Supreme Court, which heard oral arguments over whether the Florida Supreme Court was correct in extending the Nov. 14 deadline for certifying the state's presidential election results. A handful of counties asked for an extension of the deadline so they could complete manual recounts of thousands of ballots.

Meanwhile, in Florida, the Supreme Court put the kibosh on a challenge to Palm Beach County's "butterfly ballot," ruling the controversial voting form was not a large enough violation of state law to either void the election result in that county or require a revote. The controversy over the ballot erupted shortly after Election Day when Reform Party candidate Pat Buchanan received unusually strong support from largely Jewish precincts in Palm Beach County.

The court also rejected the Gore campaign's request to accelerate the recount of undervoted ballots in Miami-Dade County.

If the Seminole suit succeeds, Bush could lose 10,006 votes to Gore's 5,209, a net gain of about 4,800 votes for the vice president and more than enough to overcome the current 547-vote Bush lead -- or even the 930-vote advantage for the Republican that was certified Nov. 14. Along with disputing the merits of the suit, Republicans have complained that the presiding judge, Nikki Clark, is biased against the Republican candidate because Bush's brother, Florida Gov. Jeb Bush, passed her over last year for an appointment to a higher court. Clark has declined to recuse herself from the case.

The court kept to its timeline, allowing each side almost exactly 45 minutes to make its arguments. Republican lawyer Ted Olson was questioned repeatedly about the necessity of intervention by the U.S. Supreme Court. Justices John Paul Stevens and Ruth Bader Ginsburg seemed particularly resistant to the prospect of overturning a state Supreme Court, and Ginsburg faulted the Bush team for the strident criticism of those Florida judges. "I do not know of any case where we have impugned a state Supreme Court the way you are doing in this case," Ginsburg said. "I mean, in case after case, we have said we owe the highest respect to what the state Supreme Court says is the state's law."

Laurence Tribe, representing the Gore campaign, got the toughest treatment from conservatives Chief Justice William Rehnquist and Justice Antonin Scalia, who both faulted the Florida Supreme Court for changing the vote certification deadline.

Exchanges between Tribe and Scalia got particularly heated, with each raising his voice and repeatedly interrupting the other as Tribe tried to argue that the Florida Supreme Court wasn't overstepping its bounds when it set a new certification deadline. Scalia said, "Professor Tribe, I would feel much better about the resolution if you could give me one sentence in the opinion that supports" the Democratic argument that the state Supreme Court executed its rights under the Florida Constitution. "Justice Scalia, I can do a little better than find a sentence," Tribe replied in his defense, claiming that the Florida Supreme Court acted without violating its state's constitutional constraints.

Court watchers predicted that a decision might come in the middle of next week, and that the tenor of the questions suggested a split decision. Many believe that an adverse decision from the nation's high court would be a mortal blow to the vice president. It would invalidate the more than 300 manually recounted votes Gore has picked up since Florida Secretary of State Katherine Harris originally certified the election on Nov. 14 and Bush led Gore by 930 votes.