A pair of video artists try to turn the TV into a love machine with a nonpornographic video designed to steer your gaze toward your partner. 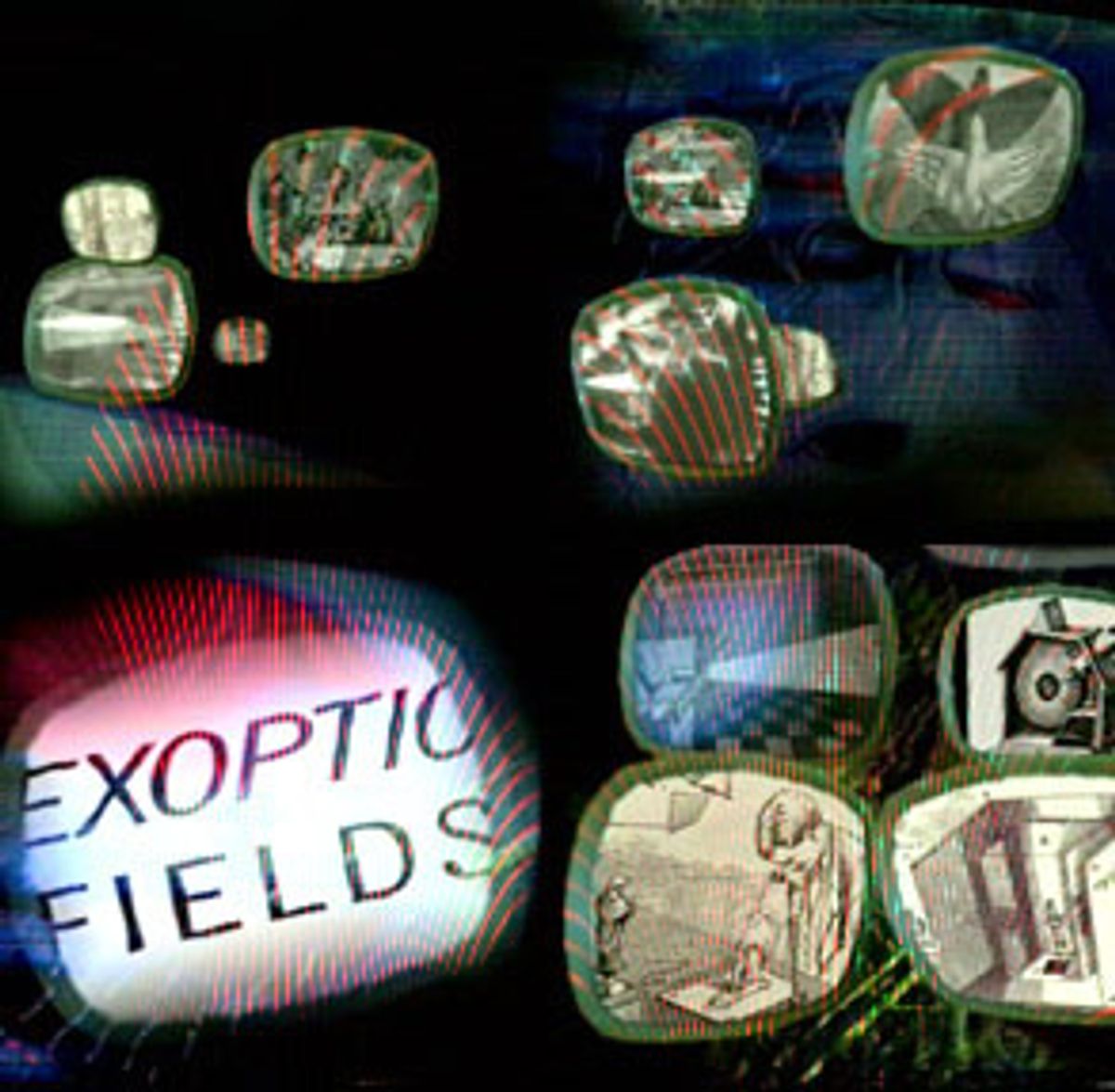 Rather than waste millions on Super Bowl Sunday, Willy Mal kicked off the Exoptic Fields ad campaign in the August-September issue of the Utne Reader. "The video to end all videos," blared the tiny ad, will "lure your eyes away from the screen by design." Packaged like a bottle of pills, the tape is indicated "for the relief of TV and Internet addiction. Warning: May intensify off-screen sensations."

Since the ad appeared, Willy Mal (the name he's using for this project) has sold 100 copies of the Exoptic Fields tape. He decided to aim the second "deflective" video at something more compelling than turning off the television: sex. He enlisted video artist Benton-C Bainbridge to produce a video to pull viewers' eyes toward the bodies in the room. The result is the 45-minute "Blind Heat." Bainbridge and Mal chose the length because it was 10 times the national average for coitus, according to a stat they read somewhere.

Mal's exoptic fields concept includes a smidgen of optical science about which colors are perceived better with peripheral vision (blue, green and yellow). The first Exoptic Fields video employs those principles: It's one hour of a brick wall turning slowly blue, then greenish yellow, then blue again from a horizontal line in the middle outwards. It is boring but vaguely pleasant, something that could decorate a nightclub wall. I didn't make it all the way through, but I didn't feel my eyes pushed away either.

"Blind Heat" is much more watchable, even though Mal's ad copy claims that it too works through "benign sensory negation -- 'deflection' -- in electronic media. Such deflective media strive to subtract all stimulation." Bainbridge liked the idea of "taking over the home entertainment center," but he tweaked the exoptic concept somewhat. He doesn't want people to avert their eyes, but rather to pay the same peripheral attention they pay to music, which he refers to as "decorating the air." His aim is for "people to use video to shape a visual space the way music shapes a sonic space."

He made "Blind Heat" using analog audio/video synthesis, which dates back to Nam June Paik's work in the 1960s, but is rarely employed in these digital times. "The same electrical signals used to make sound can be used to make video, though not that many people know that," he says. "There's only one studio in the world dedicated to this kind of work that the public can use." He spent a week setting up the software, then "painted" the piece live, in real time, with a synthesizer.

"Blind Heat" is visual make-out music for people who prefer DJ Spooky to Sinatra. It sounds like stripped-down ambient, a drum machine subtly distorted and stretched. But "Blind Heat" doesn't look like other high-tech video art, which all too often resembles a software demonstration. It's more like a vaguely biological Abstract Expressionist painting dancing and marching to skittering rhythms.

I ask Mal and Bainbridge if they'd test-driven their video for its marketed purpose. Bainbridge composed "Blind Heat" with the inspiration and help of a girlfriend, but they broke up before he finished, so he's only shared the experience thus far with Mr. Left Hand. He thinks his solo session was enhanced by the video but admits it may have been because it made him think of his ex. Mal, married for 12 years, says he and his wife had unusually hot sex while the tape played beside their bed.

After we hang up, I turn my full, non-peripheral gaze to the screen, where vagina-shaped red blobs pulsate bigger and smaller to a vaguely martial snare drum. The red blobs alternate with black blobs, back and forth on a green background that looks sort of like tendons. After a few minutes, I decide the red blobs are penises despite their female shape and the black blobs are the corresponding holes, but I also see tissues or cells under a microscope. Clusters of white dots cast a slimy sheen on everything.

The images and sound vary slightly every time, but follow a basic pattern, a 23-second cycle. (I know I'm not using the video sexily enough when Bainbridge and Mal say later that the cycle's news to them; they haven't even timed the intervals.) Each cycle starts out pounding and fizzles into silence as a white lattice flutters down over the images. This shimmering curtain reminds me variously of lace, calcification, veins and orgasms. It keeps me thinking about bodies.

But the short cycles are the opposite of a build to orgasm, more like small waves that lap onto the shore and recede without ever cresting. Perhaps it's frustration with this aimlessness that's supposed to lead the audience to fool around. Perhaps the narrative arc toward climax is being negated or subtracted by this endless loop, which leads the couple (or self-lover) to fill in that blank.

At this point, lo and behold, I start to feel a little warm down there. Is it video-inspired lust? Boredom? Work ethic? Self-regard over my clever theorizing? I find I'm not sufficiently ashamed by any of those motivations to keep my pants on.

But once the exoptic devil has busied my idle hands, the video doesn't move me along. I try squinting, but then it just looks red and green and makes me think of Christmas -- whoa. Christmas not sexy: quick, reprogram! I shut my eyes, but then I'm listening for variations in the cycles, and the sound quickly becomes monotonous. Then I think about what Mal said about the video, specifically the "stroking my dick" part. That's better. Though I like "Blind Heat" as art, I find I actually have to tune it out in order to come. I don't think this is the next Viagra.

My friends Henry and June (not their real names) are even less convinced. Henry says the sound reminds him of "a relaxation record from the '70s" and the video was "kind of offensive. It looked a little bloody, like cells." June, a musician, said she wanted sounds more overtly sexy, like panting and moaning.

Both agreed that the looping hindered sex. "At first, the rhythm of it worked with what we were doing," June reports, "but after a while we wound down like clockwork. Making love didn't have the natural ending it usually does." Their session was shorter than usual and ended before the 45-minute tape was over; June says the sex was actually worse than usual.

She adds that the light flickering on Henry's skin "looked sort of cool, but not nearly as nice as candlelight." Bainbridge also brings up fire in our interview, saying he wanted to "warm up the room visually. Fire was our first television, and I want to take the screen back to its roots. A campfire is not so enveloping you can't talk with the person beside you, and it's great to look at, but eventually you look at the person beside you and notice the light on them."

Bainbridge likes my comparison to waves, even though I (and June) found those rhythms stalling the climb toward orgasm. At least waves are natural and not overmediated like so much modern experience, Bainbridge says. "We're so far past the 'Plato's cave' shadow metaphor. Now it's like the Xeroxed, scanned JPG of the photograph of the shadow of the reflection on the cave wall. I was trying to reflect more the rhythms inside me that I associate with lovemaking or passion."

By trying to take sex back from its commodifiers, the project follows rabble-rousing avant-garde movements like dada and situationism. The playful gesture is generally the point in such tiny art "revolutions" and "Blind Heat" doesn't aspire to pornography, but still I wonder why the video didn't incite more lust, if only placebo lust.

Perhaps we should blame the media's genius at creating unquenchable desire -- we've been programmed to respond only to pornographic and advertising images. Or maybe, no matter how often we say we prefer the suggestive to the obvious, we're born needing human bodies (present, depicted or imagined) to reliably turn us on. Either way -- regardless of why we're so narrow sexually -- we're the opposite aesthetically, and especially diverse when it comes to abstract art. One man's electric campfire is another man's bloody cells.

Mal acknowledges the grand absurdity of his mission to cure TV numbness with arty videotapes, but he swears the project is no put-on. He is genuinely alarmed that "the sublime is being flattened by the ever-more-perfect relationship with media. Anyone can find something to entertain them and they could watch it forever. To respond to that, I thought, why not reverse the equation, come up with an aesthetics that would be deflective rather than attractive. And if it works, it would heighten sexual response, because it would create a negative space inside this flattened one-dimensional world."

Even if deflection doesn't globally overthrow attraction -- a fairly good possibility -- "Blind Heat" and Exoptic Fields' videos could work locally, Mal says. "Our product is made as something you exchange. Somebody hands the tape to someone and says, 'Here's a video that's made to make you look away.' Maybe the person laughs, but they also think about its opposite, about how most media works on you."