The hero who never looked down

The exemplar of everything good and bad about his time, John Lennon will forever loom over the unsettled legacy of an ambiguous age. 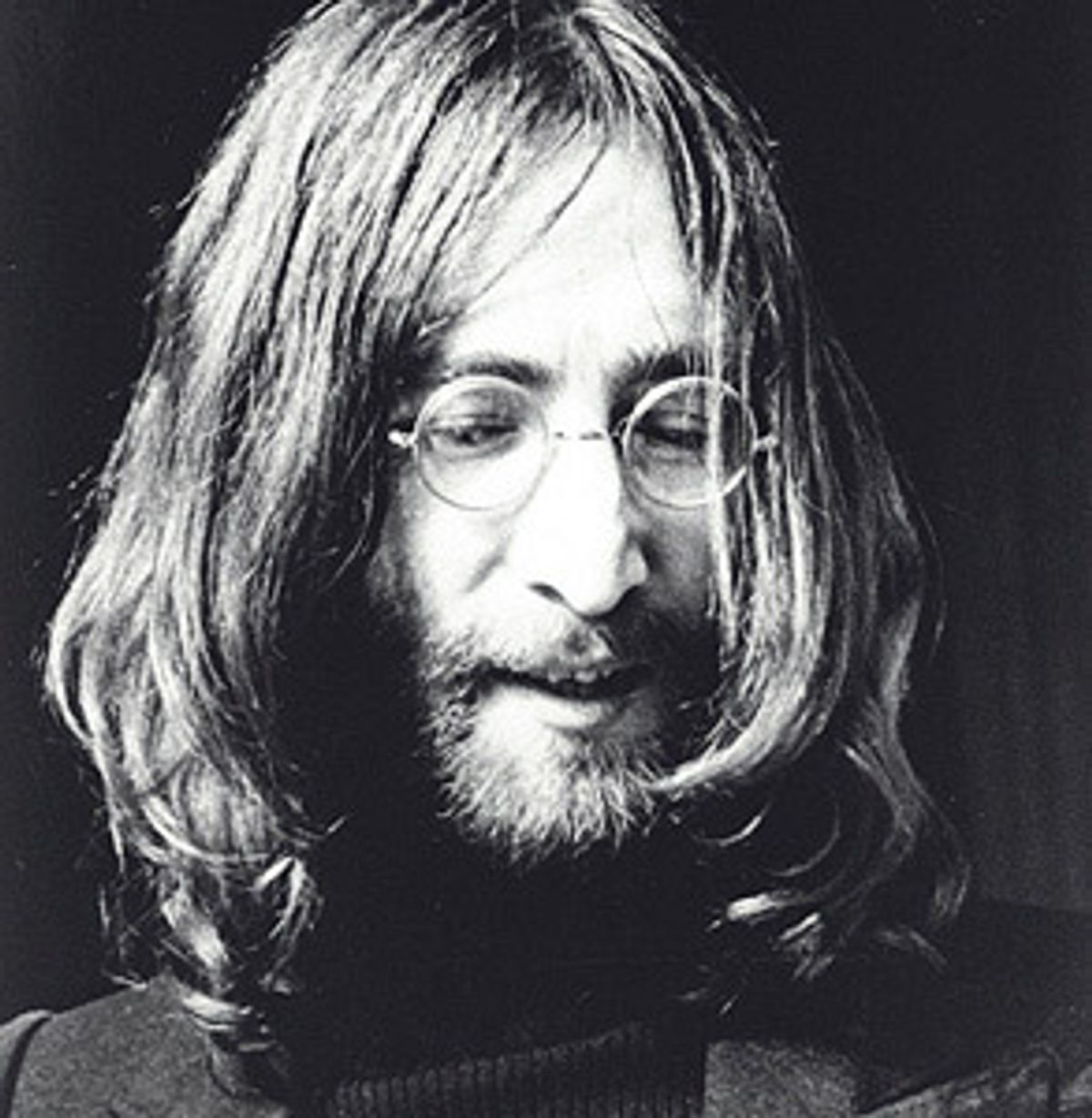 If there were any justice, it would have taken more than a gun to kill John Lennon. His enemies should have had to fight him with his own weapons, hand to hand, the way they do in the Iliad or Beowulf or the Song of Roland, all those tales in which the strong young king, the mighty in spirit, the proudest, the most reckless, the most potent dreamer, goes out into the world and sweeps all before him. They should have been forced to compose "Strawberry Fields Forever" and make a fortune at age 23 and screw everything that moved and write "Julia" and get churlishly drunk and live out every stupid and sublime '60s impulse and tell the royal family to rattle their jewelry and crank that Gibson Jumbo and hide behind a hundred hairstyles and get strung out and wail on "Twist and Shout" and bellyflop into mysticism and spend a public week in bed with Yoko and take acid in the face of everything and through it all create, sitting on the edge of a thousand hotel beds with a guitar, alone or with a brother named Paul, the most varied and memorable body of songs of our time. If they could do all that, then let them kill the man.

John Lennon a Homeric hero? A Hector? Why not? You really think Agamemnon was anything more than a muscleman? And who do you want, anyway? Picasso and Miles and Joyce are demigods, touched by the daemon -- it's hard to relate. Lennon was just a bloke from Liverpool who knew a bunch of barre chords, started out playing skiffle and Carl Perkins tunes and in a few years, with three friends, took pop music further than anyone has ever taken it before or since.

Think about this. In 1962, the Beatles were a very promising little rock 'n' roll band who had begun to develop a uniquely melodic sound, but they were still recording fluffy novelty-pop tracks like "Besame Mucho." Four years later, they went beyond Stockhausen. In 1966 they laid down a track on the epochal "Revolver," "Tomorrow Never Knows," that with its howling din of backwards-recorded guitars, droning tamboura, electronically doctored vocals, still-enigmatic tape loops and vortex-staring lyrics, is an artistic leap forward as prodigious as Georg Büchner's demented 1836 play "Wozzeck" or Miles' "Kind of Blue." And then the next year, with "Sgt. Pepper's Lonely Hearts Club Band," Lennon and the Beatles stormed the beachhead they had established, creating a work that to this day remains the most satisfying fusion of traditional rock songwriting and avant-garde exploration ever recorded.

That ought to be enough to make Lennon a hero. Even if he did later embrace Janovian screaming.

Lennon's -- and the Beatles' -- secret, the quality that gives him the air of someone at once utterly innocent and almost diabolically wise, was that he made it up as he went along. He never stopped to ask himself if he knew what he was doing; he never looked down. This brazen, self-propelling self-confidence, later to turn into explicit self-invention, inspires a visceral respect, verging on a sense of fealty, that feels anachronistic, a throwback to the primordial days when age -- whether accompanied by wisdom or not -- yielded in all things to hard, beautiful, heedless, destructive youth.

Watching Lennon in "A Hard Day's Night" or listening to him sing on, say, "You've Got to Hide Your Love Away" -- that precise, at times almost precious enunciation, with an edge like a jagged blade lurking beneath -- one feels the snap of a dangerous assurance. The impression, always, is of sheer force, tapped directly from the source. Of course, we know that beneath his smart-alecky cockiness Lennon was tormented by the demons of his unhappy childhood, but he hid them, harnessing them to his work.

But youthful arrogance alone is not enough to make Lennon heroic. Indeed, that arrogance bespeaks a side of Lennon that is far from attractive: He was a terrible father to his first son, Julian, and his bombastic proclamations and political posturings grew tiresome. Nor does his status as an icon of the '60s suffice. It's hard to say that he triumphed over that era's dead-ends and blandishments; rather, he was an exemplar of everything good and bad about that time. Nor, even, does his martyrdom -- although the bullets that ended Lennon's life ensured that he will forever loom like a ghost over the unsettled legacy of an ambiguous age.

Lennon is a hero to those of us of a certain age for two reasons: because of his work, and because we grew up with him. First and always, there is his work -- though really only that work done with the Beatles. Lennon's post-1970 explorations have moments of searing intensity and occasional beauty, but don't even come close to the songs he created and helped create with the Beatles. Lennon needed the Beatles, and in particular McCartney, like black needs white, gin needs tonic. Less tutored and advanced as a musician than Paul, though still a solid rhythm guitar player -- he once summed up his ability on the guitar by saying, if memory serves, "I can fucking make it howl and move" -- his rougher musical style perfectly complemented Paul's sometimes saccharine tendencies. John was a viciously smart writer; Paul's lyrics were often silly. On their own, neither of the two men was that special: Together, they were magnificent.

Who can forget the way John's plaintive yet uncannily authoritative voice undercuts Paul's high-pitched optimism on "We Can Work It Out," warning that "Life is very short"? Or the way his dirge-like evocation of his youth, "Strawberry Fields," balances Paul's soaring "Penny Lane"? In a thousand ways, they were a marriage of equals. The mere fact that Lennon and McCartney existed, came together and went down the road as far as they did, is one of those things that makes the universe seem fundamentally friendly.

And for a few years, along with Ringo and George, they played -- played in both senses of the word -- in view of the whole world. Perhaps nothing is more touching in the whole saga of the Beatles than the simple fact that these guys had so much damn fun together. Their story told us: You can change history and still just be in summer camp.

But the mere quality of Lennon's work doesn't explain why he's so important to so many. To have grown up with the Beatles, as the entire baby-boom generation did, was to live out a very strange love affair, at once intimate and one-sided. They were the world's most popular group, and they provided the soundtrack for millions of utterly personal moments -- an amazing phenomenon. Everyone owns the Beatles, because everyone has a thousand specific memories, sharp as the smell of wood smoke, in which the Beatles are in the room as surely as anyone else who was there: the joint smoked on that nervous afternoon in the cabin while "I'll Be Back Again" played on the KLH, smiling inside as the bass comes in on "Here Comes the Sun" after breaking up with a boyfriend. It is the sheer accretion, the thousands of hours of those experiences, that binds the Beatles to their fans.

And it was the weight of those memories that made so many of us feel, on that December day so long ago, that part of us had died with John -- that youth itself, a certain kind of innocence, tinsel-wrapped and hopeful, had passed forever. To this day, for me, no one has ever died as emphatically as Lennon did. His death brought death home: If John Lennon could die, that frightening crack in the middle of existence must be real.

It's hard for those of us who loved the Beatles to get past John's death, because it's so inextricably tangled up with loss itself. But then you walk over to the stereo and put on "And Your Bird Can Sing," or "She Said She Said," and that voice blasts out, at once brutal and joyous, wounded and uncaring, like a cavalry trumpet echoing down over a tired line of soldiers, and you shake it off and get up, following it back to the place where we all won so long ago, the place where we all win.