Have yourself a merry little Festivus

And let the airing of grievances begin! 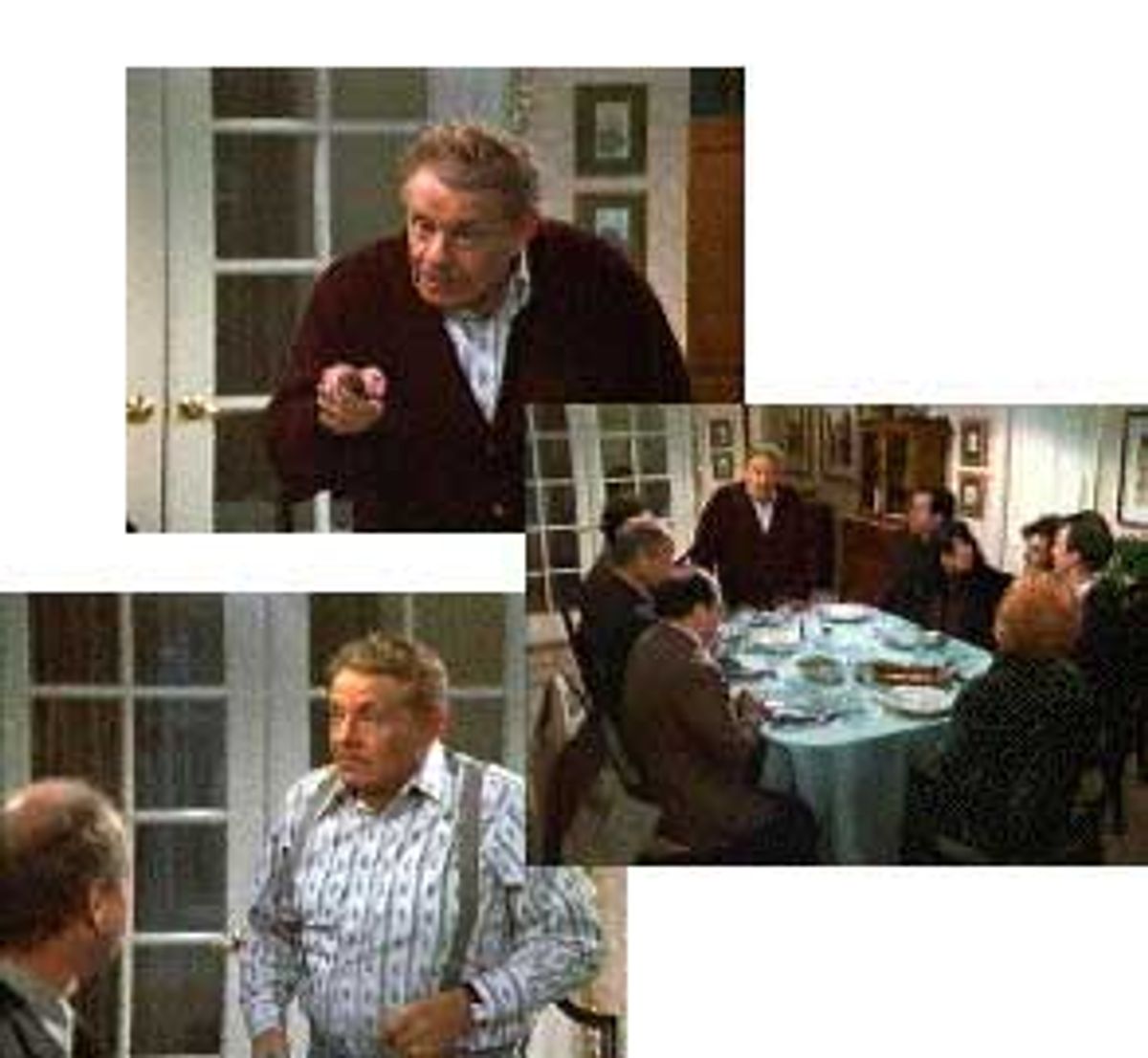 Can you believe Festivus is almost here? Where has the year gone?

As some of you know, Festivus -- celebrated on Dec. 23 -- is the holiest day in the "Seinfeld" religion. And we're not talking about Judaism. Festivus was started by Frank Costanza, George's irritable father, as a protest against the commercialization of Christmas, and was first explained in the episode called "The Strike" (Dec. 18, 1997):

Frank: Many Christmases ago, I went to buy a doll for my son. I reached for the last one they had -- but so did another man. As I rained blows upon him, I realized there had to be another way.
Kramer: What happened to the doll?
Frank: It was destroyed. But out of that, a new holiday was born -- a Festivus for the rest of us!

Christmas has the tree. Chanukah has the menorah. Festivus has the pole, which, according to Frank, must be tall, skinny, aluminum and devoid of tinsel (too distracting) and have a very high strength-to-weight ratio. On the evening of Festivus, Frank presides over the traditional "airing of grievances," in which family members share all the ways they have disappointed one another over the past year. And then it's time for Frank to show George who's boss by challenging him to "the feats of strength."

In the spirit of Festivus, I now air my own, somewhat TV-related, grievances. As Frank put it so eloquently in that immortal "Seinfeld" episode three Festivuses ago, "I got a lot of problems with you people! And now you're gonna hear about it!"

Ben & Jerry's Special Edition Festivus ice cream. Weren't those ice cream makers listening when Frank set down the basic tenets of Festivus? No commercialism. No frills. No tinsel. And certainly no cinnamon and brown sugar ice cream laced with gingerbread cookie bits! Festivus shouldn't be treated like some flavor of the month! And would it have killed them to put some chocolate in it?

Republicans. Don't get me started. They staged a third world coup, but in the tons of hot air that has emanated from the TV since Nov. 7, nobody has been allowed to make that point. Instead, MSNBC's idea of "balanced" coverage is Chris Matthews spraying spittle and invective all over some poor Democratic schmuck, whom you can't even hear anyway over Matthews' bull-elephant bellowing. And then there's the Fox News Channel ("We distort -- you decide"), but, like I said, don't get me started.

Hillary was right -- there is a vast right-wing conspiracy! And it's even infiltrating the White House -- President Bartlet's White House. Why, oh why, did Aaron Sorkin have to go and wreck the cozy liberal Democratic fantasy that is "The West Wing" by adding that prissy blond Republican babe to the cast and having her flit around with her pert nose in the air, scolding Democrats for being "elitist"? Oh, wait -- she's going to end up in bed with Rob Lowe, isn't she? Tee-hee. Never mind.

Regis Philbin's female trouble. He's so desperate to have a female win big on "Who Wants to Be a Millionaire," he has started to give the women contestants hints. Really! Haven't you noticed how his whole body language changes when there's a woman in the hot seat? He leans forward and coddles her, coaxing her to talk about her choices to the point where he's leading her by the hand. Stop it, Regis! It's not your fault that women suck at this game. A female contestant can't win if she can't get into the hot seat, and women can't seem to buzz in fast enough to qualify in the fastest-finger round -- probably because we haven't had enough reflex-honing practice sitting around in our underwear playing Nintendo for hours.

Still, that's no excuse for the embarrassing performance of many of the women who do make it into the hot seat. Unlike the gutsier male players, women play the game too cautiously, blowing their lifelines on answers they think they know but, oh gee, they're not 110 percent sure they know. Or they crap out on the baby questions because they've been living in a cave for their whole frickin' lives! Take the contestant who had to use a lifeline on the $200 question "Buddy, can you spare a (blank)?" And then she stared at the $300 question ("Where would you find a tome?") for hours -- until she answered "hardware store." There's no excuse for that, no excuse at all. We just suck.

David E. Kelley's school daze. Having created "Ally McBeal," a show about a workplace that's basically an extension of high school, Kelley must have felt uniquely qualified to do a series that was actually set in a high school. But what's suitable for "Ally," a surreal, comic fantasia of adults acting on impulse, is staggeringly inappropriate for "Boston Public," a surreal, comic fantasia of teenagers acting on impulse and the teachers who hate them for it.

"Boston Public" is high school from the perspective of a staff under siege. The kids are portrayed as thugs, Lolitas or packs of wild animals. The adults grouse about not being able to take disciplinary action because the students have "rights." Comic relief is chiefly provided by buffoonish teachers Milton Buttle (Joey Slotnick) and Harvey Lipschultz (Fyvush Finkel) -- their names say it all. To deflect potential criticism from teachers unions for portraying public school educators as hapless burnouts, Kelley gives us decent, no-nonsense principal Steven Harper (Chi McBride) and idealistic, caring history teacher Lauren Davis (Jessalyn Gilsig), and has them poignantly commiserate with each other about how undervalued they are by society.

But Kelley isn't fooling anybody. "Boston Public" has something to offend everyone who ever went to public high school (hmm, I wonder if Kelley did?) or taught public high school. First of all, someone should remind Kelley that Boston doesn't really need the old wounds of forced busing reopened by having bow-tied octogenarian Lipschultz deride black students as "de-segs." Someone should also remind Kelley that a teacher who brings a gun to class and fires three rounds to scare the students into behaving, as teacher Harry Senate (Nicky Katt) did in the pilot episode (a scene that fell flat as both satire and commentary), would be arrested faster than you can say "Columbine."

But perhaps I'm nitpicking. The bigger issue is that "Boston Public" paints the worst possible picture of public education. It's a mean-spirited, humiliating show; its glib, sensationalistic moments negate the impact of the "inspiring" bones Kelley throws to teachers. "The monster we battle every day is disrespect," Lauren observed in one episode, and how Kelley had the chutzpah to even write that line is beyond me.

Raining on my parade. NBC's broadcast of the Macy's Thanksgiving Day Parade was not a parade. Where I come from, a parade consists of people marching.

There was no actual marching during NBC's coverage. There was no footage of legs moving up and down or trombone slides going in and out. I'm sure there was some real parading going on in New York -- otherwise, how would all those bands and floats and balloons have gotten from 77th Street to Seventh Avenue? During the hour and a half that I watched NBC's taped West Coast coverage, I saw a lot of scenes from Broadway musicals (note to self: must avoid "Seussical" at all cost), a lot of teen-pop idols and country singers lip-syncing songs and Al Roker doing sideline interviews with NBC stars. But I could discern only the faintest glimpse of forward motion behind Katie Couric and Matt Lauer in the broadcast booth, and only the underbellies of the balloons whenever Roker was kind enough to move his enormous head out of the way.

This was a depressing comedown from the Thanksgiving parade telecasts of my childhood, in which the cameras stayed on the marchers and off the faces of the TV hosts. But there you have it -- another holiday ruined by corporate greed and commercialism. Long live Festivus!

Listen up, readers: Mister Rogers is not dead. He was not a CIA killing machine during the Korean War. He does not have military tattoos up and down his arms that he hides by wearing cardigan sweaters. Those are all urban legends, just like the ones about the rat in the bucket of Kentucky Fried Chicken and the poodle in the microwave. So, for cryin' out loud, please stop sending me e-mails asking me if this crap is true! To recap: Mister Rogers. Alive. Not dead.

Now, who's up for some feats of strength?