What kind of man lurks in dark, steamy jungles studying the insects he finds on corpses? It's all in a night's work when you're a forensic entomologist. 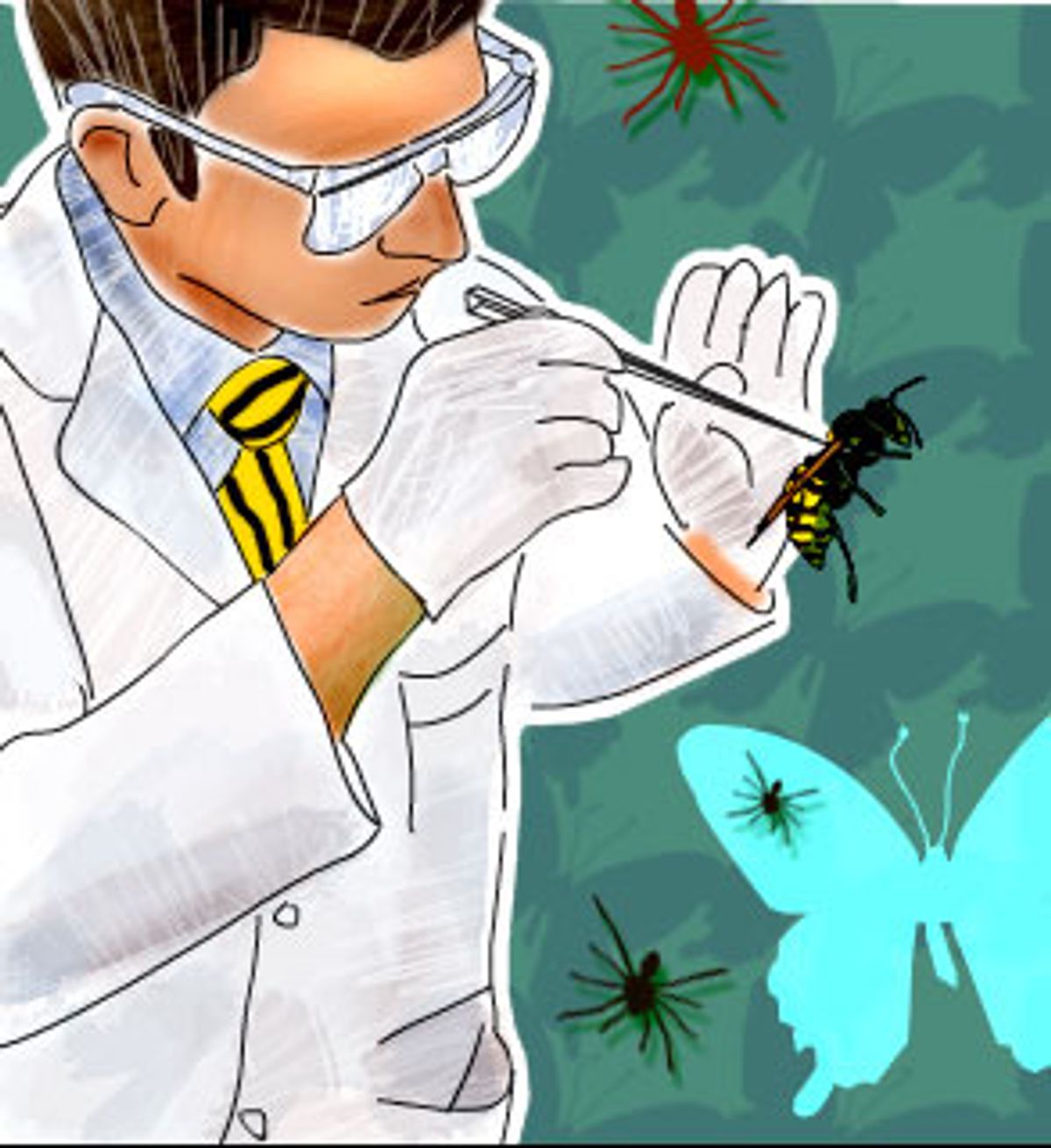 On a still Hawaii morning, a telephone rings, cutting through the silence; a body has been found dumped in a sugar cane field. M. Lee Goff dresses, gathers his kit and drives to the crime scene to collect maggots, beetles and other insect species from the decomposing corpse. Goff's movements are practiced, like a ritual; his hands are quick and confident. He has done this many times before.

A forensic entomologist at the University of Hawaii at Manoa on the island of Oahu, Goff uses insect evidence to help police and medical examiners solve crimes. He is one of only a handful of forensic entomologists actively working in the field and conducting forensic research studies -- he calls the group the "Dirty Dozen." In Goff's recently published book, "A Fly for the Prosecution: How Insect Evidence Helps Solve Crimes," he outlines some common methods and applications of forensic entomology.

The number of forensic entomologists working with investigators is small because insects are involved in relatively few cases, Goff says. "You've got a limited period of time during the year when insects get involved," he says. "Some years I'll do about 10 or 11 cases, and other years it will be about 20 or 25." Despite variations from one year to the next, the average number of cases has increased over time, Goff says, as medical examiners and police have slowly begun to accept his sampling methods.

Goff first learned of forensic entomology in 1983 while attending a seminar about insect evidence and murder investigations as a young mite specialist. Intrigued, Goff contacted the local medical examiner and offered assistance whenever he heard about a suspicious death involving a badly decomposed body.

When the slick, humid rain forest offers up another bloated murder victim, Goff pulls on his boots and heads out with specimen-collecting gear in hand, eager to find some meaning in the insects that have made a home of the body.

It has taken many years for conventional crime investigators to accept forensic entomology as a useful tool, Goff says. "You are very much like a circus sideshow," he says. As "an academic coming into a typical crime scene, you don't necessarily think the same way [as the police]."

Depending on the species collected at the scene and their stages of development, insects can be used to establish several things about a body after death. Most commonly, forensic entomology is used to determine the postmortem interval, or the time between the death and the discovery of the body, but it also can help establish whether the body was moved after death and if poisons, drugs or toxins were involved. Further, since the advent of sensitive DNA testing, blood collected from the intestinal tracts of insects at the crime scene has been used to identify rape and murder suspects.

Goff usually finds numerous species of insects at a crime scene: blowflies, flesh flies and black soldier flies; moths, wasps, ants and mites; beetles, spiders and scorpions. Each species plays a unique and characteristic role in the decomposition of a body, he says. Flies are the first to arrive; attracted early by the smell of decomposition, they colonize soft parts of the corpse -- like open wounds or the ears, mouth, nose and eyes. Next are the social insects such as predatory ants and wasps, which wait until after the maggots and flies on which they feed have settled in the body. Others, like the lumbering hide beetle, wait to feed on the cartilage and dried tissue that remain after most of the other species are gone.

This pattern, with different species invading the body in distinct waves, is called succession, a predictable enough phenomenon for Goff to use in establishing the postmortem interval.

Goff recalls a case from November 1996 in which the body of a young woman was found in a sugar cane field on the island of Kauai. "The body was very decomposed and not a lot of physical evidence remained," he says. But using samples of insect evidence he collected, Goff estimated a postmortem interval of 34 to 36 days. "They didn't have any suspects, but they did have one individual who said he had given the lady a ride 33 days ago," he says. On the basis of Goff's information, police obtained a search warrant and searched the individual's home but found nothing suspicious. "Finally," Goff says, "they went in and sprayed luminol," a compound that glows when it binds to hemoglobin in the blood. After police sprayed the house, the outline of a body was clearly visible on the floor of the bedroom. There were traces of blood in other rooms too, left when the suspect dragged the body through the house to his car. "The trunk of his car just glowed," Goff says.

During the trial, the jury heard the entomological evidence despite the defense attorney's efforts to suppress Goff's findings, query the validity of the search warrant and discount the luminol evidence. The suspect was found guilty of murder. As with many other cases, this one probably would have been solved in time. "But it's a matter of when it would have been solved," Goff says.

Once on the scene, Goff collects samples of every insect developmental stage present -- eggs, maggots, pupae and adults -- taking them back to his laboratory for identification, preservation and hatching. He incubates samples of maggots and pupae under suitable conditions, noting how long it takes for adult insects to emerge, and uses the results to date the time of death. Armed with photos from the scene, insect and weather data and pig decomposition studies as a reference, he calculates the time required for the body to reach the state of decomposition in which it was found, estimating the postmortem interval.

Without pig studies to provide clues to patterns of insect activity, very little of Goff's work would be possible. With characteristic bluntness, he writes of an early investigation: "Since I was attempting to duplicate a homicide, in one of my first studies I wanted to shoot each pig through the head with a 38-caliber pistol." Which he did.

To duplicate insect activity found in beached drowning victims, Goff threw dead pigs into the sea; he also strung up dead pigs in trees to imitate suicide by hanging, wrapped them in blankets to re-create concealed bodies and mimicked arson victims by dousing pigs in gasoline and setting them alight.

"It is disconcerting to be collecting maggots from one end of a pig and look up to find a mongoose eating at the other end," Goff writes in his book, helpfully reminding readers to make sure the decomposing pig is sufficiently protected from noninsect predators. While carrying out a pig decomposition study, Goff visits the study site several times each night to monitor insect activity.

Although Goff's research may sound like bad news for pigs, the decomposition studies provide him with invaluable archival data to compare with insect evidence found in criminal cases. With that data, he can extrapolate a postmortem interval to within a few hours, and he has frequently provided courtroom testimony discounting or supporting a suspect's alibi.

Goff's work takes him annually to the FBI Academy in Quantico, Va., where he teaches part of a weeklong course on the detection and discovery of human remains. He also travels extensively, investigating cases on the mainland and teaching training sessions worldwide. But Goff always returns to Hawaii, eager to conduct further studies to better understand the role of insects in decomposition. "I think I've got a lot more questions now than when I started," he says.

In Oahu's tropical environment Goff has found the perfect place to answer some of them. As night gathers and the tangled knots of vegetation tighten in the faltering light, the air becomes alive with insects.

A fecund and secretive place, the forest is like a machine, and as with all machines, it requires fuel to thrive. The same is true of the orderly sugar cane fields, the lazy coastal towns, the inland cities and almost any other environment. Dead organic matter is the fuel that drives any ecosystem, and insects, toiling away unseen, are the tools with which it is broken down and returned to the soil. "The whole pattern, the whole puzzle, is so complex and so intriguing," Goff says. "These are very complex systems, and we're part of it, sometimes in ways we don't want to be."

In several of Goff's decomposition studies, insects began to colonize corpses within 10 minutes; and in some of his more gruesome studies, they did not even wait for death to occur before beginning to feed. His vivid descriptions of murder victims as centers of frantic insect activity are a reminder that we are just animals, as available and irresistible as roadkill to a passing blowfly.