Wonder Woman has a new artist -- a gay kid who grew up in the projects. 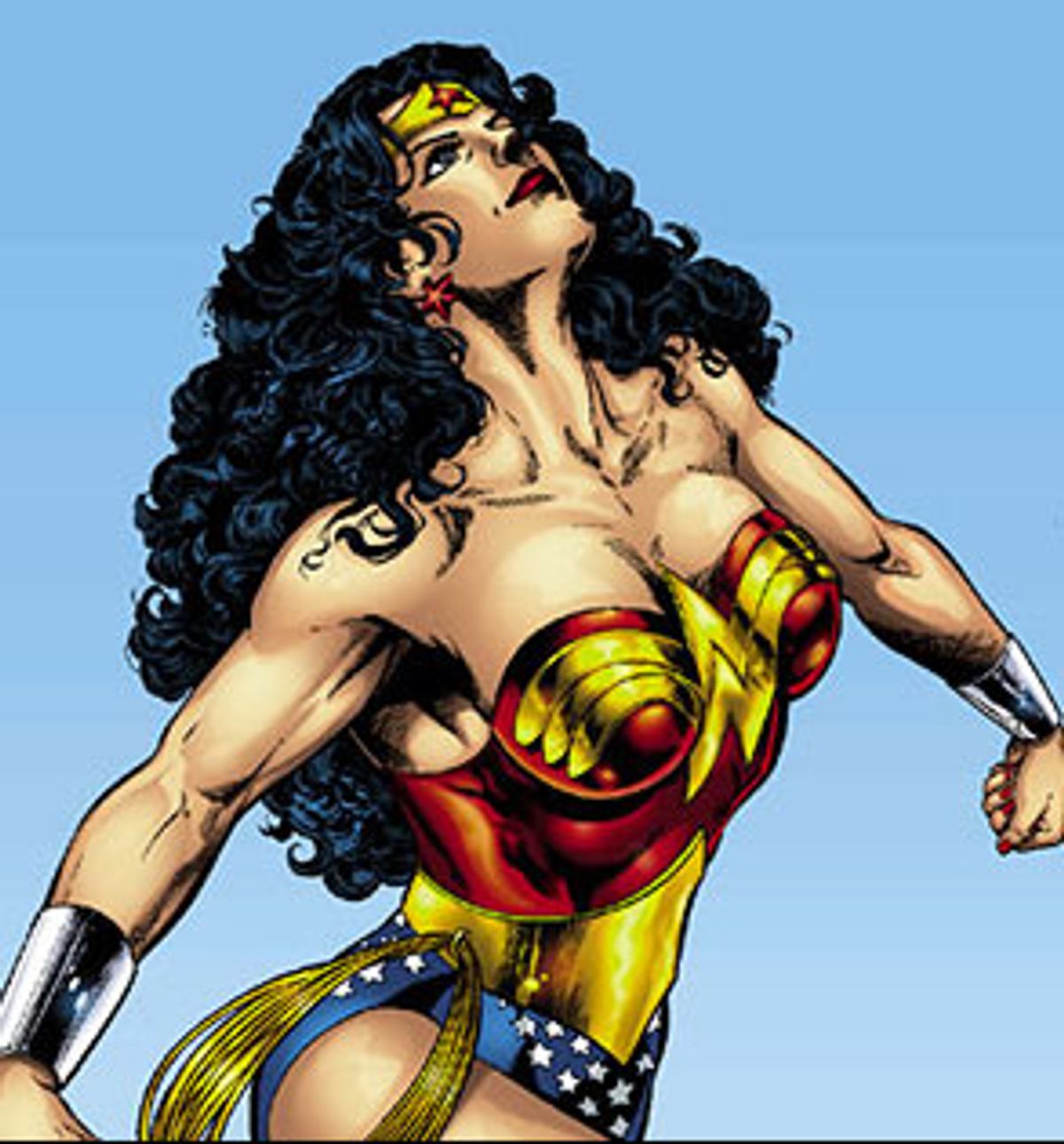 Robert Downey Jr.'s pharmaceutical fall from grace had a delectable footnote: Found in his Palm Springs, Calif., drug pad was a Wonder Woman costume, apparently worn by a hastily departed female consort. What better proof of the longevity of a comic-book icon?

Wonder Woman debuted in All-Star Comics No. 8 in December 1941, but was inexplicably unable to prevent the Pearl Harbor invasion. Over the ensuing decades, this cartoon sexpot has excited adolescent minds -- both male and female -- in a way '50s pinup Betty Page never could.

And 2001 may be the biggest year yet for the babe in the star-spangled girdle. A new book, "Wonder Woman: The Complete History" by Les Daniels and Chip Kidd, is an oversize, art-heavy tome that reminds us that for sheer fetishism alone, comic books are as potent as Playboy. A Wonder Woman live-action film is under development by producer Joel Silver; Sandra Bullock and Mariah Carey have been mentioned as possible stars.

And now, a few months shy of her 60th anniversary, Wonder Woman has a new artist guiding her destiny at DC Comics: a devoted fan whom she inspired to escape a life in the slums.

Wonder Woman, Phil Jimenez says, changed his life -- and he wants to return the favor. His personal tale is more unlikely than any superhero plot: As a kid living in government-funded housing in Orange County, Calif., Jimenez saw comic books as his escape from a dead-end childhood. If Wonder Woman could better the world in her pursuit of truth, Jimenez figured, he could tap into that energy. He moved to New York and eventually ended up nabbing the much-coveted spot of drawing his beloved inspiration at the precocious age of 30.

Of course, it is true that in one sense comic books are merely the talismans of continuing generations of emotionally and sexually stunted nerds who come out in force to crowd their favorite artists at suburban comics conventions. But for some, like Jimenez, comic books forge a path to self-actualization.

And in the film "Unbreakable," M. Night Shyamalan's muddled but ambitious follow-up to the wildly successful "The Sixth Sense," the director depicts the obsessions of a comic-book collector (Samuel L. Jackson). Crippled by a congenital disease, the man searches for a real-life superhero, who may or may not be Bruce Willis.

Back in the late 1980s, when Jimenez was coping with a childhood on welfare, he sought solace in fantasy. And like Chabon's teenage Clay, cartoon superheroes also unleashed the gay boy inside.

Wonder Woman -- a defiant Amazon from a female Utopia called Paradise Island -- was created by a pop psychologist named William Moulton Marston, who wrote under the pseudonym Charles Moulton. (He also invented the polygraph.) Marston, unlike naysayers of the era, saw educational value in the proletariat art of comics and lobbied on their behalf. A scholar of mythology, Marston endowed his lass with the wisdom of the gods, even as she ran about in a scanty costume. A backlash came in 1943, according to Daniels and Kidd's book, when a horny soldier wrote to praise the buxom crime fighter and her magic lasso, which had stirred thoughts of sexual bondage. Marston was ordered to tone down his character. The next year, one of his colleagues resigned, bristling at the still-potent sexual symbolism.

Jimenez was entranced by the character; he spent hours alone sketching her. While immune to her sexual charms, Jimenez was inspired by her mission: to pacify warlike men and achieve world peace. This superhero, he decided, could play a role in his salvation too. He hatched a scheme: He would go to college in New York to learn comic-book illustration, then work on Wonder Woman at DC Comics.

Beneath these pop-color daydreams, however, lay a desperate motive: "If I did all these things and accomplished all these goals, then maybe being gay would be OK with my family." In 1989, at 19, Jimenez enrolled in New York's School of Visual Arts, studying under legendary cartoonist Will Eisner, who wedded film noir to comics with "The Spirit" series. But after two years, Jimenez's funds ran out, ending his education.

Great Hera! Three weeks after leaving school, Jimenez sent in some drawings to DC Comics -- and was hired. His boss was a man named Neil Pozner, whose mandate as the company's new "talent director" was to groom novices. The muscled, goateed Pozner was Jimenez's first real-life superhero. "When I saw him, I fell instantly in love." But still closeted, Jimenez held his tongue, channeling his sexual energy into the "Teen Titans" and "Robin" series.

Even at a mere age 20, years of voracious comic-book collecting and drawing had honed Jimenez's talents. The '90s were a boom time for the art; comic books had matured from one-dimensional cotton-candy tales into visually striking (and often too earnest) "graphic novels." "Maus," Art Spiegelman's Pulitzer-winning Holocaust tale, had upped their cachet. By the '90s, comic-book artwork had outgrown its restrictive square panels, and had broken free of puerile subject matter.

Marvel, the country's largest and most successful comic-book producer, had used antihero plotlines in the '60s with the mournful Silver Surfer, but by the '90s virtually all the successful heroes were twisted characters. Batman was reimagined as the brooding, homicidal "Dark Knight," light-years away from Adam West's campy portrayal. DC Comics, Marvel's biggest competitor, actually killed off a latter-day Robin. Urban ills, racial tensions and the threat of nuclear holocaust had replaced everyday tales of mad geniuses and testy aliens. Gays and lesbians were also introduced, albeit as secondary characters.

Pozner played mentor to Jimenez's moon-eyed protégé. After two years, Jimenez was eventually assigned to another editor; only then did he summon the courage to ask his former boss on a lunch date. Pozner hesitated; Jimenez was 15 years younger. But Jimenez persisted, and the two became a couple.

Wonder Woman, alas, had no power over the next episode: Pozner, who was HIV positive, fell mortally ill. It was 1994, and at age 23, Jimenez became a widower.

Jimenez carried on, numbly. His four-issue "Aqualad" miniseries, called "Tempest," was nominated for a 1996 Eisner -- an award named for his School of Visual Arts professor -- and made comic-book history when Jimenez dedicated the work to his late lover. His candor touched off a flood of letters from young readers taking baby steps out of the closet.

Jimenez was a gay-rights champion at 26 -- and an industry anomaly. "The queer cartoonists I know in the mainstream [i.e., DC and Marvel] all complain about their lack of control over the work they do and how often they have to bend to the het-white-boy party line," says Jennifer Camper, cartoonist of the defiantly dykey strip "Subgurlz."

A tumultuous 1999 was the turning point. He began a new relationship -- with film director Jim Fall, known for the urban queer fable "Trick." Fall persuaded Jimenez to return to California, his much-loathed homeland.

"It was ill-conceived," Jimenez now admits. "It all crumbled." Within six months, the relationship had imploded, Jimenez's grandmother had suffered a heart attack and the artist himself had developed diabetes. Jimenez escaped into his trusty comic-book world. When he emerged, he had conjured up 12 stories about Wonder Woman, and he sent them to DC for consideration.

The company gave him a 12-book Wonder Woman assignment.

Peers cheered the decision, feeling Jimenez had paid his dues. "Phil is a rare combination of diehard comics geek, talented artist and exuberantly out gay man," said Joan Hilty, a DC editor and one of the few women in the mainstream comics game. "This gives him street creds and social skills!"

But DC insisted on three co-writers, wary of allowing its wunderkind a solo flight. (One is George Perez, whose Wonder Woman work in the mid-'80s is considered a high point in her legend.) Jimenez's debut issue, "Wonder Woman No. 164," hit newsstands on Nov. 29. "Gods of Gotham Part 1: Discordia" presents a mammoth rumble among Wonder Woman, Batman and their worst nemeses.

Jimenez has fashioned a Wonder Woman for the millennium. To keep lusty fans happy, her statuesque and buffed frame is clad in a whisper of a costume. But this year's model will also exhibit the qualities Jimenez revered as a teen: wisdom, conviction and gobsmacking powers descended from the gods.

Trina Robbins is a veteran comic book writer and artist, the author of a new history of female cartoonists and characters, "From Girls to Grrrlz," and the writer of a 1998 Wonder Woman graphic novel, "The Once and Future Story." She remains skeptical; for the past decade, she has hated DC Comics' depictions of Wonder Woman, feeling they reached a nadir with the mid-'90s big-breasted renderings by Mike Deodato. Robbins said, "I've picked up the occasional copy, sighed and put it down."

The legacy of Pozner is never far from Jimenez's work. "I firmly believe that I have a responsibility as an out gay person to be political and to use my work in a political way," he says with irony-free earnestness. Women's rights and racial issues will figure in future plots along with gay themes.

He will restore one long-neglected story line: romance. Wonder Woman has been single for the past 15 years, since the end of her 40-year relationship with pilot Steve Trevor. While her battle cry of "Suffering Sappho!" fueled speculation about her sexuality for generations and made her a pre-Xena lesbian icon, Jimenez will grant Wonder Woman a new boyfriend.

Sitting in the catbird seat of the comic-book world, Jimenez remains refreshingly guileless. At a midtown Manhattan signing in late November, he warmly greeted scores of fans who could be slammed for forgetting to get a life. Better-known artists, he said, too often exhibit an unwarranted haughtiness toward fans. "The strange thing about my industry is how so many people are unpleasant," he lamented. "We're comic-book people; we're not that important."

Jay Blotcher, a New York-based journalist, is producer of an upcoming documentary about the disco star Sylvester.