The director of "The Cider House Rules" returns with Juliette Binoche, Johnny Depp and a cozy little ode to sensual and culinary pleasure. 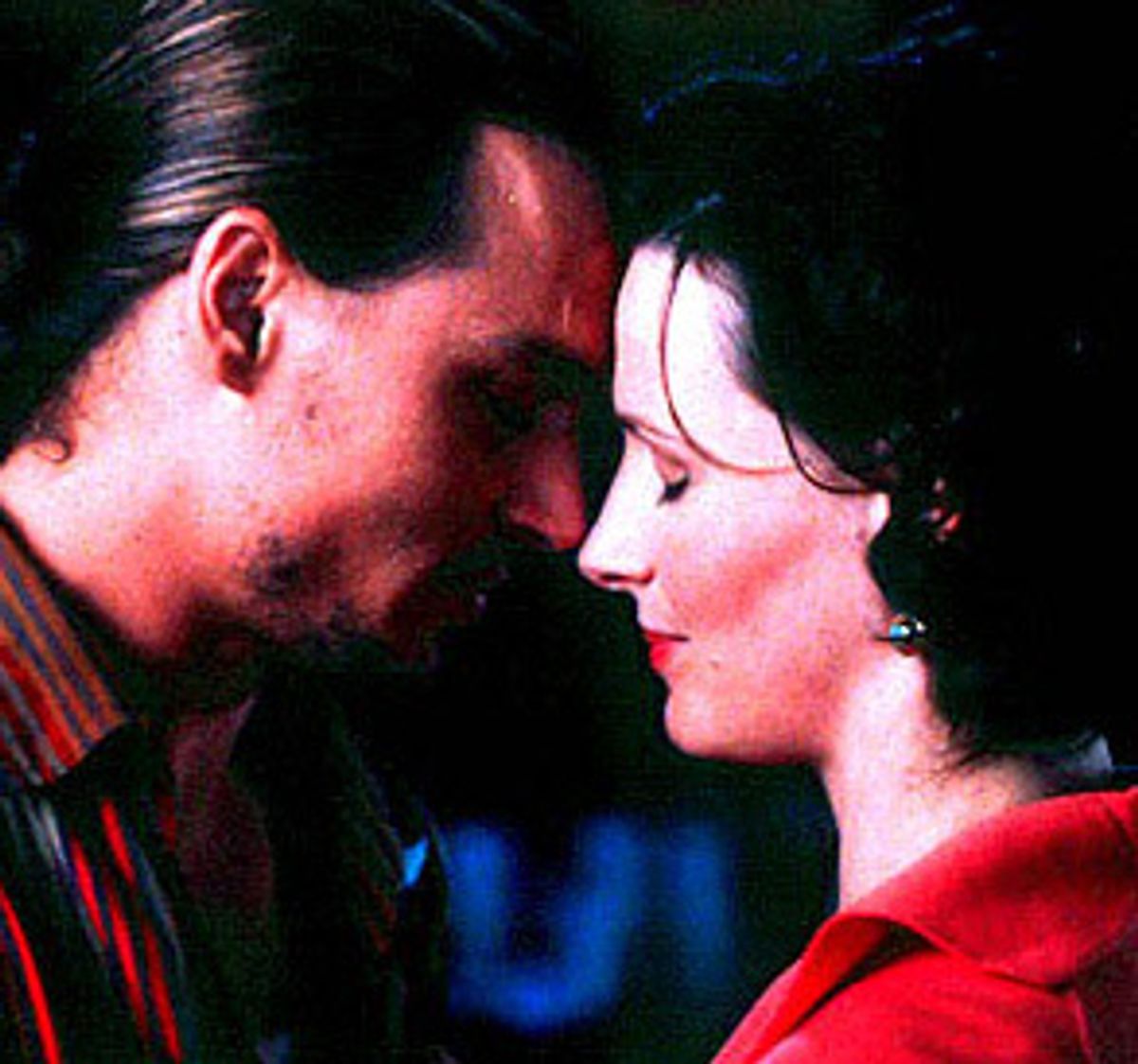 The simplistic confrontation between pleasure and repression that's at the heart of Lasse Hallström's gentle, comic fable "Chocolat" shouldn't obscure the fact that the movie is very well made. In "What's Eating Gilbert Grape" Hallström had shown real sensitivity for directing actors. But last year's "The Cider House Rules" was a leap of craftsmanship. Hallström's adaptation of John Irving's novel was as emotionally satisfying a piece of classical Hollywood filmmaking as anything since the heyday of William Wyler ("The Best Years of Our Lives," "The Heiress," "The Letter"), the master of what used to be called "invisible craft" and a popular filmmaker of incomparable taste.

"The Cider House Rules" was suffused with emotion that was never cheapened into sentimentality; there was an irreducible toughness at its core, a respect for the characters as well as the audience. Combining a story that went for years with an unswerving focus on the people in front of the camera, Hallström achieved what might be termed intimate sweep.

"Chocolat" isn't the follow-up you'd hope for, but the care with which it has been made, its ability to provoke emotion without stooping to jerking tears, suggests that Hallström may be one of our best hopes for accessible, intelligent mainstream movies. The main problem here is that Hallström's source material, the novel by Joanne Harris, doesn't offer possibilities as rich as the narrative sprawl of Irving's imitation 19th century novel. The book doesn't even feel substantial enough to sustain its 200 or so pages; you get the point early on and, from the characters she introduces, predict exactly how she'll go about making it.

It's not hard to see why it would garner affection, though. A mixture of romance novel, mother-daughter weepie, travelogue and cookbook, the book pays just enough attention to sensual delight for readers to feel they're having a tastefully saucy good time. For predictable trash (with a literary veneer) Harris' novel is agreeable enough, something to pick up between "Travel and Leisure" and the latest Williams-Sonoma catalog.

Set in 1960, "Chocolat" tells the story of Vianne (Juliette Binoche), an unwed mother who, with her young daughter, Anouk (Victoire Thivosol), travels from town to town. Sometimes it's a whim that ignites her wanderlust, sometimes it's the disapproving locals. The latter are particularly restless in the rural French village where, at the movie's start, Vianne and Anouk turn up and rent out a patisserie that they turn into a gussied-up chocolate shop.

Vianne entices the locals by giving them free samples of what she intuits are their favorite candies. Pretty soon this proto-Godiva has become a hangout for the village outcasts, primarily Armande (Judi Dench), an old woman whose proper daughter (Carrie-Anne Moss) disapproves of her, and Josephine (Lena Olin) who leaves her abusive cafe-owner husband (Peter Stormare) to become Vianne's assistant. The shop has also attracted the attention of Reynaud (Alfred Molina), the town's mayor (its priest in the novel), who's appalled that Vianne is an unwed mother, that she doesn't go to church, that she has opened the shop during Lent and that her incitements to pleasure undermine the strictly observed morality that's the basis of his power.

From there, I think you can do the math. "Chocolat" is about how the locals come close to breaking Vianne but how her dedication to sensual delight eventually triumphs over all. It's the sort of cozy little ode to pleasure in which nothing much is really at stake, so the audience can leave congratulating itself on its liberality and sophistication. What turns me off is the combination of simple-mindedness and self-satisfaction.

That said, "Chocolat" could be a lot worse. Even the most potentially melodramatic scenes -- Armande's secret meetings with the grandson (Aurelien Parent Koenig) her daughter doesn't want her to see, or a moment of panic when Vianne fears that something terrible has happened to Anouk -- achieve their effects without putting the screws to the audience. You can dislike the material and still feel respect for Hallström's restraint, for the deftness with which he handles the interactions of the various characters.

And his talent for directing actors merits a good deal more than respect. Some good actors don't escape the strictures of their roles here. Molina isn't required to do more than show his disapproving walrus face; I wish he hadn't been required to roll like a pig in chocolate in the movie's climax. Others sail right past them. Dench has been so praised -- Oscar, honored by the queen -- that she's on her way to achieving that international treasure status where actors barely have to do anything to be lauded. Luckily, she's got the instincts of a working actor -- one who just happens to be a master.

Armande is one of those crusty on the outside, soft on the inside old-codger roles. Dench feels crusty all the way through -- even her expressions of affection carry the implicit warning "Don't push it." She has a great moment when Vianne persuades her to try a mug of hot chocolate with chili powder. Dench sniffs at the concoction suspiciously, then takes a sip and momentarily forgets herself by emitting -- and then abruptly cutting off -- an earthy chuckle that sounds as if it were coming up through a crack in the earth from Satan himself.

The movie provides an unlikely charming couple in John Wood as a man whose only companion is his dog and Leslie Caron as the long-grieving war widow he falls for. Wood's hair flies away from his skull in curly wings and it somehow lightens him, makes him into a dear fool. (He looks a little like Ed Wynn.) The poignancy of Caron is that, approaching 70, she has never lost her gamin looks. The pair of them suggest Shakespearean lovers under a spell that turns back the clock. If only they were allotted the screen time to shine.

Johnny Depp, as an Irish vagabond gypsy whom Vianne becomes involved with (and sets the locals' tongues clacking even louder), has a laid-back sexiness that keeps the movie from feeling too cushy. Depp can fool you into thinking he's not doing anything, but if you've got liquid eyes that take in a woman the way he takes in Binoche, that's enough. And Binoche gives a confident star performance. She's presented to us as immaculately as one of Vianne's chocolates, done up as an icon of late-'50s glamour, almost always dressed in shades of red.

The role depends as much on Binoche's presence and charisma as on her acting abilities. Luckily, Binoche isn't just imitating a movie star -- she is a movie star. And it's eminently more enjoyable to watch her flirt and seduce than it is to watch her in some of the "substantial" roles she's been stuck in, like her existential masochism in Krzysztof Kieslowski's "Blue" (the art-house equivalent of a Lana Turner movie, but a hell of a lot less fun).

"Chocolat" toddles along pleasantly enough, though the best things are fleeting -- like Hallström's homage to Albert Lamorisse's classic children's short "The Red Balloon" or a whimsical glimpse of Anouk's imaginary playmate. Viewing the rural-chic look of the film's interiors (shot by Roger Pratt) is like killing a few hours leafing through one of those coffee-table books that purport to show European country living (as enjoyed by the gentry, that is).

I just hope that next time out Hallström gets to use his craft in the service of something with a little more meat on its bones. As trivialities go, there are films a lot worse than "Chocolat." But it's a little too "Why not pause a moment and savor a rich, international coffee?" for my taste. It somehow manages to let you down and leave you feeling pampered at the same time.