Be mine, Kevin Kline

And while you're at it, what do you think of an "Ice Storm"-style White House? 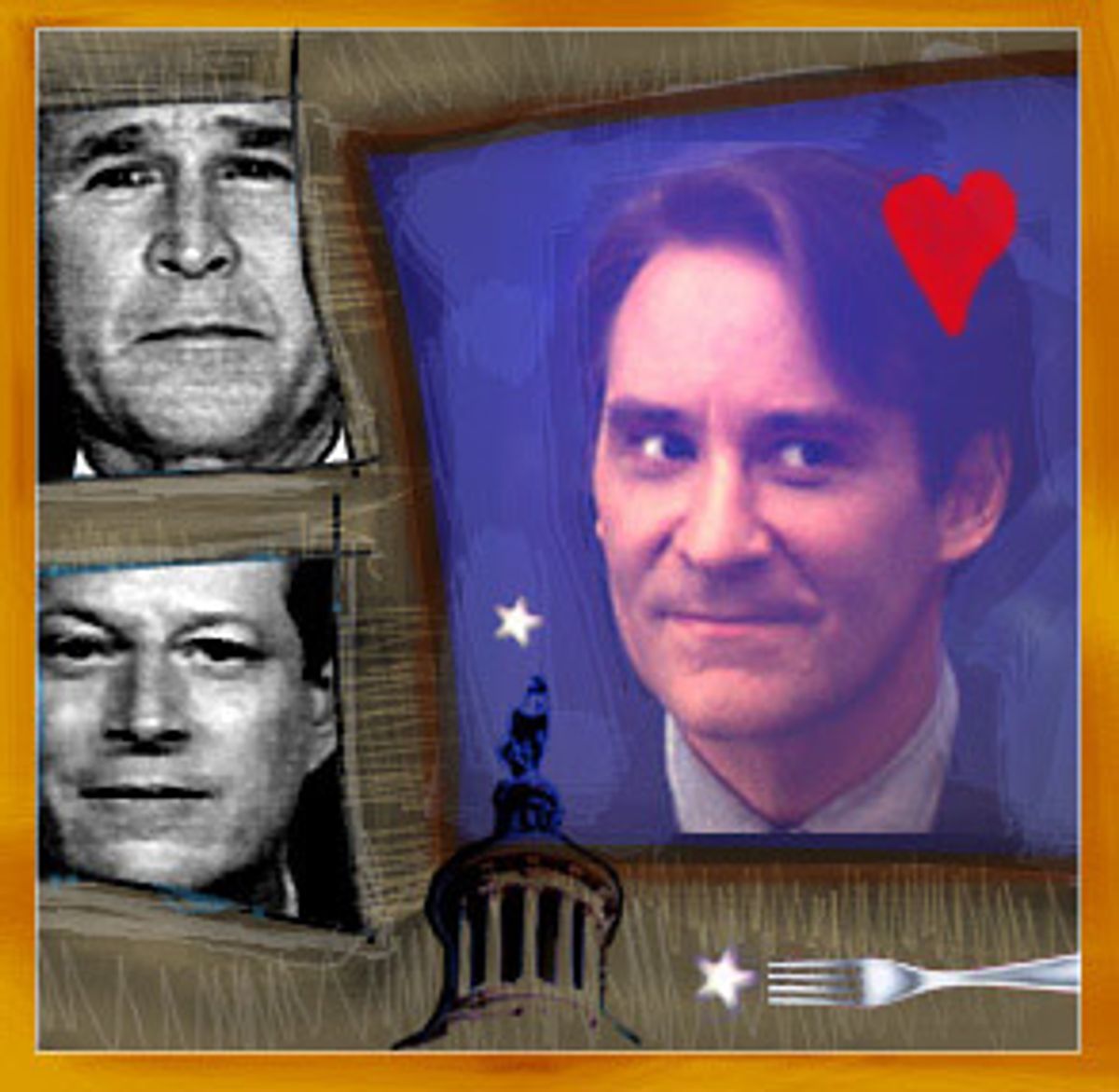 You don't know me and I don't know you, so we're even. I watched "The Ice Storm" the other night and I thought that if I celebrated Christmas, I'd want to have Kevin Kline. Not in the marriage way, but maybe in the biblical way and definitely in the "go out to dinner a few times and forever afterward casually mention it to all my friends" way.

Then I looked you up on the Internet Movie Database, and I saw you are married to Phoebe Cates and have two children. So there you have it -- it will have to be just the dinner. Since this is my fantasy, though, I'll have to ask you to not bring Phoebe or the kids.

It makes sense. Everyone said, "If only George W. Bush had Al Gore's brains. If only Gore had Bush's twinkly eyes." (Everyone also said if only Ralph Nader would do the Ross Perot thing, but that's another movie.) Everyone said, "I don't like either one of them all that much." And a lot of people said, "Boy, am I ever going to miss President Clinton."

No one can figure out what the Supreme Court was trying to say in the final Bush vs. Gore ruling, anyway. And a lot of people think Gore is in a coma already.

And another thing, depending on how you count the votes, both these guys won. Or lost. Or something. I mean, here's Bush, on the one hand, with a 154- or a 537-vote lead in Florida and a four-vote lead in the Electoral College. And here's Gore, on the other hand, with a lead in the popular vote of 300,000 (in some democracies, that is how they choose the president). No wonder people are confused.

OK, then, just as in a bedroom farce, Tipper Gore plays the first lady, and she falls in love with George W. when he says that in Texas they don't need warning labels on CDs because they execute rap singers. The real Mrs. Bush doesn't have much to do for the next four years, but that would be true anyway.

President Bush doesn't notice Tipper's attentions because he is in love with himself. No one is in love with President Gore. I know that in your usual madcap romantic political comedy-drama, there are all sorts of interlocking triangles and this is more of a flat line. So maybe we could bring in the former president -- Clinton -- for a bit part. People will be ready for that.

You're probably thinking, "That might play in Peoria, but Paris is a lot more sophisticated. What are the presidents going to do when it comes to foreign affairs?" Yes, Kevin, I remember your horrible accent in "French Kiss." Those Parisians are not as gullible as Meg Ryan. Again, we can find our solution in the movies.

Picture this: The TV cameras at the Paris Hilton come on and President Bush reads a speech off the teleprompter that was actually written by President Gore. Now comes that crucial question-and-answer period and the world holds its breath as a sly French reporter asks, "Mr. President, how did you like our Bordeaux?" They are sure President Bush will say something like, "Ah just love it. Especially now that y'all have taken down that Checkpoint Charlie thing."

Instead, President Gore whispers the answer to him: "I just want you to know, I love wine. Now, I don't drink it to excess, but I think a glass of wine with dinner every now and then is good for digestion. In fact, as I was coming in here today, I met a little French girl ..." President Bush smiles at the audience and subtly sticks a handkerchief in President Gore's mouth. "Next question?"

And so they travel to the Middle East, to China, to Japan, where the once and future President Bush does not vomit in anyone's lap. The world falls in love with President Bush. President Gore is afraid to come out from behind the lectern because people won't love him if they see how wooden he is. Each night he prays that he will wake up and be a real president. So does President Bush.

Meanwhile Vice Presidents Ralph Nader and Pat Buchanan are doing what vice presidents have always done -- praying that the presidents will die. It's like the Fantastic Four: Each man has a special power. Or each man has a power. Or maybe it's just that there are four of them.

The term's only four years. I can't think of how else we are going to get out of this mess. To paraphrase you when you played President Grant in "Wild Wild West," "Mr. Bush/Mr. Gore, not every situation requires your patented approach of sue first, sue later, sue some more and then, when everybody's dead, try to count a vote or two."

Remember how it was in "The Ice Storm," where there was that symmetry between how screwed up the parents were and how screwed up the kids were? And the country was having Watergate and Richard Nixon and you were having an affair with Sigourney Weaver, the neighbor lady, and it looked like you were going to get a divorce? That's kind of what things have been like since the election.

The best part of that movie is when you pick up your movie daughter, Christina Ricci, and carry her home. In that scene it seems just barely possible that you will snap out of it and be a grown-up. You had it in you. I could see you loved your daughter and she loved you.

Well, let me know about dinner. We finally have a good restaurant in this town and I've never been to it. Or if you don't want dinner, could you just recommend me as a scriptwriter to some of your friends? I come up with ideas like this all the time.