We should let our children know that falling in love is the most turbulent penetration of all. 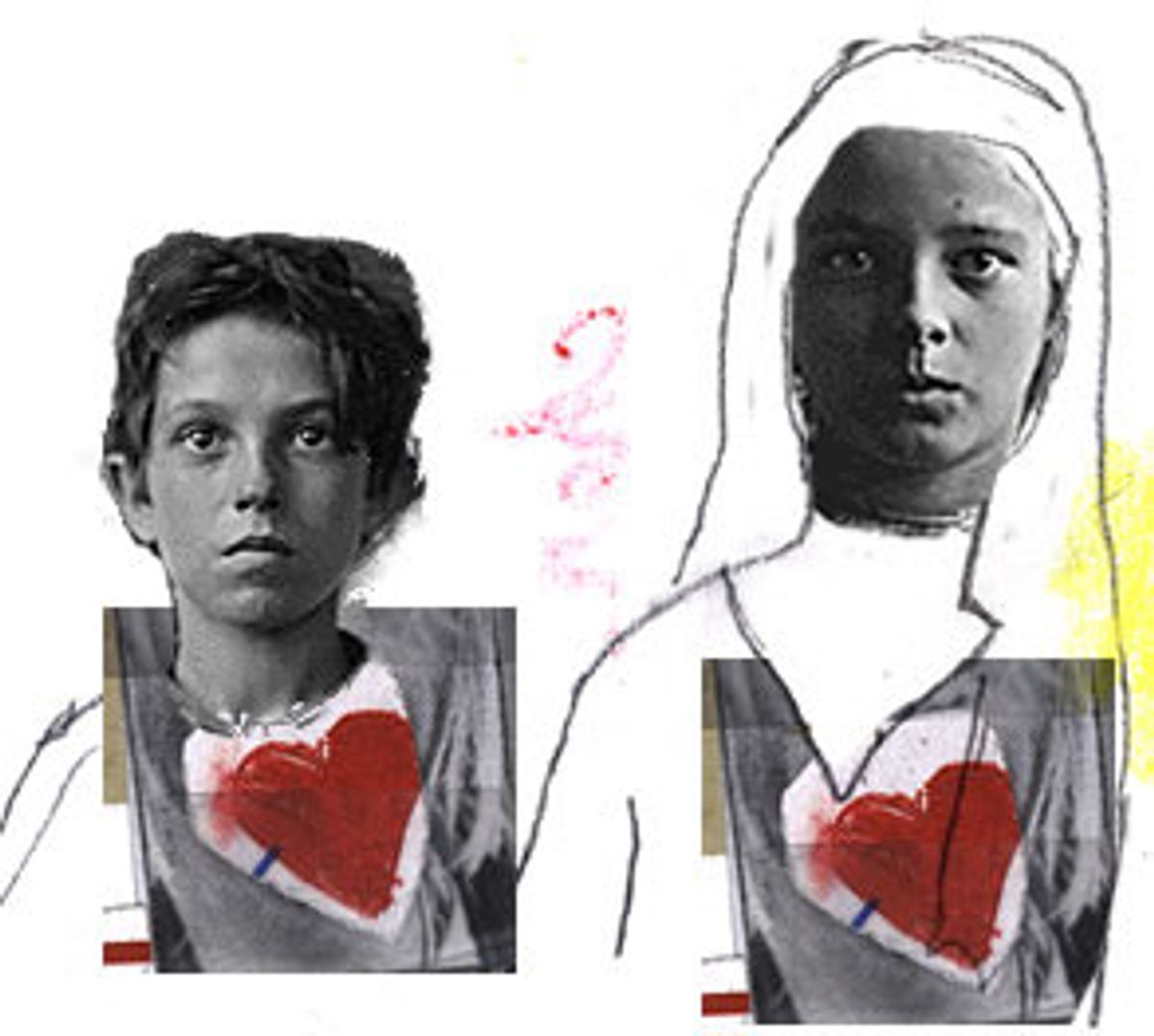 I was going to try this as a comic piece. It would be offered as a "modest proposal" -- the violent solution to a terrible problem, much as Jonathan Swift once proposed the raising of children like cattle -- to be killed and sold as food. But his was an absurd (if logical) treatment, and mine is merely unthinkable in polite circles. So, really, this is an attempt to coax polite people into thinking about hideous or impossible possibilities -- about things too close to us to be uttered. And if there's less humor than there might have been, well, put that down to the intimacy of the subject and the pain of those who suffer from it.

I am thinking about young people (our people, our children) -- I mean those 10 or 11 years old and upward -- and their wish, or call it a need, to have some sort of sexual experience. Why not, when it clamors at them from all the media and advertising they see, and when they feel it in us as one of the things we cherish? Being "grown-up" in their eyes is being able to do it; whereas the rather hunched adults think of having to pay for it all, being responsible. But still, at some point in their curricula, kids come to "reproduction" as the strange chilliness of science tries to deal with the untidy mass of legend, rumor and folklore they have heard and the new anxiety they feel in their bodies.

How was it for you? Didn't you have something like the reproductive system of the rat explained by some bored biology teacher -- with sidelong references to the human example and nothing said one way or the other about the implication: that sex was made for rats? And for reproduction, of course. No one in our biology class dared mention pleasure, though there were boys sitting in the back row masturbating one another -- the risk of which, not to mention the exposure, could only be driven by the need for pleasure, or just from need itself. Think of all the things those biology clerks were praying not to notice; recollect the icy way they admitted arousal. And erection.

For me, that class occurred some 45 years ago, and so much has changed over that time. The steady reference to sex has become more intense in film, on TV and in advertising (it is so naggy now, you have to think that very few are getting satisfaction). The kids can see and hear so much more, and they live on the edge of awkward, adjusting worlds where divorce, abortion, the Pill and being HIV positive are part of the general increase of sexual language in ordinary conversation. No one's claiming that the inescapable eavesdropping ensures understanding or insight. For all of us, I dare say, sex is still the wildest rumor in life, the issue that leaves us most open to unreason. But the storytelling is more blatant now, and so it is more hypocritical than ever to ask growing children to turn a blind eye (or neutered body) to what they have gathered (no matter that, at the same time, for the sake of their education, we are encouraging alertness, ingenuity and the constant need for curiosity).

You hear stories -- if you are a parent in the danger zone -- and the stories are as wild and enticing as novels. Other parents might tell you the "facts" of the case, without always noting how prevented they are, emotionally, from facing all the "facts" with their child. One mother told other mothers that she didn't think necking was appropriate behavior in her 12-year-old.

What a sweet word "necking" is. Doesn't it make you a little fonder of your own youth, and a little more gently disposed toward the lives of your own young? But what is necking, or petting? And does everything of this kind really wait for the big thing, the thing called "penetration"? But consider, there is surely necking where a tongue goes into another's mouth (that is penetration), or petting where hands go into private places and liberate them with a soft touch, sometimes called stroking. If your 12- or 13- or 14-year-old does such things, is that inappropriate? Should the kid "sit on it" or jerk off at home? Is that better, safer, more appropriate?

Consider something further: In many of these moments, a far more significant penetration will have occurred than even the penis knocking on the back wall of the womb. And that is falling in love, the most turbulent penetration. It is having a feeling for another person that alters your sense of self. For it is my own experience, and my hunch, that the young human being has extraordinary difficulty having sex with anyone without being in love. You see, at 12 or 14 or so, life can be so tormenting, so hard, that the need for peace and sharing is as great as the yearning for an orgasm.

And let me add this: At all our levels of involvement with education, I think we would wish as much for success and decency in love as we ever would in sex, making money or whatever. And when I put success and decency together, I am trying to make clear that my aim is not a kind of Don Juanism but a sophisticated, humble sense of love.

My modest proposal is that some part of our kids' curriculum go beyond diagrams of the rat's body to the best portraits of our imagination: talks on human sex and its relationship to love (to be supported by readings from literature, poetry and plays and the viewing of relevant movies -- not just the latest government documentary on venereal disease but, say, Jean Renoir's "Partie de Campagne," François Truffaut's "Anne and Muriel," Luis Buñuel's "Belle de Jour," Bernardo Bertolucci's "Last Tango in Paris," Jean Eustache's "The Mother and the Whore"; and inevitably, in American situations, there would have to be some talk of why no American films) and discussion of the varieties of sex and penetration, like masturbation, oral sex, same sex-ism; the means of birth control and giving birth; the dangers of sexual disease; and the possibility of sex (and love) beyond age 25.

I know that simple paragraphs of such a schedule may raise pandemonium. So let us move on quickly to the real novelty I have in mind. What I have just listed is a menu of topics or skills -- such as English grammar or mathematics present. Those skills need to be "mastered" -- or, if mastery has unfortunate connotations of expertise, another kind of Juanism, let me just speak of competence. And let me propose that as you would not want your son on the road (possibly in your car) until he had achieved competence (a testable performance), so you would not want any young man to be with your daughter unless they both had also given some evidence of practical experience and skill.

There are still marriages made in our society between sexually incompetent or unskilled or frightened people. That can hasten divorce, with all its damage, as easily as, say, promiscuity -- not that promiscuity is ever going to be less than a Ph.D. topic. We have every reason to try to make ourselves a little happier, if only for a little time. Staleness, boredom, disappointment -- those, I fear, will always be life studies, worked out over the long haul.

But we need a laboratory, a way the novice driver can try out a skid pan or a three-point turn. And this is where I come to the brothel in education. We could use other words, I suppose. But, really, mine is an overall approach that seeks an end to euphemism wherever possible. I look upon my son and his schoolmates at their academically demanding, single-sex school and I see a brothel where they could be educated, or finished, by experienced women. This does not by any means imply a kind of older, hardened woman whose attractiveness is long gone. Just as this private school takes pride in the best facilities for science, gym, language labs and so on, why not a corps of women perhaps 10 years older than the boys -- accomplished, tactful, tender, diversely experienced and altogether believers in the whole nature of education. Of course, these women would have to be paid (I would exclude tipping), but we're paying for education already, aren't we?

And yes, to forestall your outrage, your daughter should have the same educational opportunity. Even now, in this next century, some parents may be alarmed or horrified at the thought of their daughter's virginity being traded away. But ask yourself whether you fear the licensed, inspected brothel more or less than, say, the reports that "good" girls at good schools are in some places giving head to a succession of embarrassed amateurs. You see, the things called "sex" and "penetration" are going on, and are starting early. You know there is no stopping them, because somehow you yourself seized some moment. But the practitioners can be helped. And they may be taught that sex and love are not spoiled by skill, by tendresse, by curiosity and by the acquired habit of talking about it before and afterward.

You say this could never happen? Reflect a moment -- it has to. Everything happens eventually. If not, then the sexual life of our young may be as desperate, messy or dismayed as our own. Would we wish that on enemies, let alone our own children?