Racy books that are also artful can be the best gift of all. 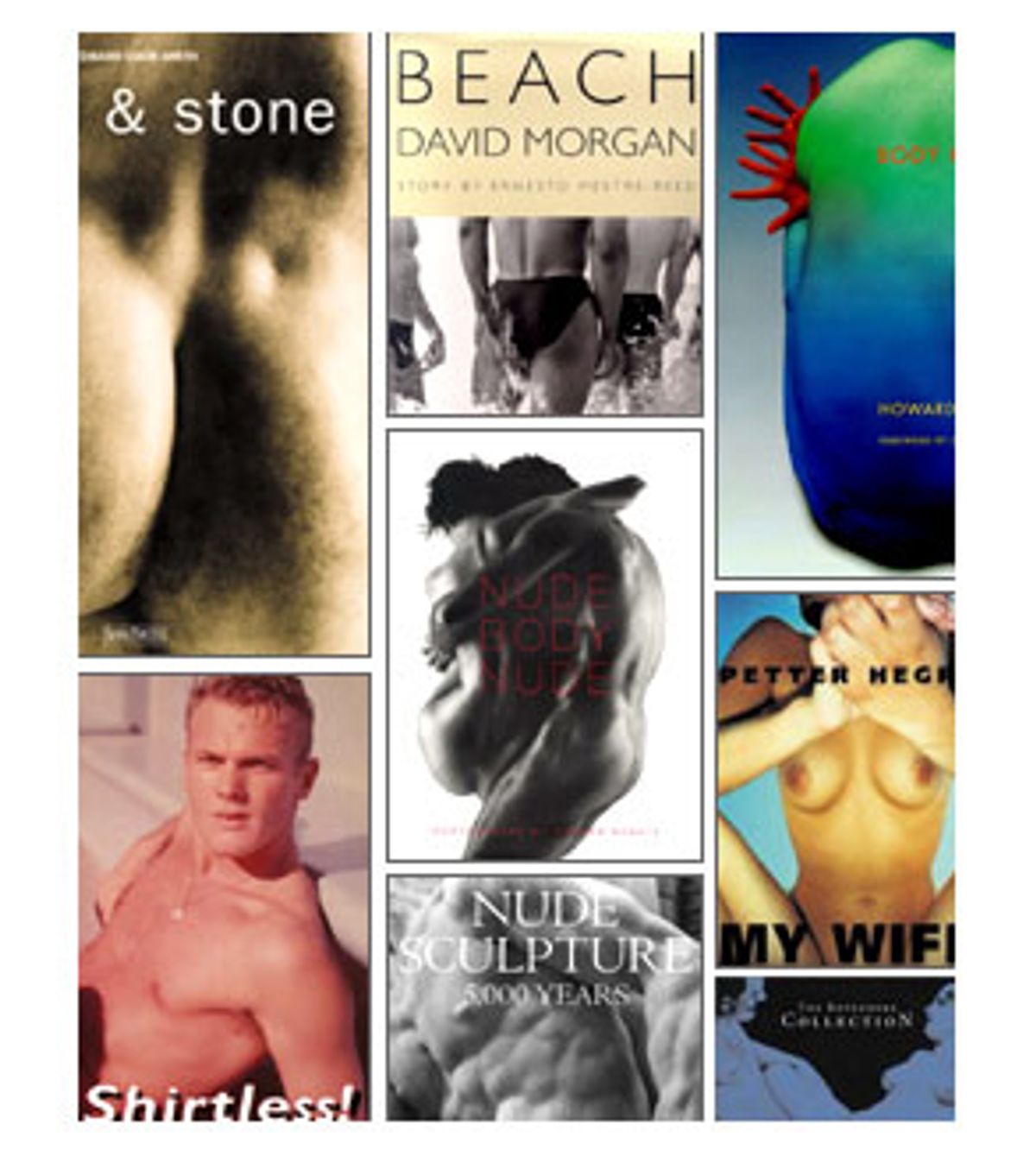 The hunky boys of the big and little screens -- both timeless legends and pinups destined for obscurity -- are the subject of the most unabashed and campy photo book of the season: "Shirtless: The Hollywood Male Physique." Rock Hudson in the bathtub, Ryan O'Neal eating Kentucky Fried Chicken in a bathing suit, Rudolph Valentino on the beach (he has an enormous package). What's especially great about "Shirtless" in comparison with photo books largely populated by models is that we already have relationships with these men; we've seen them in countless movie and TV roles, and now we get to see them nearly naked. There's the thrill of watching the iconic get undressed, plus a nostalgic and comical element: Marlon Brando, John Travolta and Matt Dillon look amazing, but we all know they've gone to seed. Some of these guys are hairy, normal-looking or soft around the middle (Ronald Reagan, Chuck Norris and Erik Estrada, especially), while others are surprisingly built (like Michael Landon, Christian Bale and Steve Guttenberg). "Today, in a time when perfect male bodies are almost commonplace," writes the author, "I felt it was important to focus on the men who paved the way for this bounty." The boy-crazy teenagers and the gay cinemagoers on your list will love this book. And before you wrap it, you can get a glimpse up Jude Law's shorts.

In "Body Knots" Howard Schatz, who claims on the jacket copy to be the "world's preeminent photographer of the human body," does for the human form what "Play With Your Food" did for the potato. Photographs of nude dancers twisted into complicated corporeal tangles, then colored and otherwise altered with computer technology, make the human body seem more like a bulbous fruit than a sexual object. Yet the book is oddly sexy, partly because of the anonymity of the models (their faces don't show), and partly because their naked bodies are bonded in orgiastic poses. Bottoms swell like luscious pears, hands look like spiny leaves, spines arc like the curve of a banana. This is erotica for graphic designers, Silicon Valley millionaires and fruit lovers of all persuasions. "Nude Body Nude," another collection by Schatz, isn't worth its $75 price tag. Glamorous, perfectly formed and well-oiled bodies in provocative (but not sexually explicit) poses make the nude seem like a dead art form: The book is a collection of sleek studio shots, nothing more.

"Picturing the Modern Amazon" is designed to accompany a museum exhibition of the same title that was at New York's New Museum of Contemporary Art last year. It is the most scholarly title on this list, but it provides naked, hypermuscular photographs and drawings that (although clearly intended to edify young girls and feminist theorists) will arouse people who like being engulfed and overpowered by enormous women -- and titillate nearly everyone else. The pictures range from historical photographs of circus strongwomen to portraits of scantily clad bodybuilders by artists like Andres Serrano (Yolanda Hughes in black-leather bondage wear); Walter Gutman (Claudia Wilbourn, one of the few builders without obvious breast implants, flexing in the nude) and Renée Cox (Heather Foster, toting a gun and wearing thigh-high boots). Even better is the comic-book art: Wonder Woman with her golden lasso and various superheroines from more outré publications, such as an image from "Atomic Age Amazon" that features a gigantic woman named Jodi shooting bullets out of her phenomenally large breasts.

The photographs in "Nude Sculpture: 5,000 Years" are discreetly erotic. The book is simultaneously a homage to the beauty of the human body and a testimony to the nearly miraculous ability of sculptors to render softness out of stone. It's a collaboration between photographer David Finn and artists like Rodin, Bernini, Canova, Dupré and Michelangelo, and the pleasure is in the curves of the highly muscled male bodies and the smoothly arching female ones. Christ hangs on the cross, and there are closeups of several penises -- those of Hercules, Perseus, Bacchus, Adam and someone who raped the Sabine women. The genitalia of myth, history and legend, suitable for your grandma's coffee table.

"Emerging Bodies: Nudes From the Polaroid Collections" will excite the art lovers and amateur photographers on your list, though it's not much of a turn-on. Pictures made on instant film by artists like Gabriele Basilico, Chuck Close and Robert Mapplethorpe, as well as a number of lesser-known photographers, prove genuinely thought-provoking and very often lovely.

Michael Spano's black-and-whites of women whose bodies are patterned with light and Basilico's pictures of naked bottoms scored by marks from chair seats explore the relationship of the body to its environment. And of course, Polaroid film is ideal for anyone inclined to snap his own dirty pictures. Rather than face prying clerks at the local 24-hour photo stop, the Polaroid photographer gets instant results and complete privacy. Consider "Emerging Bodies" as inspiration for a little homemade erotica.