Never mind the critics: With a posse that really looks like America, Bush could become a crossover success.

By Robert A. George 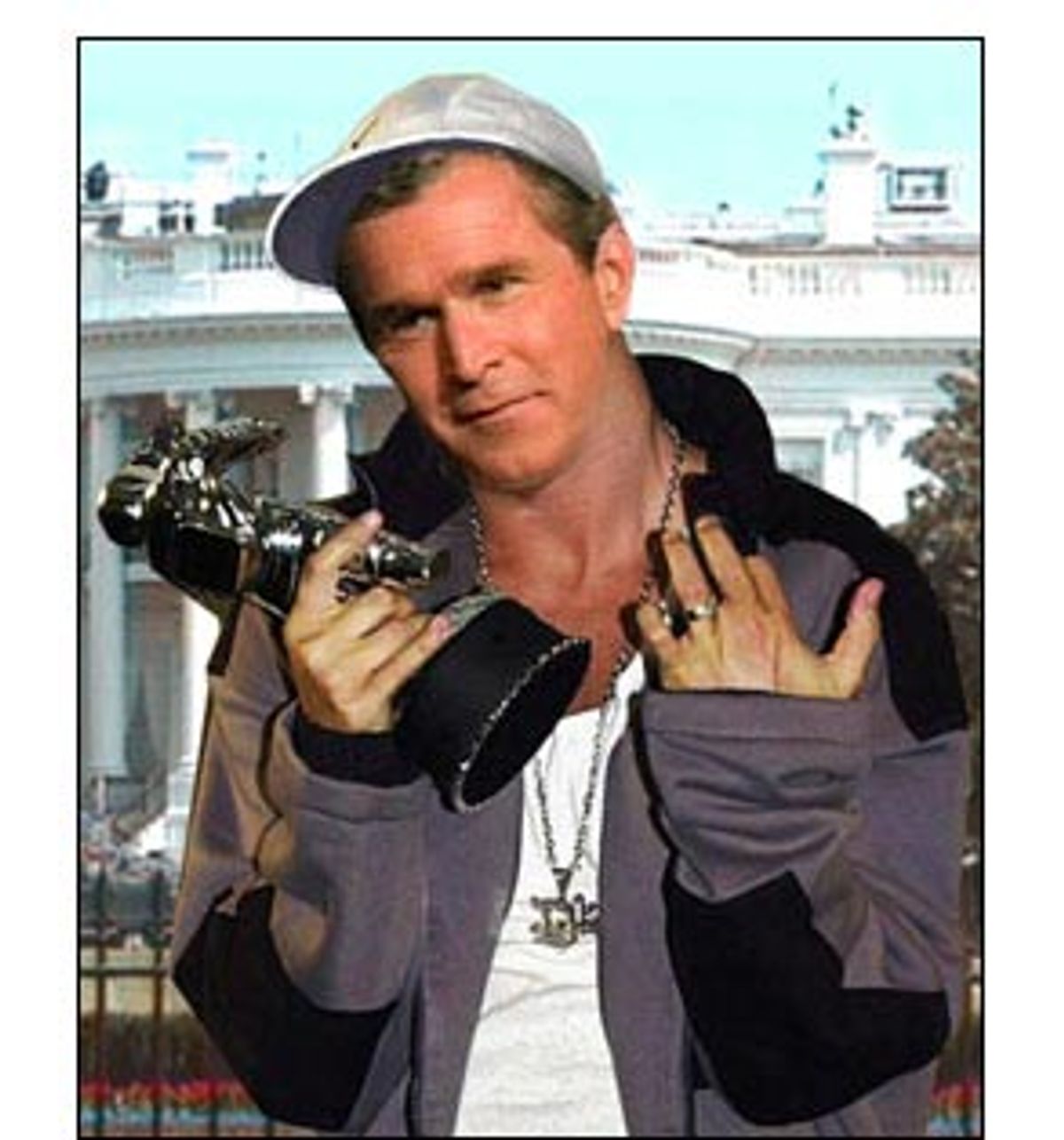 As Eminem finds himself at the top of many a music critic's end of the year "best-of" lists, perhaps George W. Bush's remarkable courting of black America makes a bizarre kind of sense.

Think about it. Before the campaign got underway, there was the dust-up over a Talk magazine profile where Bush mocked death row inmate Karla Faye Tucker's last words, "Please don't kill me!" Hmm. Dismissive of women: Check. The Talk profile was salted with more than a handful of "F-words." Profanity: Check. There was the off-the-cuff reference to New York Times reporter Adam Clymer as a "major league asshole." Verbally retaliating against someone he believes had "dissed" him in print? Check. For the purposes of this article, ignore the rumored drug use, but the DUI story fits the profile. Run-ins with the law: Check. Add in his continuing war with the English language and the Eminem comparisons only grow.

Aside from his various legal battles, what else is Eminem's major claim? He has taken a black art form and, using initially underestimated skills, managed to move a major-league number of CDs, primarily to whites -- yet is respected by blacks for his flow.

Of course, the biggest problem with this analogy is that Bush hasn't gotten anywhere near the love from the black community that Eminem has. Heck, Bush hasn't even gotten the props briefly enjoyed by Vanilla Ice. With barely 8 percent of the vote, Bush has received a smaller share of support from black Americans than any Republican candidate since Barry Goldwater in 1964. It is particularly perplexing considering Bush actually sought that support far more than any other recent GOP standard-bearer.

Yet, since the "ratification" of his win, Bush appears to be committed to carving out a Cabinet that "looks like America" -- even more than Clinton did. His first two selections were African-American -- Colin Powell and Condoleezza Rice. Of his first nine appointees, only two (Don Evans and Paul O'Neil) are white men. The diversity is not merely genetic, it's also ideological. Powell and Rice both support affirmative action and some form of abortion rights. And New Jersey Gov. Christine Todd Whitman, who has accepted Bush's offer to head the Environmental Protection Agency, is anathema to the GOP's conservative base because of her strong pro-abortion views (Quick: Name one vocally pro-life member of Clinton's Cabinet in the last eight years. For that matter, think of one pro-life member, period.)

Still, Bush is being criticized by black Democrats and civil rights activists as making only "token" appointments that won't win him many black votes down the road. Then, what are we to make of Bush's sitting down with a group of black ministers Wednesday back in Austin, Texas?

Let's be clear: Considering the non-support Bush received, he didn't have to take valuable time out of his already-shrunken transition period to meet with the ministers. For that matter, was it necessary to have a black secretary of state and national security advisor? During the campaign, there was a quiet whisper among some Republicans that, contrary to conventional wisdom, there was no way the top foreign policy positions in a Republican administration would both go to minorities. Yet it's turned out to be true.

Without waiting for his Cabinet to fill out, Bush proceeds to talk about his faith-based anti-poverty programs with a group of African-American clergy. One of them, the Rev. Floyd Flake, a Democratic former member of Congress, is also being seriously mentioned as a Bush education secretary. During the campaign, these overtures to minorities were dismissed as public-relations measures to cross over to suburban, white, baby-boomer moderates craving a friendlier GOP.

But the campaign is over. Why would Bush continue if he was really just pandering? Especially after such abject failure with blacks at the polls? Perhaps, shockingly, it's because this is the real George W. Bush? Maybe it's important enough to him that he will continue to try and succeed with a reverse crossover -- a home-invasion of black America.

Well, if he does, the next important question becomes: If Bush is Eminem, who is his "super-producer," his Dr. Dre? Is it Powell, who helps "sell" Bush to blacks (Powell spoke at Washington's Howard University on Tuesday, underscoring the need for more minorities joining the Foreign Service), or is it Vice President-elect Dick Cheney, who does the job for conservatives (another minority group whose concerns must be addressed)?

George W. Bush knows that he is not going to get to black America by giving in to Jesse Jackson's political agenda (whatever it might be). Jackson is an ideological Democrat, whereas most blacks are cultural and historical Democrats. Just as in the days of old when Southern whites would rather vote for a yellow dog than a Republican, blacks have become culturally accustomed to being suspicious of the GOP, accepting Democrat as the default choice. This makes the community -- as a group -- easily swayed by, say, an NAACP ad that reminds blacks of James Byrd's death, and Bush's failure to sign a hate crime bill in Texas (even if there already was one in Texas that covered racial hatred).

Thus Bush realizes that if he is ever going to have any hope of ingratiating himself to the black community, he will need to take an alternative route. To continue the music-industry analogy, Bush needs to go the "indie" route to circumvent the "major" black distribution network. His alternative distribution line depends on the "three Ps": personality, personnel and policies.

1) Personality: He is never going to equal Clinton's adoration among blacks, but if Bush makes reaching out to blacks a regular part of his message and not just an afterthought, it will be difficult for even a Jesse Jackson to attack him in 2004 the way he is now;

2) Personnel: Powell, Rice and (should he make the cut) Flake would not merely be in Bush's Cabinet, but because of who and what they are, they can elevate those offices to a level not seen before -- especially within the black community. How many people -- of any race -- would recognize Clinton Education Secretary Richard Riley if they tripped over him? Another appointment that may well be of note: Powell's son Michael is the likely next chairman of the Federal Communications Commission.

3) Policies: Bush now has the opportunity to put into practice what conservatives have been pushing for years: school vouchers. While education is primarily a local issue, Bush has the bully pulpit and his meeting with black ministers may have opened up a valuable pipeline for him. Even if Flake doesn't come on board as education secretary, he is someone who has shown how charter schools and other non-teachers' union alternatives can work effectively in inner-city environments. If this message can be sold to Flake, it can be sold to others.

While Bush is held in very low regard by the vast majority of black America right now, four years is an eternity in politics. The seeds that he is planting even before he has been sworn in may very well bear fruit. By 2004, if the crossover is successful, black Americans might be less likely to assume that everything black leaders say about Bush is true, and instead be left asking, "Won't the real George Dubya please stand up, please stand up?"

MORE FROM Robert A. George