We're supposed to buy Nicolas Cage as a sensitive guy, but in this hack spin on "It's a Wonderful Life" the soulless yuppies have way more fun. 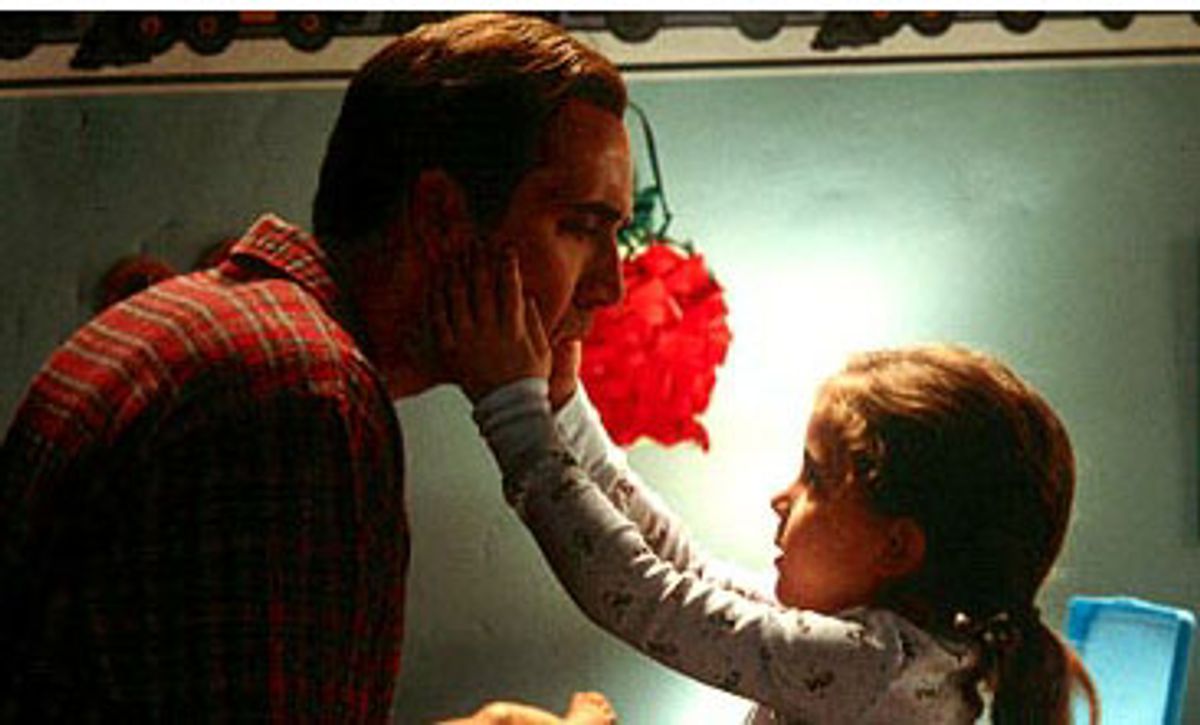 Of Hollywood's many dubious narrative modes, perhaps none is as bogus as the movie that teaches us to repent of our greed and materialism and become better human beings. I mean, God knows most of us could stand a few doses of nobility and humility, and during the handful of hours in the holiday season when e-commerce becomes impractical we are supposed to reflect on such things. But the edict to become better comes with two questions: First, better than what? And second, who is qualified to judge? Even if the movies do carry a spiritual function of sorts in our society, I'm not convinced that employees of Universal Studios have the answers.

"The Family Man" is not merely another movie knockoff of Charles Dickens' often-filmed "A Christmas Carol" -- the ur-text for all such didactic fables -- although that's a big part of the story. It's also a new entry in the '90s litany of films about soulless yuppies transformed into caring and sensitive guys, usually through the magical powers of children. (See also Bruce Willis in "The Kid," Jim Carrey in "Liar Liar," Harrison Ford in "Regarding Henry.") Here, Nicolas Cage provides a positively delightful razor's-edge performance as Jack Campbell, a filthy rich, swinging-single investment banker who wakes up one morning as a New Jersey tire salesman with a wife and two kids. Jack is such an unredeemed rascal, and his reactions to his new life in suburbia so histrionic, that we hardly notice the movie painting itself into a narrative corner where it finally dies of neglect.

Maybe the problem is that Jack's just too damn much fun. As usual, Cage seems to be risking a coronary at every moment with his overheated acting style, and he certainly plays Jack as a self-important workaholic who believes the world (especially its population of lingerie models) is at his command. But he seems way more likable than the guys I see on the streets of Manhattan every day. He bounds through his underfurnished luxury apartment singing opera to himself (badly). He flirts agreeably with his downstairs neighbor, offers free financial advice to his doorman and cuts up with his gruff but twinkly boss (Josef Sommer), who describes himself as "a heartless bastard who only cares about money." Awww. Who knows whether the zillion-dollar deals these guys make are truly evil? (The movie certainly doesn't.) They may be maniacs, but they're not cruel or vicious people; working for them looks like a blast.

After Jack clumsily tries to intervene in a Christmas Eve racial incident at his neighborhood convenience store, a homeboy angel named Cash (Don Cheadle) decides to show him what his maxed-out life is lacking. (If I had a dollar for every movie in which a black person serves as a white person's font of magic and wisdom, I could start my own damn studio.) So when Jack wakes up on Christmas morning, there's a big, sloppy St. Bernard-retriever mix licking his face. In this reality, he married his college sweetheart Kate (Téa Leoni), bred a couple of rugrats, slid off the fast track and wound up managing his father-in-law's tire dealership.

Director Brett Ratner ("Rush Hour") and Cage milk plenty of laughs out of Jack's abject amazement and horror at his middle-middle predicament. Leoni (best known to celebrity aficionados as David Duchovny's wife) was always a wry, sparkling presence on her mid-'90s TV series "The Naked Truth," and it's great to see her in a major film, but Kate is nothing more than a rather dim straight woman to Jack's antics. She only minds a little when her husband, rather than opening presents with the kids, rushes out of the house screaming, "Where's my Ferrari?!" and disappears for hours. Nor does she seem to find it seriously troubling that he forgets their anniversary, forgets what she likes to do in bed, doesn't know what either of them does for a living and has overnight lost his bowling ability.

Cage can do more by simply exhaling than any actor in movie history; with one nearly silent expulsion of breath, he can express all the existential disappointment of European philosophy. When he opens suburban Jack's closet for the first time to view the baby-blue sweater vests and Hawaiian shirts, he heaves a heavy sigh: "This is just subpar." On his first attempt to change his infant son's soiled diaper, his eyes roll back in his head as if he's about to lose consciousness: "Oh! Holy Mother of God!"

As long as Jack is a drowning man desperately trying to stay afloat in an unfamiliar sea, "The Family Man" remains crisp and amiable. He even forms an unlikely alliance with his 6-year-old daughter, who understands immediately that Daddy has been replaced by an alien to whom the world's every detail must be explained. When Jack arrives at the day-care center and sits, paralyzed by panic, in the family minivan, she prompts him: "This is where babies go while their parents are at work."

On a trip to the mall, Jack is momentarily seduced by an Ermenegildo Zegna suit, the kind of thing he ordered by the dozen in version 1.0 of his life. When Kate reminds him gently that a tire salesman with a family can't afford to spend $2,400 on something he might wear once a year, he rips off the offending garment and launches into a vintage Cage slow burn: "Forget it! We'll get a funnel cake. It'll be a highlight of my week."

Of course, you know where this is headed. Our hero will gradually come to appreciate the simple pleasures of his new life in split-level-land and won't want to be old master-of-the-universe Jack Campbell anymore. Ratner handles this downhill slide into conventional sentiment about as well as anyone could, although as an audience member I fought against it tooth and claw. The home video Jack discovers, in which he sings "La La La Means I Love You" to Kate at her birthday barbecue, is a highly effective piece of emotional manipulation, both ludicrous and touching. But in the end conventional sentiment, rather than any actual morality, is all that the script for "The Family Man" (by David Diamond and David Weissman) has to offer.

If "The Family Man" argued that the amped-up Jack was stealing from widows and orphans and bankrupting entire African nations (as he probably is), it might have a legitimate point to make. Instead, the filmmakers expect us to swallow a sniffly speech from Kate about how she doesn't want Jack to pursue his dreams of wealth and glory on Wall Street because "the life they love" is right here on Maple Street. You can bet none of those involved with this lively and entertaining film would be caught dead in Jack No. 2's nameless turnpike community, but they still want to lecture their audience about the value of conformity. "The Family Man" may bear a superficial resemblance to a classic holiday morality tale like "It's a Wonderful Life," but that's like saying George W. Bush resembles a real president: Beneath the candy-coated exterior there's a hollow darkness.