This showdown on the nuclear frontier isn't about the U.S. vs. Cuba and the Soviets -- it's about the Kennedys vs. a vast old-man conspiracy. 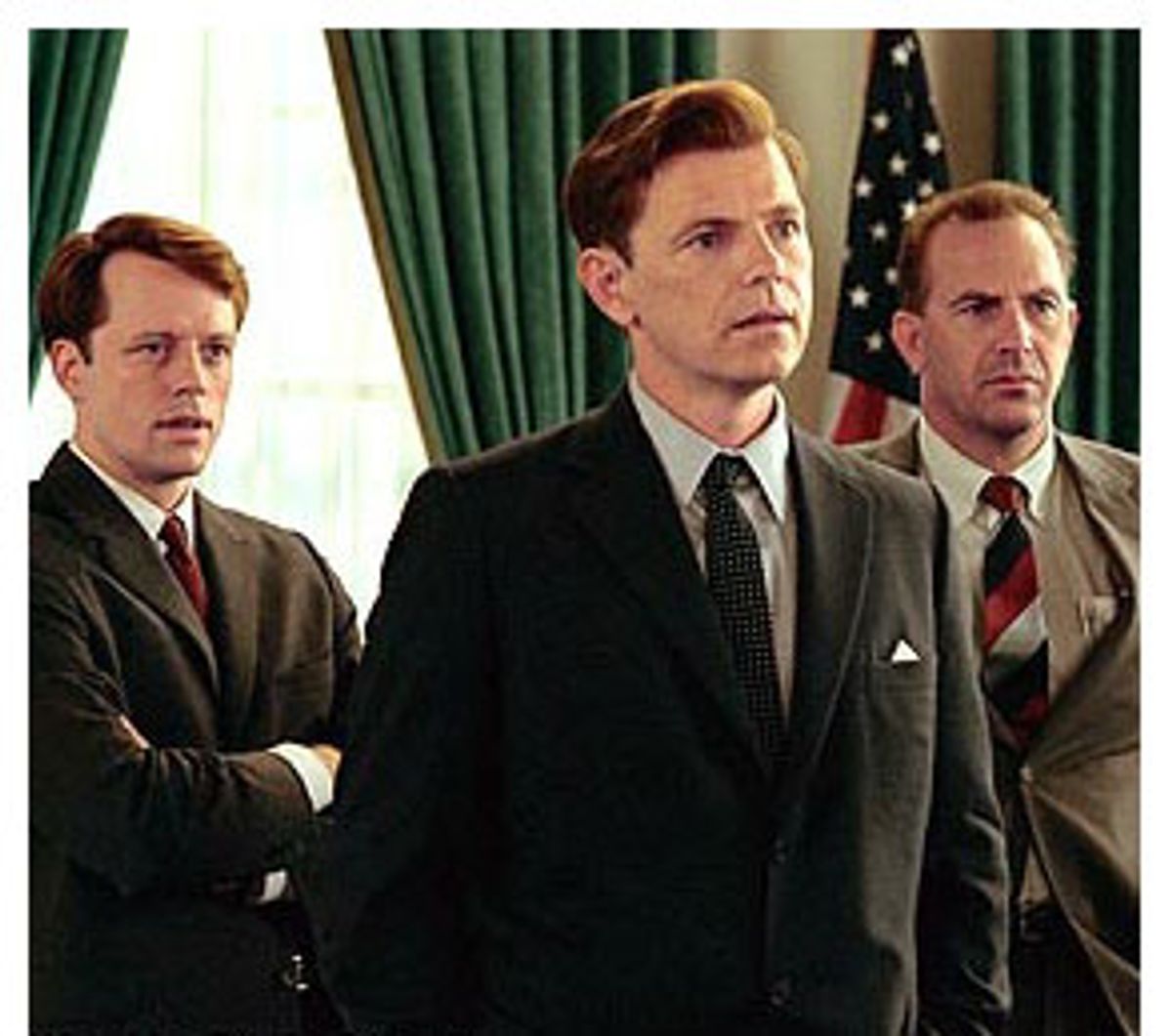 After President Clinton took over from George Bush père, his fellow baby boomers jumped all over him for being overambitious and disorganized, and for not pushing through a sound policy on gays in the military. After John F. Kennedy took over from Dwight D. Eisenhower, those in their 30s and 40s, overjoyed at having a virile young man in the White House, were able to forgive him anything -- even the failed overthrow of Fidel Castro that started, and ended, at the Bay of Pigs. By the period covered in "Thirteen Days" -- October 1962 -- Kennedy's best and brightest felt they had contained Cuba as an issue. So when American spy planes revealed that the Soviets were planting their missiles on Castro's soil, 90 miles from the United States, Kennedy knew he had to move quickly to save both his party's political fortunes and, well, the world.

That point was made more clearly in the three-hour 1973 TV drama "The Missiles of October" than it is in "Thirteen Days." With Kevin Costner co-producing and costarring as Kennedy advisor Kenneth P. O'Donnell, it's a thoroughly bland and mediocre movie about the Cuban missile crisis. Yet it's a cunning piece of Kennedy hagiography.

Of course, those who judge presidencies by tangible accomplishments have never adequately reckoned with the long-range influence of Kennedy's emphasis on public service and vigor. Still, when advance reviews of "Thirteen Days" declare that the movie offers a welcome contrast to today's putatively phony and disingenuous leaders, you have to ponder how we weigh our public characters. As a nation, we're being drawn into a knee-jerk lionization of Camelot and trivialization of our current president. Kennedy may have had his name on the cover of "Profiles of Courage," but that doesn't mean he always acted like one -- it doesn't even mean he wrote the book, which has been ascribed in part to Arthur Schlesinger Jr., James MacGregor Burns, Allan Nevins and Theodore Sorensen. (At least Al Gore was the author of his bestseller.)

All the talk we've been hearing about "The Greatest Generation," with its stress on wartime sacrifice, carries overtones of yearning for a time when "men were men." I fear that what makes JFK the perfect president to wax nostalgic over in the new millennium isn't his wit or eloquence, or the highest planes of his idealism, but his camera savvy and his readiness to look death in the eye. In "Thirteen Days," he and his inner circle judge Adlai Stevenson's berating of the Soviet Union at the United Nations as if they were rooting for their side on "Crossfire." And though "Thirteen Days" pits JFK against hawks who want to order airstrikes on Cuba immediately, the net result is to celebrate him as a strategist of the new frontier of nuclear brinkmanship. The war hero of "PT 109" becomes a warrior for peace.

How can one not be drawn into a story with torn-from-the-transcript dialogue like Air Force Gen. Curtis LeMay telling Kennedy, "You're in a pretty bad fix," and Kennedy replying, "Well, maybe you haven't noticed you're in it with me"? (This exchange is the crux of the trailer.) At its best, "Thirteen Days" shows that a compromise between martial power and negotiation can be as dramatic as extremism. But the movie is too intent on sweeping us up in the spell of JFK's charisma. As a consequence, the selling of the crucial Kennedy-sponsored consensus -- the widespread acceptance of Secretary of Defense Robert McNamara's idea to blockade Cuba instead of bomb it -- lacks the requisite barreling momentum.

The smartest move of writer David Self ("The Haunting") and director Roger Donaldson ("No Way Out") is to dramatize how JFK and his attorney general brother, Robert, keep abreast of their dueling advisors and of their forces in the street, the water and the air. The president and/or his men pressure a newspaper editor to call off a story, insist that JFK alone has the right to trigger any kind of naval fire and even command American spy pilots to avoid being shot -- implying that they should lie to their superiors if they are fired at so the rabid American military won't retaliate. (That last bit is fiction.) In "Thirteen Days," these decisions are an integral part of JFK's plan to defuse impending catastrophe, as crucial as any high-level discussion of how to handle Nikita Khrushchev. Far better than the film's embarrassingly familiar stock footage of mushroom clouds or school kids practicing duck-and-cover routines, this dual focus allows Donaldson to cut away from talking heads and to suggest the earth-shattering military might that JFK struggles to hold in check.

Unlike earlier versions of the saga, "Thirteen Days" incorporates that dread concept of script committees, "the human side." Instead of "You'll never believe how close we came," the ad line could be "This time it's personal." The hinge to this part of the story is the character of O'Donnell, a college buddy of Robert Kennedy's, now a special assistant to the president with an expertise in gauging the political impact of policy. O'Donnell's function is to bring a warts-and-all perspective to the furrowed-brow spectacle of Bruce Greenwood's JFK and Steven Culp's RFK. But seeing the Kennedys through O'Donnell's eyes in effect elevates their stature; every show of self-doubt or vulnerability makes them more engaging. At the movie's most explicit and annoying, this ersatz humanizing results in scenes like Culp's competitive Bobby complaining about always being called the ruthless, brilliant one. Briefly, the Kennedy brothers come off as the Smothers Brothers.

The shrewdest aspect of the JFK-RFK-O'Donnell nexus is that O'Donnell's home life can serve as the Life magazine version of the Kennedy saga without raising questions of whitewashing. (There is one dewy shot of the president looking out the window, worriedly, at Jackie and their children.) An Irish Catholic with a pretty wife and a brood of kids, O'Donnell exudes the robust domesticity of the Kennedy mystique in a way that JFK no longer can, after four decades of exposés.

Despite Costner's bizarrely broad Boston accent, which he tires of and loses midway through, he relaxes into the role of second banana. He doesn't give the performance of the movie -- that would be Greenwood's elegantly underplayed JFK -- but he does intensify the material with his alternating pushiness and mulishness and his old-fashioned masculinity. O'Donnell, a fierce political loyalist, is so secure in his allegiance that he's unafraid of going toe-to-toe with Jackie, or with Jack. Audiences respond to the film's pedestrian, sturdy portrait of co-workers sounding off and fooling around and regrouping for a common cause -- just as they do when watching the infinitely more skillful and entertaining (and even more enlightening) "The West Wing."

But if O'Donnell helps ground the film, he also leads the filmmakers to follow him when, temporarily angst-ridden, he leaves the White House to watch his son play football. For the movie, it's a terrible third-down decision: We lose track of the main action during a crucial period, as the Kennedy group struggles to make sense of contradictory telegrams from Khrushchev.

Then again, the moviemakers organize this film's entire 150-minute length less around the chess game with the Kremlin than around an us-against-them melodrama of the Kennedy camp vs. everyone else. The moviemakers' view of the others could be summarized in the line "There are no wise old men." They reduce the more rigid Cold Warriors to a blur of uptight Pentagon and State Department types. These ultra-white men in suits and uniforms growl about father Joe Kennedy's espousal of appeasement before World War II, and theorize as to whether weakness runs in the Kennedy family. Most of the real work gets done with a series of handoffs from Jack to Bobby or O'Donnell, along with an occasional assist by Dylan Baker's McNamara. "Impress me," Jack orders his brother. Bobby does his best to live up to the command, whether brainstorming without Jack at Excomm, a special executive committee of the National Security Council, or having a critical meeting with Soviet Ambassador Anatoly Dobrynin.

The rest of the characters are treated according to how they measure up in a Kennedy-centric universe. Early on, our U.N. ambassador, Adlai Stevenson, puckishly calls himself a coward for suggesting that the United States swap its Jupiter missiles in Turkey for Khrushchev's missiles in Cuba. The Kennedys ultimately agree to the swap as part of a deal -- with the proviso that it not be publicized. No one picks up on the irony of the tough-as-nails Kennedys following "weak" Stevenson's lead. Although O'Donnell is dovish toward Stevenson, the kitchen cabinet's question of whether Stevenson has world-class cojones mucks up the staging and editing of his crowd-pleasing confrontation with the Soviets at the U.N. Donaldson keeps cutting to the TV watchers in Washington, who voice first doubt, then approval; it's like a bad backstage musical in which the director chops the big number into pieces to include the action in the wings.

TV's "The Missiles of October" may have been a four-square production, full of accents as pronounced as Costner's, but at least it had the guts to concentrate on the moves and countermoves with Moscow (making Khrushchev himself, not O'Donnell, the third main character). "Thirteen Days" provides such a hazy impression of what's going on back in the USSR that when RFK seals his deal with Dobrynin, it's as if a compact has been made by an international goodwill group. Indeed, when O'Donnell describes himself to Dobrynin's attaché as "the friend," I thought he meant not just a friend of Bobby Kennedy's but also of well-meaning people everywhere. For a moment you wonder why, with so much liberality on both sides, the crisis erupted in the first place.

"The Missiles of October" also assumed that the audience could keep track of a dozen or so divergent voices. Baker's McNamara has a dynamic moment when he browbeats the Navy's chief of operations, but "Thirteen Days" is pretty much a three-man show. At the apex of this triangle is Greenwood's JFK, who's not afraid to appear diffident or irresolute in the eyes of the cocksure and the trigger-happy. Greenwood knows that just one wince when Jack lowers himself into a chair will announce his back pain more loudly than any bleat or bellow, and that the occasional ruminative glance will make his sparks of anger come off as incendiary.

If only the filmmakers had had the same instincts. Synthesizing more revisionist material would have enlarged, not undercut, this movie's presentation of President Kennedy. Making the audience (and Kennedy himself) more aware of his previous failings with Khrushchev, or acknowledging his administration's ongoing vendetta with Castro, would have made Kennedy's resistance to airstrikes or to another invasion of Cuba the position of a man who has evolved as a statesman. Greenwood is great at looking thoughtful, but even amid the Cuban missile crisis, the movie doesn't give him (or us) enough to back up that look. "Thirteen Days," like a cable news channel, wins an undeservedly high interest level because of what it covers, not how well it covers it.