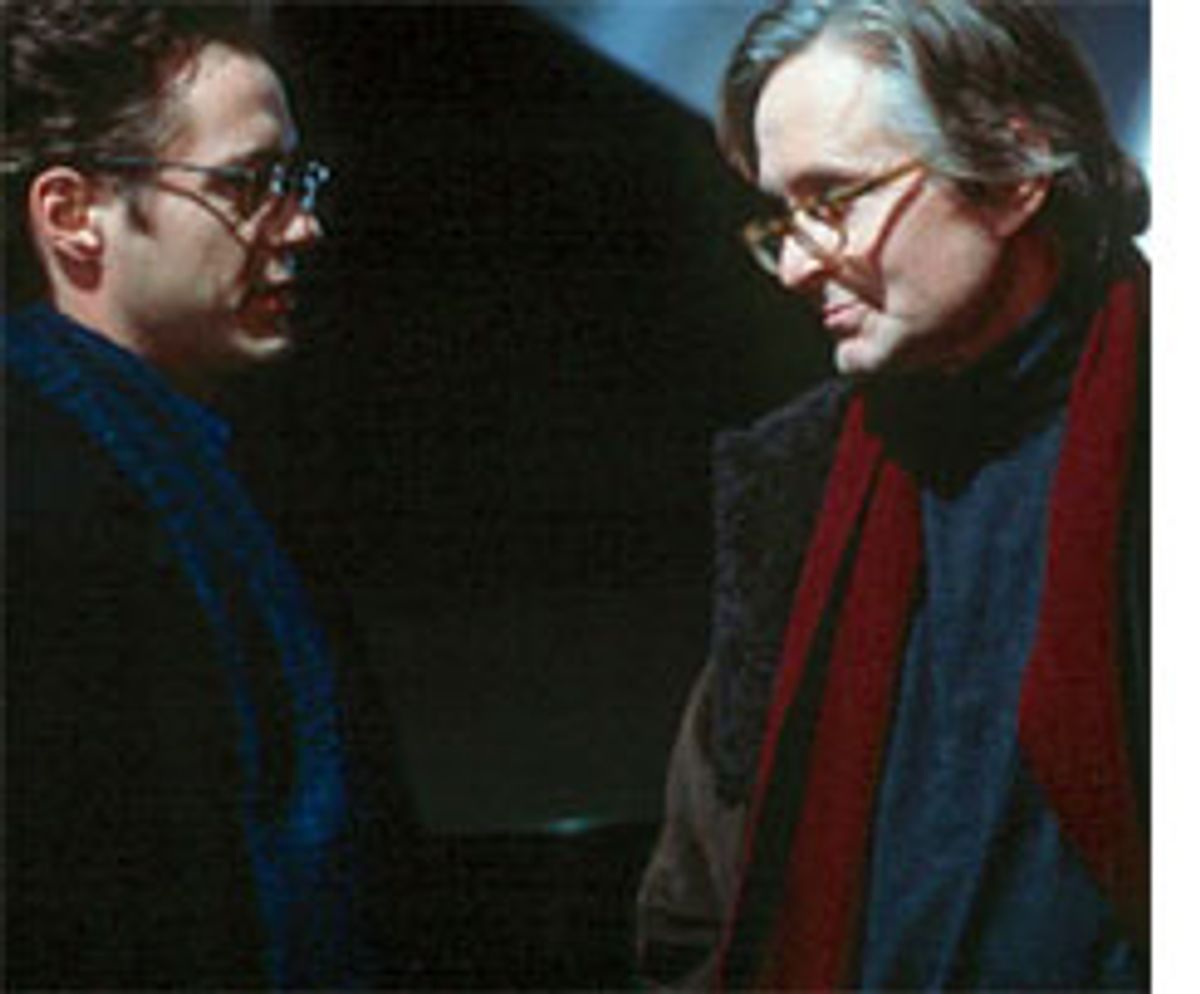 "All lousy on the movie front" read a USA Today headline on Dec. 20, for an article that posited 2000 as the worst year in movie history. I think 2000 has been pilloried primarily because 1999 was overrated as a renaissance for American movies: A dozen months ago, overblown pop-art objects like "American Beauty" and "The Sixth Sense" were hailed as milestones. I consider my top films of this year, "Quills," "Wonder Boys" and "Best in Show," more than equal to my favorite films of 1999 ("Three Kings," "The Insider" and "The Straight Story"). In 2000, if there weren't as many welcome strokes of movie art and entertainment, there were more than enough (including a trio of superb revivals) to stretch a 10-best list to 17.

"Quills" and "Wonder Boys" Directors salute writers, with delirious results. Philip Kaufman's "Quills" limns the Marquis de Sade as an irresistible object who meets an immovable force -- the moral guardians (and hypocrites) of Napoleon's France. Curtis Hanson's "Wonder Boys" pivots on a contemporary novelist who finds it difficult to keep his footing in the success-crazed culture of America. Kaufman's film is funny and fierce, Hanson's funny and melancholic. Both overflow with a love of words and of the actors who speak them -- Geoffrey Rush, Kate Winslet, Joaquin Phoenix and Michael Caine in "Quills," and Michael Douglas, Frances McDormand, Robert Downey Jr. and Tobey Maguire in "Wonder Boys."

"Best in Show" and "Dr. T and the Women" Taken together, these feats of controlled chaos by a young master and an older one -- Christopher Guest did "Show," Robert Altman "Women" -- occasion the question, "Which is funnier: the canine condition or the human condition?" The answer is the canine, but only by a snout. Although Altman's tale of high-class Dallas females and the one man who truly loves them (a dedicated gynecologist, played by Richard Gere) has been accused of misogyny, it's no more anti-female than "Best in Show" is anti-dog. Altman reserves his most scathing barbs for the guys in their lives, just as Guest does for the pooch handlers.

"Chicken Run" Nick Park and Peter Lord subvert the slang meaning of "chicken" in this salute to the heroism of oppressed and rebellious poultry. Puppet-animation bliss.

"Judy Berlin" and "Croupier" Two more movies about writers -- well, the first is actually about a would-be director with a novelistic sensibility. (Both premiered in the limited-run, 17-city Shooting Gallery series.) Eric Mendelsohn's achingly beautiful "Judy Berlin" is about a young Long Island man and stymied filmmaker (Aaron Harnick) afflicted with nostalgia for the recent past and a former schoolmate (Edie Falco, of HBO's "The Sopranos") fixated on a dream of finding glory in Tinseltown. Mendelsohn's hero is at once alienated from suburbia and in love with it -- a paralyzing mind state. The late Madeline Kahn plays his addled mother, in a swan song at once tremulous and soaring. Mike Hodges' "Croupier," by contrast, renders alienation without an ounce of gentleness, pivoting on a control-freaky would-be novelist (the coolly charismatic Clive Owen) who reduces his life to a tell-all book about the gambling world: "I, Croupier, by Anonymous." "Croupier" is melodrama with a satiric serration and an Oedipal kick, and the most intriguing neo-noir since "The Usual Suspects." (For a great straight shot of the old noir, see the new prints of Jules Dassin's "Rififi.")

"Panic" and "Forever Mine" How about "The Sopranos" redefined? Writer-director Henry Bromell wrote his screenplay for "Panic" -- not a diamond in the rough, but a diamond about a rough -- at the same time that David Chase wrote his pilot for the HBO series. This film's setup resembles a WASP-y "Sopranos" purged of ethnic and operatic excess. William H. Macy is heartbreakingly brilliant as the hit-man son of a hit-man father (Donald Sutherland). Macy can no longer lie to his wife (Tracey Ullman) or uphold the family business. But when a shrink (John Ritter) and an erotically quivering young woman (Neve Campbell) let fresh oxygen into Macy's airtight box, the outcome is an emotional conflagration. Paul Schrader's "Forever Mine," like "Panic," has played nationally only on cable. It's an exquisite doomed romance that moves from Miami to Westchester and from the early '70s to the mid-'80s. It stars Joseph Fiennes and Gretchen Mol as a Hispanic Byronic lover and his warm blond love who confront their destiny amid a backdrop of contract killing and drug trading -- and equally deadly political corruption.

"Paragraph 175" and "One Day in September" These dramatic documentaries make their points through sometimes subtle, sometimes startling juxtapositions, and are full of fresh reporting. "One Day in September" doesn't just retell how Palestinian terrorists took Israeli athletes hostage (and then massacred them) at the '72 Munich Olympics -- it divulges the abysmal security in the Olympic Village and the absence of firm anti-terrorist strategies in the West German government. "Paragraph 175," the best film yet by Robert Epstein and Jeffrey Friedman ("Common Threads," "The Celluloid Closet"), fleshes out the plight of gays in Germany before, during and after the Third Reich. It wrings mournfulness, anger and awareness out of the gay survivors' frank confessions of travails and delights; it shows how politics, ethics and temperament can complicate the most clear-cut issues of sexual preference and gender.

"Mifune" and "Black and White" "Mifune" is the least dogmatic film from the Dogma '95 movement. Director Soren Kragh-Jacobsen's camera follows characters through grubby interiors and gorgeous landscapes with the casual intimacy of a next-door neighbor. Kragh-Jacobsen tells a deft comedy of redemption about a Copenhagen businessman whose father is leaving him a dilapidated farm and a mentally impaired elder brother. He ends up falling hard for the housekeeper he hires for his brother -- a former call girl played by alternately soft and edgy Iben Hjejle (far more dazzling here than in "High Fidelity"). In its own unassuming yet cheeky way, this movie outlines the emptiness of upward mobility in an age of unapologetic capitalism. "Black and White" is a movie from James Toback ("Fingers") that out-radicals Dogma '95 in its mix of volatile written setups and improvisation". It illuminates the intersection of upper-middle-class, hip-hop-besotted white youths with street blacks yearning to sell their mystique for a slice of white America's pie. This group portrait of Our City, USA, with guns, basketball, bimbos and bribes, has the heat and deftness of Norman Mailer's journalism.

"Billy Elliot" and "Erin Brockovich" Young Jaime Bell's fleet feet and Julia Roberts' here's-looking-at-me décolletage bring dynamism to these underdog fables about a boy ballet dancer in a northern England mining town and a Southern California single mother who battles a giant utility company that poisoned a small desert community. In the hands of first-time feature director Stephen Daldry, the scenes between Billy Elliot and his miner father (Gary Lewis) and his dance coach (Julie Walters) heart-rendingly convey the weight and tension of parent-son and teacher-student relations. Director Steven Soderbergh wisely plays much of "Erin Brockovich" as the rowdy social comedy of a woman who refuses to button her sexuality into a proper paralegal's tailored suit. Roberts rewards him with gusto and sly knowingness, rising to unexpected peaks of empathy. For once her sympathetic frown is as eloquent as her toothy smile.

"A Hard Day's Night" and "Gimme Shelter" Some uncanny karma conjured the nearly simultaneous restoration of the Beatles' euphoric feature and the tragic documentary about the Rolling Stones at Altamont. There's no better way to bring in the true millennial year (2001!) than to watch the Stones' rock apocalypse and the Beatles' pop bacchanal back to back.