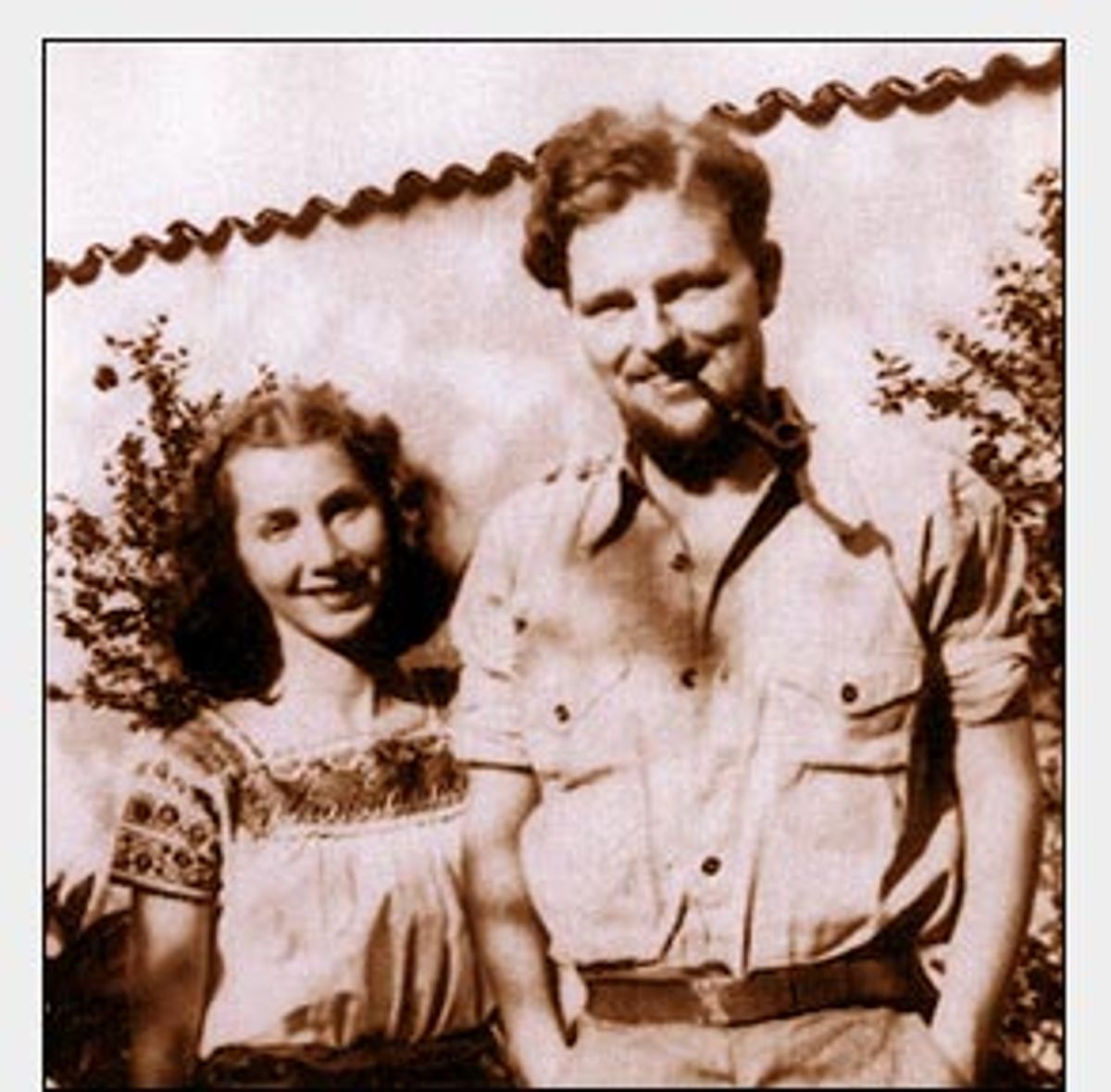 Pixyish and fair, with lively brown eyes that belie her age, Jan Gabrial, 89, pauses for a moment before making a surprising observation about her first husband, British novelist Malcolm Lowry, author of "Under the Volcano," one of the masterpieces of 20th century fiction.

"Malcolm was a very educated man, a brilliant conversationalist and an excellent athlete," Gabrial recalls. "He did have one problem though -- a very small penis. It didn't bother me. I felt we could work around it. But it bothered him. That was something he never really overcame. In his adolescence it had been a problem; his brothers teased him about it, apparently."

Gabrial mentions this by way of explaining the first major row in her marriage to the bibulous literary giant whose alcoholic excesses were portrayed with such marvelous accuracy by Albert Finney in John Huston's 1984 film adaptation of "Under the Volcano." Gabrial's new memoir, "Inside the Volcano: My Life With Malcolm Lowry," depicts the ups and downs of her six-year union with Lowry from 1934 to 1940. The first of the downs came a month into their life together, when Lowry discovered and read through Gabrial's diaries. There she had written frankly of Lowry's appendage.

"Diaries are personal things," explains Gabrial, as if the argument had occurred yesterday. "I was annoyed and disturbed, as was he. It was probably my fault for not keeping them under lock and key, but I hadn't thought that would be necessary. Fortunately, by about 2 in the morning, we had put it all to rest."

Nevertheless, the inner demons that seemed to be part of Lowry's personal cosmology pursued the couple with increasing intensity as they moved from England to France to New York and finally to Cuernavaca, Mexico, where Lowry wrote the first draft of "Under the Volcano," based in large part on his life with Gabrial.

Drawn from her diaries and letters of that era, Gabrial's memoir depicts the couple's love affair in intimate detail and with an engaging literary style that spares neither herself nor Lowry. In "Inside the Volcano," Lowry is both handsome man of letters and hopeless drunkard. He's the kind of fellow who could write long, amorous epistles capable of wooing the young Gabrial as well as a congenital barfly with a thirst so prodigious that he would drink almost anything he could get his hands on: after-shave, cleaning products, embalming fluid, you name it.

And he could be a mean drunk. At a New Year's Eve party in Paris just prior to his marriage to Gabrial, he almost single-handedly wrecked his host's residence during one of his more outrageous tears, pouring wine over his fiancée and getting into fisticuffs with a fellow he'd wrongly accused of making a pass at her. In private, he could be verbally abusive, with a threat of violence behind his words. Lowry's second wife, Margerie Lowry, reportedly suffered physical abuse from him, but Gabrial denies that Lowry ever struck her, though she was afraid it might happen.

"Initially, when we were in Europe, he drank so heavily that it frightened me. You have to remember, I was still in my early 20s. And though I had traveled all over, I had never known an alcoholic. We were living in Paris, and I'd go to bed at 10 or whatever. I'd hear the door banging when he came home from his rounds at maybe 1 or 2 o'clock. He would hover over my bed. I remember one time him saying, 'Dormez. Le diable est mort.'

"I wasn't asleep, but I kept myself looking asleep because I didn't know what to expect at that point. It could get a little hairy," confides Gabrial. "I could have invited blows, of course, but I was very wary. You don't wave a red flag in front of a bull, you know."

Gabrial is quick to point out that when Lowry wasn't drinking, life could be grand. He enjoyed sporadic periods of sobriety, and while living in Cuernavaca, the pair would rise early in the morning, sit down for breakfast and still be talking at noon. A former actress with literary aspirations of her own, Gabrial at some point realized that she had wedded one of the greatest creative talents of her generation -- a writer on a par with William Faulkner and James Joyce, and one who could no doubt match each jar for jar.

Similar to other artists, Lowry cultivated his own misery like some poisonous, hothouse flower, its tendrils knotted permanently about his heart. After the manner of his protagonists, he would disappear from family and friends for extended gin- or tequila-drenched explorations through the gutters of New York or Mexico. Darkness beckoned him, and no obstacle was too great to keep him from melding with that darkness, be it delirium tremens, the destruction of his first marriage or the mental ward at Bellevue, where he did a stint while he and Gabrial lived in New York.

Death claimed Lowry in 1957 at the age of 47. After a quarrel with his second wife, he apparently overdosed on a mixture of gin and barbiturates and collapsed on the floor of the cottage in Ripe, England where the two were then living. Authorities labeled his demise "death by misadventure." Whether it was suicide, accidental death or something more sinister has never been determined with any finality.

"Malcolm's death, to me, isn't quite explained," says Gabrial. "Margerie was in trouble because she was suspected of having a hand in it, but somehow that got hushed up or whatever. I don't believe Malcolm would commit suicide. He was too much in love with the English language."

Though Lowry's death remains somewhat of a mystery, alcohol was most certainly an agent in his passing. I ask Gabrial if she thinks Lowry might have suffered from manic depression and therefore self-medicated with alcohol.

"We know a lot more about that today than we did back then," she muses. "But this was also tied in with his being a writer. He wasn't Joe Blow. I think when you're trying to sum up any artist whose work you admire, you have to realize that your reactions to certain episodes would be very different from what his reactions may have been. He was, in a way, a lost soul."

Gabrial finally left Lowry in 1937, unable to deal any longer with his drinking. Offered a job as a script assistant by a friend's agency in Hollywood, she departed Mexico, leaving Lowry to sink into an abyss of drunkenness and squalor.

"The thing with the alcohol was troubling to me," she says. "If I had stayed with Malcolm, I would've become an alcoholic also. He couldn't take just one drink. And when you're with someone like that who's drinking day in and day out, you can't sit on the sidelines. Either you have your part in it, or you salvage yourself."

The pair stayed in contact, yet drifted apart. The agency Gabrial was working for floundered, and she went on to work as a personal secretary to stars like Jimmy Stewart and Olivia de Havilland. One day in 1938, Lowry showed up drunk on her porch in Los Angeles, like a lost puppy, and Gabrial helped him get into a sanitarium. He wanted to reconcile with her, but Gabrial asked that he give up alcohol for at least two years as a condition. Lowry refused.

Lowry met his second wife, Margerie, around this time, eventually moving with her to Dollarton, British Columbia, where they seemed to achieve a brief spate of happiness, living in a seaside shack they had fashioned themselves. Gabrial tried to stay in contact with Lowry after their divorce was finalized, but he refused to see her. Gabrial married again, staying with her second husband until his death more than a decade ago.

"Under the Volcano" was at last published in 1947 to tremendous acclaim. The character of Yvonne Firmin (played in Huston's film by Jacqueline Bisset), the wayward wife of Geoffrey Firmin, former British consul and incurable drunkard (Albert Finney), was based largely on Gabrial, though it was certainly influenced by Margerie's presence during the constant rewrites of the novel. Gabrial recognizes many of her experiences in the book, yet states cryptically, "I think my own reactions to some things have varied from Yvonne's."

Gabrial penned a short story based on her experiences with Lowry. Titled "Not With a Bang," it first appeared in 1946, but she waited until now to publish a memoir of her troubled relationship with her illustrious ex. A number of Lowry partisans have previously suggested that she was cruel and faithless in her marriage, charges that Gabrial vociferously denies. However, even Lowry biographer Douglas Day, who accepts some tales of Gabrial's alleged adulteries, states sympathetically in "Malcolm Lowry: A Biography" that Lowry "turned out to be more than [Gabrial] could handle -- more, indeed, than anyone ought to have to handle."

Ultimately, Gabrial's memoir is so true to what's known of Lowry and their relationship both from biographies and Lowry's fiction that I see no reason to question the accuracy of her account, based as it is upon her diaries and letters. The slim volume, like a yellowed picture preserved in a locket, presents readers with as familiar a portrait as they're likely to get of Lowry at this late date. Still, the question arises: Why a memoir now, so many decades after the fact?

"There's been a lot of misunderstanding," Gabrial remarks, the afternoon light waning in her modest home situated near the border of Los Angeles and Ventura counties. "With people writing books about Malcolm and I, I just wanted to make sure that among all the other versions that have come out, my version was among them."