Skeletons in the Cabinet

Democrats need to work with Bush. But they don't need right-wing dinosaurs like John Ashcroft and Gale Norton. 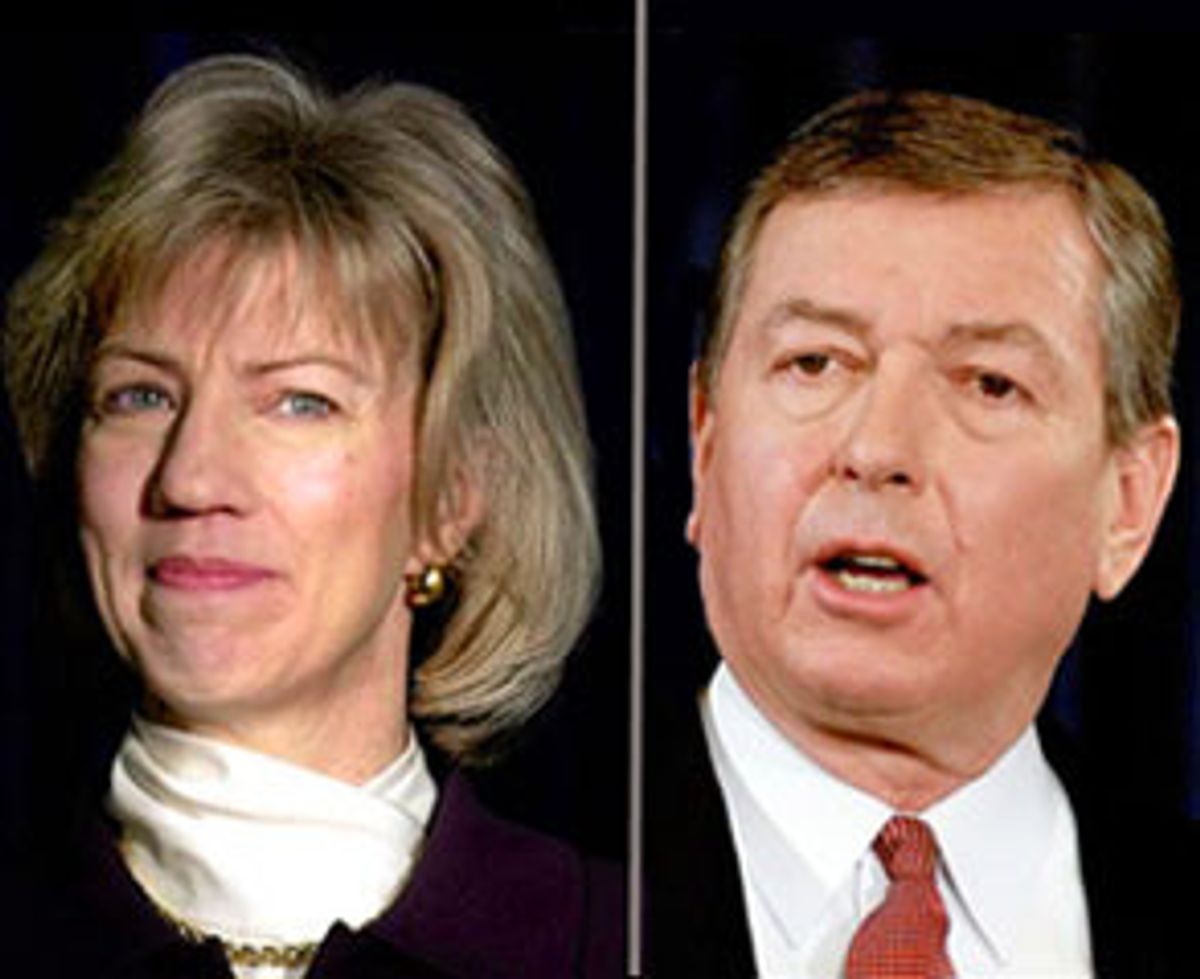 George W. Bush constantly assured us during the election that he was a new breed of Republican -- a "compassionate conservative." He promised to reach across party lines to work with Democrats, just as he had in Texas. There would be no manifestos and tantrums à la Newt Gingrich, no secret Reagan-like plots to prop up "freedom fighters." The Bush years, he and his handlers soothingly insinuated, would be kind of like the Clinton years, but without the sleaze -- genial, charming, reassuringly centrist.

After Bush's dubious "victory," there was reason to think he would in fact move to the center. After all, he had lost the popular vote by more than 500,000, and likely lost Florida and the Electoral College too; it took the timely intervention of five conservative Supreme Court justices to install him in the White House. Immediately afterwards, he at least sounded like a chastened man; his victory speech dutifully struck the chords of reconciliation and humility. And with a large percentage of Americans unconvinced of the legitimacy of his election, it seemed quite possible that Bush would reach across the aisle.

He did -- but only to flip Democrats the bird.

Acting as if his tainted election was a sweeping mandate -- Andy Warhol's 15 minutes of fame having apparently been replaced in this country by 15 minutes of memory -- Bush blithely turned to his party's far right wing for two of his most critical Cabinet appointments, nominating Bible-thumping, pro-gun, anti-abortion, Confederacy-praising Sen. John Ashcroft as attorney general and pro-growth, pro-oil, anti-regulation Gale Norton to head Interior.

Notwithstanding his announcement Tuesday that he was appointing Clinton's commerce secretary, Norm Mineta, to the relatively minor post of transportation chief, Bush's Cabinet picks have a distinctly rightward tilt. In fact, now that his "compassionate conservative" wrapping paper has been removed, Bush looks a lot like your basic reactionary Texas oilman. Drop your pants, America -- what you need is a little authoritarian morality! (Whack!) Environmental problems? Hand me my chainsaw!

Imagine if President Clinton had done something similar -- choosing, say, Barney Frank to head Justice and Ralph Nader to run Interior. "Apoplectic" would be a gentle word to describe the reaction of GOP stalwarts. Long knives would be sharpened, thumb screws polished to a bright sheen, Iron Maidens lovingly oiled. The nominees would be put through a brutal and humiliating confirmation gauntlet before being terminated.

Yet the Democrats, confronted by perhaps the most reactionary Cabinet appointments since James Watt and Ed Meese -- made by a president with even less claim to a mandate than Clinton -- seem prepared to simply wave Ashcroft and Norton through, in the name of Capitol Hill collegiality and a honeymoon-period deference to presidential prerogative. Sen. Joseph Biden, a key Democrat on the Judiciary Committee, said, "Unless there's something I'm unaware of, I'd be inclined to vote for him, even though I will have significant questions about his views on civil liberties, civil rights and criminal justice issues." It's true that Sen. Chuck Schumer, D-N.Y., waved a warning flag about Ashcroft, saying, "I think his confirmation is hardly a done deal ... He is far and away the most troubling of all the choices," but such voices have been rare.

Certainly, collegiality and a certain measure of deference to a new president are worthy values. It would be wrong for Democrats to try to sabotage Bush's presidency from the outset -- although, considering the savage treatment Republicans gave Clinton from day one of his administration, hardly novel. But in their laudable desire not to be mean-spirited, the Democrats are on the verge of becoming spineless.

"Advise and consent" is not simply a rubber-stamp phrase. It's a vital and necessary function. Republicans are still seething over the Democrats' rejection of Robert Bork for the Supreme Court -- but considering Bork's subsequent extremist ravings in right-wing journals, does any Democrat who worked against his confirmation doubt that he or she did the right thing?

Even if Bush had won a resounding victory, there would be ample reason for Democrats to reject Ashcroft and Norton as being too far outside the mainstream to hold such vital positions. (In Ashcroft's case, his disgraceful role in leading the fight to kill the nomination of Judge Ronnie White, the first black to serve on Missouri's Supreme Court, as a federal judge would by itself be sufficient cause to disqualify him for the job of the nation's highest lawman.) But considering the tainted nature of Bush's victory, his selection of such ideological extremists can only be called shameless -- and contemptuous. Christian virtues are well and good, but it's a bit much to expect Democrats to turn the other collegial cheek when they've just been sucker-punched.

If Bush's appointments were shameless, from a hardball political viewpoint they were shrewd. Why accommodate the enemy at all? Why not take a maximalist approach and start with the most extreme and unpalatable choices? If the opposition caves, you've got them on the run from the beginning. If they fight, you accuse them of being obstructionist and of not giving your administration a fair chance. And if you have to yield, you still have ample latitude to pick a somewhat less noxious conservative.

Confronted with these in-your-face tactics, the Democrats have every ethical and political right to play the same game. It isn't a matter of being ruthless partisan hacks, or turning into pathological Bush-haters -- leave that poisonous sewer for Rush Limbaugh and the demented Clinton-hating wing of the GOP to swim in. When Bush does something good, he will deserve the Democrats' support -- and if his presidency turns out to be a success, he will have earned the praise of the American people.

But if the Democrats have the obligation to work with President-elect Bush for the good of the country, they also have the obligation to represent the values and beliefs of their supporters, who outnumber Bush's. And that means letting Bush know that they are not going to roll over for nominations that will hand the environment over to big business, wink at anti-abortion terrorists and diminish our nation's commitment to civil rights.