"The Adversary" by Emmanuel Carr

A new book probes the case of the phony doctor who killed his family rather than confront a life of lies. 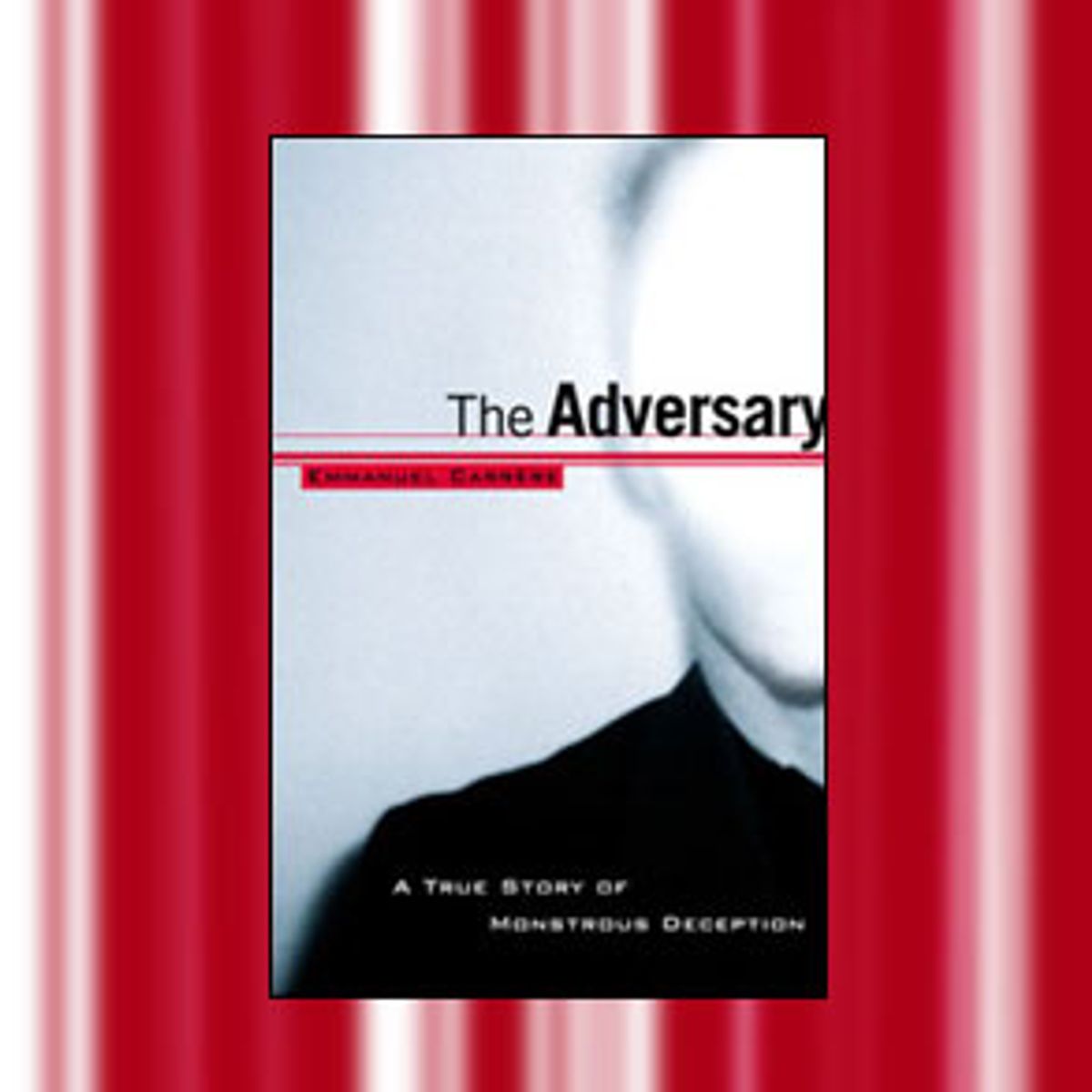 Who would have thought that something as primal as a homicidal spree could be so shaped by national character? In America, the crimes (and the trials) that attract the most attention roil with crude, tabloid emotions and the garish fixations of our culture: They're about race (O.J.), the battle between men and women over blaming rights (Michael Kennedy Smith, the Bobbitts, O.J. again) and -- our favorite scare show theme -- the horrendous abuse of children (Susan Smith, the Menendez brothers, JonBenet Ramsey).

The crime that transfixed France in the early '90s, however, was a far subtler and more existential puzzle. In 1993, Jean-Claude Romand, an eminently respectable, mild-mannered physician who worked as a researcher for the World Health Organization, killed his wife and their two children in their home near the Swiss border, then drove to a nearby town, where he murdered his parents in the house where he was raised before returning to his own home, swallowing a fistful of (defunct) Nembutal tablets and setting the place on fire. While Romand lay unconscious, investigators discovered that he did not, in fact, work for WHO, that he was not even a doctor and that for 18 years he had been funding his family's comfortable, bourgeois lifestyle with money that his parents, in-laws and other relatives had handed over to him to invest.

Quickly abandoning the notion that Romand's false life covered up a reality of arms trafficking and espionage, authorities concluded that when he was supposed to be working at WHO, he had spent the days, in the words of one newspaper, "off wandering, alone, in the forests." It was that line, that image, that hooked Emmanuel Carrére, a commercially and critically successful French novelist who had just completed a biography of American science fiction writer Philip K. Dick. Carrére wrote to Romand and eventually received both the murderer's permission to write a book about the case and his consent to meet with the author. Carrére also attended Romand's trial.

Although Romand had the blood of five people on his hands (he'd attempted, but failed, to kill his Parisian mistress as well), the murders merely horrified Carrére (as he explains in somewhat conventionally melodramatic terms). What fascinated the writer was the false doctor's strange existence prior to his infamous crime: "What I really wanted to know: what went on in his head during those days he supposedly spent in the office, days he spent, it was now thought, walking in the woods."

Romand's story does have a weirdly symbolic quality, and this slender, unsettling book often reads like one of those enigmatic midcentury French novels, say Albert Camus' "The Fall," a book Romand quoted at length in a letter to a female admirer. (Perhaps French murderers are exceptionally better read than ours, or perhaps 18 years of killing time while you're pretending to be at the office gives a guy lots of time to catch up on the classics.)

Romand could easily have become a real doctor. Instead, devastated by a romantic rejection (from the woman who would eventually become his wife), he missed the final exams of his second year at medical school and spent the summer moping in his studio apartment. For some reason, Romand told his parents and friends that he'd passed the exams, and this first big lie planted the seed of an entirely fabricated career. He continued to attend classes, to study with his girlfriend (who had taken him back) and to juggle the school's bureaucracy to the degree that he always had a student I.D. card. "He spent as much time and energy pretending to become a doctor as he would have to become one in reality," Carrére observes.

Romand's life became a parable of human perversity, in which the dread of confessing to that initial lie (Carrére speculates that Romand might have feared "debasing" himself with such a confession or that, sunk deep in lethargy, he might have simply felt "too tired" to explain) necessitates ever more lies. How did he get away with it? Initially, Carrére suggests, it was because Romand was such a nebbish, so unassuming, that no one paid much attention to him. He was the opposite of those stereotypically flashy and charismatic pathological liars who leave in their wake a string of bilked widows and divorcées complaining to "America's Most Wanted"; Romand was a real Nowhere Man, sitting in his nowhere land, making all his nowhere plans.

But not, alas, for nobody. Romand's extended family came to admire him as the epitome of the solid citizen, and he and his wife acquired a circle of friends, all of whom were flummoxed to discover the truth. If Romand is baffling, he is nevertheless consistent. When he had run through everyone's money (including his mistress's -- she, along with everyone else, considered him a financial whiz) and was facing imminent disgrace, he chose to kill everyone who depended on him most, rather than be confronted with their disappointment. (He contemplated faking his own death, or vanishing overseas, according to Carrére, but dismissed that idea because "shedding the skin of Dr. Romand would mean ending up without any skin, more than naked: flayed.") Suicide was always part of his plan, but in the end he seems to have lost his nerve, and the seriousness of his intentions in that regard became a key question during his trial.

But, like most people who commit monstrous crimes, Romand ultimately proves unforthcoming about his state of mind during the fatal moments. As he stocked up on weapons, "it was as though the idea [of killing his wife and children] didn't exist," and he doesn't remember bludgeoning his wife with a freshly bought rolling pin. The psychiatrists who interviewed him later "saw him sob and show emphatic signs of misery, but they couldn't say whether he was truly suffering or not. They had the uneasy sense of observing a robot deprived of all capacity to feel but programmed to analyze exterior stimuli." Perhaps it was this void, felt at the core of the cathedral of lies Romand built around himself, that drew others to him, people who made him a receptacle of their own wishes. One of these was a devout Christian who visited Romand in prison and believed many of the more preposterous stories he told her, despite Carrére's warning that "he lies. That's his mode of being, he can't do otherwise, and I think he does it more to fool himself than to fool others."

Carrére himself never can quite figure out how to approach his subject. The most forced passages in "The Adversary" parallel the author's life with Romand's -- Carrére was attending a parent-teacher meeting when the first murders took place; he has a son the same age as Romand's. But Romand's story is too outlandish to work as a commentary on the disaffection of bourgeois life: He never really had such a life, and probably longed for it desperately. Carrére also takes pains to distinguish himself from the little cadre of supporters who constellate around Romand after he's sentenced and becomes, ever eager to please, a model prisoner and participant in a prayer club. Nevertheless, a hard-boiled reporter taunts the author for feeding the murderer's narcissism: "He must be thrilled that you're writing a book on him! That's what he's dreamed about his whole life. So it was a good thing that he killed his parents -- all his wishes have come true."

That dart must have struck its mark, for Carrére finally resolves that while somehow he understands "what went on in [Romand's] head during those empty hours dragged out in highway rest stops and parking lots" (does he? who could?), when it came to the actual killings, Romand's parents "had seen, taking on the lineaments of their beloved son, the one the Bible calls Satan, 'the adversary.'" Romand's current piety must also be, Carrére says, the work of a Deceiver even more accomplished than Romand himself.

While it's not surprising that Carrére was drawn to Romand's story (one of Dick's favorite themes is the forging of identity), this oddly religious denouement, however telegraphed by the book's title, doesn't quite convince. Some of the more psychological explanations offered for Romand's behavior (he had used lies to fend off the lifelong threat of massive depression, and continues to do so; his narcissism made him view his family as mere extensions of himself, and the murders were a form of suicide) actually seem meatier. But what's most remarkable is that at no point does anyone probe Romand's childhood in search of a key emotional shock or a history of abuse. Such an omission would be unthinkable in America. In fact, Carrére relates that reporters covering the trial "mockingly suggested that at the bottom of the whole mess was the defendant's inadequacy in bed," which strikes me as a quintessentially French explanation for homicide; in childhood-obsessed America we'd assume that both the lying and any sexual dysfunction were caused by some early trauma.

What does work about "The Adversary" is the way that, despite a bit of devil-mongering here and there, Carrére allows Romand to remain fundamentally unfathomable. Even if we average citizens never go so far as to build a life of lies or slay the ones we love, we all sometimes say and do things -- craven, savage, courageous -- that mystify even ourselves. The bizarre extremity of Romand's behavior paralleled the degree to which he'd lost any sense of an authentic self within the labyrinthine false self he created to impress others. He went a long way down a path most of us have set out on at least once; his story shows us its final destination.