"Save the Last Dance"

Not good -- not even -- but Julia Stiles radiates and this urban teen movie takes a gutsy stand on black boys who date white girls. 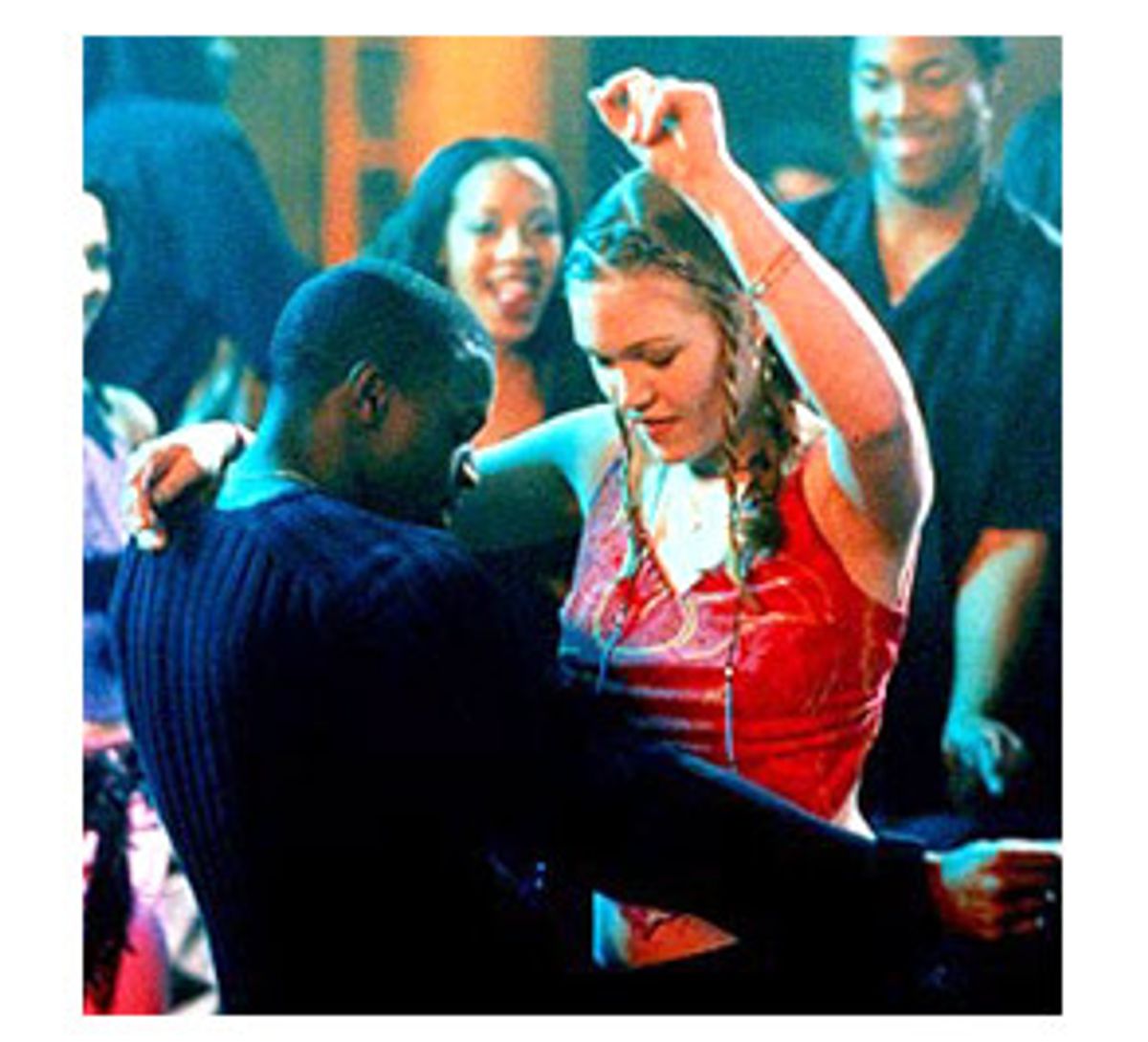 Julia Stiles is such a white girl that the idea of placing her in an almost all-black high school is irresistible. In "Save the Last Dance," a bad, friendly, enjoyable movie, Stiles plays Sara, an aspiring ballerina who stops dancing after her mother is killed in a car accident on her way to watch her daughter audition for Juilliard. After her mother's death, Sara moves to Chicago to live with her father (Terry Kinney), a jazz musician, in his South Side apartment. In most ways "Save the Last Dance" is a typical teen-movie drama queen role, but Stiles brings it her distinctive deadpan timing.

Stiles' few movie roles may not yet have demonstrated a very wide range, but she remains appealing because she's nearly a contemporary archetype. As Ophelia in last year's "Hamlet," as she drove her bike through the streets of Manhattan in thrift-shop clothes, carrying her love letters in a funky box-like purse that seemed more suited to a child than a young woman, Stiles projected the particular mixture of attitude and inexperience coming off of the young art-school bohos who hang around downtowns.

With her wide forehead and small features, her impassive face and the screw-you delivery in her flat voice, Stiles can seem totally disaffected from whatever's going on around her. In "Save the Last Dance" Stiles uses just that affect to play possum. When she hands some B-boy back the bull he's been dishing her, and does it with the sort of timing that's so natural it doesn't catch until the rebound, you realize that Stiles has been alert all along, quietly registering everything going on around her. And when her tough-girl face dissolves into that big toothy grin and those deep dimples, her delight is infectious because it's so unexpected.

"Save the Last Dance" follows an utterly predictable course: Sara has to overcome her guilt and rediscover the joy of ballet; her new boyfriend, Derek (Sean Patrick Thomas), has to avoid the temptations of street life to start on his dream of becoming a pediatrician; Sara and her always-distant father, Roy, have to learn to love each other. There's never a moment when you doubt the characters will follow the course preordained for them in Duane Adler and Cheryl Edwards' script, and there's nothing particularly distinctive or imaginative in Thomas Carter's direction. Worse, when Derek begins to give Sara lessons in how to dance to hip-hop, Carter makes the usual stupid mistake of cutting up the dance scenes with editing so that we can't see the characters' whole bodies at one time -- a particularly unfortunate choice because Stiles, who has a dancer's build, moves gracefully.

So why bother with "Save the Last Dance"? Because for all its dumb clichés it offers the basic appeal of teen movies: the pleasure of watching kids be kids, acting as they do among themselves instead of how parents and teachers expect them to act. Sure, it's a Hollywood movie version of kids, but it doesn't feel unduly sanitized or sunshiny false. The banter and remarks that the characters toss back and forth with practiced familiarity, whether they're gabbing between classes or talking in the neighborhood club, have some of the unexpected comedy you hear listening to kids mouthing off to each other on the subway or outside a convenience store after school.

That's why the subplot involving Derek's buddy Malakai (Fredro Starr), who's slipping into living out the gangsta life, is so unnecessary; it feels like a sop to some exec's idea of urban reality. Those parts have a way of contradicting so many of the offhand, nicely nonjudgmental moments, like when Sara uses a fake I.D. so she can go clubbing with her new friends, or Derek's sister Chenille's (Kerry Washington) infant boy, or a fight in a club that makes everyone split because the cops will hassle whoever they find hanging around.

One thing the movie doesn't shrug off, and where it shows some genuine guts, is in its take on black prejudice toward interracial relationships. By the time the movie's villainess (Bianca Lawson), who has designs on Derek, slits her eyes at Sara and initiates a cat fight, you've expected the blowup. It catches you completely by surprise when Chenille, who has become Sara's best girlfriend, turns on Sara for taking one of the few good black men around, and for acting like nobody's bothered by it. Last year I did a piece for Salon bemoaning the dearth of interracial relationships in movies and television. Almost all of the angry letters I got were from black women telling me how tired they were of seeing black men with white women, both on screen and in real life. There was honest hurt in those letters. The women who wrote me said they felt that black men who had white girlfriends or wives were telling black women that they weren't attractive enough or classy enough for them. Those are some of the same arguments that Chenille makes to Sara. And "Save the Last Dance" has the nerve to stand up to them, to say that finally, hurt feelings and low self-esteem are as lousy a reason as any for suggesting that people should "stay with their own kind."

The movie has to take that stand on interracial relations because it realizes that the races borrowing from and imitating each other lies at the heart of the pop culture that binds the characters together, at least in teenage culture. When Chenille does a quick makeover on Sara before they go to a hip-hop club, tying Sara's Gap top around her head like a mini-turban and bedecking the girl with her own hoop earrings, it's a joke at first -- a white girl who looks like she's seen one too many Lauryn Hill videos. But Sara looks good, and you realize that she's simply imitating the premier pop look of the moment, the way girls before her tried to look like Chrissie Hynde or Joni Mitchell or Lesley Gore.

It's even funnier when Sara takes to the dance floor -- not as funny the "Soul Train" rump twister Cameron Diaz performs to "Baby Got Back" in "Charlie's Angels," but then, few things are -- and tries to adapt her ballet moves to hip-hop dance. But there's nothing mean-spirited in the way the movie pokes fun at her or in the laughter of the black kids in the preview audience I saw it with. The movie is smart enough to show the way black and white kids bait each other and to know that much of it is just kids getting in each other's faces, like when Derek taunts Sara after her first visit to the club that she's never heard hip-hop before. Of course, he's playing on a silly racial stereotype, treating her as if she's a hick ofay -- is there any white kid in America who hasn't heard hip-hop by now? -- but that's part of the joshing challenge that leads to the scenes of him showing her his dance moves. And some of the best laughs in the movie come from Stiles trying to turn her white girl 'tude to hip-hop 'tude and cracking up at how silly she seems, even to herself.

"Save the Last Dance" doesn't have the same freshness or energy that made "Bring It On" such a nice surprise last summer, but it's alive to its young characters, to the hip-hop laid end to end on the soundtrack. (I particularly dug Chaka Demus & Pliers doing "Murder She Wrote" and K-Ci and Jo-Jo's "Crazy.") And it lets its young lovers work things out on the dance floor.

It's not a good movie; in a lot of ways, it's just terrible. You can't recommend "Save the Last Dance" to people who carefully pick and choose what they go to see, or who want every movie to provide guaranteed enrichment. It's a picture that's less about going to a movie than about going to the movies.

If you miss "Save the Last Dance," you won't be missing anything more than a few scenes of fleeting pleasure in a movie that, by Memorial Day, will likely be nearly forgotten even by those who see it. But I worry about losing the affection for transitory movie-ish pleasures, even if those pleasures don't amount to more than a funny scene, some clever dialogue or, here, the sight of two kids discovering themselves and each other as long as there's a record left to play.