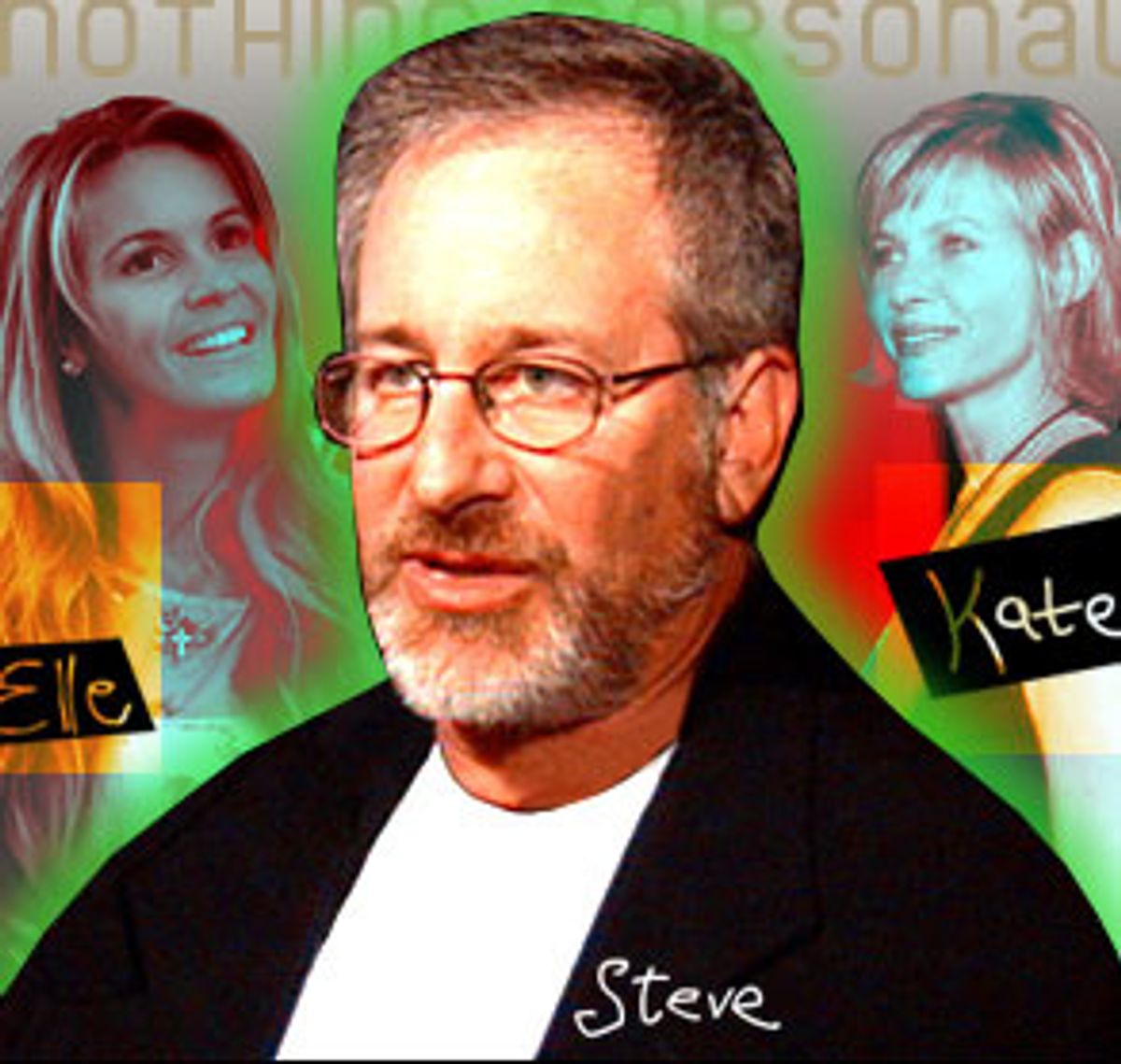 Posing in your underwear is hard, but kissing Kate Capshaw is harder.

"I'm self-conscious, so it was very, very difficult," Elle tells Us Weekly. On the bright side, she says, Capshaw is "a very good kisser."

But Macpherson's ringing endorsement might not mitigate the pain shooting through Steven Spielberg's heart. Capshaw confesses that her husband gets a little peevish when he sees her sucking face with someone else -- man, woman or extraterrestrial being.

"Does he mind me kissing someone else?" she inquires. "Yes -- resoundingly yes."

And it's not just the tonsil hockey that makes him squirm. It's the whole concept of letting his wife out of the house. "He always prefers when I'm not working," Capshaw confides. "I'm really running quite a large corporation here with the kids and the homes. While we are very blessed to have so much, someone has to keep it going, and going well. That would be me."

Pucker up and kiss that.

"I want him to reinvent the western. I think he's tits."

-- Brad Pitt on Mr. Madonna Guy Ritchie, who directed him in the film "Snatch."

Some people drink champagne. Some people go to parties. Some people just stay in with a good book. But Calista Flockhart rang in the new year in a rather unusual way. She adopted a child.

The "Ally McBeal" star watched the birth of her new baby boy on New Year's Eve, courtesy of his biological mother, a medical technician who already has four children.

"I have always wanted to adopt a child and I am overjoyed that I have been blessed with a beautiful and healthy son," Flockhart told the press after the National Enquirer broke the story, running photos of her, the baby and a diaper bag.

"Calista loves kids and plans to have more. Someday she'd love to get pregnant," a friend of Flockhart told the Enquirer. "But she doesn't have a man in her life at the moment, so she decided to adopt."

What, you mean that Garry Shandling rumor isn't true?

-- "Sex and the City" star Chris Noth dismissing the suggestion that his character could one day get his own show.

Then one day he was shootin' at some food, and up from the ground came some bubblin' crude. Prose, that is.

Kelly watched them doing it on the bed. There were brief flashes of nakedness from beneath the cover, and panting, moaning sounds from the girl's parted lips. Occasionally they rolled over, spilling the sheet and revealing a full view of bare buttock. Then he was on top, more active. The girl's breath now heightened into accelerated gasps, crescendoed into a wild little cry of ecstasy. There was a pause followed by diminishing convulsions, a relaxed creeping smile and stillness.

But 92-year-old Ebsen tells Wireless Flash News that he's not at all concerned that people might be shocked to find old Uncle Jed writing about "Kelly's well-formed, jeans-filling derrière."

"I don't use words that you don't find in any other book or motion picture," he says.

Really, what would Granny say?

Ack! It's looking more and more solid that Johnny Depp will star in "Confessions of a Dangerous Mind," the biopic based on Chuck "Gong Show" Barris' autobiography, in which he claims he secretly worked as a spy for the CIA. Where's that gong when you need it?

Double ack! Richard Hatch has been tapped to host a syndicated U.S. version of the BBC's "The Weakest Link" for NBC. According to the New York Times, Hatch will be called on to berate, mock and intimidate contestants to root out their weaknesses to get their fellow contestants to vote against them. Funny, we've never seen him act that way before.

It seems that thorn in Axl Rose's side will not go away. His stalker, Karen Jane McNeil, was arrested again on Jan. 8, after she was discovered in his Malibu, Calif., home. McNeil, who has encroached on the rocker's property six times in the past few years, is convinced that she is married to Rose and that she communicates with him telepathically. Earth to Karen ...