Babies for the highest bidders 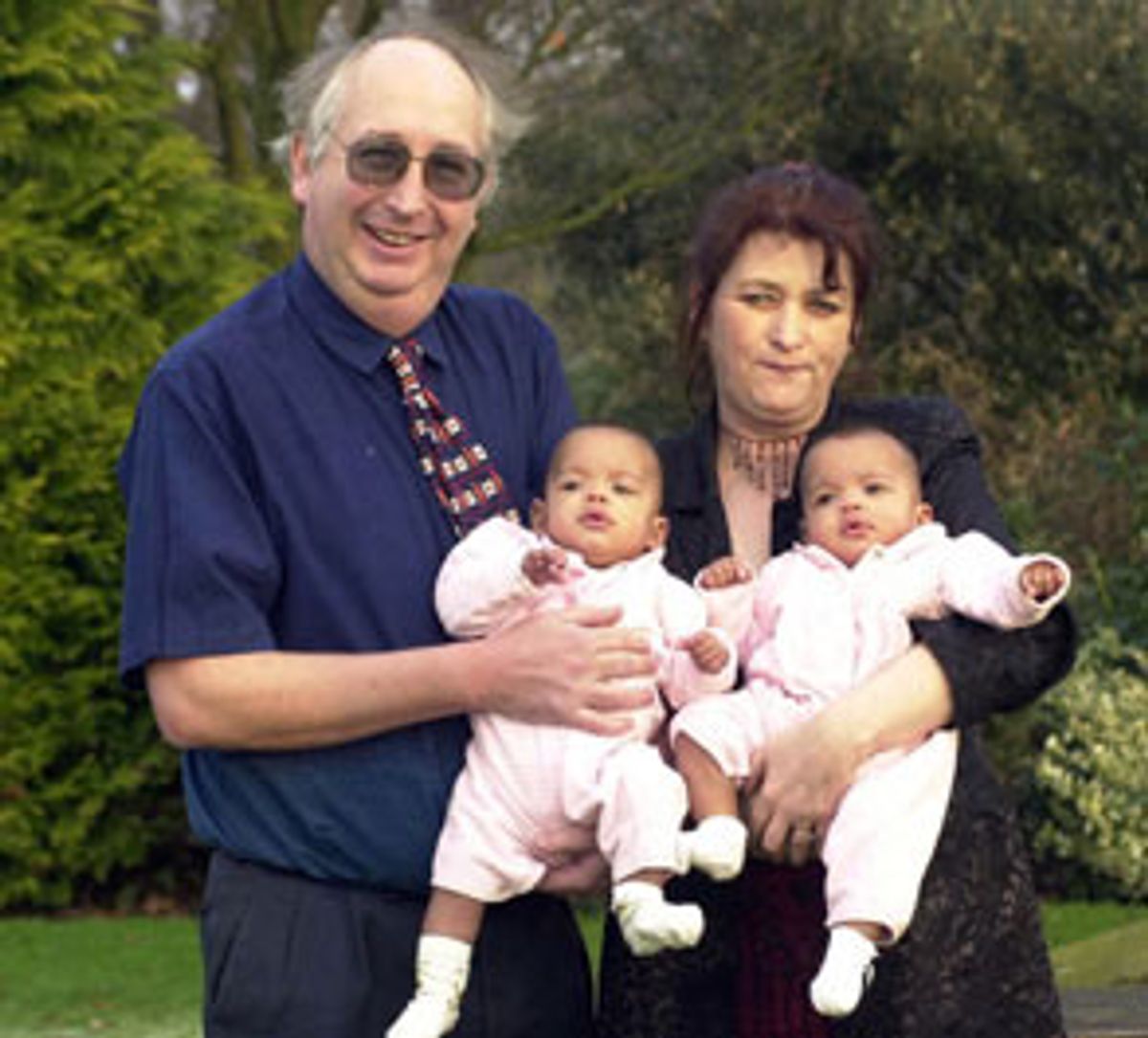 They are only 6 months old, but already the twin girls from Missouri have had at least two names each -- Kimberly and Belinda; Kiara and Keyara -- and at least as many homes. Now the infants are at the center of an international fight over who will raise them, an ugly tug of war that demonstrates what can go wrong in the private adoption business, where any person, with any type of background, can broker the placement of a child.

The Missouri twins' case is under investigation by the FBI, which is looking into whether fraud was committed by the adoption facilitator, Tina Johnson, who ran the Caring Heart adoption agency out of her San Diego home. Johnson reportedly brokered the twins' adoption to two couples, accepting $6,000 from Richard and Vickie Allen of California, and about $12,000 from Alan and Judith Kilshaw, a couple from Wales. (The couples found out about Johnson's services through her Web site, which has reportedly been since taken down.)

The babies lived with the Allens for two months, then returned to the birth mother, ostensibly for a few days to say goodbye. They were then handed over to the Kilshaws. And now the children's birth mother, Tranda Wecker, says she wants her babies back.

"This just highlights some of the horrors that go on," says Jane Nast, director of the American Adoption Congress, an organization that represents adoptees, birth parents and adoptive parents. "And it happens all the time. That's the thing that's most disturbing ... When there's money involved in an adoption, you can be sure there's corruption."

There are no numbers on how often incidents like this occur, but Nast and others in the field say it's become all too common -- the fallout of a business that has grown exponentially over the years with little oversight. In 1966, for example, when Nast adopted her child, she says private adoption accounted for only 10 percent of the placements. Now, public adoptions -- which are handled by agencies licensed by different states -- make up only about 20 percent of the total, according to Nast.

While the amount paid by the two sets of prospective parents in the twins' adoption is not unusual, there are no regulations stating how much a broker can charge for the adoption services, which leaves a lot of room for many adoptive parents to be bilked of their life savings, say critics. Sometimes prices can get into the six-digit range.

Adoption agencies licensed by the states have to show all of their paperwork and justify the costs to the judges overseeing the adoption cases. But private adoptions represent the wild, wild West: a field ripe for those trying to make fast cash since the parties involved -- the adoptive parents and the birth mothers -- are oftentimes highly emotional and desperate.

"There are big, huge bucks being made on the exchange of babies," says Karen Vedder, president of Concerned United Birth Parents, a national support group for birth parents, adoptive parents and adoptees. "It's like a black market. It's gotten totally out of hand and I'm just so glad that this has come up in the newspaper because this situation has been going on for too long and everybody has been turning their heads the other way."

Those who monitor private adoption say there is no shortage of stories of abuses and heartbreak. It is not unusual to hear a litany of nightmarish scenarios in which lawyers show up at women's bedsides right after they give birth, after being tipped off by a nurse that the mother was unsure whether she wanted the child; or half a dozen people pay the same broker for the same baby, or numerous couples pay all of the expenses of a women leading up to the birth of a child they never receive.

There are cases where adoptive parents aren't told that the birth parents are institutionalized or that the birth mother hasn't really relinquished custody of her baby in a court of law. Birth mothers are promised that they will be able to see a baby after it's adopted, only to find the broker's number is disconnected after all the papers are signed. And, of course, there are the children who get stuck in the middle of the custody wrangling. Adoption organizations say that the babies are the biggest pawns, and most vulnerable victims, of all.

"When I look at the pictures of those babies, and I see them in the arms of one couple in one picture and in the arms of the other in another picture, I am appalled at the confusion they are going through," Vedder says. "Once a baby is born, they are familiar with the mom's smell and heartbeat. Even though they can't verbalize what they're going through, they know they are being tossed around from one foreign surrounding to another. And it's an incredible toll on them."

In a private adoption, there is no guarantee that facilitators will take the usual steps that agencies take to safeguard the adoptive process. Although adoption rules vary from state to state, agencies usually take fingerprints of the prospective parents to see if there's a criminal record, and weed out those considered unfit. "Home studies" are conducted, in which agencies look at the prospective parents' salaries, education and goals in life as part of an assessment of their suitability as parents. The birth mother is counseled to make sure she completely understands the life-altering decision she is about to make; and an attempt to contact the birth father must be made.

With private adoptions, in many cases, all that is required is the fee involved, an attorney to handle it and the judge to finalize it.

"Either private adoptions should not be allowed anywhere or they should be regulated in all of the states," suggests Gloria Hochman, spokeswoman for the National Adoption Center, which specializes in the placement of minority and special-needs children. "Make attorneys that are doing this work go through an accreditation process and require adoptive parents to go through a training process and learn about what it's like to adopt a child."

Suggestions for adoption reform range from making it illegal to exchange money in an adoption and putting a cap on the amount a broker can earn, to having the states collect adoption fees and making sure all of the expenses involved are justified.

Some critics of private adoption, like Jane Nast, believe that they should be banned completely. In Britain, where the twins are now, private adoptions are not allowed. "It is illegal, completely illegal, in this country, for people to buy and sell babies or children, and that is entirely as it should be, because it is frankly a revolting idea," said Britain's Home Secretary Jack Straw in response to the twins' case.

Only accredited agencies can facilitate an adoption in Britain. In the United States there are a few states, like Delaware, where private adoptions are similarly not allowed. Tara Miller, district supervisor for the Delaware office of Adoptions From the Heart, says that the agency has to make sure everything is in order for each adoption, or else it risks losing its state license. "We have to work under certain guidelines that the state prescribes," Miller says. "It's a very emotion-packed situation and people are vulnerable, on both sides. Both adopting a child that a family desperately wants and relinquishing a child are very emotional acts. And that's why it's important for someone to be there to handle it in an ethical way."

It's also difficult to determine how often unethical practices occur in private adoptions because many adoptive parents don't come forward to report it, say adoption agencies. "It happens daily and if the deal works out and the couple gets the child, they will keep their mouth shut because they got what they want, which is the baby," says Robert Emmons, chief of the criminal fraud bureau at the Nassau County, N.Y., District Attorney's office. "It's only in the cases where the deals go bad that the law enforcement ever hears about it." Often the prospective parents have been trying for years to conceive a child and their attempts at in vitro fertilization have repeatedly failed. Some parents are pushed to a point where they'll do anything or pay anything -- and shut up about it -- in order to add a baby to their family.

And couples worry that if they do come forward, they will lose their chance at ever getting a child -- which is almost what happened to Lauren and Bill Schneider of Stillwater, Minn. After years of trying to conceive a child, they finally gave up, decided to adopt privately and registered with an online adoption service. A lawyer named Tamas Kovacs finally got in touch with them and told them about a baby named Nikolett from Hungary. The only hitch: It would cost $60,000.

The couple contacted law enforcement and participated in a sting operation, in which Kovacs was arrested. He later pled guilty and is serving his three-year sentence in an upstate New York prison. (He had also contacted several other couples about the baby.) But since New York law gives preference to residents who live in the state to adopt the child, the Schneiders faced a year and a half battle to keep Nikolett. In August of last year, they finally prevailed.

"The problem with this is that there isn't really a screening process to see who would be the best parent: It's simply the contest of who will pay the most money," says Emmons, who oversaw the bureau that prosecuted Kovacs. "Unlike the regulated adoption process, which is centered on the best parent, money becomes the sole issue in private adoption. Someone could be wealthy and not a good human being, but because they are wealthy, they win the lottery and get the child."