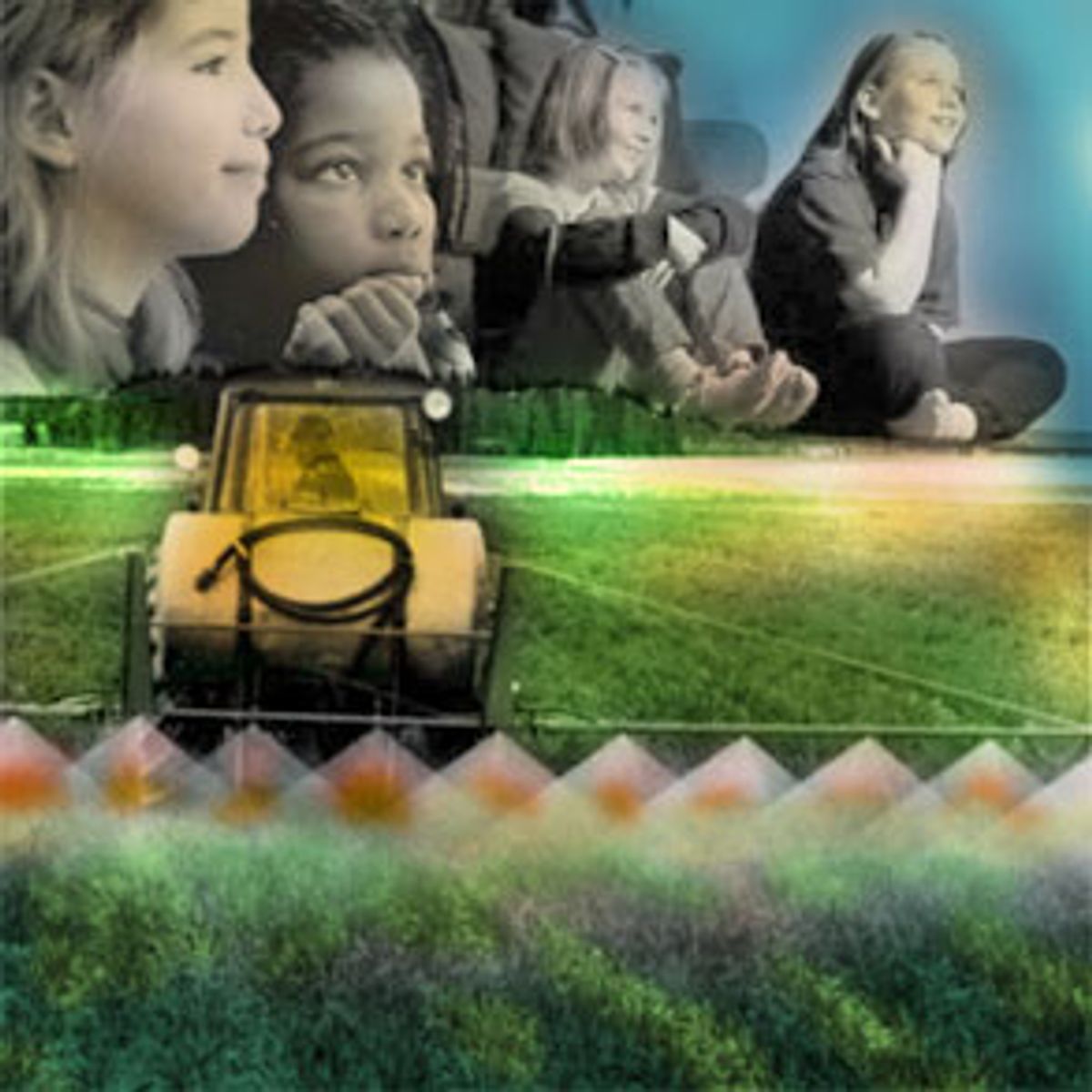 No one could taste the additive in their hamburgers or milkshakes. They couldn't see it or smell it. And never in their worst nightmares could they guess what was lurking in their meat and dairy products. The year was 1973, the place Michigan. The contaminant was a fire retardant, laced with polybrominated biphenyls (PBB) that got accidentally mixed into cattle feed instead of a nutritional supplement. Roughly 4,000 people were exposed.

Decades after one of the largest food contamination incidents in American history, the health effects are still not known. But according to a new study, one of the scariest ramifications of the poisoning has been for girls who were exposed in utero and through breastfeeding. They started menstruating at an average of 11.6 years old -- a full year earlier than others who were not as highly exposed.

This finding, the first in an ongoing study at Emory University that looks at the possible reproductive effects of the chemical exposure on women, provides one of the first clues about what happens when humans come into contact with hormone-disrupting compounds. More specifically, the study has bolstered -- with rare research on human subjects -- the belief of many researchers that environmental estrogens, including PBBs like this one, may be the culprit for what is believed to be an alarming trend of early sexual maturity.

Previous studies have provided evidence of the impact of environmental estrogens -- but mainly on animals. Lab rats consistently hit puberty early after being given doses of synthetic estrogens, for example. Most of the evidence of a mysterious race to puberty in American girls comes from anecdotal tales about the physical and hormonal mayhem hitting girls too young to have had any education about what is going on in their bodies.

The idea that environmental estrogens are the cause of this early and tumultous development is controversial, but many researchers are convinced that the two are definitively linked, at least as one piece of the pubertal puzzle.

"Because we did find this association with PBB exposure, it makes it more likely that other endocrine disruptors may be causing similar effects," says Michele Marcus, Ph.D., author of the Emory University study and associate professor of epidemiology there. "But that would have to be determined in other studies." Luckily, the Michigan residents' exposure was a freakish accident and most people will not be exposed to PBB. But they are very similar chemically to polychlorinated biphenyls (PCBs), which were widely used in electrical insulation in the 1970s and are still found in the environment.

Hitting puberty at an earlier age is believed to lead to many types of medical problems later in a woman's life, including increased risk of ovarian and breast cancer and early menopause. When the pubertal clock speeds up, "Everything gets shifted forward," says one researcher.

Although nothing biologically dangerous is believed to immediately occur with early puberty, the psychological effects cannot be underestimated. A girl can be teased mercilessly when she starts to develop before her classmates; or so embarrassed when she gets her period the first time that she keeps it a secret. A lack of sex education at such an early age also creates fear and confusion for girls who literally don't have a clue as to what is happening when they start to bleed.

Marcia Herman-Giddens is believed to have first documented the trend to earlier puberty in an oft-cited 1997 study that appeared in the journal Pediatrics. She found that white girls were entering puberty at 9 years, 9 months, and African-American girls at 8 years, 1 month. The study was based on 17,000 girls, ranging from 3 to 12 years old. Critics of the study point out that Herman-Giddens did not find a change in the average age of menarche (the onset of menstruation) -- 12 and a half -- which hasn't changed in more than 50 years. In addition, critics contend that a girl starting development at 8 years old is not necessarily "abnormal."

Herman-Giddens, however, believes that these arguments do not invalidate her finding that girls are entering physical puberty much earlier, regardless of when they start their periods.

"It's sad," says Herman-Giddens now. "I think children ought to be children a little longer than the third grade. And if it keeps getting younger and younger, it will make the whole public health issue even more of a crisis than it already is. We don't know the long-term health effects that could occur."

Since the first reports about Herman-Giddens' findings, the idea of little girls becoming little women at a disturbing pace has become something of an obsession for researchers, the media and environmentalists, who have been frantically theorizing about what may be the cause. Herman-Giddens believes it's possible that even crude sexual imagery in magazines, on TV and in film could be provoking early puberty. Blame also has been assigned to the weight increase in American children and, perhaps most bizarrely, to little girls picking up stepfathers' pheromones in the absence of their biological fathers.

The impact of environmental estrogens has been something of a dark-horse theory -- until now. The Emory University study gives new force to the idea that these chemicals are the chief culprits in the controversial early puberty trend.

While Marcus stresses that we cannot be sure that other endocrine disruptors will affect girls in the same way as PBBs, she believes that we shouldn't wait until the link is well established before taking precautions. "It would be prudent to reduce our exposures now [to endocrine disruptors] rather than wait until we're sure of the damage," says Marcus, "because the only way to be sure of the damage is when the damage is already done."

PBB is one of many chemicals known as environmental estrogens -- a class so prevalent in the environment that even though some (like DDT) are banned, they still show up in our water and in the fish that we eat. There are thousands of chemicals in use today and many of those haven't been tested for estrogenic properties, but we know that environmental estrogens can be found in sunscreen lotions, plastic baby bottles, hair straighteners and nail polish. They are in the lining of food cans and in the fillings of our teeth. They have even been found in drinking water in Britain -- traceable to the hormones in birth control pills transmitted through urine into the water table and to fish. At this point, all of us have low levels of them coursing through our blood.

Artificial estrogens and estrogenic pesticides are important because they can mimic the effects of the actual estrogen in the body. Puberty begins when estrogen levels are at a peak; the way to stop a girl from reaching puberty is to give her drugs that block estrogen. Theoretically, the way to speed up puberty is to introduce more estrogen.

"I'm afraid for the next generation," says Dr. Gina Solomon, assistant clinical professor of medicine at the University of California at San Francisco and senior scientist at the Natural Resources Defense Council. "Adults are in some way resilient; we can be exposed to fairly high levels of pollutants without as much of a health effect as a fetus would get. What I'm concerned about is the mothers who are being exposed today without knowing it, exposing their fetuses and infants."

In wildlife, environmental estrogens are believed to have produced science-fiction-like results: shriveled testes in alligators, reproduction problems for the bald eagle and complete sex reversal for salmon. In rats as well as other mammals, the right dose of environmental estrogen will, at the very least, trigger significant changes.

"It's not a question of whether it can occur," says Michael K. Skinner, director of Washington State University's Center for Reproductive Biology. "We know that it can occur. The question is whether there's a sufficient amount of those endocrine disruptors in the environment to do the same in humans."

The crucial issue is how much of these substances is in the environment and what quantity would have an effect on humans. If 1 milligram of a compound has an effect in the lab, what will 1 milligram do in the wild? Is one-thousandth of a miligram likely to have an impact? How much is enough to cause premature puberty in girls?

Environmental estrogens in Washington state's Columbia River were found to have dramatic effects on salmon. James J. Nagler, an assistant professor at the University of Idaho, and his colleagues found that 80 percent of female salmon studied were born as males. These females had an XY chromosome instead of an XX. Skinner says that humans have too many biological checks and balances for exposure to environmental estrogens to have so dramatic an effect. But if fish are sensitive to this type of compound, it will most likely have some effect on a mammalian species.

One important obstacle to understanding how environmental estrogens affect humans and how much of the compound will trigger early puberty is an ethical one. Scientists cannot expose healthy children to strong and potentially dangerous compounds. Instead they have to study industrial accidents like the one in Michigan or focus on animal populations, waiting impatiently to see what kind of deformities the chemical tide washes ashore.

The existing evidence about the effect of environmental estrogens already has provoked a call for controls. Since chemicals often travel thousands of miles on transpacific air currents from Asia to the United States, many environmentalists believe the only way to control them here is to invoke international bans.

In December, representatives from 122 countries met in South Africa and signed the Global POPs Elimination Treaty (POPs stands for "persistent organic pollutants"). The agreement calls for 12 contaminants to be banned, including dioxin, aldrin, endrin, chlordane, DDT, dieldrin and heptachlor, all of which are environmental estrogens. The treaty must be ratified by at least 50 countries before taking effect. Once that happens, participants can then begin identifying the next batch of chemicals to be eliminated.

"We need to shift the burden of proof," says Peter Myers, coauthor of "Our Stolen Future," a book about how contaminants affect human hormones. "Right now the public-health authorities have to prove that [a contaminant] causes harm to people. But when you have strong animal evidence, that burden should shift -- it should be the responsibility of the people who want to use [the contaminant] in a consumer product."

Even if you start eliminating chemicals one compound at a time, researchers say, there is no guarantee that the threat of environmental estrogens can be diminished. "We can regulate on individual compounds, but it's the combination of compounds that might sneak up and bite us from behind," says Ralph Cooper, Ph.D., chief of the Environmental Protection Agency's endocrinology branch. "My mind is open that we eventually might find something that is capable of influencing reproductive development in humans."

Michele Marcus does not know whether the Michigan women exposed to PBBs are at greater risk of ovarian cancer or other diseases. She is still analyzing that part of the study. But as horrific as the accident was, it could be the red flag scientists have been waiting for, the evidence that at least one environmental estrogen sped up sexual maturity for some girls. That, along with compelling animal evidence, some researchers say, should be enough to justify the use of preventive medicine to stop a potential environmental disaster before it's too late.