The Rev. Jesse Jackson announces he'll leave public life to "reconnect with my family" after a tabloid breaks news of his "love child." Conservatives sharpen their knives. 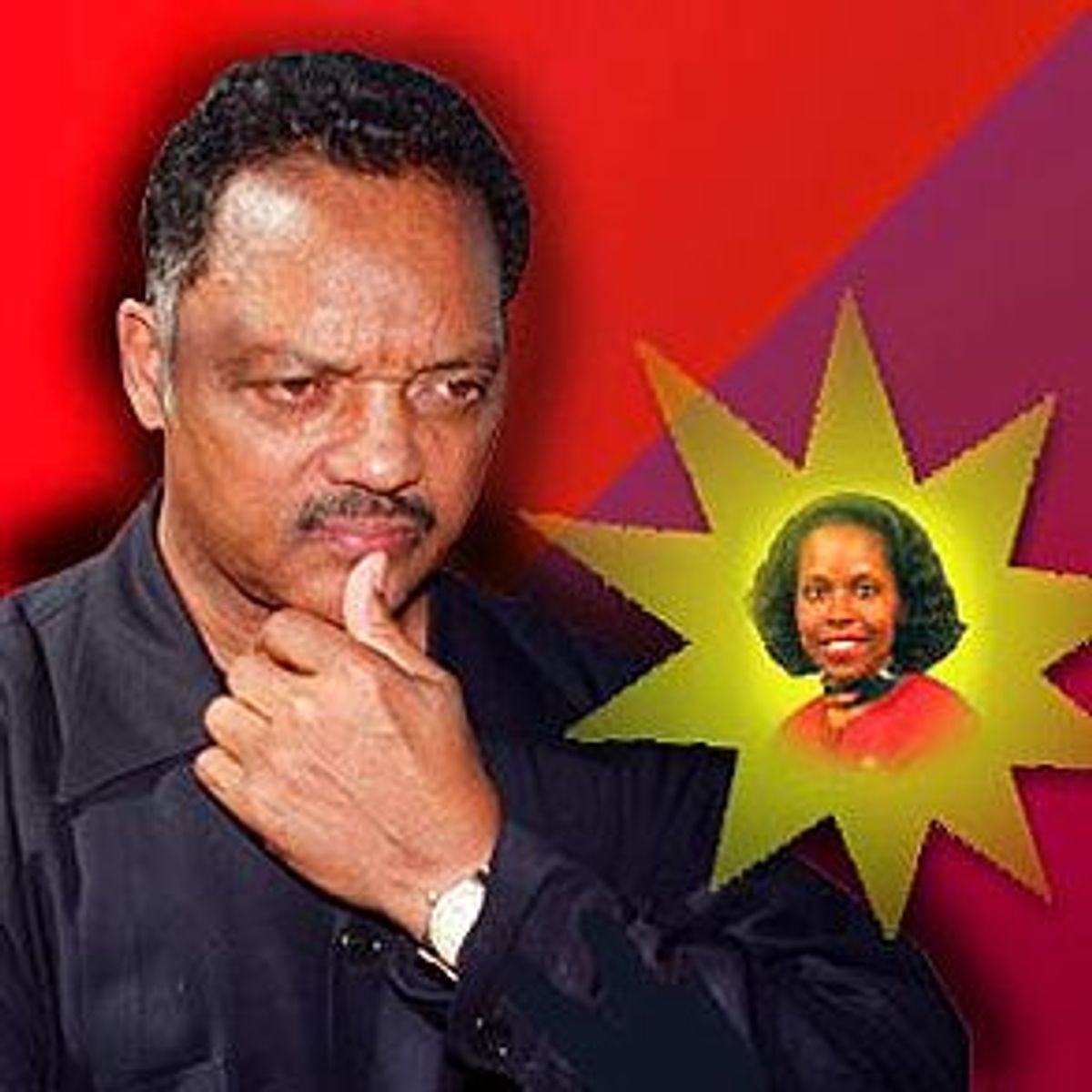 It seemed the fitting end to the Clinton years. On the day that Ricky Martin gyrated to the delight of screaming George W. Bush supporters at the Lincoln Memorial and President Clinton bid a final farewell to the nation, there was one final sex scandal -- from a Clinton moral and spiritual advisor no less -- as if to underscore Republicans' contention that the outgoing administration was amoral at its core.

To complete the sense of a Monica-era flashback, the other side spread whispers of surreptitious timing of the story's release, evoking the specter of the vast, right-wing conspiracy they believe has been plotting to sink Team Clinton from Day 1.

The news that the Rev. Jesse Jackson fathered a child out of wedlock with an aide, Karin Stanford, and used money from his nonprofit Rainbow/PUSH Coalition to pay the woman $40,000 in "moving expenses," broke in the National Enquirer and reintroduced the nation to the politics of sex. Jackson responded by issuing a statement saying, in part, "I fully accept responsibility and I am truly sorry for my actions." He also said that he would step away from public life "to revive my spirit and reconnect with my family."

Now Jackson's name will be added to an ever-growing collection of leaders -- Gary Hart, Bill Clinton, Newt Gingrich and Bob Livingston among them -- whose political legacies are permanently entwined with personal transgressions. And, as in those cases, political enemies were quick to exploit the controversy and head for the moral high ground.

"If a Republican political leader had been guilty of fathering and secretly supporting an illegitimate child, as has now been revealed about Reverend Jackson, you can bet that shady investigators hired by Larry Flynt and James Carville would have outed him a long time ago," said the Rev. Jerry Falwell in a statement Thursday. "One need look no further than the pass Bill Clinton received from feminists and the media amid charges of groping reluctant women in the White House -- and even raping women prior to his presidency -- to see that liberals receive forgiveness while conservatives are condemned for lesser offenses." (And, typically, the opposing side is quick to exaggerate: There were no reports that Clinton groped "reluctant women" in the White House; Kathleen Willey was the sole woman who made such a charge. Similarly, Juanita Broaddrick was the only woman who has claimed to have been raped by Clinton.)

The timing of the story -- during the week of the confirmation hearings of John Ashcroft and just days before Jackson was set to lead protests at George W. Bush's inauguration -- had some Democrats crying foul.

"My immediate reaction is, this is a dirty trick. I don't mean the fact that he had an illegitimate child but the fact that it was released at this moment," says Todd Gitlin, professor of culture, journalism and sociology at New York University (and frequent contributor to Salon). "I think the timing stinks to high heaven. In this case I'm very curious to know how a disreputable sheet like the Enquirer suddenly becomes a window through which news crawls in the room, at this moment in particular."

Robert Borosage, co-director of Campaign for America's Future and advisor to Jackson's two presdiential campaigns, would not comment on whether the Inquirer story was generated by Jackson's political opponents. But, he said, "There's no question that conservative side of the media has been looking for a way to get at Jackson ever since he became so visible in Florida. They are quite happy to use any mechanism necessary."

But the Enquirer story's editor, Barry Levine, the tabloid's assistant executive editor, calls any charges that the story was politically motivated "completely ridiculous." He claims the story came to the Enquirer "through our sources about seven weeks ago. As a matter of fact, it's surprising that the mainstream press has not gotten wind of this story. It seems to have been kicking around Washington for a while. But in terms of the timing, there's nothing to be read into it. Like any other news organization, when we're comfortable that we're ready to go with a story, we go with it. We stay away from the spin."

"We're in the business of disclosure of celebrity and newsmaker secrets," Levine says. "People are going to say what they want. They'll argue about this until the sun comes up about political motivations. I've never been asked to sway anything beyond what the facts are. We stay away from that debate. We just want to get the elements correct. Whether it's Calista Flockhart adopting a child, or whatever, we're just unearthing the story," he says.

While Levine would not reveal where the story came from, he did suggest that at the very least, it was eagerly confirmed by members of Jackson's own organization, who knew about the child and were incensed that Rainbow/PUSH was picking up the tab for $40,000 in "moving expenses" for Stanford.

"There have been some Rainbow insiders who've said it's outrageous and there should be some investigation," he says.

But the Drudge Report -- which first broke the news of Monica Lewinsky -- began dropping hints about the story Monday, and the conservative New York Post ran its own exposé on the Jackson affair Thursday. How did the conservative press all get the goods on Jackson this week before everyone else?

Levine says that keeping secrets in the tabloid business is nearly impossible. "We put out a weekly and we have deadlines where we have to lock up stories by Monday, and our issues don't hit the stands until Friday," he said. "That's an eternity in this era of the instantaneous news cycle. Any time you begin printing 4 million copies of something with a cover that says 'Jesse Jackson's love child,' others in the tabloid community are going to begin hearing about this. We shook a lot of trees in the course of reporting this story. You can't do a story like this without rattling some cages, and that's going to tip some people off."

While some Democrats may question the timing of the Jackson story, most of Jackson's usual allies have refrained from commenting publicly on Jackson's behalf. The NAACP referred all press calls to Rainbow/PUSH, which did not return numerous calls seeking comment. The National Organization of Women, which has been a supporter of Jackson and joined forces with Jackson to try and defeat the Ashcroft nomination, and is participating the in the protests during the Inauguration, also refused to comment.

Many of Jackson's traditional critics were reluctant to comment on the news. "My differences with Mr. Jackson have always been matters of policy, and they are profound. But this is not a matter of policy with me," said Ward Connerly, who has tangled with Jackson over the issue of affirmative action. "I'll let others judge the morality of it. I don't believe you kick a person when he's down. This has to be a devastating thing to his family and a lot of other people who follow his guidance, but I don't want to pile on at this moment of personal anguish."

Others, like conservative columnist Andrew Sullivan, also wouldn't ... at least not quite. "I'm not going to get up on a high horse about Jesse Jackson's personal woes," Sullivan writes on his Web site. "But I can't help wondering just how long it will take before he or a supporter describes the National Enquirer as the modern equivalent of Bull Connor, and the exposé as racially motivated. A day, maybe? A news cycle?"

And the usual voices of pugnacious online conservatism were similarly silent. Neither the National Review Online nor the Wall Street Journal's OpinionJournal.com had weighed in on the Jackson scandal by Thursday evening.

Other conservatives, however, weren't so reticent. "When you have a public figure whose only portfolio is an appeal to moral conscience, that figure better be careful that his moral backyard is tended to," says Robert George, a National Review columnist and conservative editorial page writer for the New York Post.

And conservative lawyer Ann Coulter, whose star skyrocketed thanks to Clinton's Monica problem, had no problem jumping into the fray. Criticizing Democrats likely to try and pooh-pooh the Jackson scandal, Coulter, a columnist for Human Events, says, "No one thought it was irrelevant or a political hit when Jimmy Swaggart and Jim Bakker were caught with their pants down. Oh no. Then the media was full of self-righteous indignation about the rank hypocrisy of such men -- amid the snorts of laughter. Not only that, but the bad acts of those men were taken as evidence of the stupidity and hypocrisy of their flocks.

"If one's public life consists of holding oneself out as a moral authority, then one's private life does have a great deal of bearing on the matter," Coulter says. "That's true if you are Jim Bakker or Jesse Jackson." Fiona Morgan contributed to this report.