From the Internet springs life eternal

Online dinosaurs never go extinct -- instead, they thrive, jostling with their descendants for our attention. 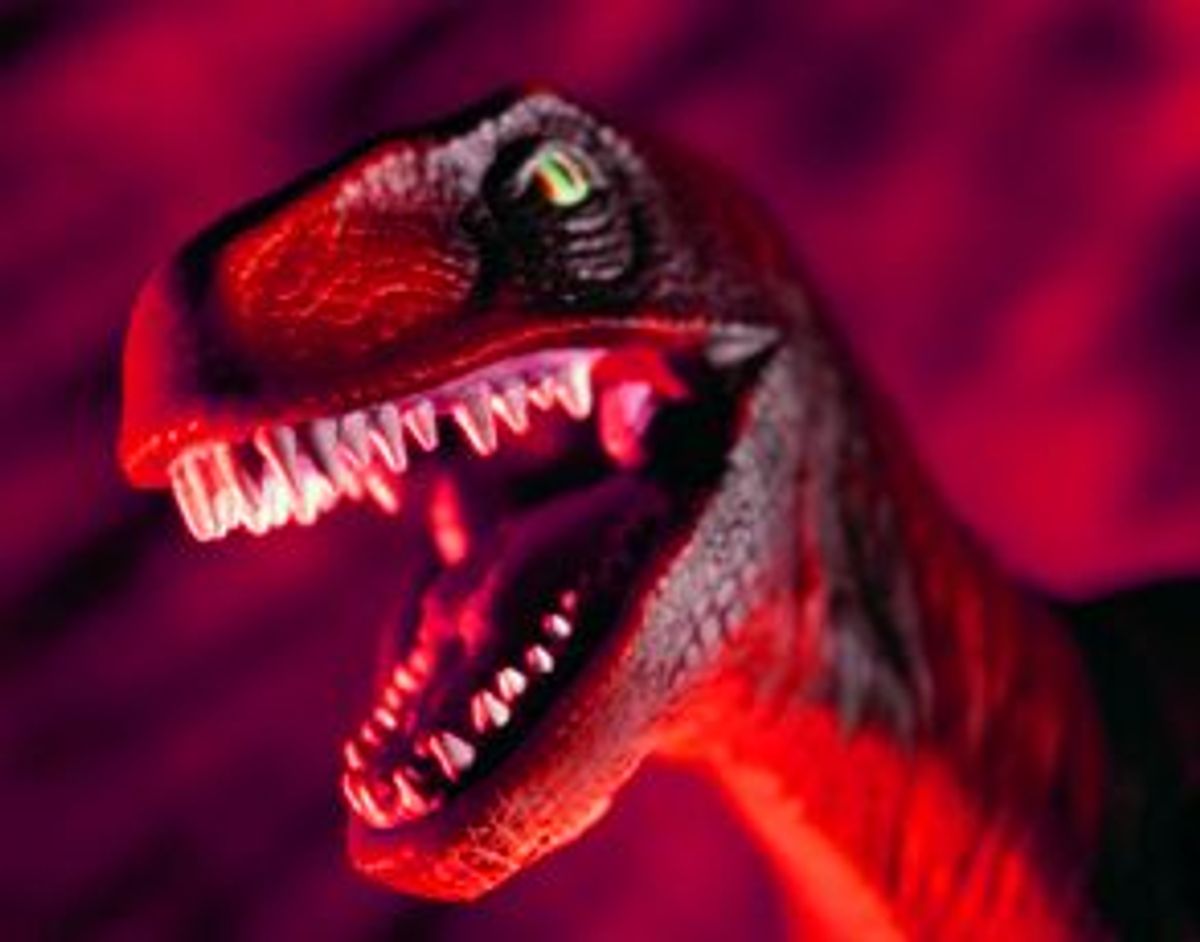 You sit down at your computer, preparing to feed your addiction. You log onto the system, enter your name and password and begin. Your dull life as Joe Student is left behind; you are now Throg, Mighty Dwarf Warrior and you're determined to make 12th level before you log out -- provided that luck and caffeine hold out. You're tempted to use some tricks you know, some holes in the game system, to do it easily, but you resist temptation and play the hard way. Your one fear is running into some player-killing asshole who will try to take you down, probably using some system exploit. (They always cheat, of course -- how else do they win so often?)

Quick question: What year is this? 1980 or 2000? If I told you that you were feverishly typing commands away at a Telnet prompt, would that be a dead giveaway?

While you might not know it from the gaming magazines, old-style Telnet MUD (the role-player games known as "multi-user dungeons"; see also MUSH, MUX, MOO etc., ad infinitum) is alive and well semi-underground, still hacking and slashing (and occasionally sexing) after all these years. Discovering this can be like kicking at the mud by the seashore and having a trilobite wriggle out: We've all seen the fossils. Aren't these things extinct?

Given that a "classic" game today is one that came out last year, and a relic of times past is one that is two years old, the longevity of some of these worlds is staggering -- DragonMud has been active since 1989, an eon in computer years. To put this into perspective, consider that the game had been running for four years when the World Wide Web came into existence in 1993; 317 characters created in that year are still active.

A player experienced in modern MMORPGs (massively multiplayer online role-playing games, which are really just graphic versions of the old MUDs) might be confused, at first, by the lack of visuals and the fact that playing text-only MUDs requires the ability to read and write, but not a credit card. But pretty soon, the newbie would find almost exactly the same gaming structures both within the game (the skill levels, monsters and other characters) and in the surrounding game culture of player alliances, politics, "gods" and "wizards" (experienced players with greater privileges in the game world).

Abbreviations and slang cross the boundaries of time and code. Players in Everquest, for example, refer to monsters by the ancient term "mobs," derived from "mobiles," the name for objects in multiuser games that are, well, mobile -- moving from room to room, pursuing players. Likewise, the tradition of player killing (in which players attack other players' characters, rather than computer-controlled game entities) continues to thrive, as does the controversy around it.

The Internet is occasionally seen as a stratified system, layered like the face of a cliff. According to this analogy, new technologies bury the older methods, rendering them obsolete, relevant only to those Net archaeologists who dig beneath the surface. It's a useful analogy, but incorrect. A far better model for the accretion of new online subcultures and technologies is the human brain itself.

Like the surface of the Earth, the human mind is built in layers, new on top of old. But while the strata laid in the Cambrian do not continue to writhe and breed, and there are no dinosaurs still crawling around in Cretaceous rock, the oldest parts of the mind are not only alive but active, shaping the behavior of the upper layers in weird and wondrous ways. Some theorists who study the evolution of the human brain believe that in order to understand the human drive to build atomic bombs, to philosophize and make art, we must consider the role of the hindbrain, the primitive mind that, the theory goes, understands only territory, mating and power.

Similarly, to understand why Everquest and Ultima Online and the rest are the way they are, we must look back to the earliest MUDs and see how they bred cultures and conflicts that still exist today. It's a principle that applies to other aspects of Internet culture as well: The look of online art, the ways Internet users communicate with each other and the language in which they do it all have roots in the oldest Net cultures. But what's truly amazing is that those oldest, primordial Net cultures still exist. The history of the Net is alive and well.

Technology shapes society, but society is more lasting than technology. One proof of this (along with the possibility that our most recent election was determined by the bane of punch-card programmers -- chad!) is the continuance in the 21st century of an art form born in the earliest days of computing -- prior even to the Internet's predecessor, the ARPANet. Back before graphics accelerators, before Super-VGA, before CGA, before Apple II Hires, before VT-100, there was ASCII art. And there still is.

ASCII is the decades-old standard for encoding text; the simplest text files on your hard drive are stored in ASCII. ASCII art is made with textual characters - letters, numbers and punctuation. It evolved when there were no graphics terminals, only textual ones -- or even no terminals at all, just Teletypes, where input and output were both recorded on a single scrolling sheet of paper.

While even young children can create multimedia extravaganzas with a mouse click, there are still some Net users who laboriously assemble graphics of astounding complexity from the building blocks of words, not images. Granted, there are now tools to assist in the process, like Fabs or TheDraw Screen Editor, but the output is something that could have sprung from a line printer three or more decades ago.

If the human hindbrain uses the forebrain as a means to its ends, so, too, has the primal art culture of the Net adopted new technologies. Animation -- impossible in line-printer days -- has been brought to ASCII art via such technologies as dynamic HTML and Java, culminating in the sadly unfinished but still impressive rendering of Star Wars as pure ASCII.

Another ASCII legacy is so prevalent that most of us hardly notice it.

Modern alphabets began as representational images and slowly evolved into abstract symbols. Thanks to ASCII art, the process is now reversing, as abstract symbols of modern writing reassemble themselves in a pictograph so ubiquitous that it is practically a symbol of the Internet age itself -- the smiley :). A direct product of one of the oldest cultures of the Internet has been adopted as a symbol of modernity. Every time your AOL-using grandmother overloads her latest missive to you with smileys, she is feeling the pulse of the Internet's hindbrain.

But for cultures to form and flourish, there must be places to communicate. E-mail is obviously the oldest means of Net communication, but it suffers from the fact that the sender needs to know whom to mail in order to participate in a discussion. It's also a poor medium for dynamic many-to-many communications. The antidote to both of these problems is one of the oldest still-surviving Net cultures: Usenet.

Usenet is something that portal sites, Net magazines and the like prefer to gloss over or ignore, because it's impossible to make money from it. (Deja.com tried, and failed.) It's the spiritual ancestor of every Web board, one of the first major "media" of the Internet. It long predates the Web. With discussions on every conceivable -- and a few almost inconceivable, like alt.sex.fetish.jello -- topic, Usenet has no owner, no controlling authority, no central control point. No one can file a lawsuit against Usenet, or send in the cops to grab the server. It is far more robust than the Web and has weathered the last decade's huge boom in Internet use with poor grace but surprising resilience.

Conceptually, we also have Usenet to thank for distributed systems, which rely on a network of machines, rather than a central one. The main vulnerability of the modern Internet is the extremely unsafe linking of data to a specific machine; the Usenet model of replicating every message to every machine is a much wiser approach. You can shut down Napster, but not Gnutella; you can eliminate a Web page, but not a newsgroup.

Beneath every modern Net culture lurks a surviving low-tech counterpart, and the fact that they are still living means that Net anthropologists can visit them as they are, not merely pore over badly decayed ASCII files rescued from some crumbling reel-to-reel tape found when the site of an ancient computer lab was excavated to lay the foundations of yetanother.com.

This has implications far beyond the Net itself. The use of the term "culture" when referring to MUDs or Usenet is not an exaggeration; for many people, these societies are the only societies that matter. As more and more people move online, so-called virtual cultures may become, for many people, the dominant social form. If old cultures never die, then Net society -- and, by inference, human society of the fairly near future -- becomes unstuck in social time.

Online, the ancient, the modern and the neo-post-ultra-modern all coexist, and each new entrant to the society of societies (if the Internet is a "network of networks," then Internet culture must be a society of societies) can choose one, some or all of the pasts and futures to claim as their own -- or simply create a new entry in the social databases.

The Internet turns the layered cliffs of history into a sprawling plain, and allows us to freely chart our own way across it.