The most dangerous game 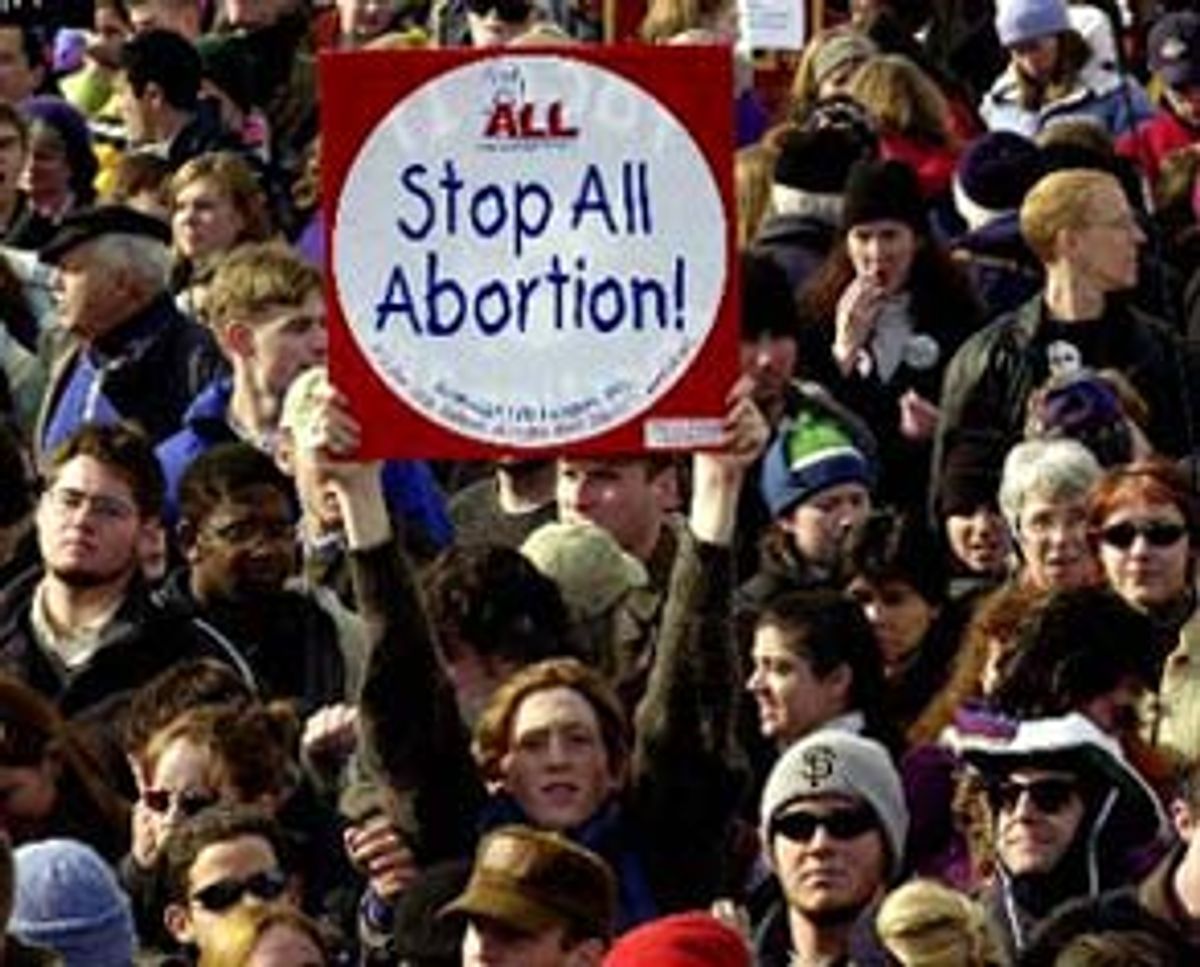 For abortion foes, winning the White House has already begun to earn dividends, as President George W. Bush signed an executive order Monday to end American funding for international family planning organizations that offer abortions or abortion counseling. But while Bush's move was met warmly by some anti-abortion activists, the staunchest remain unconvinced of the new president's anti-abortion bona fides.

"I would love to say that I was thrilled, but I'm not," said Judie Brown, leader of the American Life League. "It's one-half of one-tenth of a baby step."

Brown, a self-described "pro-life fanatic," represents a faction of the anti-abortion community that has strongly questioned Bush's commitment to ending abortion; in a May 2000 letter to him and Al Gore she said that both of them "sanction the killing of innocent babies in the womb."

She says that what the president did on Monday just proves that he won't be strong enough to fight for the ultimate reversal of Roe vs. Wade.

She points to the opening days of the Clinton administration, when the new president issued five executive orders that advanced abortion rights: lifting a ban on abortions performed at military hospitals; pressing the Food and Drug Administration to speed up testing of RU-486; loosening the congressional ban on federal funding of fetal stem cell research; striking down the national "gag rule" that forbade federally funded family planning organizations from discussing abortion; and reversing the Mexico City rule or "global gag rule" that imposed that same national gag rule on international groups.

"If Bush were as strong in his pro-life beliefs as Clinton was in his pro-abortion convictions," Brown said, "he would have reversed them all."

Bush's executive order reinstates the Mexico City rule that was put into place in 1984 during a United Nations population control conference in Mexico City, when Reagan administration officials decreed that the United States would no longer fund international family planning organizations that provided abortions or information about abortion.

While the most strident pro-lifers said the new president did not go far enough, the National Right to Life Committee hailed the move as the first step toward reversing the pro-choice moves of the Clinton presidency. "Of course, we're very pleased with this," said David Osteen, executive director of the NRLC. "This will save the lives of many unborn children all over the world."

To the pro-abortion rights organizations that had grown used to having a friend in the White House, the decision was a rude awakening. "We weren't surprised, but we were certainly hoping that he would not take this action," said Gloria Feldt, president of Planned Parenthood.

"It's a terrible, terrible decision for anyone who thought that Bush's presidency would not be a threat to a woman's right to choose," said Elizabeth Cavendish, legal director of the National Abortion and Reproductive Rights Action League.

Cavendish said that while she expects more attacks on the Roe decision from the Bush White House, the reinstatement of the global gag rule is an easy way to appease Bush's pro-life allies with the minimum of political risk. "It plays well with his hard right constituents, and it only affects women overseas," she said.

But Stacey Vogel, an anti-abortion crusader who traveled to Washington from Buffalo to participate in Monday's March for Life, was among those who remain unconvinced. She cited Bush's appointment of high-profile pro-choice Republicans to his Cabinet as proof that he probably doesn't have the moral muscle to lead the country into a future in which abortion is outlawed. "He wouldn't have hired Christine Todd Whitman or Colin Powell if he were really pro-life," she said.

As for John Ashcroft, the anti-abortion conservative Bush picked for attorney general, Vogel is hopeful about his possible reign at the Justice Department, but wasn't entirely convinced that he has the right attitude going in. "He's a good lawyer and a good prosecutor," Vogel said, "but he'll have to fight to get them to overturn Roe vs. Wade, and I don't know that he'll do that."

Brown instead looks to an even more trusted member of his team for the real story on his abortion views. "Laura Bush is following in her mother-in-law's footsteps," said Brown, noting that both Bush spouses support keeping Roe vs. Wade the law of the land. "It's proof that this administration plans to stay in the mushy middle on life."