I take it back

After threatening to expatriate themselves if Bush won the election, most would-be celebrity defectors put the back pedal to the metal. 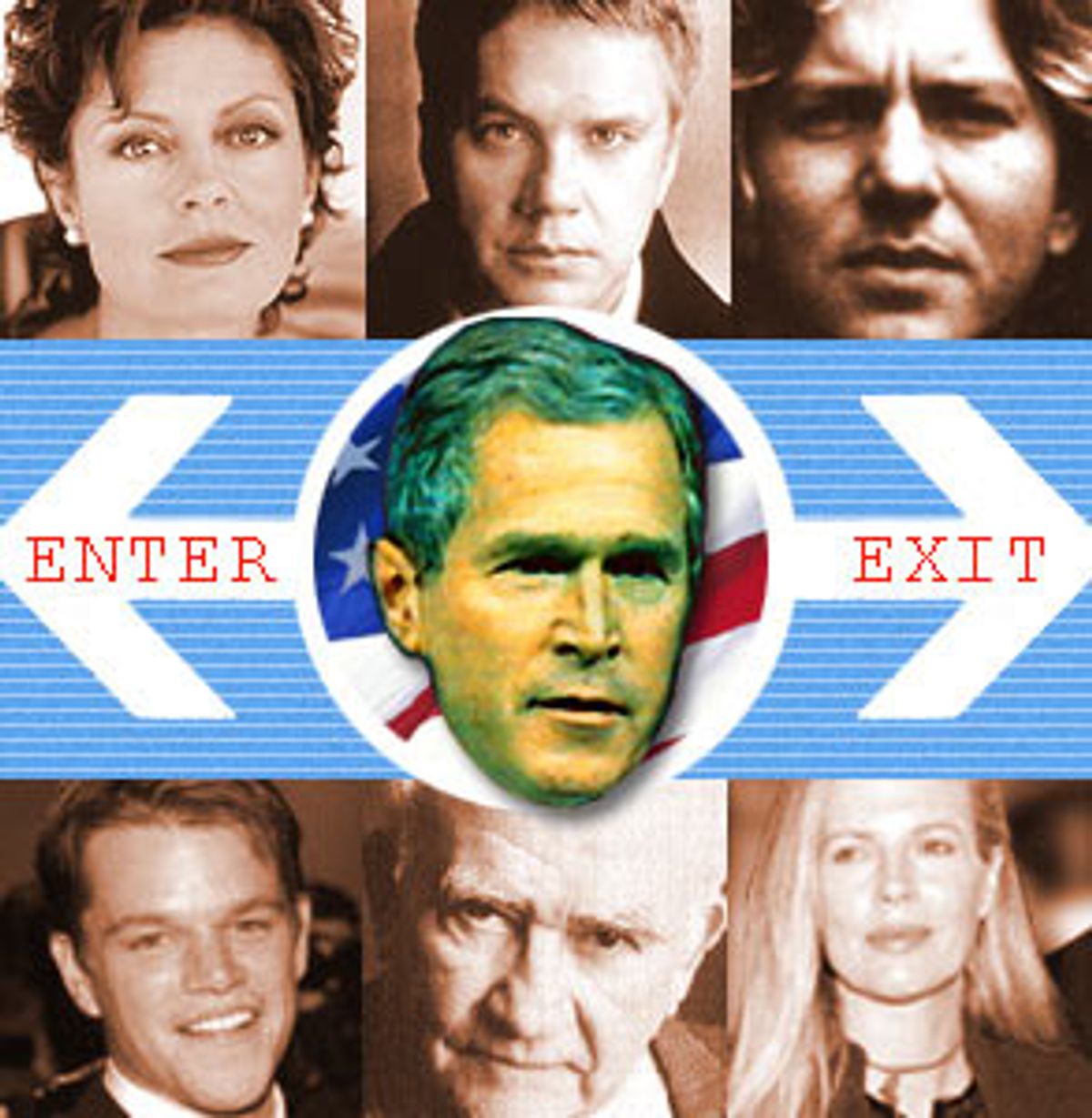 Confirming once again that no statement has been set in stone since the early days of parchment, it's been a big year for retractions, reversals and capricious changes of heart. Former President Clinton admitted last week to giving false testimony under oath; the Rev. Jesse Jackson reversed his decision to withdraw from public life with record alacrity; and reports of the mass celebrity migration that seemed imminent when several celebrities announced their intention to expatriate themselves should Bush be elected president turned out to have been greatly exaggerated.

The fun began on Aug. 31, when Eddie Vedder told USA Today, "I'm moving to a different country if little Damien II gets elected." This statement was followed by director Robert Altman's announcement on Sept. 6: "If George Bush is elected president, I'm leaving for France." Then, on Sept. 18, the New York Daily News ran an interview from German magazine Focus in which Kim Basinger announced that her husband, Alec Baldwin, "might leave the country if Bush is elected president," adding, "and then I'd probably have to go too." (She has since filed for divorce.)

It could have been an extraordinary television event. ("The heartwarming epic dramatization of the fall of Hollywood to the right-wing has-been phalanx!") Cue clip: In the desperate moments before the final plane leaves Los Angeles International Airport for Charles de Gaulle, throngs of damp, tastefully soiled and tousled personalities fight their way through a thick sea of humanity, tossing babies overhead like tiny sacks of grain, crying "Over there! I think I see a Baldwin! Pass ... the Baldwin ... the child!"

But scare tactics can backfire. On Sept. 19, the Daily News ran the following Baldwin retraction: "I never said I'd leave the country, and my wife never heard of Focus magazine and never talked to them."

Then, on Sept. 20, the Daily News ran the following retraction of the retraction. "Kim did indeed speak to a Focus magazine," he told the paper. "But my wife and I never said unequivocally that we would leave the country if Bush won. Never."

Two days later, on Sept. 22, Altman also retracted his statement, again in the Daily News: "Here's what I really said. I said that if Bush gets elected, I'll move to Paris, Texas, because the state will be better off if he's out of it."

For a while it seemed as though the trend might be reversing itself entirely -- until, on Nov. 3, the Washington Post quoted Kennedy White House press secretary and former ABC News correspondent Pierre Salinger as saying, "I don't want any more Bush presidents. If Bush wins, I'm going to leave the country and spend the rest of my life in France."

By December, the intention to decamp for parts un-Bushed had been ascribed to no fewer than a dozen actors, directors, rock musicians and other recognizable persons, among them Martin Sheen, Rosie O'Donnell, Matt Damon, Whoopi Goldberg, Ed Asner, Tim Robbins and Susan Sarandon.

So where are they now? (Or, as our friends in France surely must be asking themselves, "Alors, où est tout le monde maintenant?")

Most of the reports were unsubstantiated. Barbra Streisand, it turns out, had promised to leave the country if George Bush the elder was elected to a second term in 1992, but more recently announced her decision to leave the White House, not the country, for at least four years.

So far, only one threat has resulted in actual relocation. On Dec. 22 the Washington Post's Lloyd Grove caught up with Salinger in the French town of Le Thor ("The Thor"), where Salinger's wife runs a bed and breakfast.

"I'm going to come back to Washington in January to dispose of my apartment in Georgetown," Salinger told Grove, "but otherwise I'll come back here to live for the rest of my life." When asked about Baldwin and Altman, Salinger replied: "I don't know them very well, but if they come here they'll be very welcome. And if you want to come here, it would be very wonderful for us to be together and talk about things."

Whether the invitation reached them is not known, but on Dec. 29, the New York Post's Neal Travis ran the following item:

"One artist keeping his promise to leave the country in the event of a Bush presidency is director Robert Altman. Bob and Kathyrn were in Elaine's the other night with Susan Sarandon and Tim Robbins, and confirmed they've taken a house in London for the coming year. (Altman's next movie will be filmed there.)"

Last week, "Bob" Altman's publicist denied the story, saying the director was not planning a move. Asked if it would be possible to obtain a statement from Altman, the publicist said, "I can't reach him, he's out of the country."

Sarandon and Robbins, a publicist for the couple said last week, aren't going anywhere. "They have a lot of projects lined up here for next year."

No one was injured.

Meanwhile, Vedder's publicist declined to respond to inquiries about whether Vedder is still planning a move, or indeed if little Damien II has in fact been elected.