Did "America's pediatrician" sell out?

Attachment parenting guru Dr. William Sears is found to have ties to the infant-formula industry. 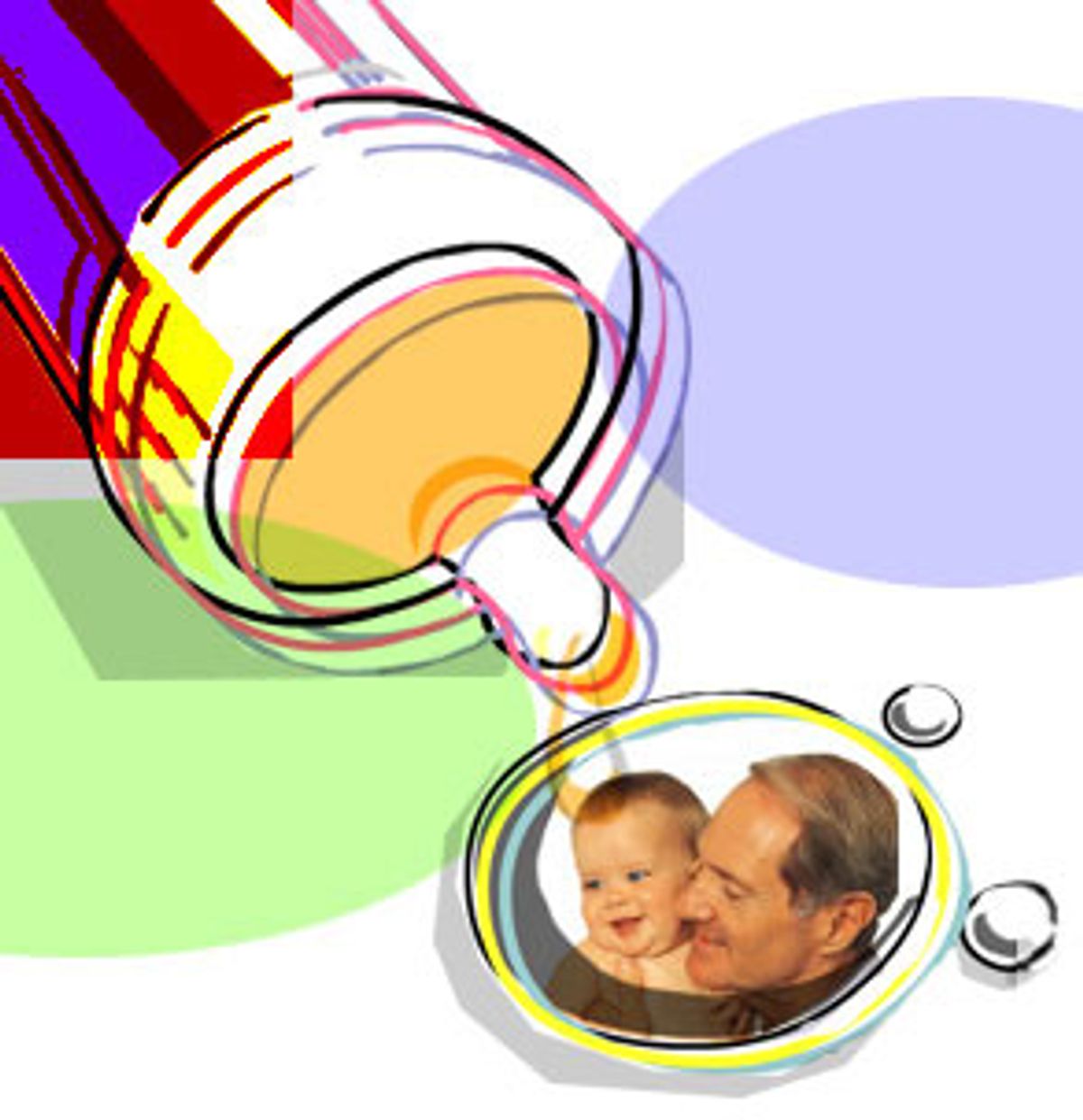 Over the last five or six years, the concept of attachment parenting has come in from the radical periphery of American parenting philosophy to dwell in the mainstream. The family bed, once the exception, is closer than ever to a rule; the baby-wearing parent is ubiquitous. Much has been written about the move to attachment, and much credit for its high profile and wide acceptance must be assigned to one man: Dr. William Sears.

Author of the bestselling baby care bible "The Baby Book" as well as a half-dozen other top-selling pregnancy and childcare manuals, Sears is known as the attachment parenting guru, a California pediatrician who appears most likely to succeed Dr. Spock as the parental go-to guy.

At least Sears appeared to be heading for anointment -- even giving himself the title "America's pediatrician" on his recently launched, full-service parenting Web site -- until recently. These days Sears is under attack by some of his previously worshipful fans, as well as members of the international lactation science and pediatric communities.

Why? It turns out that Sears, known for his advocacy of what he calls the "Baby Bs" -- birth-bonding, breast-feeding, bed-sharing, baby-wearing and "belief in the signal value of an infant's cry" -- appears to have previously undisclosed financial ties to the infant-formula industry.

During the 1990s, Sears established himself as the most visible spokesperson for the cause of breast-feeding promotion in the United States. In his books, he strongly supports breast-feeding as the truly optimal choice for parents and babies, and he has made the case countless times through the years in major magazines and on television. (He is the medical advisor to Parenting magazine.)

Sears also has been a vocal critic of the tactics used by infant-formula companies to ingratiate themselves with pediatricians. In "The Breastfeeding Book," as part of a three-page sidebar titled "For Professionals: How You Can Help," Sears wrote: "Beware of formula reps bearing gifts. Be discerning about posters, pamphlets and educational materials from formula companies. Having the name of a formula manufacturer on information you hand your patients about breast-feeding conveys the message that bottle-feeding is the norm, as does having cans of formula around your office."

Because of his outspoken support of mother's milk and his apparent stand against infant-formula marketing, Sears has shared warm and longstanding ties to La Leche League International, a UNICEF-recognized nongovernmental organization that strongly opposes medical collusion with the pharmaceutical companies that sell formula. Sears serves on their prestigious professional advisory board and is a frequent speaker at their regional and international conferences. La Leche League's catalogues and libraries heavily promote what Sears' publisher has recently repackaged as "The Sears Parenting Library."

So loyal fans and followers of Sears (I include myself here. Full disclosure: He wrote the foreword to my book about attachment parenting) were shocked to find that his site featured prominent banner ads promoting infant formula. Perhaps more surprising was the fact that Sears actually hyperlinked directly to the Store Brand Infant Formula site within the body of his advice to bottle-feeding parents, saying, "That's why I tell my bottle-feeding mothers to consider Store Brand Formulas. They are approved by the FDA, recognized by Good Housekeeping, available at most national retailers under the store's own label, and they cost up to 40 percent less than the expensive national brands. The best source of information about store brand baby formulas is www.StoreBrandFormulas.com."

AskDrSears.com, which debuted in November, represents Sears' bid to expand his media presence to the Internet. According to Sears, the site received 41,000 hits on the first day it went live. Sears had hopes that it would become "the premier parenting site on the Web." Instead the site has become the target of an angry letter-writing campaign by pro-breast-feeding parents, medical professionals and "lactivists" all over the world, as well as the subject of considerable ethical controversy.

Advertising directly to consumers by companies that manufacture or sell infant formula is strictly prohibited by the World Health Organization's Code on the Marketing of Breastmilk Substitutes, an international agreement intended to prevent the billion-dollar infant formula industry from making further inroads into declining worldwide breast-feeding rates. Furthermore, the code includes an important clause stating that "no financial or material inducements should be offered by [infant formula] manufacturers or distributors to health workers, or members of their families, nor should these be accepted."

Although infant-formula companies (and most parenting magazines, Web sites and other media) in the U.S. pretty much ignore the code, American medical professionals who support breast-feeding, groups such as La Leche League International and UNICEF, as well as many informed breast-feeding parents, generally take it very seriously. All indications prior to the launch of AskDrSears.com were that the beloved "Dr. Breastfeeding," as Sears is known to attachment fans, felt the same way.

Last week, AskDrSears.com posted an open letter from Sears in which he addressed his critics and explained his decision to allow ads for StoreBrandFormulas.com on the Web site. The letter noted that running a site of that size is very expensive. Since AskDrSears.com was donating banner ads to nonprofit groups such as La Leche League and Attachment Parenting International, Sears rationalized, his acceptance of paying ads from StoreBrandFormulas.com should be understandable.

(According to a representative for La Leche League, the group's ads on AskDrSears.com did not represent a "donation" by Sears, but rather a reciprocal banner ad exchange in which an ad for "The Sears Parenting Library" received placement on the extremely popular La Leche League International site.)

In his open letter, Sears wrote, "Initially, I was leery of allowing formula advertising to be included ... we needed financial support. It's a reality that very few dot-coms are profitable. Consequently, many fail. And, the days of aggressive venture funding are over. To be successful today, dot-coms must generate revenue and cover their expenses. In order to offer free access to our site, we have to accept advertising from all reputable organizations and institutions."

Rather than calming the controversy, Sears' open letter prompted WHO code-watchers all over the Internet to dig a little deeper. It soon became public knowledge, via various parenting and breastfeeding e-mail lists and newsgroups, that AskDrSears.com shared the same small Virginia hosting server as PBM Products, the company that markets Wyeth Nutritionals -- the company that makes store-brand infant formulas.

It also was revealed that Sears, a longtime vocal advocate of adding the controversial supplement DHA to infant formulas in the United States, serves as a paid medical advisor to Martek Biosciences, the company currently lobbying the FDA to require DHA supplementation in all infant formula sold in this country.

Despite his stated positions at AskDrSears.com advising parents on the use of generic infant formulas (when formula is required) and DHA, Sears did not offer any disclosure statement on the site informing readers of his fiduciary ties to PBM or Martek.

In a telephone interview Sunday, Dr. Sears readily admitted that PBM Products/StoreBrandFormulas.com underwrote the cost of designing and launching AskDrSears.com, as well as the cost of a full-page ad promoting the site in this month's BabyTalk magazine. Sears also answered affirmatively when asked if he is a Martek stockholder.

It was apparently an employee of PBM Products who contacted La Leche League's public relations director, Kim Cavaliero, in order to inquire about a banner exchange between LLLI and AskDrSears.com. Cavaliero says that she "obviously" had no idea that she was dealing with a representative of a formula-marketing company rather than an employee of AskDrSears.com.

Cavaliero says that she specifically asked the individual who contacted her whether there would be any infant-formula ads on the site, since LLLI policy prohibits League ads from running on sites with such advertising. The PBM employee assured her that there would not. (La Leche League has since removed all its ads from AskDrSears.com. PBM Products did not return calls or e-mails asking for comment on this matter.)

In the interview, Sears claimed that, despite the fact that PBM Products designed much of his site and paid to advertise on it, he too was unaware that actual banner advertisements for PBM's product line would run on his site until after he began receiving e-mails from what he has described as "mad mommies."

"I made a mistake in allowing the ads for infant formula to appear on my site," said Sears, who has since removed the link to the StoreBrands site. "I accept responsibility for that mistake and I plan to correct it."

According to Sears, he first became acquainted with PBM Products while visiting Wal-Mart headquarters in Arkansas to discuss placing his parenting products, such as books and baby carriers, in Wal-Mart's recently launched "breastfeeding collection." PBM, in cooperation with Wyeth Nutritionals, provides Wal-Mart with its own "Parents' Choice" brand infant formula.

Sears recalls that after meeting representatives of PBM through Wal-Mart, he came up with the idea to partner with the formula company in his already-planned AskDrSears.com Web venture in order to both fund the site and "reach out to bottle-feeding mothers who would not otherwise hear our attachment parenting message."

Sears notes that it is his opinion that his parenting books are merely "preaching to the choir," and that he is extremely eager to find a way to promote the benefits of baby bonding to parents who aren't breast-feeding. He says that he has recently explored a number of ideas to get his message out, including holding discussions with Wyeth Nutritionals about putting brochures promoting attachment parenting (and presumably AskDrSears.com) inside 30 million cans of infant formula. Since coming under fire for his ties to PBM Products, Sears says that he is no longer considering this idea.

According to Sears, he was completely unaware -- and was at the time of this interview still not convinced -- that his relationship with PBM violates the WHO Code, which he says he supports "100 percent." He says that he is in discussions with PBM Products now to recraft the site so that it is in total compliance with the code, even if this means severing his ties to PBM. However, when asked, Sears says that he has no plans to end his relationship with Martek Biosciences or his advocacy for DHA supplementation because he believes in the product so strongly.

Sears reports that the banner ads for infant formula will be removed from AskDrSears.com this week. (They disappeared from the site Tuesday.) He now wants to challenge his core audience to come up with creative ways to connect with bottle-feeding parents who might be interested in attachment parenting.

"Bottle-feeding mothers should be encouraged to practice all the other aspects of attachment parenting, and I want to figure out how to remedy that," said Sears.

However, from the discussions raging all over Internet parenting forums at the moment, it remains to be seen whether Dr. Sears' core audience will stick around to help him figure this one out.

Katie Allison Granju lives in Tennessee with her three children and is the author of "Attachment Parenting." Her website is www.locoparentis.blogspot.com.