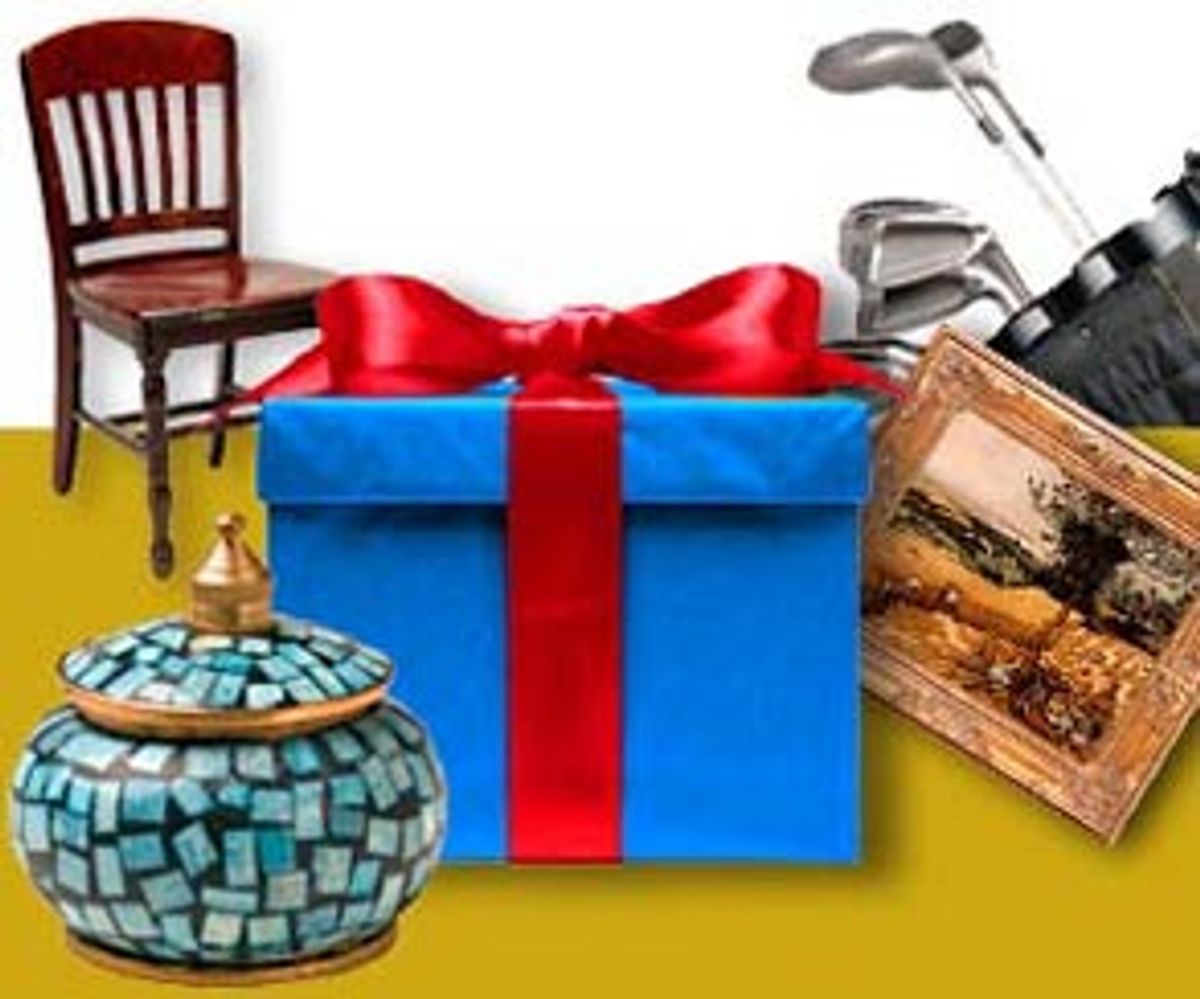 After eight years of warfare between the press and the White House, could the Clintons' stay have ended any other way? In an utterly predictable finale, reporters, busily concocting motivations and connecting fictitious dots, swooped in for one last pointless, and sloppy, appearance-of-impropriety bust.

The capital gang wasn't content to target the controversial last-minute pardons issued by the Clinton just before he turned off the Oval Office lights. No, pundits and reporters were incensed that the president and wife Hillary left the White House with $190,027 worth of personal gifts last year. Many were from deep-pocketed friends helping the Clintons adjust to private life after spending the last two decades living in the Arkansas governor's mansion and the White House.

Now, $190,000 in gifts is surely a lot of goodies by anyone's standards, a bounty bound to raise eyebrows, since during the previous year the Clintons accepted just $23,602 worth of gifts. And if Bill and Hillary were to be tried for being politically tone-deaf, this would make an excellent Exhibit A (as would Hillary's decision to sign an $8 million book deal just weeks after winning her New York Senate race).

But the media's condemnations of the gifts were so swift, so visceral and so personal that they laid bare one last time an unchecked venom many in the political press simply cannot mask. And the truth got trashed along the way.

As with most of these tired rituals of outrage, critics admitted upfront that what the Clintons did was perfectly legal, but stressed it just wasn't right. The Washington Post weighed in with a tsk-tsking editorial: "The Clintons have no capacity for embarrassment. Words like shabby and tawdry come to mind. They don't begin to do it justice." New York Daily News columnist Michael Kramer practically popped a vein writing about the Clintons' parting gifts. Furious that "they stripped the White House," Kramer implied the "white trash" couple were "world class users" who lacked "a moral compass." The columnist insisted, "Most First Families view the gifts they get as the nation's property -- and leave town without them."

Actually, had Kramer done a hint of homework he would have discovered that during their four years in the White House, the previous occupants, President George and Barbara Bush, pocketed $144,000 worth of gifts. Not bad, considering those were recession years. Yet nobody suggests Poppy and Bar lacked a moral compass.

Meanwhile, excitable Fox News commentator Morton Kondracke fumed the "sleazy" Clintons had at worst "extorted," and at best "squeezed," the gifts out of contributors. Equally upset about the gifts, the San Francisco Chronicle editorialized that the Clintons' "graceless finale" had "carried the stench of scandal."

Was it the number -- $190,027 -- that sent so many people into a tizzy? If so, than perhaps this is all Dale Chihuly's fault. The renowned glass artist gave the Clintons one of his pieces worth $22,000. Then, Clinton's Georgetown alumni class of '68 gave the first couple a matching Chihuly basket set valued at $38,000. Those two items alone represent nearly one-third of the Clintons' gift take.

It seems strange that pundits were irked by a dollar figure since the press shrugged its collective shoulders when President Reagan allowed his wealthy friends to buy him and his wife Nancy a 7,192-square-foot house for $2.5 million on 1.25 acres of land in fashionable Bel Air, Calif., back in 1987. Yes, the Reagans eventually paid their friends back, but the sweetheart deal was struck two years before Ron and Nancy left the White House, setting up by today's standards a clear question of impropriety; what did Reagan's well-connected friends really want in exchange for their generosity? Back then, nobody cared. Yet imagine the caterwauling, not to mention the congressional investigations, had the Clintons dared such an exit.

For a textbook example of how mainstream journalists' standards have evaporated when it comes to covering the Clintons, especially when publicly questioning their character, look no further than Andrea Mitchell's lightly sourced and tightly spun gift-giving piece last week on NBC, along with the companion story posted on MSNBC.

Right from the top, the MSNBC headline laid down the spin: "Clinton gifts spur controversy; $190,000 in luxurious gifts are legal, but politically damaging."

Who said they were politically damaging? Mitchell.

Sentence 2: "She ducked questions about what even friends are calling the Clintons' 'loot'." Who were the "friends" labeling the gifts "loot"? Mitchell never says.

How did Mitchell know exactly when the gifts were given, since that information is not included as part of the Clintons' personal disclosure report? It's an allegation made by many, including NPR's Scott Simon. The implication that the gifts arrived soon after Hillary's Nov. 7 election victory, but before she became a senator, is crucial in order to sustain the notion that this was all an effort to skirt Senate ethics laws. The problem is that there is no proof that's true.

In fact, the opposite may be true: Scores of the listed gifts were given to the Clintons before Hillary even entered the New York race. That's because, as clearly spelled out on the Clintons' 2000 Personnel Public Financial Disclosure Report yet completely ignored by the otherwise-fascinated press, the $190,000 worth of gifts included "gifts received over the last eight years" -- from the beginning of Clinton's two terms -- "but which were not accepted by the Clintons until last year."

For instance, according to an alumni spokesperson, the Georgetown class of 1968's $38,000 Chihuly basket was given to the Clintons nearly three years ago, in May of 1998, but was not officially accepted until 2000.

Why? Because first families receive gifts and decide at the end of each year which ones to officially accept and to disclose, and which ones to leave behind or give to the archives. Some decisions are put off to the next year, which is why the list of gifts accepted during a president's final year are usually longest; final decisions on all those accumulated gifts must be made.

Mitchell either didn't know or didn't care, because later she reported, "One of the most generous donors was New York Clinton supporter Denise Rich, who gave $7,300 for two chairs and two coffee tables. At the same time, on December 6th, she sent a personal appeal to the president, pleading for a pardon for her ex-husband, fugitive Marc Rich."

Again, how did Mitchell know Rich gave $7,300 worth of furniture "at the same time" she was lobbying for a pardon in December? She didn't. In fact, Rich's spokesman told the New York Post that Rich gave the gifts to the Clintons 10 months ago.

Mitchell didn't source that information either, but the notion of a Hillary registry was first floated by the New York Times' Maureen Dowd in a sniping Christmas Eve column: "Some of the First Lady's wealthy friends decided it would be nice to treat her like a bride -- building a nest from scratch -- and send her housewarming presents from one of her favorite stores, Borsheim's Fine Jewelry and Gifts."

Within days of Dowd's column, Susan Jacques, CEO of Borsheim's, told the local Omaha, Neb., newspaper that Hillary was not registered with the store and no registry had been set up on her behalf. Clinton's spokesman also denied she had registered for gifts there. So with a public denial already on the record, how did NBC get around that? Easy. It simply flashed a picture of the Borsheim's Web site on the screen during the piece and then referred to it vaguely as "the store." That way NBC never technically reported Clinton had registered at Borsheim's.

The Associated Press, however, took NBC's picture at its word, and reported the story the next day. The AP, though, did contact the store and once again the CEO of Borsheim's denied the story. But it was too late. The "Hillary had a bridal registry" story was too good to pass up, even if it was too good to be true. ABC, CNBC, CNN and Fox News all later reported the Borsheim's story. There was some truth in it: Hillary did shop at Borsheim's last March and friends had an informal wish list of store items from her. But that's a far cry from Mitchell's giddy version that Sen. Clinton was picking out fine china "last November."

Also, had Mitchell bothered to check, she would have learned that the vast majority of gifts the Clintons claimed in 2000 (rugs, sofas, golf clubs, etc.) are not even sold at Borsheim's. Twice in her story Mitchell mentioned how the items were received just before Hillary's Senate gift ban went into effect. Mitchell seemed again to be picking up where Dowd left off late last December: "Attention Hillary shoppers! Only nine more days before that pesky Senate gift ban goes into effect! As a senator, Hillary won't be able to accept gifts worth more than $100."

But that's not true. According to the Lobbying Disclosure Reform Act of 1995, senators may accepts gifts from close friends valued at more than $250 if approved by the Senate Ethics Committee. So, if documentarian Ken Burns had waited until after Hillary was sworn in to give the Clintons a photograph of jazz great Duke Ellington valued at $800, would the Senate Ethics Committee have objected? Or if longtime Clinton friends and supporters Ted Danson and his wife Mary Steenburgen really wanted Bill and Hillary to have $4,787 worth of china (which, according to the record. they did), but had waited until after Hillary became a senator, couldn't they simply have given the gift directly to the former president, making the question of Hillary's Senate gift ban moot?

Mitchell concludes her piece this way: "Still, some of Senator Clinton's own supporters say her buying spree shows terrible political judgment." But wait -- what "buying spree" are these anonymous "supporters" referring to? Mitchell had just chronicled how the Clintons were showered with luxurious gifts, so what's with the reference to the former first lady's "buying spree"? Wasn't the whole point of this manufactured, hand-wringing scandal that Clinton didn't have to "buy" a thing? That phrasing was either amazingly sloppy on Mitchell's part, or another attempt to spin the story into something it was not. The senator's "receiving spree" just doesn't sound very sinister.