A dodgy new book claims that Wallis Simpson was genetically a man and romanced a much younger gay playboy. 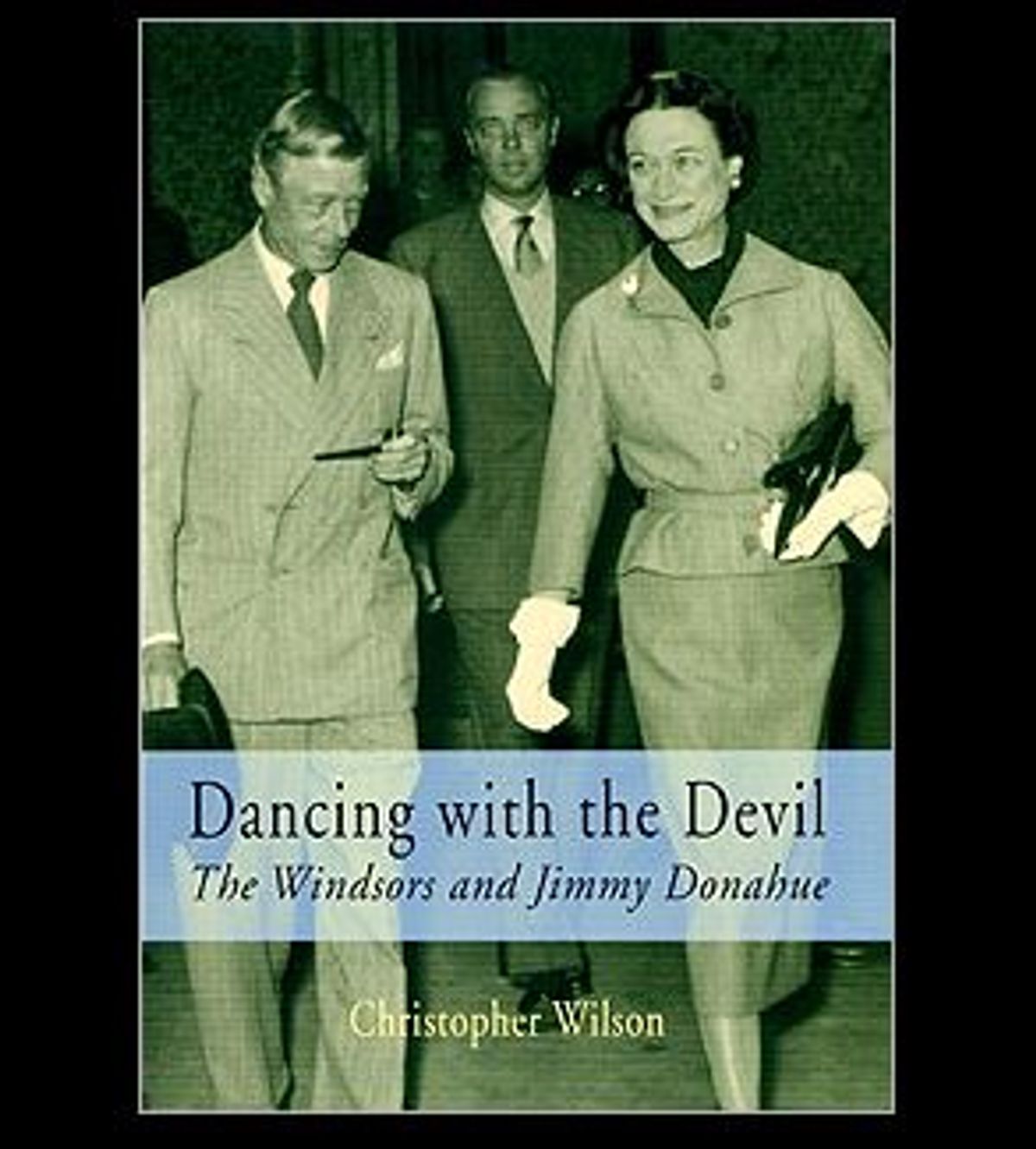 So Wallis Simpson, the Duchess of Windsor, was really a man. How did I reach the age of 47 without knowing that?

Probably because it isn't true. Certainly it's not demonstrated, much less documented, in "Dancing With the Devil," Christopher Wilson's trashy new book about the relationship between the duchess, a former Baltimore socialite, and F.W. Woolworth heir Jimmy Donahue, "a gay playboy twenty years her junior," as Wilson describes him. For four years, Donahue essentially supported the Duke and Duchess of Windsor's extravagant way of life. Wilson thinks that the duchess and Donahue "consummated their love" in 1950 aboard the Queen Mary, to the horror and humiliation of "the buttoned-up and inadequate duke" (a former king of England, Edward VIII, for whose mother the ship was named).

Still with me? The Duke of Windsor was apparently so undone by his wife's infidelity that he wept for days, "crisscrossed" the oceans, contemplated suicide and went right on spending Donahue's money as if nothing had happened. Because, I suspect, nothing had. Wilson is a one-time "Fleet Street columnist" -- say no more! -- whose previous books include a biography of Prince Charles' mistress, Camilla Parker Bowles, and the definitive life of Goldie Hawn. "Dancing With the Devil" shouldn't be critiqued so much as held at a distance with tongs. These quotations from an article Wilson wrote about the book for the Express in London capture his technique in a nutshell:

In the end only the Duchess of Windsor and Jimmy Donahue ... knew the answer. But the passion each felt for the other caused the Duchess, at the age of 55, to consider divorcing the man who rejected throne, crown and empire for "the woman I love." ... In the history of love, there could be no greater betrayal.

Well, I don't know about that. Delilah's betrayal of Samson might count as "greater" than this one, or even Meg Ryan's of Dennis Quaid. Wilson's publicists are busy telling people that the story of Donahue's affair with the duchess "is a skeleton that has been successfully buried for 50 years." Don't you believe it. The duchess's intense friendship with Donahue was one of the great open secrets of '50s cafe society. As to the question of whether they ever actually had sex, Wilson has not answered it.

On the larger and sillier question of how "a homosexual" falls in love with a woman, both sense and dignity forbid a response. As Gore Vidal never tires of saying, there is no such thing as "a" homosexual. "Homosexual" is an adjective, not a noun. And despite the attention his book's been getting -- "I think it does actually rewrite history," Wilson said in an interview, that "the Duke was betrayed by his wife in a most curious and degrading manner" -- there's only one thing you can be sure of after reading "Dancing With the Devil": You can't libel the dead. You can say any damn thing you want about them, and they can't do a thing. Wilson names no crucial sources. He got his Windsor-Donahue poop from "Barbara Hutton's secretary," who heard it from one of the duchess's maids, unnamed: "The evidence is there that sexual exchange took place between the duchess and Jimmy, and the evidence is always from the best source -- which is the maid. If the maid was there immediately afterward, she is able to tell better than anyone else what went on behind closed doors." Right. And, for a fee, she'll let you smell the sheets.

What is it about the Duchess of Windsor that makes everyone hate her so much? I was at her memorial service in Paris, just a week after her death in 1986 at 89. I went out of curiosity, and a strange feeling of obligation. My mother's uncle, Raymond Schindler, knew the Windsors briefly in the Bahamas, when the duke was governor general in Nassau. During World War II, the British government thought it wiser to keep "HRH," as the British Secret Services called Edward, perspiring in the colonies than to let him loose in Europe, where he had been conniving with the Nazis, putting himself and the entire war effort at risk. What with the duchess's health problems and wardrobe requirements, they managed to spend a great deal of their time in Palm Beach, Fla.

Uncle Raymond was a Park Avenue detective, a society dick, the man anyone who was anyone went to in order to get dirt on someone else. For more than 20 years, Uncle Raymond had his own table and conducted business at "21." In July 1943, he was called to the Bahamas by Nancy Oakes, whose then husband, Mauritian Count Alfred de Marigny, had been charged with the murder of her father, Sir Harry Oakes, the Canadian gold tycoon and richest man in the islands, whose burned and bludgeoned body, one stormy night ... where was I? Well, it's a famous case -- you can look it up. NBC did a movie about the Oakes murder some years ago called "Passion and Paradise," and Wayne Rogers, imitating Peter Falk as Columbo, played Uncle Raymond. We all had a big laugh about that.

Anyhow, Raymond always said he knew who killed Sir Harry, and that he could have proved it if the Duke of Windsor hadn't blocked his investigation. The duke's wartime record as a Nazi sympathizer, now open to the skies, confirms his involvement in the Oakes murder coverup. "He was in it up to his neck," Raymond said, referring to the duke and the Oakes murder, and adding that if push came to shove he'd take the duchess over the duke any day of the week. (Raymond did get de Marigny off the hook, too, and not by phony means.)

My mother will undoubtedly tell me that I remember all this badly, but you can imagine it was romantic stuff to hear as "a homosexual" growing up. Thus, when the Duchess of Windsor finally died and I found myself in Paris, I thought I'd drop by to pay my respects. This wasn't the duchess's funeral, note, which took place "privately" -- practically under cover of darkness -- at Windsor Castle, but only an occasion for her friends to pray for her twice-divorced soul, and to hear some reminiscence of her life.

Unfortunately, by the time she died, the Duchess of Windsor didn't have any friends. After the duke's death in 1972, she'd lived a life of nearly total isolation at their mansion in the Bois du Boulogne, suffering from arteriosclerosis and in thrall to her French attorney, Suzanne Blum, who guarded her closely, let few in to see her apart from doctors and clergy, arranged for the disposition of her estate and appointed her own assistant, Michael Bloch, as the duchess's official biographer.

In April 1986 the United States under President Reagan had just attacked Libya. Bombs were going off all over Paris, aimed at American targets, and the duchess's memorial at the American Cathedral on Avenue Georges V was nearly deserted -- whether from fear of terrorism or dislike of the deceased, I couldn't say. It seemed to me that I was the only mourner there, apart from the dean, the British and American ambassadors and their wives, a horde of paparazzi and a row of weeping servants -- among them the duchess's faithful butler, Georges, who was sobbing harder than the rest put together.

Call me a sentimental fool -- call it April in Paris -- but I've never felt so sorry for anyone in my life. I mean the duchess, not the butler. Now, I feel even more sorry for her. Listen to this, from Wilson's Express article:

Some say it was sex -- forbidden, heady sex -- which drew the Duchess to Jimmy ... However, it was not just sex that seduced her -- it was the money ... Because [Jimmy] was homosexual, it was conveniently assumed that the close relationship remained platonic. But new evidence and old memories from friends, acquaintances and family members have finally confirmed the truth: the Duchess did have an affair. And it did nearly wreck the 20th century's most controversial marriage.

Did it? I looked in vain through "Dancing With the Devil" for confirmation that the marriage was ruined, or even changed.

As for Wilson's other blockbuster revelation -- that the duchess was genetically male -- that's also secondhand, taken from Bloch, who heard it from a long-dead gynecologist in London, who heard it from a physician who had treated the duchess, etc. According to this theory, Wallis Simpson had androgen insensitivity syndrome, a hormonal irregularity that causes a genetically male body to develop as a woman, although without fully developed sex organs. "When they reach maturity such women exude certain male characteristics and can have unusually strident personalities," Wilson tells us. "Such people cannot bear children and unless aided by surgery often cannot experience sexual intercourse." There have also been plenty of rumors that the Duke and Duchess of Windsor never had sex. "No man is allowed to touch me below the Mason-Dixon Line," the duchess once said, and from this all proceeds.

For the record, the Duchess of Windsor was buried without an autopsy, and behind gates that will always be closed, so the "Wallis was a man" theory will have to hang fire. Donahue, too, is long dead, killed by Seconals and too much booze. What could he tell us if he were still alive? That he'd "had sex" with the duchess? How many times? "Tch-tch, hmph," as Walter Winchell said.

Fortunately for the duchess, and just as Wilson's ghastly tome appears, we also have Greg King's magisterial "Duchess of Windsor: The Uncommon Life of Wallis Simpson," which appeared last year in England to unusual controversy and was published here last fall. Since the death of Princess Diana, to whom she is always, but wrongly, compared, Mrs. Simpson has been getting a makeover in England, where they look at royalty a bit differently now than they used to. King's spin isn't "pro-Wallis" so much as "anti-Windsor," for which he's been criticized in the old country: The British royal family would rather eat bugs in Trafalgar Square than admit to an error in marital judgment. But the Duchess of Windsor was American, by God, and it's Americans like King who ought to be writing about her. King's book is as large as Wilson's is small, as judicious as Wilson's is rash and as sympathetic a life as we can hope to see of a woman who wasn't, and will never be, judged on her merits.