"In the Mood for Love" 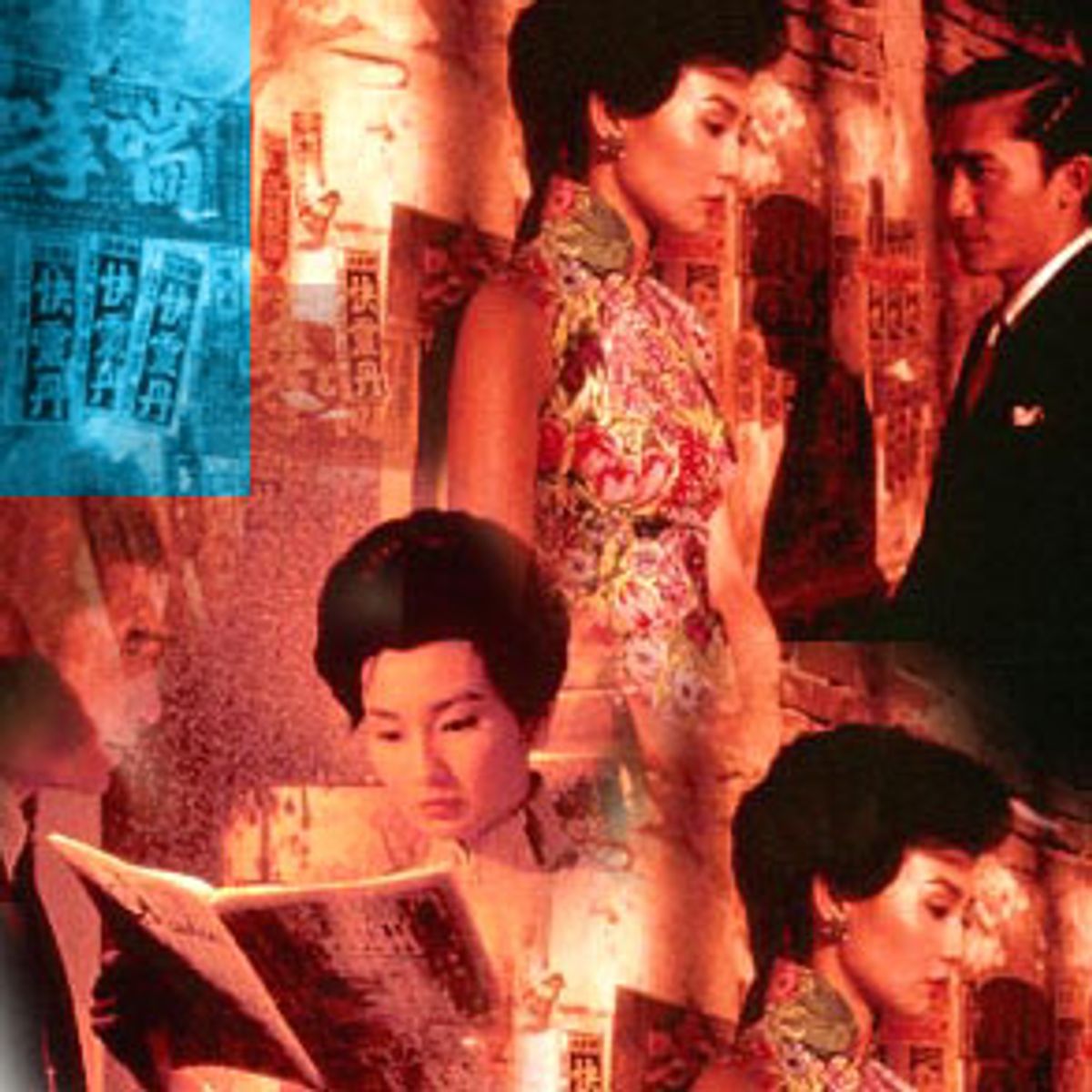 Where does love go when two people who feel a mad attraction to each other never act on it? Hong Kong director Wong Kar-Wai's "In the Mood for Love" is less a movie than a dream meditation on the nature of love that never steps into the light. Plotwise, not much happens. But when the movie's over you feel that it has taken you somewhere, that it has given shape and tone and texture to a love that hasn't even had a chance to breathe in the real world. It's a reassurance that love never simply goes "nowhere," dissipating like perfume in the air. It has its own kind of energy and life, and if you sit quietly enough, you can almost hear it thrumming.

Wong is by no means a linear director; he prefers latticelike structures, nets of visuals and sound that allow us to scoop up bits of information like shimmery fish. As with his gorgeous 1995 "Chungking Express," it's not always possible to figure out exactly what's going on in "In the Mood for Love" -- but then, that's not really necessary. The potent glances that pass between the two lovers, played by Tony Leung and Maggie Cheung, and even just the way the actors move, are enough to carry you.

The setting is Hong Kong in 1962. Su Li-zhen (Cheung), a young wife whose husband is almost perpetually away on business, takes a room in the apartment of Mrs. Suen (Rebecca Pan). That same day Chow Mo-wan (Leung), a journalist whose wife is also away much of the time, moves into a room down the hall. Both find themselves forced into the role of being on-again, off-again solitary people, deprived of the luxury of settling comfortably into the rhythm of life with one other person. They pass on the stairs of the local noodle shop, barely glancing at each other, partly out of propriety and partly out of embarrassment, as if each hopes to scurry away secretly with his or her takeout dinner without wearing the loneliness of it as a symbol.

The two barely speak until Chow realizes that their respective spouses are having an affair. Shocked and hurt, they discuss the situation in an almost businesslike way, despite the fact that miniature galaxies of feeling have already passed between them in their furtive glances. They become cautious friends, and it's clear they're both considering the possibility of falling in love with each other. But when Chow pushes forward ever so slightly, Su retreats, mostly out of a sense of honor. She doesn't feel the two of them should behave as badly as their spouses have. They take breaks from their friendship, but as time goes on, it falls into a gentle if slightly irregular rhythm, a loping ballad in 5/4 where the extra beat is the thing that sets them apart from all the other lovers in the world.

Wong's Hong Kong streets, often slicked with rain, and color-patchwork interiors have a glistening, dreamy look. Almost every frame is buffed to a subtle romantic glow. Credited to two cinematographers -- Mark Li Ping-bin and Wong's frequent collaborator, Christopher Doyle -- "In the Mood for Love" looks period-perfect and yet also exists in a romantic nowheresville beyond any real time or place. Tendrils of cigarette smoke hang in the air between the lovers like specters of possibilities; the corridors of the hotel where they meet -- not to sleep together but to discuss the martial-arts story Chow is working on -- look both lively and lonely, the clashing patterns of curtains, wallpaper and tile floor a mismatched surprise.

Wong directs his actors beautifully, although the gentle two-steps-forward, four-back restraint he summons from them must have made him maddening to work with. (In a New York Times Magazine interview, Cheung said she became so frustrated working with Wong that she swore she'd never do so again -- until she saw how beautifully the movie turned out.)

Leung -- not to be confused with the actor who starred in Jean-Jacques Annaud's "The Lover," Tony Leung Kar-fai -- has a grave, refined presence, but there's a boyishness to his dignity that's almost overtly sexual. Cheung, one of the most staggeringly beautiful actresses working in the movies today, lends soft, understated expressiveness to her character, a woman who's afraid to let her face betray what she really feels. Her body language tells a good half the story of the character. We often see her walking from behind, dressed in her brightly colored, fitted, extremely high-necked cheung sams; her gait has a sensuous, high-heeled amble. The dresses, restrained in fit but not in color or pattern, mark her as a modest, fashionable woman of her time and place, but even so, there's something potentially free and modern about her. She's like a cautious, resting butterfly, wings temporarily folded but ready to fly at any time.

As actors, Leung and Cheung are balmily attuned to each other here. Although their romance never ignites, it throws off pure, soothing warmth. Wong's rhythmic sense as a director is different from that of Ang Lee, whose "Crouching Tiger, Hidden Dragon" also cradles an unfulfilled love story at its center. Wong's picture moves more slowly than Lee's, but there's more energy pulsing through it. The lovers' restraint feels lush and vital, a current between them that's practically a third character. By the time Leung finally takes Cheung's hand -- it happens late in the movie -- it's as if a dam has broken, yet the delicacy of the gesture remains intact. It's not soaked in melodrama.

In one scene, Chow and Su sit in a cafe, discussing their respective spouses' indiscretion even as the bond between them has already shown itself to be filament fine and strong. The lovers are shown to us mostly in profile, which means each actor has only half the usual available resources to work with: one eye and half a smile apiece.

But they telegraph their desire beautifully and perfectly, and the fact that their faces are partially hidden from us enhances the sense of intimacy between them. They're two halves of one exceptional whole, prevented by circumstance from ever coming into the open. But the fact that their love never flowers hardly matters. As they've written it out, it exists fully formed and three-dimensional somewhere in space, like a geometry problem that extends far beyond the paper it's written on -- backward, forward, from left to right and from East to West.