An eye for an eye

Forty-seven years ago, Ariel Sharon led a raid on a West Bank village that killed about 70 men, women and children, most of them civilians. The villagers have not forgotten. 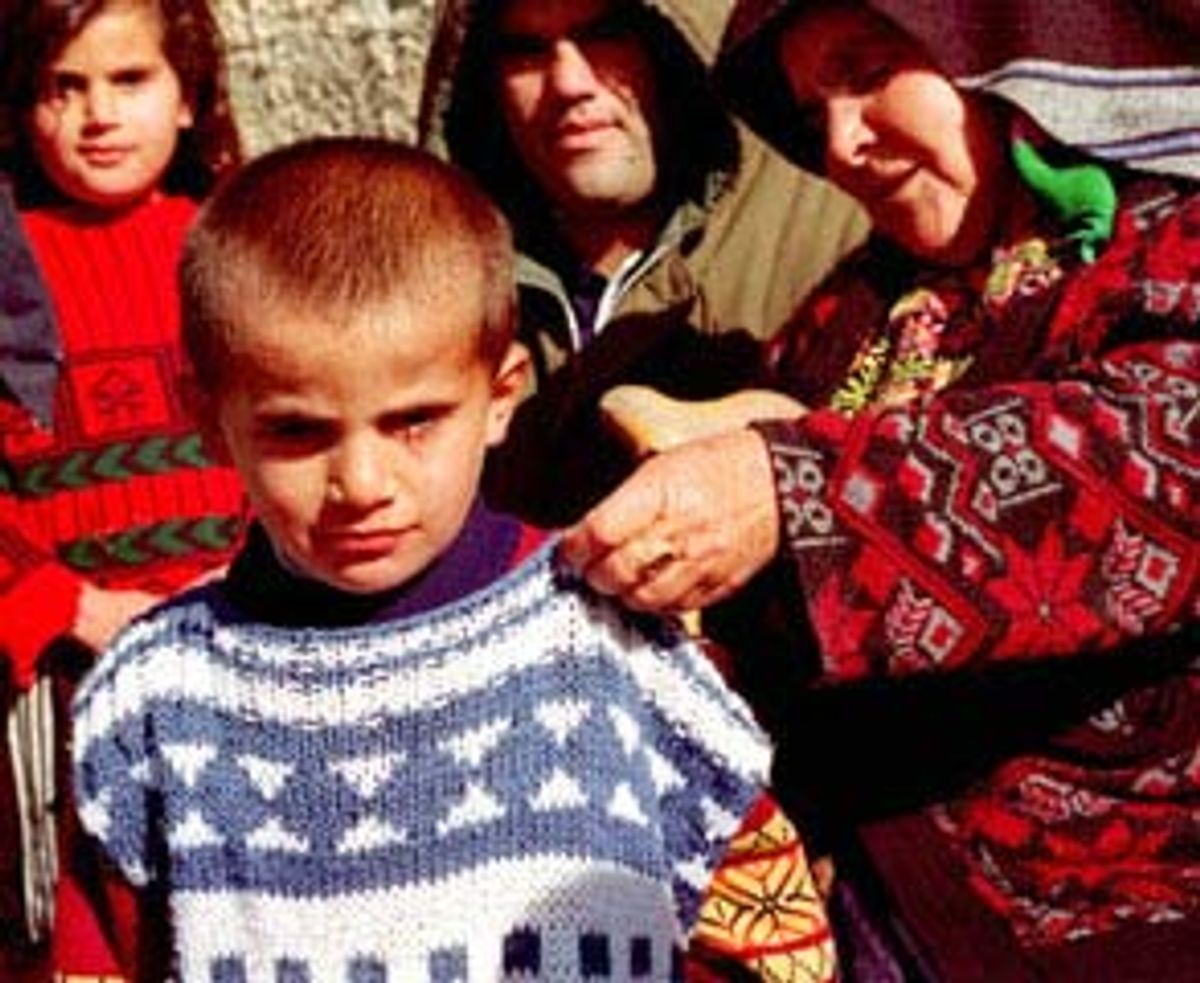 The rubble is still visible among the outgrown weeds in the center of this scraggly Palestinian village in the West Bank. In a commando raid here almost 50 years ago, Ariel Sharon had about 70 Palestinians killed, most of them civilians and many of them women and children, by blowing up their houses with TNT while they were cowering in cellars and backrooms.

On Tuesday, Sharon will probably be elected prime minister of Israel.

Polls give the veteran right-wing politician a double-digit lead over incumbent Prime Minister Ehud Barak -- a sign that Sharon's tough-talking, hard-hitting style has struck a chord in the Israeli public shaken by more than four months of violent clashes with Palestinians. More than 360 Palestinians and over 50 Israeli Jews have died since the Palestinian uprising started in September.

Israelis seem to be looking to Sharon to do the same thing he did 50 years ago: retaliate against Palestinian terrorism and restore Israel's deterrence power. Whether Sharon can or will take similarly brutal and decisive action once in office remains to be seen.

"There is security for me in the peace of Ariel Sharon" reads a campaign banner draped across an intersection leading to Jewish settlements in the West Bank. But for the Palestinians of Kibya a few miles down the road, Sharon's seemingly unstoppable rise to power is a nightmare come true. The commando leader who leveled several dozen stone houses and wiped out whole families in their village is about to rule their land, Israeli-occupied since 1967.

"If there was real justice, Sharon would be in jail by now. He's responsible for massacres not just here but in Gaza and Sabra and Shatila [a Palestinian refugee camp in Lebanon]," said Hammed Ghidan, a retired schoolteacher who was 5 when Sharon led a commando unit and a paratrooper battalion into Kibya. "Israel is rewarding a criminal."

The story of the raid is a painful reminder of the unhealed wounds that stand in the way of reconciliation between Israelis and Palestinians. It is also a cautionary tale for observers who try to predict the nature of Sharon's future term in office.

Every fall in Kibya during the olive harvesting season, the memory of the raid is kept alive in mourning ceremonies and speeches by survivors. A modest memorial plaque behind the village mosque honors the raid's 73 victims. Sixty-nine dead is the figure used in Israel. But, the tally notwithstanding, the facts of the raid are fairly well established.

According to villagers, historians and Sharon's own account in "Warrior," an autobiography published in 1989, Israeli soldiers carrying 1,300 pounds of explosives crept under the cover of darkness on Oct. 14, 1953, across the border between Israel and the West Bank (then ruled by Jordan) in what was to be the first major Israeli retaliation against Arab terrorism. They fought their way in, killing about 10 village guards and two Jordanian soldiers, then set out to methodically destroy civilian homes.

The previous night, an Israeli woman and her two small children had been murdered in their sleep by Arab infiltrators. Kibya, because of its proximity to the border, was believed to be a haven for terrorists. Sharon, then only 25 years old, was eager to prove himself by flexing the muscles of the newly created commando unit he headed.

Until then, Israeli retaliation had consisted in blowing up a few outlying buildings in enemy territory and getting out. But Sharon was determined to inflict more lethal damage. He wanted to prove that "Jewish blood could no longer be shed with impunity. From this point on there would be a heavy price to pay," he wrote in his memoirs.

No one had told the villagers, however, that Sharon was about to change the rules of retaliation. So, although many fled to neighboring villages when they heard the first shots that night, many also chose to stay behind, hiding in haystacks, cellars or sheltered rooms to weather the Israeli attack.

Safiya Ashayeb, a villager in her 80s, remembers that her 11-year-old son hid in a barrel of sewage. "We heard people running, trying to leave the village, but we stayed put because we didn't have the courage to run," she said. Luckily her house was spared -- but not that of her cousins, who died under the rubble.

Sharon claims his soldiers made sure each house was empty before setting off the explosives. Mustafa Kutna, 91, believes the contrary. "Whenever they heard voices or a sign of life in a house, they destroyed it. Sharon buried people alive in their houses," he said.

In one instance, a family of 12 was wiped out. There were also cases in which the men fled but left behind their wives and children. One such man won't talk to reporters to this day because of his shame and grief. About half the victims were women and children.

In "Warrior," Sharon wrote that he found out about the civilian casualties only the next day, listening to Jordanian radio. He acknowledged the tragedy but unapologetically called it a "turning point" that boosted Israeli morale "after so many defeats and demoralizing failures."

Now, almost 50 years later, Israeli voters seem to crave another such turning point: an all-out retaliation after months of failed diplomacy and counterstrikes.

In a private conversation reported in Israel's Ha'aretz newspaper last weekend, Sharon promised to deal with the current intifada by using some of the forceful methods that earned him his nickname, "the bulldozer."

According to this article, Sharon said he would fight Palestinians' shooting at the Jewish neighborhood of Gilo by eliminating row after row of houses in Beit Jala, the village from which Palestinian snipers have operated in the past.

"I know the Arabs," he reportedly said. "They are not impressed by helicopters and missiles. The worst curse is 'May your home be destroyed.'"

The effectiveness of Sharon's brutal raids -- in Kibya and elsewhere -- is open to debate. Terrorism did not stop after the Kibya massacre. On the contrary, infiltrations increased and became more violent.

And the memory of the raid still rekindles deep-felt anger among Palestinians. It inspired a retaliatory action as late as October 1991 when a villager slammed a stolen truck into a hitchhiking post near Tel Aviv, killing two Israeli soldiers and wounding 11.

A larger question is whether Sharon, if elected Tuesday, will be tempted, or able, to resort to the methods of his past.

Some believe the old warrior, now 72, has mellowed and learned his lesson after the Sabra and Shatila massacres of 1982, when hundreds of Palestinian refugees were killed in cold blood by Lebanese Christian militiamen under the Israeli army's watch. Sharon, who did nothing to prevent the killing, was found indirectly responsible for the massacre and forced to resign as Defense minister. He became an international pariah.

Most Palestinians, however, are terrified. They are convinced that the "old Sharon" will burst through the surface of the relatively moderate "new Sharon" designed for electoral purposes.

The most radical among them see a Sharon victory as a welcome opportunity to rip off Israel's friendly, peace-loving guise and show it "for what it is": the truly bad guy of the Middle East. In their dream scenario, Sharon will take on the role of Slobodan Milosevic, the former Yugoslav leader and widely reviled war criminal. The world will then come to the rescue of the Palestinians just as it saved the Kosovars.

Others claim indifference. "Barak and Sharon are the same," said Mohammed Abdel Wahab, 26, whose grandfather was killed in the Kibya raid as he was riding back to the village through an olive grove. "They are the two faces of the same coin. Barak wants to slaughter us from the back," he said, making a chopping hand gesture on the back of his neck. "Sharon wants to slaughter us from the front," he added with a throat-slitting motion.

But if four months of almost daily funerals have made Barak as much of a butcher as Sharon in Palestinian eyes, Sharon's predicted victory is still read as a particularly bad omen.

Mohammed Al-Ajareb, the boy who once hid in the sewage, believes Israelis are electing Sharon because "they want a strong man who keeps killing Arabs." And his mother believes Sharon will indeed satisfy that wish by repeating his past crimes.

"Will the bad ever be good?" she asked rhetorically. "He will always be bad."

But by becoming prime minister, Sharon will also be more constrained than in the past. When Sharon led the raid in Kibya, he was a hotheaded officer who hid his intentions from military headquarters. Dwight Eisenhower had just been made president of the United States, and Israel had not yet made peace with its Egyptian and Jordanian neighbors.

"Whether he's a serial killer or a serial destroyer since age 25, who knows?" said Avishai Margalit, a philosophy professor at Jerusalem's Hebrew University. "I don't believe he will behave like that. He's ambushed -- politically and morally -- by the whole world. He's a bully but he's not stupid."