George Will advocates turning the NEA into the Ministry of Politprop; the "South Park" duo agrees to excise the Bush twins from a new program. Plus: Free to be you and me except on Nike iD. 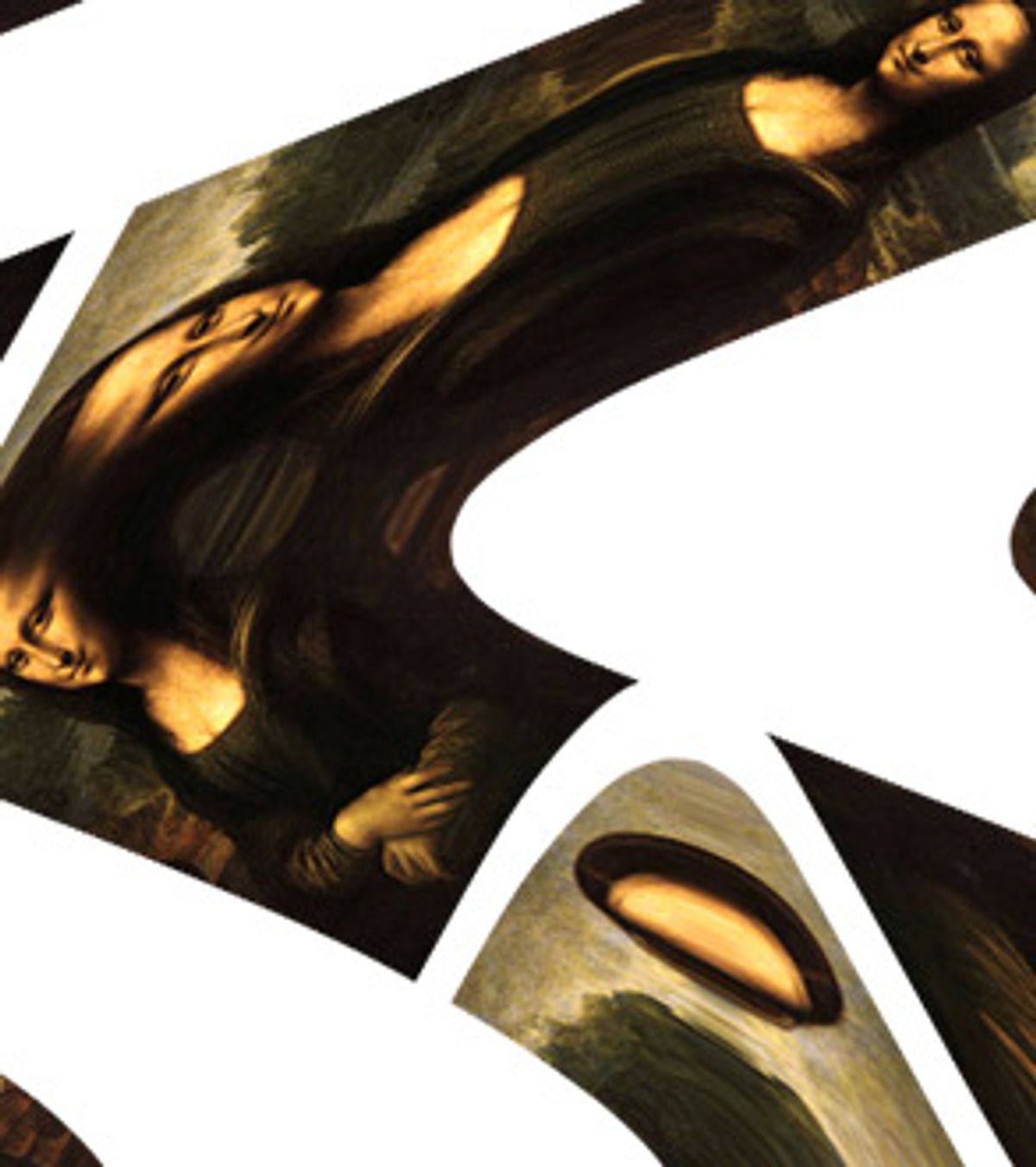 In fact, a government-funded pasquinade by the deceased Bombeck might be just the sort of thing Will could get behind, since it is his thesis that "government should subsidize nothing contemporary -- no art or artist of the moment, only canonical works."

While this is certainly a novel approach to arts funding, we wonder: Do we really want our hard-earned change spent on coaxing dead artists out of the grave and back into the museums and art schools that Will believes are currently dedicated to disparaging "what used to be their raison d'être, the cultivation of connoisseurship"? Wouldn't it be, well, creepy?

But even assuming there were even one self-respecting artist on the planet -- living or dead -- who would not sooner put blade to scrawny wrist than willingly participate in "the cultivation of connoisseurship" in the likes of Will (or anyone else for that matter), it would still seem unlikely that the roughly 64 cents per person per annum that the federal government allocates to the National Endowment for the Arts would be sufficient inducement to tempt anyone out of permanent retirement.

In any case, says David Raskin, assistant professor of art history, theory and criticism at the School of the Art Institute of Chicago, "connoisseurship" is still very much cultivated in art schools. The difference lies in the use to which it is put.

"Originally," Raskin says, "museums were the private collections of noblemen. They were designed to protect and ensure the value of the art these collectors acquired. They were not open to the public, and histories were written around promoting the value of the specific art within them. Nowadays museums understand the value of art not in terms of dollars, but in the furthering of a shared tradition. They are concerned with building a shared culture, not one built on nostalgia for a long-dead past."

But trifling matters such as these will not keep Will from his crusade against those pesky, subversive "postmodernists" who are intent on ruining our culture.

"If you care about the condition of our culture," Will writes, "read Lynne Munson's mesmerizing book, 'Exhibitionism: Art in an Era of Intolerance.'" Munson, who worked under Lynne Cheney when Cheney headed the National Endowment for the Humanities, reveals the shocking truth about "postmodernists": They "like making art out of opinions and unfiltered experience."

Who are these lunatics and how can they be stopped?

Actually, "no artist nowadays uses the label 'postmodernism,'" Raskin says. "It had a lot more cachet in the '70s and '80s. Artists may be interested in poststructuralist philosophical ideas as a way of making sense of the world in which we live, but I can't think of a single young artist -- or old artist, for that matter -- who calls himself a postmodernist. 'Postmodernism' is a bogy monster designed to frighten middle America. Nobody knows what it is, but they get the sense that it's bad."

But thanks to the miracle of connoisseurship, Will and the mesmerizing Munson are able to assert that "excellence in art can be defined and identified by scholarly judgments that are more than political acts or manifestations of cultural biases."

Most scholars would disagree. "To separate the aesthetic from the cultural is a false division," Raskin says. "Questions of excellence are never objective. They are political values. To say art is not political is to say it has no relation to other aspects of life."

Of course, Will is not suggesting that politically motivated and culturally biased fringe weirdos of the past should not be studied and appreciated. On the contrary, what he means is that now that they are safely dead and their political views are no longer current, they are less likely to irritate him personally. Had Will been alive and bloviating in another time, he would have been the first to chase Goya, Hugo, Picasso and Jonathan Swift out of town with a pitchfork.

Predictably, we have a few overeager day-trippers at the Houston Museum of Fine Arts (who mistook a burlap-covered statue that was being restored for a "postmodernist" statement on hidden inner beauty) to thank for Will's latest anti-art jeremiad. Concluding that this sort of extemporaneous theorizing by amateur museum-goers, though ludicrous, is "understandable given what many museums have become partly because of the National Endowment for the Arts," Will takes the anecdote -- "they waxed long and hard about the appropriateness of the texture of burlap in relation to the medium used" -- as proof that art has gone to hell in a "non-Western" handbasket. Exhuming a long-dead horse, he seizes the opportunity to wax long and hard himself. The old burlap sack (painting hung upside down/piece of machinery mistaken for art) trick kills them every time.

"Connoisseurship assumes that esthetic values have ethical force ... that [art] pulls those who comprehend it up from the everyday," he writes. And when Will says, "High art should elevate," he isn't kidding. "Postmodernists believe that all cultures are created equal," scoffs he who comprehends better, pointing out a grievous misconception that has somehow resulted in "many museums" bringing "visitors in down low" through side entrances clearly intended for the help. Entering a museum through a "columned, neo-classical" entrance evocative of bygone "excellent" civilizations, Will argues, can help "civilize those who learn how to contemplate [their works] properly."

So maybe we're contemplating it all improperly; or maybe Will is just hoping that a vigorous climb up the "steep, stately flight of steps" of our local museum will leave us too winded to notice that his argument rings a few jolting rhetorical bells.

"What government should do first," writes the prescriptive art lover in a different column, "is define culture, for policy purposes, the way critic Allen Tate did, as 'the study of perfection, and the constant effort to achieve it.'"

Then, having increased the size of government by at least one art czar ("Considering everything George Will has written over the past 20 years," asks Raskin, "why would he entrust the government to do anything?"), Will goes on to dyspeptically question "whether this democracy" is even "capable of a cultural policy unapologetically oriented toward excellence."

Most democracies aren't, of course, lest they should cease to be democracies. But Will is not the first critic of the notion that "all cultures are created equal" to believe in the "civilizing" and "elevating" effects that government-sanctioned art can have on the incapable masses.

"Government, which subsidizes soybeans, can subsidize art, too," writes Will magnanimously, "if government can entrust cultural policy to people -- postmodernists need not apply -- who know how arts differ from soybeans."

Of course, the last time a party in power tried to define culture, draw a connection between race and art, and entrust "cultural policy" to party loyalists ("degenerates," Jews and Bolsheviks needed not apply), Chagall, Kandinsky, Klee and other modernist masters wound up having to leave Germany.

But Will is probably not advocating Nazi or Stalinist policies toward art. (He probably hasn't even had the chance to cultivate his connoisseurship of them.) Most likely, he is just happy to see his boys in office. Can you see his little chest inflating as the pre-approved music swells?

"An entire sensibility -- it is called conservatism -- is bound up with the idea that time is a test," Will concludes, "that some things pass it, but most flunk."

Sure. And another sensibility -- it is called fascism-- is bound up with the idea that a reactionary government knows which things will pass that test in advance.

But then, we like art made out of opinions and unfiltered experience, so who are we to say?

And watch out for those corporate-funded postmodernists, too ...

Opponents of federal arts funding have long held that the market should decide which forms of cultural expression see the light of day and which do not.

That's why we have "Temptation Island."

But Comedy Central has ordered "South Park" creators Matt Stone and Trey Parker to remove all references to the 19-year-old Bush twins from their upcoming show, "That's My Bush," a parodic look at first-family life.

Parker told the Associated Press that he understands the decision while disagreeing with it. "[Comedy Central is] a corporation, and as much as we like everyone over there and think it's the best place we can possibly be, they're still a corporation. The bottom line is it's not about freedom for them, it's about making money."

Then again, it isn't always about making money -- sometimes it's about protecting the brand from crazed postmodernists.

When Peretti ordered a pair of sneakers to be customized with the word "sweatshop," Nike promptly cancelled the order.

Via a form e-mail Peretti was informed that his order had been cancelled "for one or more of the following reasons:

1) Your Personal iD contains another party's trademark or other intellectual property.

2) Your Personal iD contains the name of an athlete or team we do not have the legal right to use.

3) Your Personal iD was left blank. Did you not want any personalization?

4) Your Personal iD contains profanity or inappropriate slang, and besides, your mother would slap us."

Peretti replied, pointing out that his order did not violate any of the criteria given.

"I chose the iD because I wanted to remember the toil and labor of the children that made my shoes. Could you please ship them to me immediately?"

Nike iD -- despite its flagrant use of inappropriate capitalization -- responded by saying that the order had been cancelled because it contained "inappropriate slang."

Peretti then pointed out that "after consulting Webster's Dictionary," he "discovered that 'sweatshop' is in fact part of standard English, and not slang."

"The word means: 'a shop or factory in which workers are employed for long hours at low wages and under unhealthy conditions,'" he explained, "and its origin dates from 1892."

Peretti also reminded Nike iD that its Web site states that Nike-brand shoe personalization is all about "freedom to choose and freedom to express who you are."

"I was thrilled to be able to build my own shoes," wrote Peretti, "and my personal iD was offered as a small token of appreciation for the sweatshop workers poised to help me realize my vision."

Unwilling to be toyed with, Nike iD retorted, "The rules for personalization also state that 'Nike reserves the right to cancel any Personal iD up to 24 hours after it has been submitted,'" and further hinted that Peretti's request might have been denied because it contained "material that we consider inappropriate or simply do not want to place on our products."

Peretti again responded stating that he had decided to order the shoes with a different message, with one small request.

"Could you please send me a color snapshot of the ten-year-old Vietnamese girl who makes my shoes?"

According to Pennlive.com, Zimmerman, who has three previous convictions for shoplifting, stole $66 worth of grooming products from a local market.

"When you go into stores, I want those store owners to keep a special eye on you," the judge told Zimmerman after hitting on the fanciful badge idea and fining her $100. "Maybe they will keep a closer eye on you and make it more difficult for you to continue this pattern of retail thefts."

As far as we know, "convicted shoplifter" does not violate any of Nike iD's criteria for personalization.