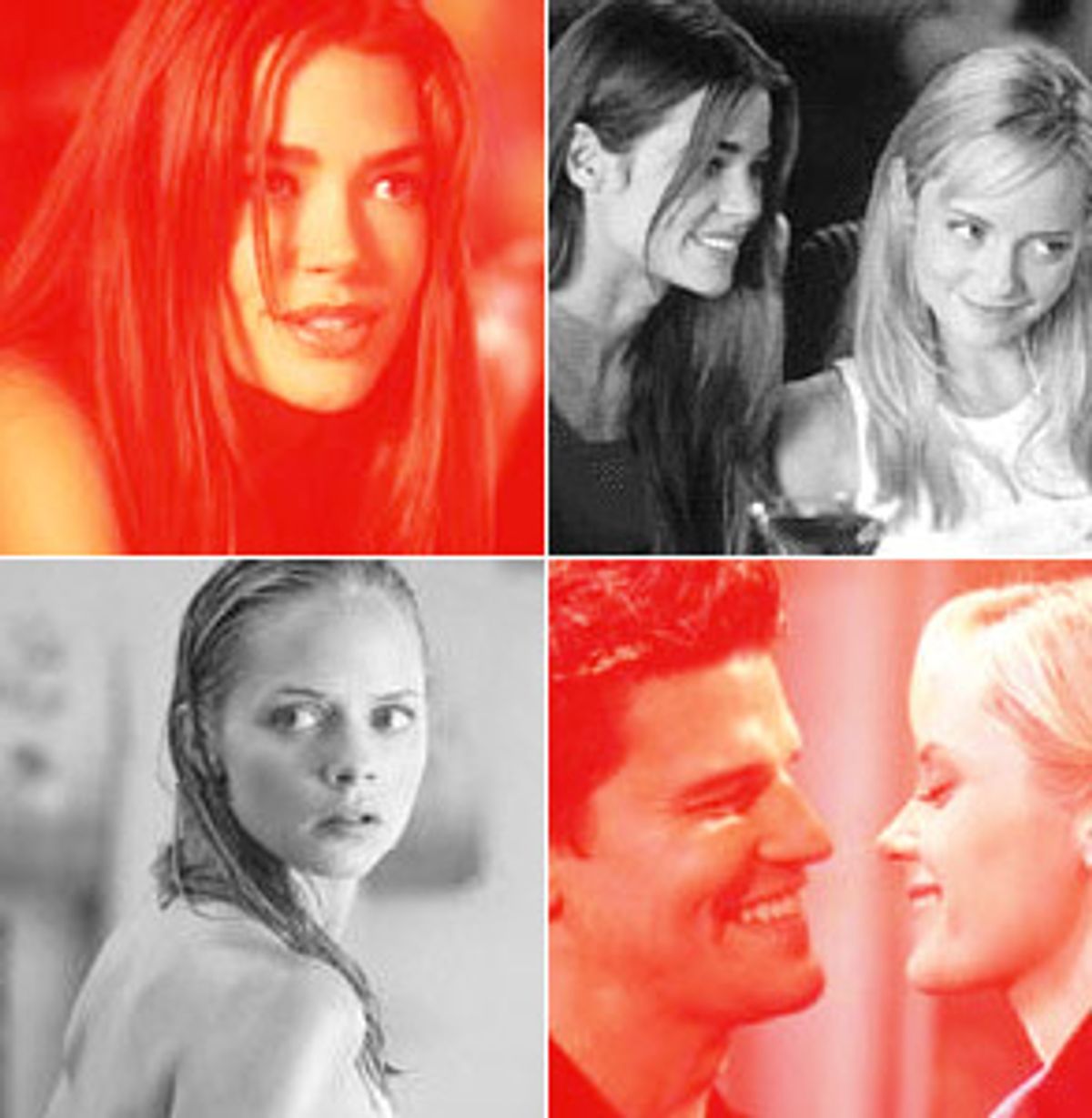 OK, so "Valentine" is, like, this new serial-killer movie that totally blows. But kind of in a good way. Like, it's funny. It's a little bit like one of those "Kiss the Lamb Collector" serial-killer movies and a little bit like "Scream" and "Scary Movie" and a little bit like some trashy show on the WB where you totally realize that it's lame and you shouldn't be watching it but you can't stop. I guess that makes sense because the director of "Valentine," this guy named Jamie Blanks, also made "Urban Legends," which is pretty much that way too.

But anyway, in one way "Valentine" is sort of weird and depressing because all the guys are total lech moron losers and all the girls are total bimbo bee-yatches. You can't even tell who the killer is, except that you kind of can.

The movie basically starts where some girl is doing, like, a medical-school dissection on some dead body and she's all alone in some big empty place where, like, the electricity doesn't totally work, so of course she gets totally killed. Except that there was an earlier part that was like a junior high flashback where all these girls were mean to some total dork-out and he got a nosebleed and was all, like, "Oh, I'm going to grow up and get supercreepy."

Then we're back in the present and this other girl gets a valentine from some weirdo that says, "The journey of love is an arduous trek/My love for you grows as you bleed from your neck." (Hello?) And then these other two girls get chocolates filled with actual maggots and it's totally gross. (One time I saw this other movie that was Italian or something by this guy named Dario Argento that had, like, 50 times as many maggots and somebody had to actually jump into a whole pit full of them, so I was kind of like, "Whatever.")

So, yeah, all these girls are cute and blond but look all the same, except for Denise Richards, who is not blond and who all the guys will definitely recognize because she was a Bond girl and pretty much naked in magazines and everything. All of the blond girls fight and tell each other how fat and retarded they are and how each other's boyfriend must totally be the killer. Only one of them ever acts normal or has a boyfriend where she, like, knows his name, and that's the one with straight blond hair named Kate (Marley Shelton).

But her boyfriend drinks a lot and lies about it. He also has a sort of nasty haircut. He's that David Boreanaz who plays the totally estranged love of Buffy the Vampire Slayer's life on "Angel." Then there's this other guy hanging around (Johnny Whitworth, who was on "Party of Five," like, forever ago) who's, like, a sleazy video artist or something. He'd totally look like Charles Manson if somebody gave Manson a nice shampoo and blow-dry. At his art opening, he gets up on a table and is all, like, "Valentine's Day. What does it mean? What's it all about?" Kate says his art is "like a lingerie commercial," and I'm like, "Yes."

"Valentine" is totally coming out a week before "Hannibal." (Like we're not going to notice that Jodie Foster somehow turned into Julianne Moore!) But it's not even competing with it because it's totally not serious or scary, even if it has a few scenes where the killer jumps out wearing a Cupid mask and you might totally spill your Dr. Pepper that cost way too much. Paige (Richards) and Kate and Dorothy (Jessica Capshaw), who used to be fat and was like supermean to that junior high kid, have to figure out which of their boyfriends is the killer, unless it turns out to be one of them instead. Oh, my God, I totally gave you a hint!

Anyway, one of them winds up totally alone in a big house with the killer and one of them has to, like, dodge a superphallic power drill while trapped in a hot tub. And Paige gets to tell some guy, "You brought me up here to show me your penis. That's so sweet!" After which she says, "Now this party officially sucks." Well, it kind of does, but I had fun anyway.