"Bing Crosby: A Pocketful of Dreams" by Gary Giddins

A new biography tries to bring back to life the now-neglected, once absurdly popular crooner. 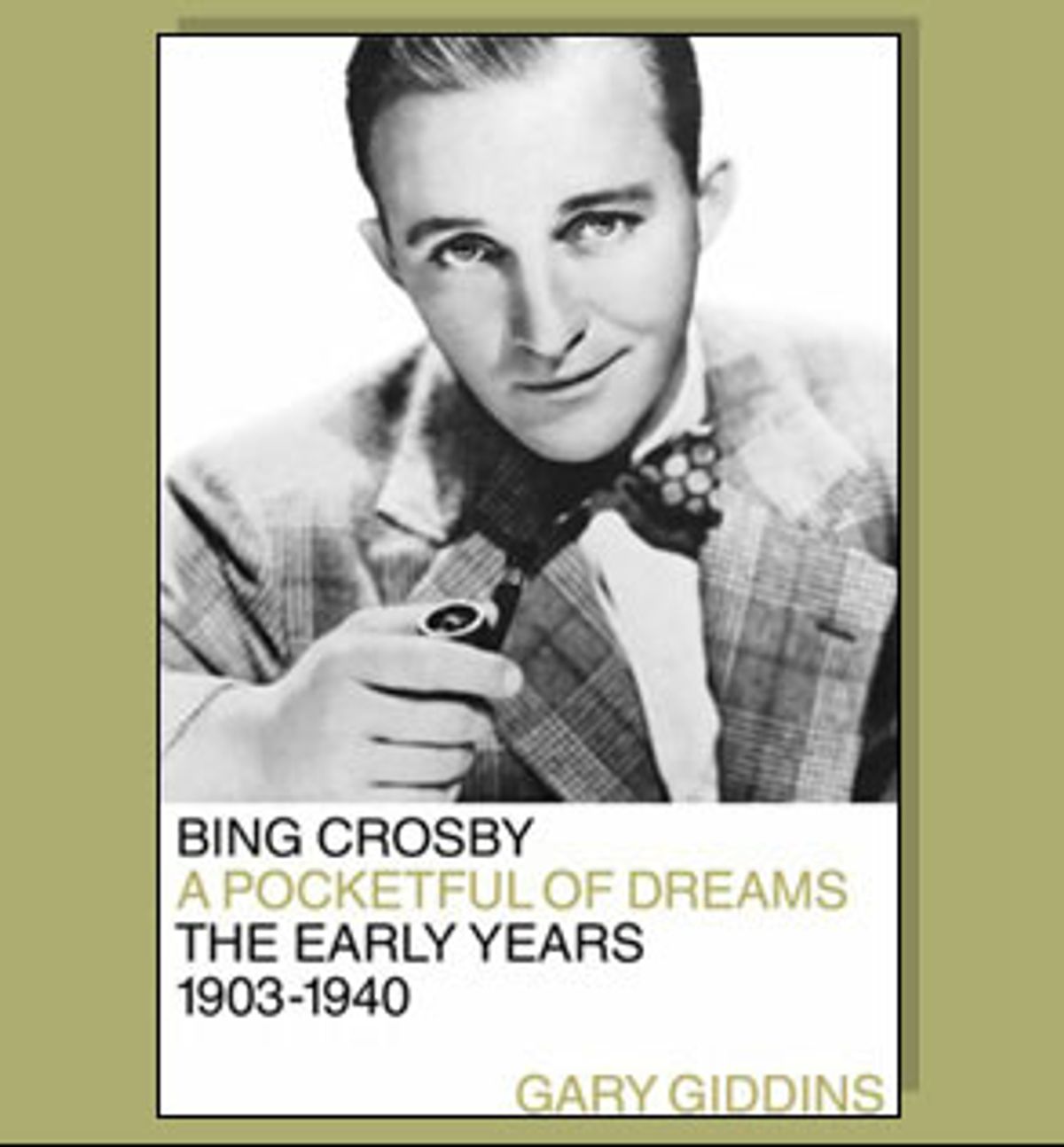 The box sits in the corner of my record case, unopened for at least three decades. A collector once offered me $500 for it. The songs on the 10 records in the case -- "Pennies From Heaven," "Sweet Leilani," "Moonlight Becomes You," "San Fernando Valley," "Mexicali Rose," "Swinging on a Star" and, of course, "White Christmas" -- were probably the most popular songs of their time. They survive today as artifacts of a past still strongly felt but dimly remembered. I never knew this past, nor did I ever see the America for which Bing Crosby still serves as an avatar, but I have a vague nostalgia for it. It was an America of small towns ("Dear Hearts and Gentle People") devoid of prejudice, where white people and black people went fishing together ("Gone Fishin'" with Louis Armstrong) and gathered, late in the day, at the local tavern in faded golf slacks to sing college songs ("The Whiffenpoof Song"), whether or not they went to college. And, though everyone lived in the San Fernando Valley, they dreamed of a White Christmas.

I can't explain or justify this strange fact, but I know every song on 10 Bing Crosby records better than I know the music of my own generation that I loved the most, Van Morrison's "St. Dominic's Preview" or the Stones' "Exile on Main Street." My father, though ravaged by Alzheimer's, died remembering every lyric of every song on them easier than he could remember the names of his grandchildren. I think he liked the Irish songs best. The rest of his family sang along with Perry Como and Vic Damone, but my father, an Italian kid from South Philadelphia, walked around the house crooning "Danny Boy" and "Too-Ra-Loo-Ra-Loo-Ral." I'd give the world if he could sing those songs to me today.

"Bing: A Musical Biography" was released in 1954. The cover painting shows a bodiless ghost dressed in sport shirt and checkered golf slacks sitting on a stool, with a pipe floating in the air and a golf club leaning against the ghost's knee and a brown felt hat on the imaginary head. In the background is a tiny racehorse; a microphone with the logo "Decca" hangs in front of the ghost. When I was born there were probably few Americans who couldn't have told you who that figure was supposed to represent; today, I doubt if one American in 20 could conjure up a scrap of information about the man whose voice, as the inscription on the inside case cover says, "has been heard by more people than the voice of any other human being who ever lived."

I don't know how that conclusion was arrived at, but surely no one in 1954 would have challenged it, and who has come along since then to replace him in the ears of the world? Put it this way: In 1934, Pu Yi, the boy emperor of China, the last inheritor of a 5,000-year civilization who spent most of his early life secluded in the Forbidden City, told a foreign journalist that, among other Western pleasures, he wanted to hear more Bing Crosby records. Who might he ask for today? Sinatra? Elvis? The Beatles? Garth Brooks? Whoever VH1 is featuring this week?

It's probably impossible for anyone under 40 to truly understand that Bing Crosby was, in the words of his new biographer, Gary Giddins, "the most influential and successful popular performer in the first half of the 20th century." Late in his career, after Crosby more or less relinquished the adult portion of his potential audience to Sinatra, while the teenagers invariably went to rock 'n' roll, the kind of real, monumental popularity Bing Crosby had enjoyed ceased to exist.

Here are some points on which you could get a solid consensus among historians: He was the most popular recording artist of all time, selling more records and earning more radio listeners than anyone else, and for longer than anyone else, nearly a quarter of a century. No one else was even close, and in terms of a share of the recording market, no one is close today. And the records represented only a part of Crosby's popularity. For nearly two decades he was a leading box office attraction, placing No. 1 for five straight years. He was the most popular radio singer of all time and probably created the idea of the "popular" singer as we know it.

And -- incredibly, it seems to me -- nearly a quarter of a century after his death his legacy to American popular culture, to the very idea of popular cultures throughout the world, has vanished like the Titanic. Except for the inevitable replays every December of his most popular record, "White Christmas," and TV repeats of the awful movie named for it (the Irving Berlin song was actually written for an earlier Crosby-Fred Astaire musical, "Holiday Inn") and the lingering bad taste left by a "Mommie Dearest"-type memoir by one of his spoiled children, a generation has grown up completely unaware of who Bing Crosby was. Part of the problem was Crosby's laziness. By the '50s, when singles gave way to albums, Crosby was out running his Pro-Am golf tournament and making occasional TV specials. He never learned to master the studio the way Sinatra did, and the result is that most of his records, however progressive they were in their own time, sound tinny and dated even to young listeners who dig Sinatra and Tony Bennett.

And just as large a part of the problem is Crosby's incredible energy. He recorded so much over so long a period in so many styles of music and with so many different singers and musicians and orchestras and combos that it's virtually impossible to take a young music fan into a CD store and show him a compilation that reflects Bing Crosby's achievement. Jazz with his pals Joe Venuti, Eddie Lang and Louis Armstrong, jazz-flavored pop-swing with Paul Whiteman, duets with the Boswell and Andrews Sisters and the Mills Brothers, country and western (he was the first mainstream singer to record songs like "San Antonio Rose" and was a more popular western balladeer than any singing cowboy), lush Hawaiian pop tunes, sentimental Irish ballads, sophisticated show tunes, musical Americana (Eleanor Roosevelt loved his rendition of "Home on the Range" so much she placed it in the Smithsonian) -- the range and variety is staggering. Not only did he bring all these strains of music together in one place, and then1 out again into the mainstream. He was, for many years, the most popular exponent of nearly all of those styles. But the evidence of Crosby's impact that survives on CD is sketchy, and the fact that most of the best compilations are issued by British companies is a national disgrace.

How is Bing Crosby remembered today? Here's David Thomson's dismissal from his "Biographical Dictionary of Film": "Crosby excelled in that area where film meets advertising. He was the proof that unexceptional, lazy pleasantry was more desirable than prickly, difficult originality. His singing had all the charming naturalness that every amateur crooner believed lay within his grasp ... It is barely noticeable that he is interested in nothing, for interest dies away on his soft voice and drowsy smile." I thinks it's safe to say that if more critics don't share Thomson's view it's because they haven't stopped to think about Crosby at all, and in truth there isn't much of a body of work since 1950 to inspire anyone to search deeper.

Into this void comes Gary Giddins' "A Pocketful of Dreams," a brave attempt to caulk a major crack in the history of American popular culture. To the degree that Giddins succeeds, he doesn't merely explain Bing Crosby; he explains a great deal of what happened to American pop culture from the late '20s to World War II. Giddins begins defensively, acknowledging the legitimacy of Crosby's later critics: "Yet to the swarming generations born after the war, all the reverence was a mystery. He was known to them as a faded and not especially compelling celebrity, a square old man who made orange juice commercials and appeared with his much younger family on Christmas telecasts that the baby boomers never watched. He had long since disappeared from movies and then the hit parade." But "his contemporaries had a more accurate sense of him. Crosby was a phenomenon in the cultural life of the United States long before the war. He had helped lift morale while elucidating the American temperament during the Great Depression ... Combining musical cultures as no one had ever done, he made the country a more neighborly and unified place."

These are big claims, and in most of them, Giddins' points survive his exaggerations. For instance: "A performer of such enormous popularity becomes, inevitably and in spite of himself, a social critic. Crosby, an unreasonably modest man who never took credit for anything musical, let alone social or political, nonetheless played a coercive role in the acceleration of civil rights." As someone who first encountered Louis Armstrong on his father's Bing Crosby records, I'm happy to hear someone say this, however overstated it might be.

It's a shame that "A Pocketful of Dreams" doesn't come with an accompanying CD so readers can put the book down and hear what Giddins is talking about.

The more so because it is precisely the musical Bing Crosby who gets lost as the book goes on. The truth of the matter is that while Bing Crosby the artist and Bing Crosby the phenomenon are interesting subjects, Bing Crosby the man really isn't. Giddins has some interesting revelations to throw out -- that Louis Armstrong introduced Bing to marijuana, which he later recommended to his oldest son as preferable to alcohol, that the ultraconservative Hollywood veteran opposed the Vietnam War, that Crosby's fabled friendship with Bob Hope didn't really begin till they had been working together for more than 20 years -- but it seems as if there are at least a hundred pages between them. "A Pocketful of Dreams" moves at a crawl; after Page 163 Bing and his best friends are still relegated to Paul Whiteman's choir, and some readers may start wondering if he's ever going to get to be the Bing Crosby. Every letter to family is quoted in full, every radio introduction is repeated in its entirety. The overall effect of the ocean of detail is to make Bing Crosby seem not closer to us but more remote.

Was 700 pages really necessary to chronicle the life -- excuse me -- the first half of a life -- of the man whose greatest achievement was making his art seem casual? Giddins' critical instincts about Crosby's music fail him as a biographer; the mountains of detail about taxes and diversified business interests and recording contracts only blur the image of a man who comes into focus with remarkable ease in his art.

I don't want to sound ungracious about a book that I devoured as if it were written for me, but I can't imagine who is going to read "A Pocketful of Dreams" as eagerly as I did. I'm still left without a way to introduce my friends to Bing Crosby, and I can only hope that, at the least, this book spurs a set of CDs, with notes by Gary Giddins.