GOP: We're in a recession, honest

"Reading is the beginnings of the ability to be a good student," Bush says; Plus: Morning briefing 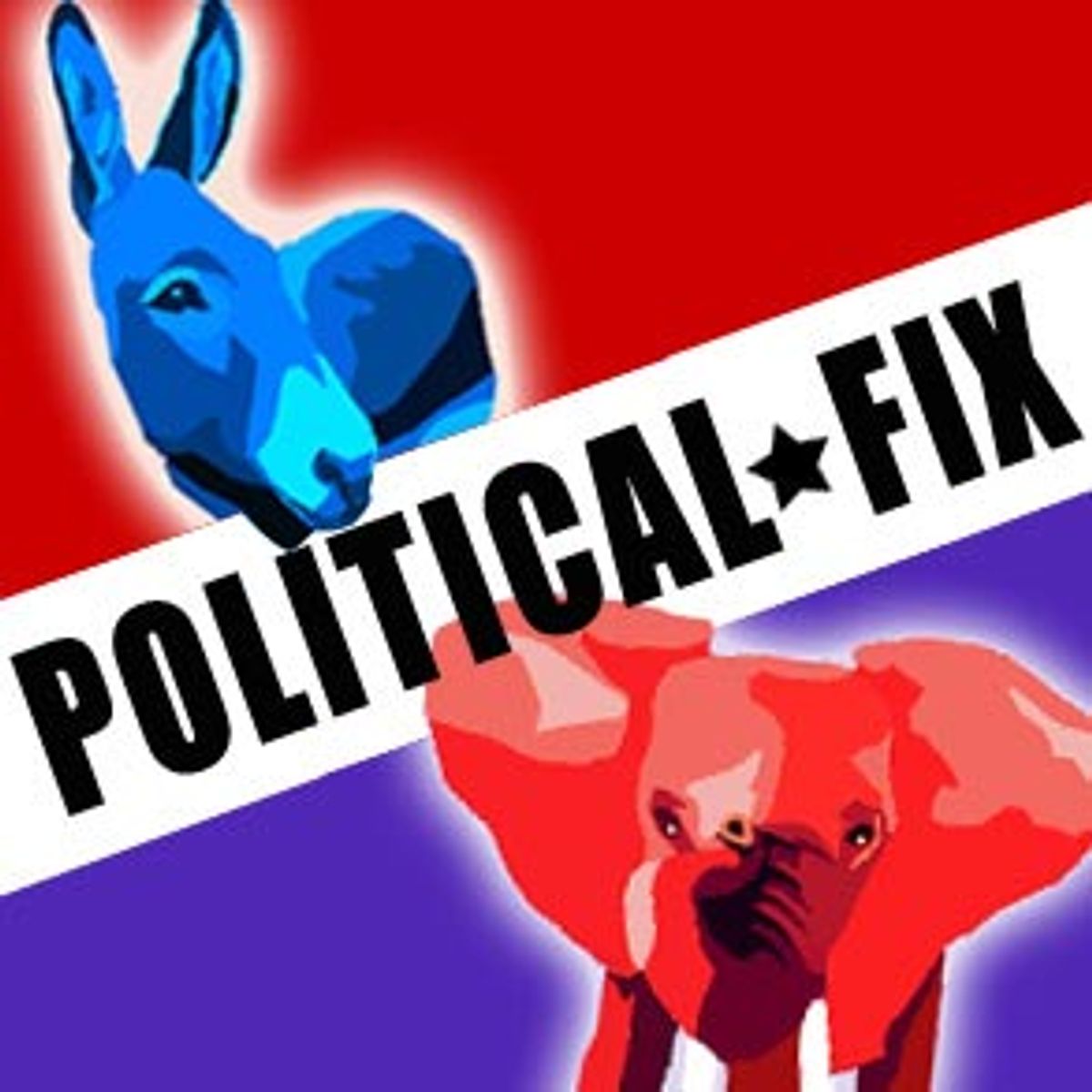 Are we in a recession or aren't we? In Washington, it all seems to depends on whether you support the tax cut promoted by President George W. Bush, or don't.

When he took his $1.6 trillion tax cut to the Hill this week, Bush was clear that America needed a fast economic tuneup, but resisted the "r" word. "A warning light is flashing on the dashboard of our economy, and we just can't drive on and hope for the best. We must act without delay," he said.

Other Republicans fanned the flames. During CNN's "Crossfire" on Thursday, Rep. John Shadegg, R-Ariz., a fan of the Bush tax cut, declared that "the economy is soft at best, and in a recession by many indicators." His solution was a "more rapid implementation of tax relief."

When Sen. Kay Bailey Hutchison, R-Texas, spoke to CNN the same day, the recession was already here. "We don't want this recession to get deeper," she said.

Former Speaker of the House Newt Gingrich was a step ahead of her. "The American worker deserves a tax cut, and I think with this economy, a tax cut will help us in a period of recession," he told Fox News Wednesday.

The pioneer of Bush administration recession talk, however, is Vice President Dick Cheney. Days after suffering a heart attack, he nearly gave some economists a coronary, declaring on Dec. 3, "We may well be on the front edge of a recession here."

There was a curiously dissenting voice from recession panic close to the top of the Bush economic squad. Newly minted Treasury Secretary Paul O'Neill had kept a cool head. But even he has changed his tune, if subtly, in the last few days.

On Wednesday, when asked on CNN's "Moneyline" if the country was in a recession, he replied, "No." When asked if we were at "zero growth," the stagnant period on the tipping point of when a recession could occur, as Federal Reserve Chairman Alan Greenspan has said described it, O'Neill said, "Well, I take my economic advice in a certain way from Mr. Greenspan, and if he says the growth rate is about zero, I don't think there is a basis for saying it is worse than that at the moment; I don't see any data that convinces me it is worse than zero or maybe even .5 percent real growth in the economy right now." But by Thursday, on PBS's "NewsHour with Jim Lehrer," O'Neill was saying, ''I've looked at the data with [Greenspan] and I think we're hovering around a zero rate of growth. I would say someplace between minus 0.5 and plus 0.5, in that range." Then, in plugging the Bush tax plan, O'Neill said, ''At the end of the day, whether we're going to give the American people an insurance policy that holds out the prospect that we're not going to have a deep recession is in the hands of the Congress.''

The facts, however, suggest that recession could be months away. Technically, a recession is two consecutive quarters of negative economic growth, and there hasn't been one since the last Bush administration.
-- Alicia Montgomery [3 p.m. PST, Feb. 9, 2001]

"One reason I like to highlight reading is, reading is the beginnings of the ability to be a good student," Bush said.

"This is also Black History Month," the President added. "And what's important about Black History Month is to read about different heroes who have made a difference in making history, and to realize there are fantastic role models. So this is a combination of history, plus reading. So thanks for letting me come by."

If Bill Clinton thought that leaving office would mean escaping endless congressional probes, he was wrong.

On Thursday, Republicans opened hearings into his 11th hour pardon of fugitive financier Marc Rich, a commodities trader who fled America for Switzerland in 1983, days before being indicted on tax fraud charges. There has been considerable speculation as to whether Clinton's act of mercy had more to do with the merits of Rich's case or with the over $1 million in campaign contributions that Rich's former wife, Denise Rich, has given to the Democratic Party over the years.

Though Denise Rich declined the Government Reform Committee's invitation to testify, citing her Fifth Amendment rights, committee chairman Rep. Dan Burton, R-Ind., is pursuing a tongue-loosening grant of immunity for her. In her absence, critical congressmen grilled Jack Quinn, Marc Rich's attorney. It was Quinn who steered Rich's pardon application to Clinton, for whom Quinn once served as a White House counsel.

Whatever the committee finds, presidential pardons are not reviewable by Congress, and it's unclear what might come from this investigation other than a scathing report. The committee could call Clinton as a witness, though the Republican leadership has so far been cool to that idea.

Congress warmly greeted President Bush's $1.6 trillion tax cut plan, which was formally submitted on Thursday. Some moderate Republicans have vowed to cut the cut down to size, claiming that a $1.6 trillion tax refund would threaten a balanced budget.

Ralph Nader, the man who cut former Vice President Al Gore down to size among liberal voters, made a triumphant return to Capitol Hill on Thursday, meeting with House Minority Leader Dick Gephardt, D-Mo. While Gephardt had no comment about the substance of the meeting, Nader said that the Democratic leader promised to renew the cooperative relationship Nader had enjoyed with congressional Democrats prior to the election.

While some Democrats blame Nader for Gore's narrow loss in November, the former Green Party candidate insists that Gore and the Democrats lost the race all by themselves.
-- Alicia Montgomery [5:45 a.m. PST, Feb. 9, 2001]