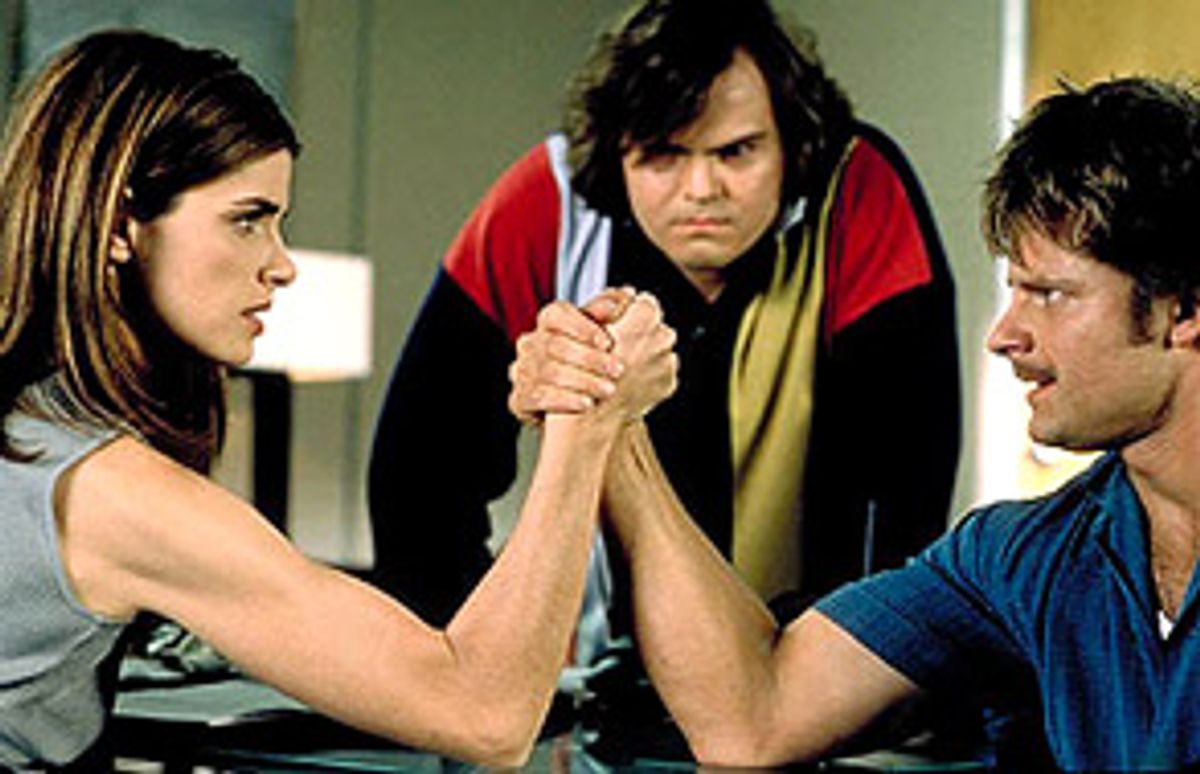 Has dude humor always been with us, or is it, uh, an artifact of a spiritually and culturally impoverished era? I don't pretend to know, but I tried to think about it while I was laughing myself sick over "Saving Silverman," a sublimely idiotic farce in the "There's Something About Mary" tradition. Perhaps if I considered history in the appropriate light, I could convince myself I wasn't a moron. Do ancient Assyrian texts, if translated correctly, mention getting wasted on sesame liquor, pursuing exotic hotties and then worshiping the latrine god? What were James Boswell and Samuel Johnson, after all, but the leading party animals of 18th century London?

All right, so I'm grasping. The point is that if any part of you is a dude or craves dudeliness, in however ass-backward and supposedly ironic a fashion, you'll find moments of ecstasy in "Saving Silverman," one of those rare Hollywood gut-busters in which the funniest stuff isn't necessarily in the trailer. It's got a crackling cast of youngish comic talent and an action-packed script from first-timers Hank Nelken and Greg DePaul that, as my companion observed, dares to be ludicrous from the first page onward. Armed with this weaponry, veteran comedy director Dennis Dugan (who made "Big Daddy" and "Happy Gilmore" for Adam Sandler) simply keeps things moving and wraps everything up in 90 minutes, at which point the entire cast finds itself on stage with Neil Diamond.

Much of the soul and irrepressible cheer of "Saving Silverman" lies in the pairing of Jack Black and Steve Zahn as J.D. and Wayne, two incompetents on the far slope of their 20s who must fight the good fight to free their pal Darren Silverman (Jason Biggs) from the wrong woman. Dumb-ass buddy couplings are a long and illustrious tradition, stretching back from Beavis and Butt-head to Bill and Ted, Yogi and Boo-boo and Laurel and Hardy, and anybody who appreciates it will find these two a delight.

Black has become something of a hipster hero for his HBO variety series (with his band, Tenacious D) and his roles in "Jesus' Son" and "High Fidelity." As J.D., he seems to be filling the John Candy/Chris Farley niche, as the overweight wild man whose immense self-confidence makes it impossible for him (or us) to see himself as a pathetic loser. Zahn (who has had parts in "Out of Sight," "Hamlet" and "The Object of My Affection," and a star role in "Happy, Texas") is more like the one-time high school stud who still cuts doughnuts in people's lawns with his Camaro, pumping Aerosmith and guzzling Southern Comfort, blissfully unaware that the world has moved on and he's stuck in senior year.

Wayne and J.D. live in a world of beer bongs, Sunday football parties and Neil Diamond worship. (They pay tribute in a cover band named Diamonds in the Rough and their shabby Seattle house features a shrine of dubious memorabilia they call the "hall o' Neil.") But when they set up lovelorn Darren, still pining for his lost high school sweetheart, with an unapproachable babe they dub "the queen of all hotties," something dreadful happens. Judith (Amanda Peet) is not merely a hottie but a demonic psychologist who takes control of Darren and drives him headlong into the realm of adult cocktails, fine Italian fabrics and relationship counseling. As J.D. says much later in the film, "Dude, there was nothing I could do. She used her superintellect on me. She's like Hannibal Lecter!" (Nice timing, fellas.)

Nelken and DePaul have learned (from the likes of the Farrelly brothers and Owen Wilson and Wes Anderson of "Rushmore") that in this kind of comedy you leave reality behind immediately and never look back. Of course Judith is a feminazi cartoon character with no relationship to any real or possible woman. But complaining about that is a little like protesting that "Moby Dick" doesn't make sense because whales don't really harbor vengeful emotions. Like the whale, Judith is the yardstick by which Wayne and J.D. must measure their masculinity -- and, needless to say, fall tragically short.

Biggs, who soared to stardom with his role in "American Pie," is almost lost amid the antic frenzy of "Saving Silverman" as straight man Darren. But his essential mode of sweetness and gullibility creates a valuable anchor for the audience. We can see that Darren goes along with Judith's emasculating mindfucks (which range from taking her last name to getting butt-cheek implants) out of a genuine desire to grow up and have a real relationship. When bubbly Sandy (Amanda Detmer), the missing high school flame, resurfaces, Darren momentarily glimpses a future of true love rather than one of fake-butt-cheek-wearing, cunnilingual servitude. But heartbroken Sandy is about to enter a convent and Darren's fate seems sealed.

It's not fair to discuss the deranged plot of "Saving Silverman" in more detail. Let's just say Wayne and J.D. decide to intervene, which means they spend a lot of time screaming, falling off roofs and wearing chicken costumes. The movie runs out of steam right around the time that J.D. and Wayne end up in jail after kidnapping Judith. But by then it's almost time for the Diamond ex machina appearance of their idol, who comes off as a good sport if not much of an actor. (Then again, how would you do with groan-inducing lines like "I believe in happy endings" or "Hey! We're coming to America"?) Nobly, Diamond agrees to disregard his restraining order against Wayne and J.D. and serve the cause of true love.

You could make numerous arguments against "Saving Silverman," many of them accurate. It's so derivative -- both of "There's Something About Mary" and of the Farrellys' other dude classic, "Dumb and Dumber" -- that it has no business being as hilarious as it is. It's a formulaic mainstream comedy that nibbles bits off the mushroom of hipster culture, mostly in its ironic-iconic use of Diamond (à la Jonathan Richman in "Mary"). I guess it's sexist and misogynist, although it doesn't make men look so hot either. I could definitely have lived without the weight-lifting nuns. Then again, no movie that ends with a triple wedding, one-third of it gay, and a singalong to "Holly Holy" can be regarded as a complete waste of time.