Aggressive diplomatic moves and a conciliatory victory speech encourage some observers. Others just say Arafat got what he deserved. 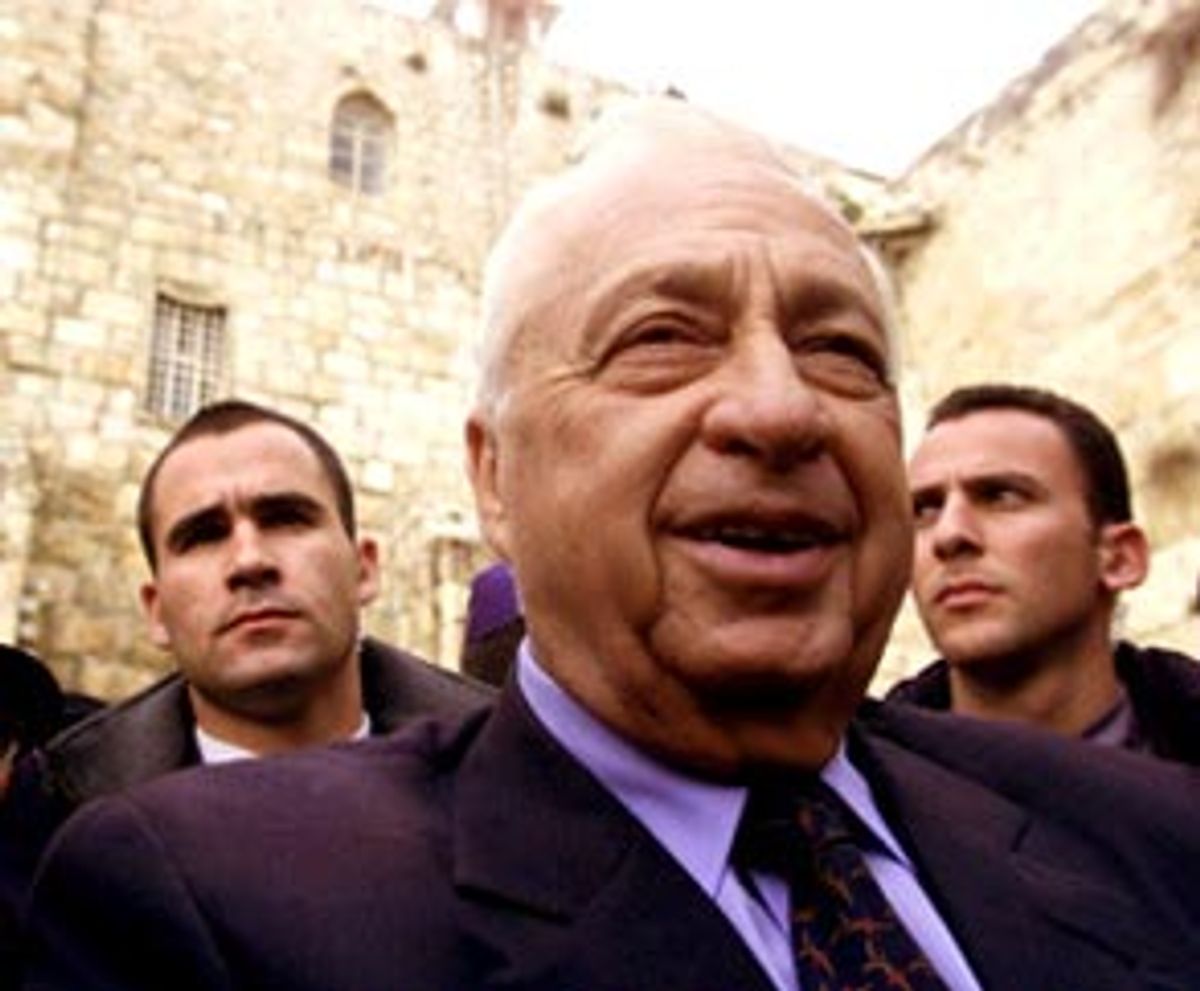 He has been called a war criminal and a warmonger. Some say his election victory spells the end of the Middle East peace process.

But Ariel Sharon became the prime minister of Israel by an overwhelming 25 percent lead on Tuesday, one of the highest margins in the history of Israeli politics. And Sharon has ambitious designs for a broad coalition of parties in Israel's Knesset, one much farther-reaching than the fragile government of his defeated predecessor, Ehud Barak. Like it or not, Sharon is now the man in charge of Israel, and the key to prospects for peace.

After a terrifying four months of intifada that has caused the deaths of roughly 350 Palestinians and 50 Israelis, Israeli voters seem concerned first and foremost with security. And though many, both Arab and Jewish, blame the uprising on Sharon's incendiary visit to the Temple Mount in Jerusalem on Sept. 28, many also believe he is the only Israeli leader firm enough to confront the Palestinian violence and Yasser Arafat.

Sharon has made it clear that he will not give in to Palestinian leader Arafat's claims on Jerusalem, nor will he put as much on the table as Barak did during last summer's Camp David II summit. The erstwhile adventuristic general has enraged Palestinians and moderate Israelis by supporting Jewish settlements in Palestinian territories, a violation of United Nations Resolution 242. He has often made inflammatory statements suggesting that he would support a deal with the Palestinians only under the strictest terms.

But in response to deep concern about his hawkish past and his international reputation as a hard-liner, Sharon has already launched an aggressive campaign of diplomacy. On Thursday, he sent advisors to Jordan and Egypt, the only two Arab nations that have made peace with Israel. A team of Israeli diplomats is also scheduled to visit Washington next week.

According to Sharon advisor Raanan Gissin, the prime minister hopes to reach out to world leaders and media to "alleviate fears, because there has been a demonizing campaign that Sharon will come to power and there will be war."

"As we go along and people see what Sharon is doing, I think that demonized image will dissipate very quickly," Gissin told reporters.

In Washington, President Bush pledged Wednesday to work with Sharon on peace negotiations, saying the United States would "give the Sharon government a chance to do what he said he was going to do."

Arab leaders, meanwhile, have also offered cautious support for cooperation. Egyptian President Hosni Mubarak warned Wednesday against judging Sharon prematurely. "We shall wait and see and not hurriedly judge things," he told Egyptian journalists accompanying him on the return trip from a visit to Kuwait. "We hope that the peace process will resume and move on the right track, although recent remarks by Mr. Sharon are not encouraging," he said.

Mubarak's cooperation is critical, since Egypt is a close U.S. ally and a key mediator in the Middle East peace process. Lebanese Prime Minister Rafik Hariri urged Sharon to abandon his hawkish past, telling reporters that Sharon will find Arabs receptive if he chooses to work for peace "based on international legitimacy and U.N. Security Council resolutions."

"The world has changed ... and we hope that Sharon understands that what was possible in 1982 is no more today," Hariri said.

That pointed statement refers to Israel's invasion of Lebanon, a traumatizing and bloody war that was prosecuted by Sharon himself when he was minister of defense. Painful memories of that event, as well as the massacres at Sabra and Shatila and slayings in the West Bank, are the reason the American Arab Anti-Discrimination Committee released a statement this week calling Sharon a war criminal.

But what about Arafat's role in Middle East violence? Observers here and in Israel point out that an aggressive, military-minded new leader like Sharon might be best-equipped to face a campaign of terrorism that includes random attacks, assaults on reservists and the setting of car bombs, like the one that exploded in a Jewish neighborhood of Jerusalem on Thursday, injuring one person.

In an editorial, the Washington Post called Sharon "Israel's answer to Arafat," noting that Israelis voted for Sharon in large part because they feel "insecure" after months of random violence on civilians -- including the haunting story of a teenager lured to his murder by a Palestinian girl on the Internet.

"How would you have voted under such circumstances?" the Post asks its American readership. It notes the number of peace-seeking leaders who have been assassinated -- King Abdullah of Jordan, Anwar Sadat of Egypt and, more recently, Yitzhak Rabin. "In the Middle East, moderation can kill you."

Ultimately, the Post concludes, Sharon's victory shows that Arafat reaped what he sowed by rejecting Barak's generous offer at Camp David and by not reining in the ensuing wave of violence. The peace process is dead, says the Post, and "Yasser Arafat, to his shame, holds the smoking gun."

An editorial in the Dallas Morning News argues that "the Arab nations shouldn't aggravate matters by making the controversial right-wing politician an excuse for war," and that voters chose hard-line Sharon because Barak's "conciliatory approach" and "unprecedented concessions" failed to achieve peace. "Israelis apparently feel that a stronger hand is needed, that Mr. Sharon could end the second Palestinian intifada and that he would more effectively manage a war with the Palestinians' allies, if war there must be," the paper says.

The Jerusalem Post opines that Sharon's victory speech on Tuesday offered "pleasant surprises to those expecting the worst." Sharon reached out to Israeli Arabs, singled out the importance of relations with the United States (implying that he would not continue "misguided flirtations with Russia" that would hinder diplomacy with the U.S.) and "rejected his own irresponsible economic record."

The Post counsels Sharon not to call the Oslo peace accord "dead" as he did during the campaign, but to "grant that Oslo was a legitimate effort to test Palestinian intentions for peace" -- and that it effectively unmasked "the Palestinians' true positions."

"Rather than fault Barak for taking his experiment to extremes," the Post states, "Sharon should fault him for refusing, even today, to fully accept the results of his experiment: The Palestinians are not ready for peace."

Even the liberal Israeli newspaper Ha'aretz sees much to be optimistic about in Sharon's victory speech. "Ariel Sharon's landslide victory should not necessarily make Israelis dash for their air-raid shelters," writes Yoel Marcus. "He talked about true peace, about painful compromises for both Palestinians and Israelis, and about the opening of a new chapter in Israel's relationship with its Arab citizens," Marcus writes.

"If there is a bright side to the election of former Gen. Ariel Sharon as Israel's new prime minister," an editorial in the Chicago Tribune reads, "it is the notion that only a strong, hawkish leader has the power to embrace his enemy. Just as it was Nixon who opened China, perhaps only someone like the right-wing, war-tested Likud leader can achieve the tough compromises needed for a true peace with Palestinians."