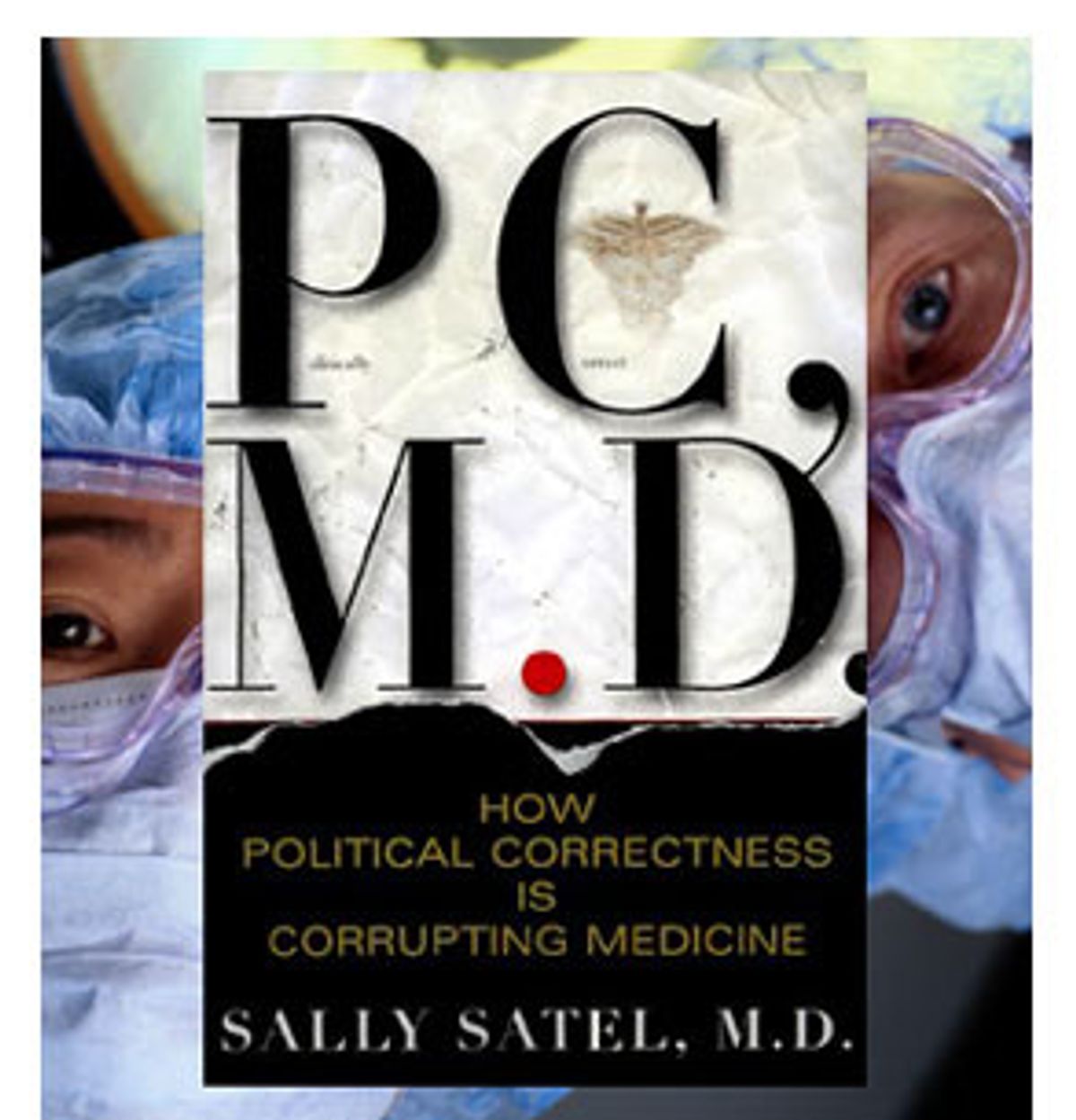 In 1986, Yale surgeon and author Sherwin Nuland was sitting on a bioethics committee that was hearing the case of a heart surgeon who wouldn't operate on a patient with AIDS because he had abused intravenous drugs.

The patient needed a lifesaving procedure to replace one of the badly infected valves in his heart, but the surgeon said he couldn't justify the operation for an intravenous-drug user. He rank-ordered patients with HIV, he said unapologetically: He would operate on hemophiliacs who had contracted the disease through blood transfusions and on gay men who had contracted the disease through sex, but he wouldn't operate on drug abusers who had contracted it through dirty needles. Dumbfounded, Nuland realized at that moment that, for doctors, "the lives that have the most value are those with which we most identify."

Not much has changed in a decade and a half, and a growing number of studies suggest that perceptions, race and gender do have an effect on the care provided to patients. When I show up in an emergency room with my inevitable heart attack, a number of studies suggest that I will have a much better chance of receiving lifesaving therapy than a white woman, a black man or a black woman, in that order, does. Hispanics in Los Angeles and blacks in Atlanta were much less likely than whites to receive pain medication when they came to the emergency room with broken legs, according to other studies. When they leave the hospital, according to a recent study, many minority patients can't find the powerful painkillers they need in their neighborhood pharmacies. The disparities, including those in organ transplantation, go on.

But Sally Satel, a practicing psychiatrist, isn't worried. In her new book, "PC, M.D.," she dismisses these studies and others as seriously flawed outgrowths of a politically correct movement that's taking over medicine and threatening to put patients in danger. Satel is more worried that patients are being discouraged from taking greater responsibility for their health. They're no longer being counseled about improving their diets, taking preventive measures against sexually transmitted diseases or quitting drugs; instead they're being encouraged to accept their status as victims of an unjust healthcare system founded on racism and sexism. By claiming oppression, groups from nurses to former psychiatric patients are overrunning medicine and championing causes -- "therapeutic touch," "multicultural counseling" and affirmative action in medical school admissions, among others -- that are at odds with good patient care. "At best, they create distractions and waste money; at worst, they interfere with effective treatment," Satel writes

To be sure, there are problems with some of the studies that suggest that racism exists in medicine. For example, a study on differences in the treatment of lung cancer between blacks and whites never asked whether black patients, who fared more poorly, showed up at doctors' offices later in the course of the disease. But pointing out flaws like this doesn't make the studies completely invalid. Many studies have flaws; we still base clinical decisions on them. When the sheer mass of studies, each with minor flaws, points in a certain direction, we act on them. When a whole bunch of studies says basically the same thing, we should probably be worried about it.

Most damning to Satel's argument, however, is that she doesn't try to deny that minorities don't have the same access to care that whites do. She just says that the studies fail to prove that these inequalities are due to racism. Unfortunately for her, that's a pretty major concession. Even if we can accept that all Americans don't have equal access to country clubs, most of us believe that we should have equal access to healthcare. The data says we don't, and whether that's a result of conscious racism, institutional racism or no racism at all, it's a reality that decent people want to remedy.

Satel also has a real problem differentiating fringe academics from in-the-trenches doctors, or even mainstream doctors. For example, she dwells at length on Brown University public health professor Sally Zierler, whose theories on HIV seem to eschew practical prevention (i.e., condoms) in favor of victimology (i.e., those who don't use condoms are "seeking sanctuary from racial hatred through sexual connection"). That sounds scary, and it is. But who's listening? No practicing doctors I know, and Satel doesn't provide any evidence for any, either.

If Satel's statistical deconstruction of studies of racism in medicine is convincing to some, she fails completely in her attempts to show that the menace posed by political correctness to medicine is anywhere near as serious as she contends. ("Indoctrinologists," as Satel terms "politically correct practitioners" of medicine, have "infiltrated" respected academic journals. I think the ghost of Sen. Joe McCarthy is smiling.)

In only a few places in the book does Satel bother to provide any quantitative evidence that "political agendas ... are diverting resources from vital clinical tasks" or that political correctness can have "life-or-death consequences." In one, we learn about a $200,000 teaching grant from the Department of Health and Human Services and a $355,000 research grant from the Department of Defense -- both on the subject of a very questionable technique known as therapeutic touch. The technique is crap, as I'll readily acknowledge; Satel points out, correctly, that a 9-year-old was able to debunk it in a study published in the Journal of the American Medical Association. A similar debunking was posted to Medscape General Medicine, an online medical journal, just last month. But with each department's annual budget on the order of hundreds of billions of dollars, I just can't get that exercised about these small grants.

Nor could I get excited about "$40 million in grants [made] available to applicants who wanted to develop trauma programs for women" in 1999, although at least in that case it's a slightly more substantial sum of money when compared with the $2 billion to $3 billion budget of the grant-making federal agency, the Substance Abuse and Mental Health Services Administration. Even if one agrees with Satel that such grants are a bad thing (hardly self-evident, since in addition to the questionable trauma claimed by many, there is real trauma faced by battered women), she doesn't say whether the grants were actually made; they were only "made available," which often means unclaimed.

Satel's backup material is sloppy elsewhere as well. In trying to counter the charge that women aren't included in clinical trials of drugs, rather than find real numbers, Satel simply relies on a professor of psychiatry at Yale and the former head of a Food and Drug Administration division who told her that "women were routinely included" in studies of antidepressants in the 1950s and 1960s. No counts. No data. She lists the percentages of women overall in government-sponsored trials, but the important question is how much of medicine being practiced on women today is based on trials performed on men years ago -- and she doesn't address that.

Satel's lack of attention to total costs -- and to real analysis of data like the number of women in trials -- is unacceptable in any sort of rigorous argument. Search high and low for evidence of a larger trend, and all you'll find is Satel suggesting that "the anecdotal cases I have uncovered are probably the tip of the iceberg." Simply attacking what Satel considers common-sense health programs can get you painted with the same politically correct brush as the true wackos. In Charleston, S.C., in 1989, police and health officials created a harsh policy that basically equated drug use during pregnancy with child neglect or delivery of drugs to a minor. Of course, the ACLU and other groups were up in arms. Satel launches a tirade against those who opposed the policy, seeming to forget that putting pregnant women in jail is a pretty horrible idea, and that the basis of the policy -- that a fetus is a minor -- violates Roe vs. Wade.

When Satel decries affirmative action in medical school admissions, she sounds a typical conservative alarm filled with tautologies presented as stunning conclusions. For example, because of fewer opportunities at the high school and college level, minority students admitted to medical school are less prepared for the curriculum, so they do relatively poorly in their courses (and some fail and have to drop out). Then, of course, they do poorly on medical board exams. None of these revelations seems particularly earthshaking, and dwelling on them ignores the intangibles that are probably equally as important as grades in being a doctor -- intangibles that Satel spends just a page and a half on. And she offers without comment the idea that women are not rising more quickly through academic medical ranks because they're taking time off to raise families. It's 2001. Most reasonable people agree that husbands can and do now shoulder some of that burden.

The thought control Satel is trying to promote seems more dangerous than the wacky ideas of a few public health school faculty members. Satel is trying to wrest control of medicine back from patients, whom she sees as ignoramuses who can't possibly know what's good for them. Big, paternalistic government is bad, according to conservatives, but paternalistic medicine is evidently good, according to Satel, who doesn't seem troubled by the contradiction between diminishing patient autonomy and encouraging patients to take responsibility for their own healthcare. She's arguing for a remarkable sort of paternalism.

This all fits in nicely with managed care's plans for the world: Cut down the amount of time doctors can spend with patients, who will then run to the Internet for medical advice. But there they're more likely to find charlatans and snake-oil salesmen than reasonable medical opinions. Managed care, which presents more clear and present danger to the public's health than anything denounced in Satel's book, is barely mentioned. When it is, it's praised for cutting down lengths of stay in long-term mental hospitals and defended against charges that minorities aren't well represented in physician rosters. Similarly, Satel ignores the influence of politics on the medical arena when she agrees with certain policies, such as those against abortion.

Satel's thesis would be less troubling if she presented a clear vision of how to equalize the inequities in healthcare, which she acknowledges, even though she doesn't think they're the result of sexism or racism. She seems at one point to encourage "cultural competency" -- defined by the American Medical Association as familiarity with the "beliefs, values, actions, customs, and unique health needs of distinct population groups" -- although this itself is a politically laden term and her message is muddled.

Satel approvingly cites Anne Fadiman's "The Spirit Catches You and You Fall Down," the well-received 1997 book about the cultural clash that resulted when the immigrant parents of a young Hmong girl with severe epilepsy resisted American doctors' attempts to treat her. "In this account there are no villains," Satel writes. That's what the reviews all said, but has Satel actually read the book? While I agree that the book is a more balanced and powerful account of such a story than can be found elsewhere, I finished reading it with the distinct impression that the doctors were the villains, even if well intentioned. (That impression was only bolstered by hearing Fadiman at a recent conference refer to the girl's persistent vegetative state as being the fault of a medical mistake.)

Satel is a conservative ideologue in a doctor's white lab coat. Unfortunately, her voice is likely to carry a lot of weight among those who will be setting health policy in the Bush administration. Even Satel agrees that there is a problem in the delivery of healthcare to minorities. Rather than lambasting those who are trying to identify the source of the problem, conservatives should join liberals in trying to figure out how to solve it.