The cosmetic industrial complex flogs creams, tonics and scrubs for the blemishes on our souls. 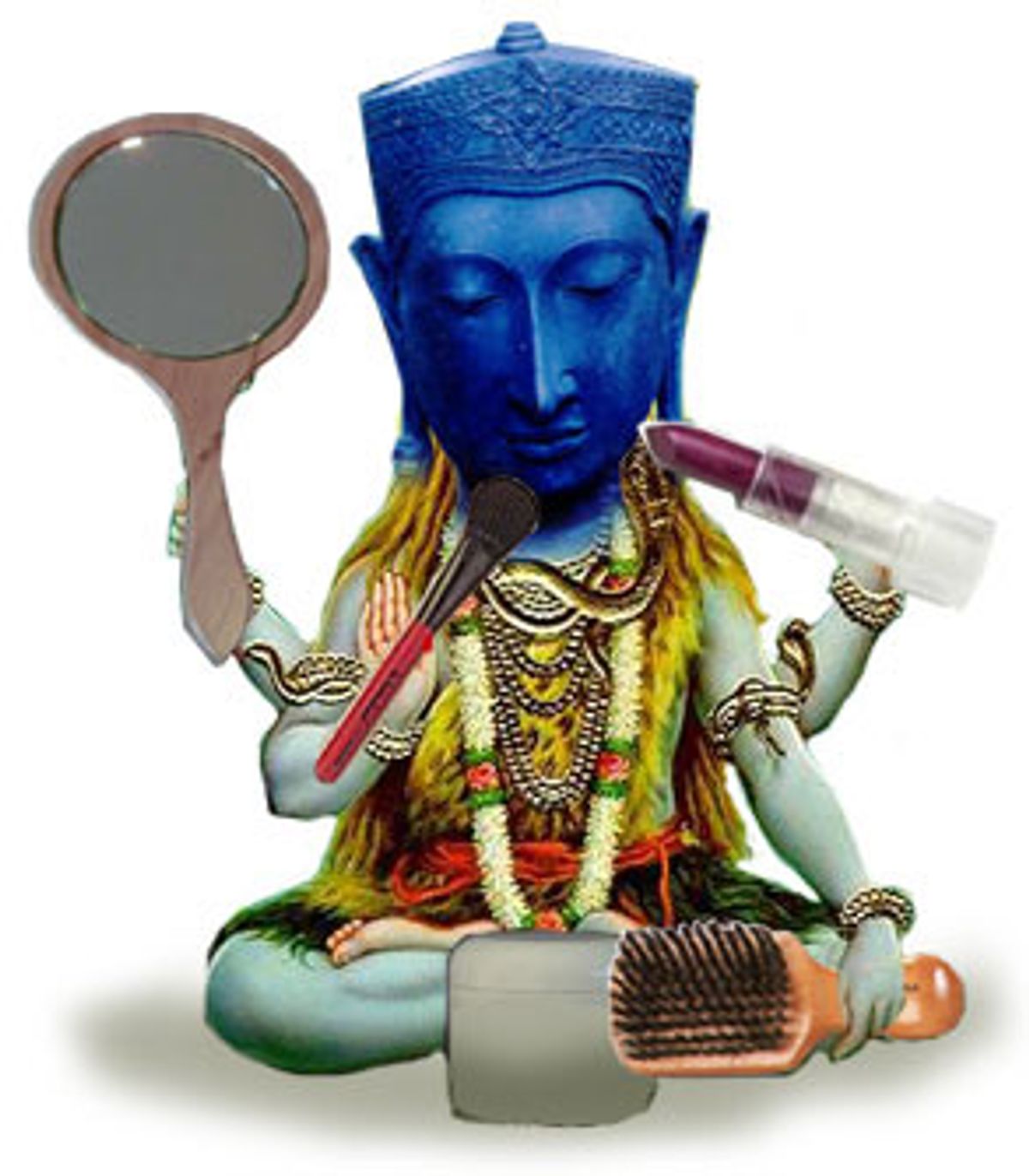 These days, when Americans hear the word "spirituality," they reach for their credit cards.

It makes perfect sense, in an oblique way, since consumption has always been about the promise of transcendence, leaving convenient, shopping bag-shaped holes in the soul. So it's no wonder cosmetics companies have found religion: In this era of divine convenience, it was only a matter of time before spiritual healing was available in a bottle. Creamy slathering, one step closer, my higher power of the universe, to thee.

In 1970, New Yorker fashion writer Kennedy Fraser wrote, "Sex is no longer used to sell makeup ... Most cosmetic advertisers now appeal to narcissistic instincts." Thirty years later, our narcissistic instincts have annexed parts of the self previously left to zealots and ascetics. We don't want to buy skin care products just for their scientific properties anymore (that would be superficial); we buy them for their promises of purity, clarity and transcendence. We want their beneficial qualities to penetrate much deeper than the skin. We want to be pretty on the inside.

Skin care ads have always used images of magical age-fighting pellets slipping effortlessly through the skin like pebbles into lakes. And doctors have just as long pointed out that if the skin were permeable, we'd drown in the tub. New high-end cosmetics lines marketed to younger women avoid scientific squabbles altogether by going much deeper and way farther out. Higher forces are being marshaled to minister to our moisturizing needs. We, in turn, are having emotional responses to unguents. Purity, peace and love have replaced the more mundane qualities of sex appeal, mystery and desirability as the new cosmetic value-adds, and cosmetics companies have become foremost purveyors of over-the-counter inner life.

The mother of the holistic cosmetics movement is Dr. Hauschka, a 30-year-old holistic cosmetics company that wants to "help the skin help itself." Dr. Hauschka produces plant-based cosmetics that are free of artificial colors and synthetic scents. Raw ingredients are grown organically, "bio-dynamically" and very, very strictly outside Stuttgart, Germany. Sown and harvested to follow "the natural rhythms of the cosmos" according to an agricultural method advanced by philosopher Dr. Rudolf Steiner, the verdure is planted under certain constellations and hand-plucked at whatever time of day its "life force" is at its strongest. Only nonsmoking, non-synthetically fragranced, non-nail polish wearing harvesters -- who must be thinking happy thoughts and refrain from stressed-out plucking -- may handle the botanicals.

"You have to be really centered," a company representative tells me. "If the person who is supposed to be harvesting is unhappy for whatever reason, they probably won't perform their duties that day." Dr. Hauschka's products are known as the "Birkenstocks" of skin care, and frankly, they make me feel rather soiled and in want of further toxins.

Astara Skincare proudly declares itself to be "conscious skin care," though the fine silt scrub I purchased recently shows no signs of being in the least bit cognizant of its gentle exfoliating action or even medially aware of its natural antiseptic properties. The deep blue bottle with the groovy symbol suggests beneficial vibes and ethereal states of being. Plus, the marketing solecism adds a touch of New Age flakiness that is oddly reassuring to one whose skin tends toward the same. The scrub is one in a line of products offered by a Telluride, Colo.-based company founded by a motivational speaker who follows an Indian guru; a formerly famous model; and two reclusive desert-dwelling scientists who were once Nobel Prize candidates -- just the sort of holistic mad scientists to back up Astara's far-out claims.

Astara "supports a concept of wholeness of well-being in body, mind and spirit, and upholds the principles of love and harmony for all humanity and our earth," its Web site declares. This, of course, is in addition to the "dynamic life-force energy radiation" that's packed into every bottle. Think they're making it up? They have the photos to prove it.

For those who would rather not think of Shirley MacLaine in the bathtub, there's the far groovier but just as cosmic Tony & Tina, whose co-founders Tony Gill and Christina Bornstein see their product line as "a conceptual art project" that manipulates "the way electromagnetic vibrations of color, aroma and sound affect the human energy system" by "aligning our energy centers and cleansing our body and mind, allowing our energy system to function and grow to its fullest potential."

The company offers a full line of cosmetics, skin care and the beyond. When you buy a little pot of Cosmic Lights, for instance, you're not just buying glitter, you're getting Alpha State, a "white/gold-pink iridescence" that "turns dreams into reality." Another color tells the universe you are open to its expansiveness. Yet another aids travel to other dimensions. And still another promotes communication with higher beings.

Do the higher beings call you? Do you call them? Who pays for the call? Discovering these things is all part of the journey.

It's obvious why, in the "advertising made me do it" theory of consumerism, beauty products have always gotten a bad rap. But cosmetics have always dealt in fantasy, and our current collective fantasy involves flying away in a spaceship to a less stressed-out place where the vegetables are organic.

As my friend Keva Marie, a creative consultant for the fashion, beauty and youth industries, says, "People are tired of this Prozac world, and they are intrigued about things that have to do with their selves, with their personalities. When there's an emotional drive to buy beauty products, it creates a justification to spend more money."