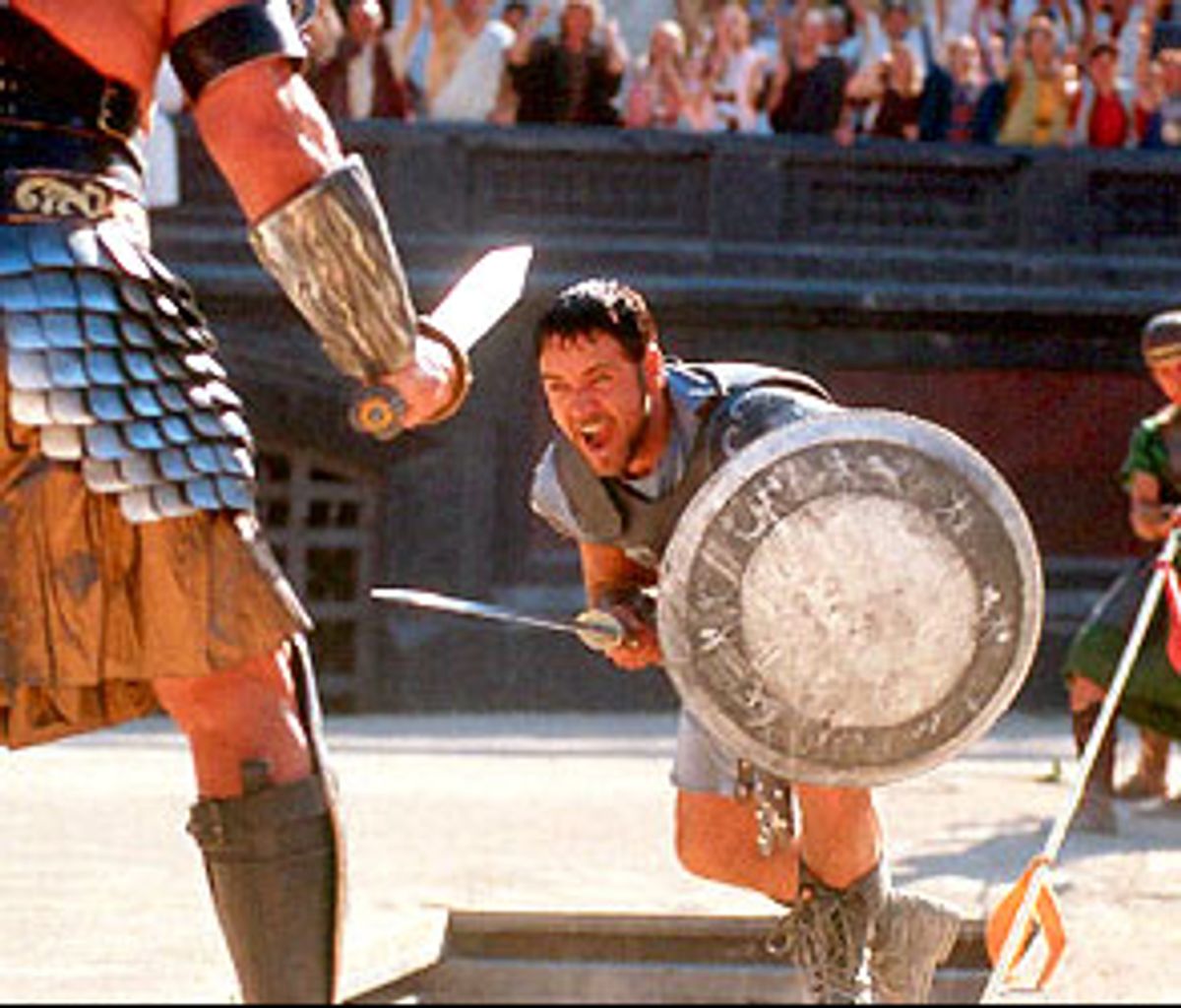 Even if Ridley Scott's "Gladiator," a sword-and-sandal exercise in a genre as dead as the Roman Empire itself, looks poised to sweep many of the major Academy Awards categories on March 25, there are some intriguing subplots under the toga.

Hong Kong's action-packed, melodramatic cinema has had a cult following among North American film fans for 15 years or more, and has already exported directors like John Woo ("Mission: Impossible 2") and stars like Jet Li ("Romeo Must Die") to Hollywood. After the 10 Oscar nominations gathered by Ang Lee's enthralling martial-arts epic "Crouching Tiger, Hidden Dragon," already the biggest-grossing foreign-language film of all time, it's safe to say the secret's out. (Hong Kong's studios, with a two-decade backlog of action movies to peddle to suddenly curious Americans, must be drooling.)

Then there's the remarkable tale of Steven Soderbergh, who received best picture and best director nods for both of his 2000 films, "Erin Brockovich" and "Traffic." (Besides those two films, "Crouching Tiger" and "Gladiator," the other best picture nominee is Lasse Hallström's Euro-lite food 'n' love comedy "Chocolat.")

So many fans and journalists have been scrambling to dig up a precedent for Soderbergh's extraordinary double-double that the official Academy Awards database had crashed by 10 a.m. EST on Tuesday. (There isn't one, though directors Michael Curtiz and Clarence Brown pulled off double director nods in the first years of the awards. Francis Ford Coppola got dual best picture and screenplay nominations for "The Conversation" and The Godfather Part II" in 1974, besides a director nomination for the latter.)

Many movie fans will recall that Soderbergh debuted as a 26-year-old whiz kid with "Sex, Lies and Videotape" in 1989, and broke into the mainstream by directing George Clooney and Jennifer Lopez in the 1998 hit "Out of Sight." But who, besides Soderbergh and his family, remembers the years in between? No one seemed a less likely candidate to become the hottest filmmaker in the world, embraced by critics, the public and the Hollywood establishment alike.

Sure, Soderbergh always had a cadre of loyal followers, but after the sci-fi puzzler "Kafka" (1991), the Depression drama "King of the Hill" (1993) and the neo-noir "Underneath" (1995) it had gotten pretty small; he had lost his patina of arthouse hipness, yet gained no traction with mainstream audiences. Five years ago, when his no-budget pet project "Schizopolis" (starring himself) barely found distribution, Soderbergh seemed like a noble indie artist riding into the sunset of his own artistic vision.

If Soderbergh and Lee feel justifiably honored and humbled by today's nominations, Cameron Crowe may be throwing crockery around the house. His autobiographical '70s rock 'n' roll epic "Almost Famous" was one of the best-reviewed movies of the year, but it ended up costing DreamWorks a small fortune -- and Hollywood was quick to whisper that the one-time wunderkind had gotten too big for his budgetary britches. The film was shut out of the academy's major categories: Crowe was nominated only for his original screenplay, and Kate Hudson and Frances McDormand were both nominated for best supporting actress, virtually ensuring that neither will win. (Major snubs were also dealt out to Curtis Hanson's "Wonder Boys," which got mentioned only in the editing, screenplay and song categories, and Kevin Costner's "Thirteen Days.")

Lars von Trier's odd and memorable musical "Dancer in the Dark," which sharply divided critics and audiences, was also ignored, but that shouldn't surprise anybody. I found "Dancer" a work of dark genius -- and Björk's performance in the lead role astonishing -- but it just isn't the kind of thing Oscar voters like. Beyond those two films, there's little controversy of the sort that attended last year's nominations, when Jim Carrey, Matt Damon, Tom Hanks, Ralph Fiennes, Gwyneth Paltrow and several highly regarded films were all excluded. "The Perfect Storm," for example, was one of 2000's biggest hits, but despite the presence of Clooney and Mark Wahlberg, no one in Hollywood seemed to view it as an Oscar-level prestige film.

Lee and Soderbergh will be the belles of the ball at this year's Oscars, but their role on March 25 will mostly consist of beaming graciously at the stage of the Shrine Auditorium while other folks haul away the hardware. Soderbergh's four nominations will most likely translate to zero statuettes -- although both his films could conceivably win writing awards -- and Lee's best chance is probably in the best foreign film category.

Perhaps 1999 was not quite the breakthrough year in movies some proclaimed it to be, and 2000 in turn wasn't quite as terrible as some critics (including me) decreed in December. Still, the sense of downturn and contraction is palpable, in the movie industry as everywhere else in American life, and I'm guessing Academy members will be grateful to fold their leathery arms around a big schmaltzy hunk of old-fashioned spectacle. That's a roundabout way of saying that "Gladiator" is likely to win everything in sight: best picture and best director, along with best actor for Russell Crowe (who really deserved it last year for "The Insider") and an array of technical awards.

Crowe's major competition is surely perennial industry favorite Tom Hanks, for his remarkable conversations-with-a-volleyball turn in "Cast Away." (And it might help that the extravagantly reviewed film was otherwise virtually ignored.) But the handsome Aussie is both a fine actor and the hottest male sex symbol in the business, and I suspect a plurality of the voters will feel it's his turn. Javier Bardem ("Before Night Falls"), Ed Harris ("Pollock") and previous winner Geoffrey Rush ("Quills") will be honored to bestow brotherly hugs on Crowe at the backstage party.

Julia Roberts probably cleared a spot on the mantelpiece for her best actress statuette as soon as she saw a work print of "Erin Brockovich." Here we have a major star in a succession of skimpy outfits giving a terrific performance in a crowd-pleasing film with a social conscience. Besides, it's a way for the Academy to give an award to one of Soderbergh's movies without actually giving it to him. I'd love to believe that Laura Linney has a shot for the likable small-town drama "You Can Count on Me," but the only plausible alternative to Roberts might be sentimental fave Ellen Burstyn (who took home a best actress Oscar in 1974 for "Alice Doesn't Live Here Anymore"), for her brave work in the daring but overwrought "Requiem for a Dream." (Joan Allen in "The Contender" and Juliette Binoche in "Chocolat" are the other nominees.)

Although the supporting actor and actress categories usually provide at least some mild surprises, they offer pretty safe fare this time around. Benicio Del Toro's turn as a sad-eyed Tijuana cop might provide Soderbergh's drug-war drama "Traffic" with its best chance for an award, but you can't rule out beloved industry vet Albert Finney in "Erin Brockovich" or Joaquin Phoenix as the lisping, incestuous emperor of "Gladiator." (Willem Dafoe was entertaining as a silent-movie bloodsucker in "Shadow of the Vampire," but it's doubtful that enough academy members will sit through that tedious in-joke of a film to turn Dafoe's nomination into a statue.) English theater goddess Judi Dench ("Chocolat") has perfect upscale credentials and looks like a shoo-in for another best supporting actress Oscar (she won two years ago for her few minutes of screen time in "Shakespeare in Love"), but the wonderful Marcia Gay Harden might provide voters with a way to honor "Pollock," an earnest, high-integrity film few have bothered to see.

No Oscar story is complete without a gratuitous reference to Jim Carrey, who once again was nominated for nothing, although this time it would have been shocking if he had. (Even if "The Grinch" was the top-grossing film in the U.S. last year.) We have three words of friendly advice for you, Jim: Call Steven Soderbergh.