Do you love me, or am I just paranoid?

Consider, if you will, how romance is like a marauding bear, but also not. 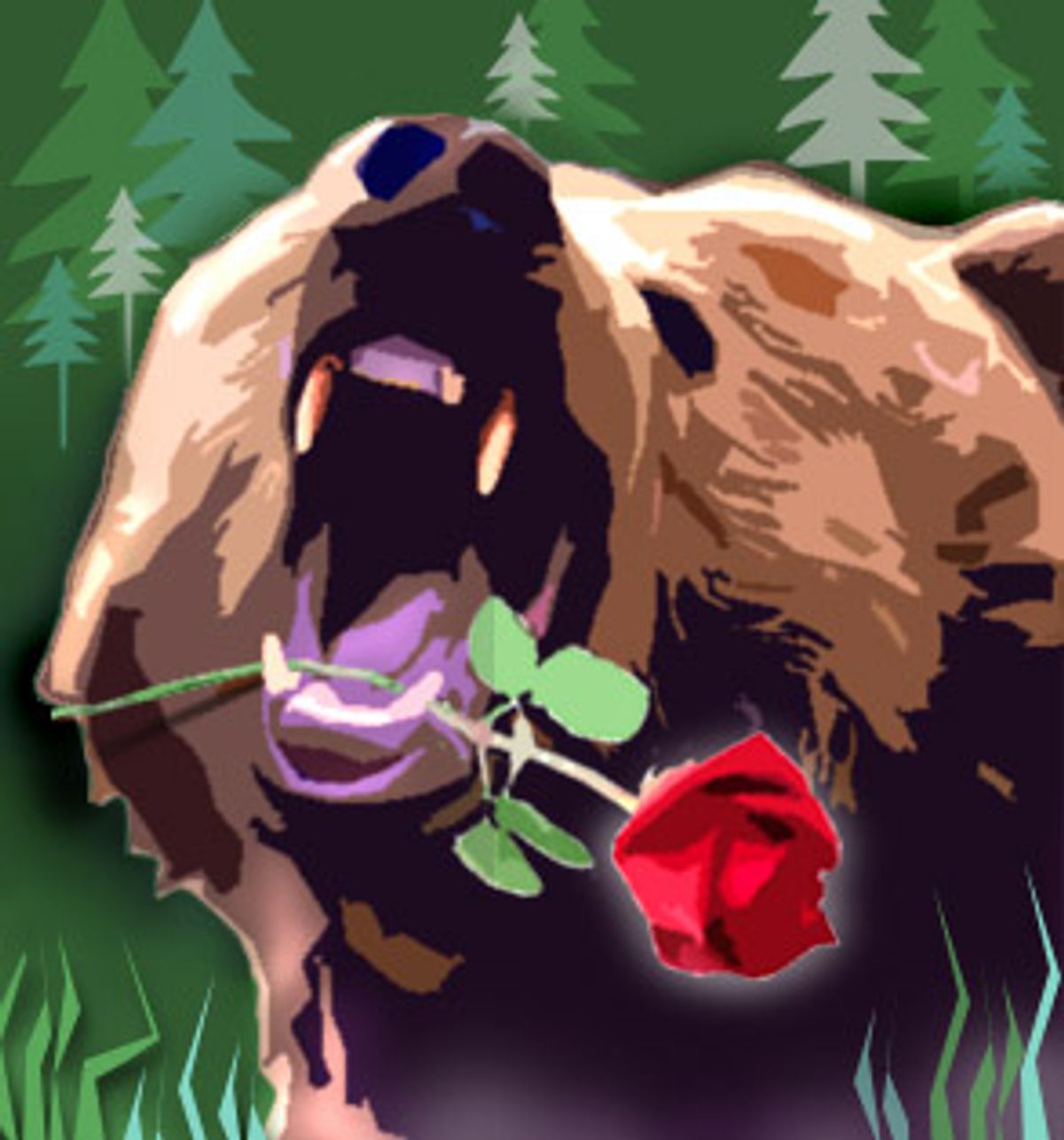 You're considering embarking on a new romantic adventure; or you have already taken a few wobbly, careless steps in that direction. Suddenly, you are seized by fear. Fear is a natural, self-preserving instinct, useful in helping people escape from marauding bears. But there are times when fear is irrational, unwarranted, the product of an overripe imagination. Are you justifiably cautious, or are you just paranoid?

"The Mayo Clinic Family Health Book" defines paranoid personality disorder as a condition that causes the subject to be suspicious and overly sensitive to perceived injuries, slights and tricks by others. "Dorland's Pocket Medical Dictionary" calls it a psychotic condition marked by well-systematized, logically consistent delusions. These definitions assume that the paranoid subject is mentally ill and, therefore, that the danger is imagined. They also inadvertently describe the love condition, which, whether the subject is mentally ill or not, is cause for concern.

Is fear of love the result of a state of mental derangement? Is it an instinctive response to perceived danger? Or could the construct of romantic love itself be a sinister government conspiracy designed to subjugate and control a weakened, addled populace?

In short, fear of love, unlike fear of marauding bears, is chronic, comprehensive and cumulative. Fear of bears does not necessarily take into consideration past experiences with other bears, friends' and parents' experiences with bears or examples of bear-human connections in literature.

Conversely, in fear of love, these experiences tend to curdle over time, forming an emotional bolus that obstructs instinct and favors instead highly sophisticated and evasive modes of thought. Questions of motivation, sincerity and intent are usually considered. Again, this is not usually the case when one is being attacked by a marauding bear. It is the rare person who asks himself if the bear intends to stick around after it is finished marauding. It is the rarer person still who wonders whether the bear is just messing with her (and really has no intention of marauding at all).

Love paranoia also subjects one's own mental health to intense self-scrutiny. Fear of love is a doubting fear; it's a fear that doesn't even trust itself. If a person were being attacked by a marauding bear, he would probably not wonder whether he was insane for even entertaining the possibility of a meaningful relationship with the bear. She would not worry that by automatically running away from the bear, she might be robbing herself of one of life's richest experiences. She would be confident in her decision to flee the bear, as the bear's intent, clearly, was to maraud.

Of course, the bear-love comparison takes us only so far. As a nonrational being, a bear is unlikely to lure victims with promises of exotic voyages abroad or baskets of fancy fruit. The bear, straightforward by nature, makes no promises it knows it cannot keep, and is unlikely to attempt to disguise its intent to maraud as anything other than what it is. Therefore, there is considerably less opportunity for confusion when one is being attacked by a marauding bear than there is when one is being pursued by a potential mate.

Now that we have established that fear of love goes beyond the boundaries of mere instinctual responses to imminent danger, let's consider its manifestations.

Abuse of alcohol and other drugs
Withdrawal from friends and family
Loss of interest in daily activities
Inability to concentrate
Glazed or faraway stare
Decline in academic, athletic or job performance
Inappropriate dressing for weather or occasion

Abuse of alcohol and other drugs
Withdrawal from friends and family
Loss of interest in daily activities
Inability to concentrate
Glazed or faraway stare
Decline in academic, athletic or job performance
Inappropriate dressing for weather or occasion

Extreme or unusual sensitivity to light, colors and/or noise
Believing one's thoughts are controlled by others
Fear of being touched by others
Changed sense of self (believing body parts are diseased, detached, hanging, etc.)
Sense of body boundaries deteriorating

Extreme or unusual sensitivity to looks, remarks and/or absence of phone calls
Believing one's feelings are controlled by others
Fear of not being touched by others
Changed sense of self (believing body parts are perfect, gorgeous, truly magnificent)
Sense of body boundaries deteriorating