I covered Disney's new theme park, California Adventure. It made me miss the Golden State. 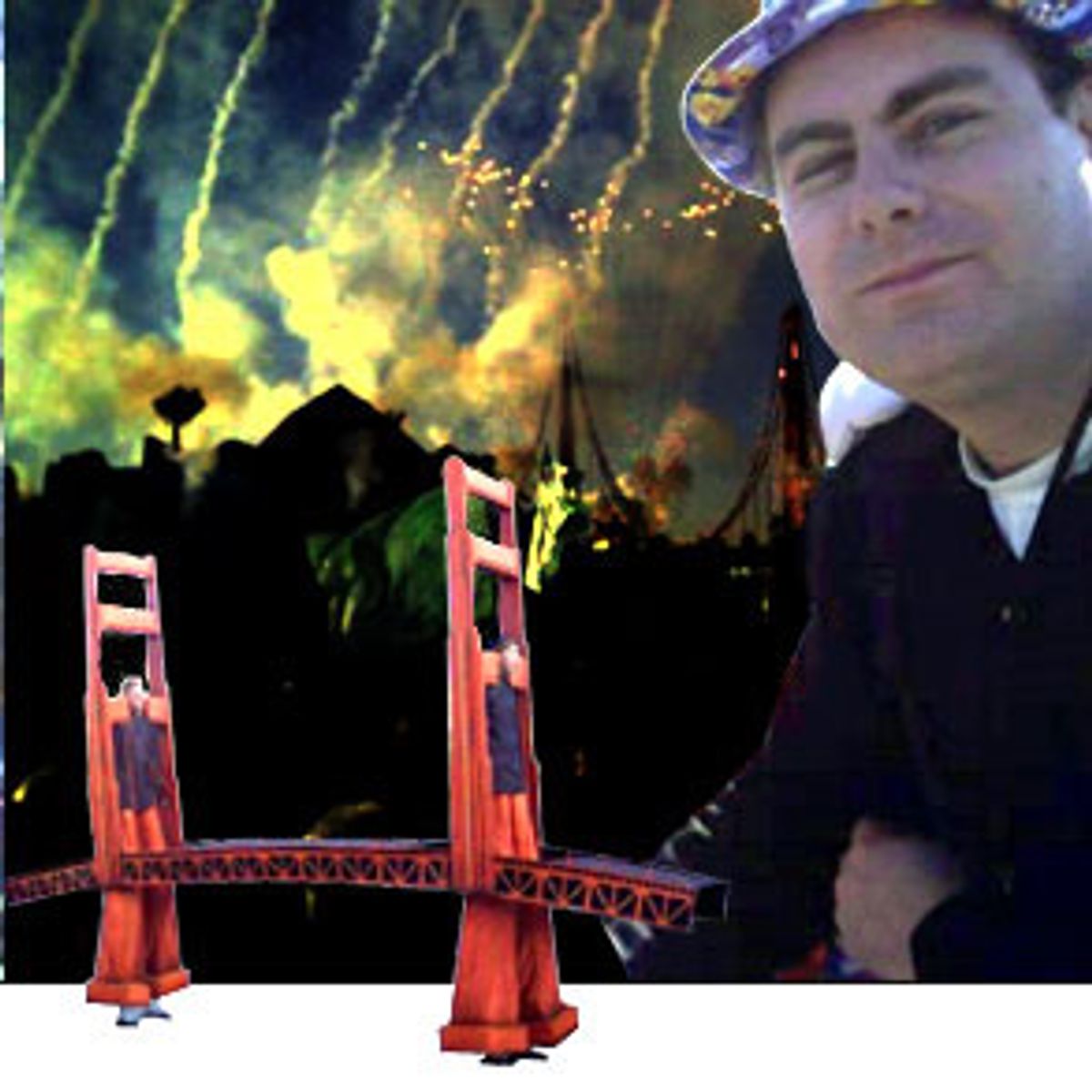 It's hard for anyone to live in Southern California and not be touched by the shadow of Disney. Half the struggling screenwriters I know are temps or work full-time in various Disney offices. I recently ran across an old friend who had been working in animation for Disney. She was assigned to the latest Dalmatian movie: Since the lead dog was supposed to be a female, her job was to spend the whole day digitally erasing its male genitalia.

For the last few months, I'd been hearing whispers from my friends about Disney's latest theme park, California Adventure. For two years, it was this gigantic hole in the ground -- a view from the monorail didn't give much more information. It seemed big, but not really that big.

Then I was invited to cover the opening of California Adventure, to get to the bottom of the hole, as it were.

The first thing I found out was where I fit in on the food chain of journalists. (No, I couldn't bring a guest, I'd have to come alone. Yes, I would be invited to the premiere of the latest Muppets 3-D movie, but no, I could not attend the Wolfgang Puck party.) I was invited to attend the Media Day and the park's grand opening.

Mostly I was concerned about having to go alone. I'd seen people alone at theme parks and they always seemed a little bit sad. They often turned around and tried to befriend the people standing in line with them. They showed off their Disney pins and talked about the long conversation they had with Roger Rabbit. I didn't want to be one of them.

Then it turned out that I wasn't going to be alone. I was going to have my own media host. This seemed like a fun idea. But then another fear crept into my head. What if I didn't like my media host? I'd have to spend the entire day with them. After about an hour or so, like a blind date that wasn't working out, could I say something? ("You know, this isn't about you ...")

I started thinking about the kind of media host I'd want. Someone upbeat, but not too upbeat. Someone who wouldn't resent having to spend the entire day in the park with me. Someone who had stories, but not too many. Someone who liked Ben Folds Five and the films of Pedro Almodóvar, and long walks on the beach would be nice too.

When the day of the media event finally came, I met my media host, a vivacious woman named Wendy Johnson. She admitted that this was her first time as a media host and I admitted that this was the first time I'd had a media host. Wendy then helped get me through crowds and catered to my every selfish whim. (Want me to go get you a fruit smoothie while you're at that press conference?) She even brought some rain ponchos from home for us both to wear during the water-raft ride. It occurred to me that this is a woman who should be protecting the president, not schlepping fruit smoothies around for a lowly writer such as myself.

Our first stop was the dedication of the new "Soaring Over California" ride. It was pure Disney, part moving, part schmaltzy -- several youthful actors in jumpsuits pointed to the skies and talked about man's dream of flight. (I heard the word "dream" first at 8 a.m. I heard it a hundred times during the day, until the word and all its derivatives were charred to a meaningless nub.)

We sampled the ride, which, I learned, was Wendy's favorite. You're brought into a huge, dimly lit room that has rows of seats facing an enormous movie screen. Once the ride starts, the chairs lift up and bring you right up to the screen and within seconds you are "flying" over California. You fly over golf courses, freeways and snow-laden mountaintops. When you fly over a forest, you smell pine trees. When you fly over orange groves, you get a whiff of oranges.

It's one of the few amusement park attractions I've been on with a score from a renowned film composer (Jerry Goldsmith). I too loved the ride but ended up wishing that the smells were a little less reminiscent of those aromatic Christmas trees that hang on taxicab mirrors. Also, if you sit in the back row, your view over California includes the sight of tennis shoes hovering over your head.

Afterward Wendy gave me a walking tour of the park, which is divided into three different themes -- Golden State, Hollywood Pictures Backlot and Paradise Pier. In Golden there's a tour of how tortillas are made, but you don't get to eat any, and also a tour of how sourdough is made, hosted on a video screen by Rosie O'Donnell, but still no samples. Paradise Pier is designed in the style of the Pike in Long Beach and has all the trappings of a typical amusement park; Hollywood Pictures Backlot needs no introduction.

At the dedication of the Soap Opera Bistro, populated by a dozen soap opera actors, I witnessed the presentation of Luke and Laura's engagement rings and saw the dining rooms fashioned after a room from each of the ABC soaps ("General Hospital," "One Life to Live," "Port Charles" and "All My Children"). The restaurant is nice, but I was unprepared for how fake and how beautiful the soap actors were. I even got to overhear one say on her cellphone: "I don't care if that's all that's available, I will not fly business."

As Wendy and I wandered around, I realized that California Adventure isn't just aimed at kids. In fact, the more I looked around, the more I was convinced that it might be better suited for their parents. This thought was reinforced as we visited the Robert Mondavi wine vineyard. There are actual wine tastings, food demonstrations (I saw a chief sauté four types of olives in a pan of oil, garlic and orange zest), and two upscale restaurants. One of the restaurants in fact hosts a full, two-hour, four-course dinner.

There are some things you'd never expect to find inside a Disney theme park -- pappardelle with red wine braised duck is one of them. Or monkfish Grenoblaise. Another thing I never expected to see was alcohol. Lots of alcohol. I asked Wendy about this and she said that employees have been given classes on how to deal with drunken guests. She says that she's not worried. Maybe not, but I am. A guy with mouse ears brandishing a hot churro is one thing; a really, really drunk guy wearing mouse ears is another.

After lunch we attended a press conference. Someone said that the idea behind the expansion was to develop Disneyland into a full-scale vacation resort. Apparently the average tourist spends seven days in California and just one of those days at Disneyland. They want the guests to stay at Disneyland three, or even four days out of their vacation.

Wendy and I sampled a lot of rides. Some were terrific (like the "A Bug's Life" 3-D movie and the impressive California Screaming Rollercoaster) and some were less so. But no ride in any Disney park has ever been stranger than Superstar Limo. I had to go on the ride again the next day just to make sure it was real.

The concept of the ride is that you are Hollywood's latest sensation and you are just arriving at LAX to go to the premiere of your first movie. You go through the terminal, noticing posters for things like the Awards Network (all the awards, all the time). A Disneyland employee greets you ("Hello superstar, are you ready for your limo?"), and off you go inside a purple limo, complete with a video cellphone.

On the way to your Hollywood premiere you are greeted by "It's a Small World"-like animatronic characters such as Regis Philbin threatening you with a fistful of money, Cindy Crawford trying to spray you with perfume, Antonio Banderas and Melanie Griffith (apparently out of rehab and looking terrif), Jackie Chan, Drew Carey and Whoopi Goldberg. A gaggle of cardboard fans flash cameras in your face and as you exit the ride you get to see a TV image of yourself, in your limo, arriving for your premiere.

The next day I embarked with a friend on an unguided tour of the park. It was hard to say goodbye to Wendy Johnson. She had been such a terrific media host. We exchanged e-mail addresses (the 21st century's true bear hug).

It was opening day and expectations were high -- but the crowds didn't show. Nobody could believe it. We picked up all kinds of Disney information from the employees, who were shocked to find they had all the time in the world to be attentive. (Did you know that Roy and Walt Disney's initials are all over Disneyland? Did you know that there are hidden Mickeys in every single attraction? Did you ever notice that you never see park employees point a single finger while giving directions? In some cultures it's considered rude so we're trained to point with two or three fingers. At first it's kind of unnatural, but then you get the hang of it.)

We took in Disney's Eureka Parade, an event that eschews all the familiar Disney characters and focuses on some goddess named Eureka, who represents the spirit of diversity in California. Each culture (or I should say several cultures) is depicted in a series of floats. There is a Watts Tower float and there is a Latino festival of the birds. My personal favorite was the depiction of the Asian community, including a woman dancing in a fortune cookie costume. San Francisco is referenced by two men in stilts walking together as the Golden Gate Bridge.

Then we went to see a movie called "Golden Dreams," hosted by Whoopi Goldberg. This marked her second appearance in the park, almost enough to make me go out in search of all the hidden Whoopis that I might have missed. In "Golden Dreams," Goldberg portrays the mythical Queen Califia, the Goddess of California. (Yes, the park is a little goddess-heavy.) She appears at dramatic moments throughout California's history, offering immigrants and dreamers encouragement to continue on. In a dramatic montage we see other stirring moments in the history of the Golden State. The montage includes Harvey Milk and a crowd of AIDS activists, and even a second protest of Women With AIDS. The images only last a split second but still, it's one of the most memorable split seconds inside any of the Disney parks.

Post-junket, my biggest worry is that Michael Eisner may get his way and tourists will spend three or four days out of their weeklong vacations at Disneyland. The park is neat but to miss out on the real Yosemite or the real Golden Gate Bridge, to miss Hearst Castle or Santa Barbara, to not drive past real orange groves and smell real oranges -- to miss out on the real E-ticket California stuff, that would be a damn shame.

David Vernon is a writer of fiction and screenplays. He's currently finishing his first novel, a fictionalized version of his experiences growing up as the son of a comedian.