Abs of steel and a thing for girls with an appetite -- Freddie Prinze Jr. is the guy everyone wants for a boyfriend. 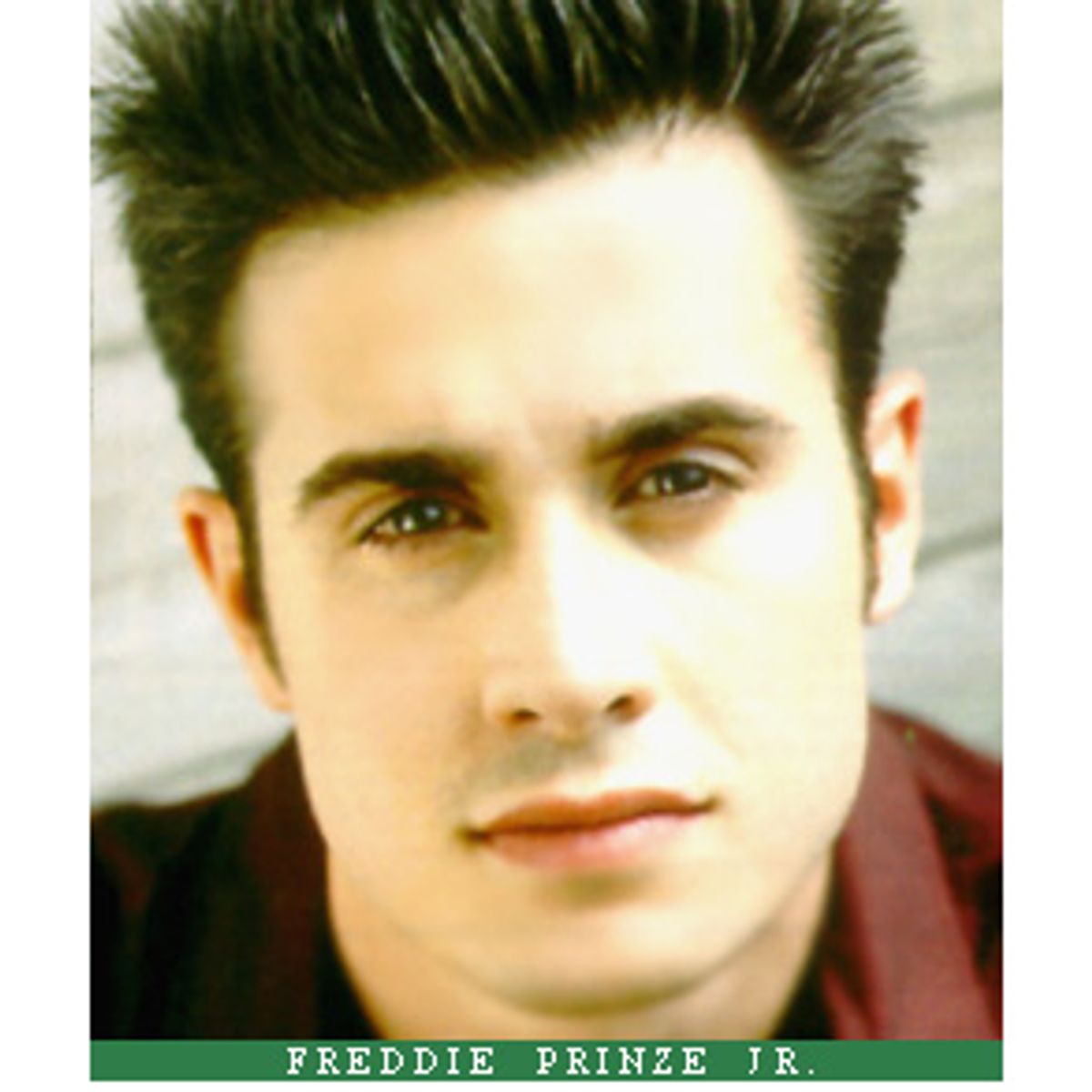 It isn't that he's handsome, although People magazine did name him one of the most beautiful individuals in the world. Twice. It isn't the pedigree, though he shares a name with a late, famous comic. It isn't the Latino thing, since he's never indicated he even knows what a vida loca is. And it sure as hell isn't the movies themselves, which mostly stink on ice.

So how did Freddie Prinze Jr. become a bona fide Hollywood heavyweight, a seven-figure-salaried member of the hunk pack? The secret is beyond mere looks or breeding. It's the ability to appeal, almost literally, to the public appetite.

There are movie stars whom audiences dream of bumping into icebergs with, and there are others whom they fantasize about tearing into a bucket of wings with. In the long run, most would prefer the latter. And that's where Prinze comes in. When you capture their hearts and stomachs, the opening-weekend grosses will follow. No wonder he's the reigning king of cinema boyfriends.

Prinze was only 10 months old when his sitcom-star dad died of a self-inflicted gunshot wound at age 22. His mother and grandmother raised him in New Mexico, out of the spotlight and away from the lifestyle that took Prinze Sr. at the height of his fame. It certainly seems as though the result of this sheltered upbringing is that Junior was given by nature his father's camera-ready charisma and by nurture a courtly, female-friendly earnestness.

To a generation that wouldn't know "Chico and the Man" from the Captain & Tennille, Prinze is enigmatically vulnerable, just sad-eyed enough to appear soulful and sympathetic. His acting ability may scream summer stock, but the guileless, eager-to-please vibe that radiates in every performance wins in a way that flawless technique can't.

His persona seems custom-tailored to foster the notion of approachability, of the guy a girl can be her imperfect self with. In his leading-man breakthrough, "She's All That," he plays an athlete and academic superstar who transforms the class nerd into Cinderella but falls for her when she's still in full dork drag. And in "Head Over Heels," he's a suave man of mystery who lives across the street from a gaggle of supermodels, but is smitten with a klutzy art restorer.

His films are perfect wish fulfillment, even if his plain Janes are still ravishing starlets, because they represent the fantasy that the really good-looking, popular guy could be totally enraptured by the awkward girl that nobody else notices. What's more, Prinze makes it convincing. His forte is exuding something his young audience craves even more than infatuation -- acceptance.

In that vein, the No. 1 weapon in his charm arsenal turns out to be a very public romance with food. Ask any starry-eyed fan for a factoid about Prinze, and his enthusiasm for dining is invariably cited. It turns up in just about every interview he's ever done.

"I love food, man!" he gushed, in a typical snippet, to People. "If it doesn't eat me first, I'll pretty much eat it." And not only does the guy like to eat, he likes a girl who likes to eat -- he's been quoted more than once bragging about the allegedly prodigious appetite of his girlfriend, Sarah Michelle Gellar. While Gellar may not be picking up any work for the Lane Bryant catalog anytime soon, "Buffy the Vampire Slayer" watchers across the land breathed a belt-loosening sign of relief this season when the once rail-thin actress returned to TV with a few more feminine curves on her frame.

"I love taking a woman to dinner, and I love watching her enjoy her food. It's just a very sexy thing to me, and I've always liked it," Prinze confessed to Cosmopolitan. It's a crowd-pleasing statement if ever there was one, yet exactly the sort of thing few other Hollywood himbos would have the wherewithal to make.

And movie Prinze is just as gustatorily passionate. In "Down to You," he's the son of a cooking show host and -- ooh, baby -- an aspiring chef. In "Head Over Heels," he praises a date for making yummy noises through a meal, then orders every dessert on the menu.

Who needs Mel Gibson to answer the question of what women want? Prinze already knows -- they want someone they don't have to hide their Ben & Jerry's from. Never mind that his girlfriend is still undeniably diminutive, or that he himself possesses a midsection that's more six-pack than beer gut. In a waif-worshiping world, he embraces the sensuality of dining -- and even its booty-expanding consequences.

Prinze's sexy, finger-licking-good appeal has buoyed him through a career that already contains more turkeys than a Butterball farm in November. Like Keanu Reeves, even when he's giving a leaden reading of preposterously awful dialogue, he almost gets away with it. There's something devoid of pretension about the guy, something sweetly unstudied and unguarded. He emerges immaculate no matter how much crap he's in. It's a niche no other actor seems able to fill.

Leo DiCaprio blew it with his relentless off-screen club trolling and icy untouchability. Seth Green is adorable and talented, but too eccentric to cross over into true star territory. (But if Philip Seymour Hoffman can make the cover of GQ, anything is possible.) Joaquin Phoenix and Christian Bale are attractive and fine actors, but they're busily cornering the market on sociopath roles, something that doesn't necessarily translate into summer blockbuster status.

And after those guys, the pickings for the under-30 crowd start to get mighty slim. Only Heath Ledger ("The Patriot") and Chris Klein ("Election") give Prinze a real run for the leading-man money, and even they show signs already of becoming slick Hollywood packages, too glammed up for the goofy, down-to-earth roles that Prinze fills so amiably. Prinze, if he plays his cards right, could eventually go down the Will Smith and John Cusack path -- the star everybody loves for the entirely legitimate reason that he just seems so darn lovable.

Prinze's stature as official boyfriend of Gen Y has served him admirably ever since the "I Know What You Did Last Summer" screamers, but at the tender of age of almost 25, he's at a career crossroads.

He's only made one film with any real testosterone appeal -- "Wing Commander" -- a space adventure that quickly disappeared in the "Phantom Menace" shuffle two years ago. Meanwhile he's racked up a lifetime's worth of forgettable, date-movie treacle, in lackluster fare like "Boys and Girls" and "Head Over Heels." His next film, "Summer Catch," is yet another romantic comedy.

His movie after that may actually draw a few guys into the theater, but it doesn't portend altogether favorably, quality-wise. Prinze once again teams with his frequent costar, Matthew Lillard (the manic Jerry Lewis to Prinze's handsome, slightly ridiculous Dino), in the big-screen version of "Scooby-Doo."

The only question now is where Freddie Prinze Jr. can go from here, as his fans mature and take their Backstreet Boys posters down from their walls. His thespian skills aren't giving Anthony Hopkins sleepless nights, and he harbors no Ben and Matt-like aspirations to write, produce or otherwise strain himself creatively.

That may be just as well -- Prinze lacks the chops and inherent weirdness of a Johnny Depp, whose talent enabled him to make the transition gracefully from teen heartthrob to respected indie fixture. And unlike comedian's son turned big star Ben Stiller, Prinze simply isn't very funny.

But talent always takes a back seat to personality, and the intangible gift of real connection with the fans. If he can grow into more adult roles while maintaining his self-effacing allure, doing the "guy you'd bring home to Mom" routine he's so good at and doing it in a few decent films for a change, Prinze may become the first actor to bring an old-fashioned romantic flair to the audience raised on gross-out comedies and big-budget excuses for blowing stuff up.

And hey, Cary Grant never looked like he was working too hard either. Like Grant, Prinze's magnetism doesn't rest simply in the way he looks on the screen; it rests in how he fares in the imagination of his audience. And to Prinze's fans, he's best envisioned across a sumptuously appointed dinner table -- exactly where the best love affairs so often get their start.