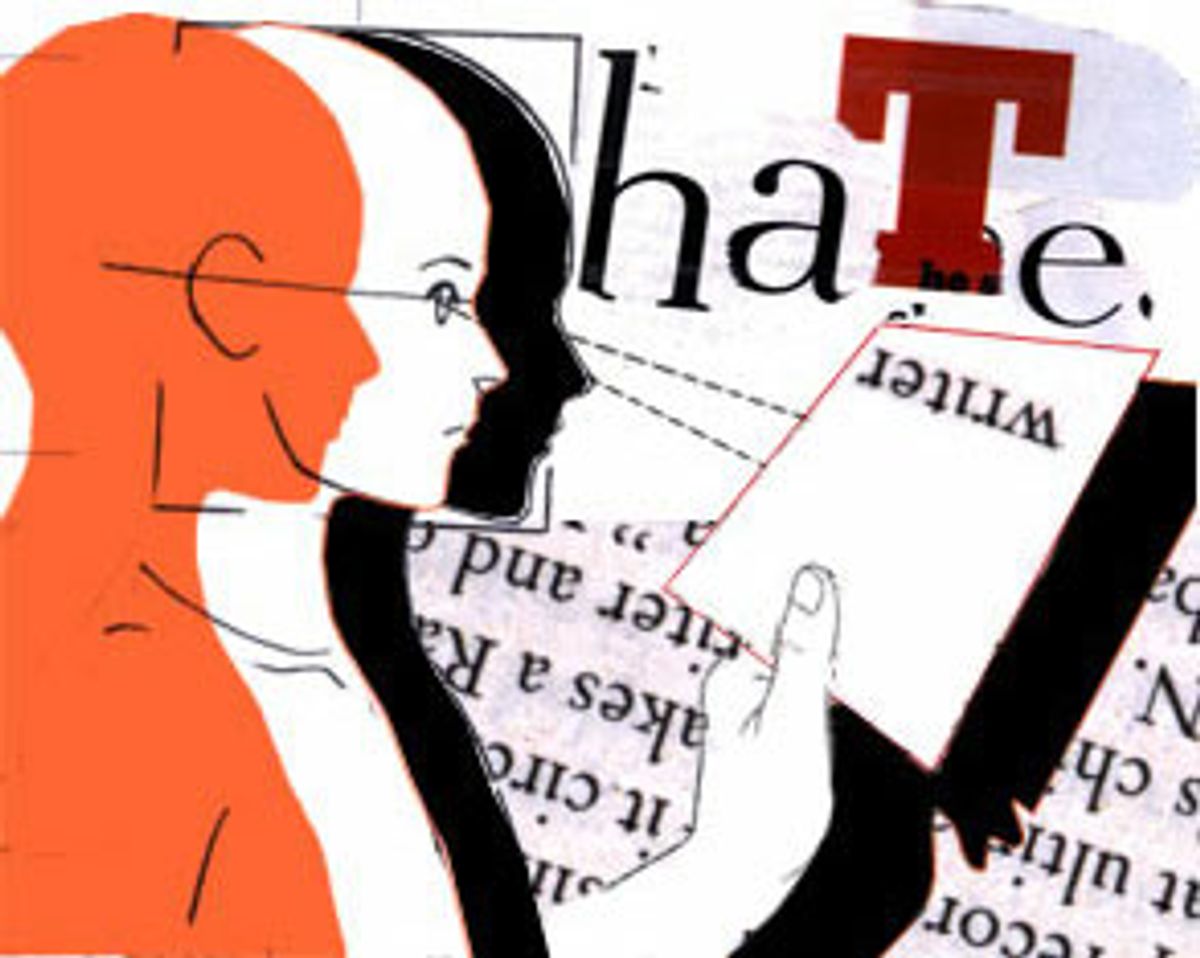 Hate mail confirms a vague, nagging feeling that you've done something wrong. It's a firm tap on the shoulder that says, "The jig is up." So when the first letter came, it was expected. The second, however, was a shock. By the third I was a wreck. How did he know it would take exactly and only three?

I started writing a few years ago, after I had a baby. I haven't completely figured out what led me to writing, but it was probably tied up with my son's birth and the attendant emotions that needed sorting.

I like the solitary work life. I write at a table in the bedroom. I send my ideas out into the void. The bedroom seems a safe enough place. I have been told that I am an introvert. What on earth makes me want to communicate with strangers in this perilous way -- standing naked in a field?

"You have to expect these things when you are a writer," my father says about the hate mail. "When you're in the public eye, anyone can read what you write."

The letters are effective and unsettling, to say the least. I have an unusual name, so he thinks I'm foreign. He calls me "Eurotrash." It's a relief because it means he doesn't really know me -- although he makes some pretty accurate guesses. He doesn't know that my parents simply like unusual names.

He spells my name correctly. I can only hope he's mispronouncing it. He uses it in ways I've never seen it used before -- paired with obscenities and crooked thoughts.

It bothers me that he has written my name and my address three different times on three different envelopes. My name is next to the buzzer outside my building so that people will have easier access to me. I am two doors and one buzzer away from danger. But the mail slips through, into the letter box, into my psyche.

I call the postal inspector but she never calls me back. One day I leave a message on her machine and I am in tears. Finally she calls. She tells me that letters like these don't usually lead to violence. She says there's nothing we can do; we have to wait until he makes a mistake.

My fingers shake when I open the mailbox. I pick through the stack. When a letter arrives I open it quickly. You read your mail. You do.

I spend most of a morning sitting in an old school chair at the police station, the kind with a desk attached. The police are standing around. They joke with one another. They drink coffee and ask me what I need in a skeptical way, as though there is nothing I can offer that will surprise them.

"I am getting anonymous hate mail," I say.

"Is it threatening?" they ask.

"Not specifically," I answer. "But the first one had feces in it." Sending feces is threatening, in my mind. At the very least it's a health hazard. The policewoman writes down what I say and photocopies the letters. She makes a file.

I am vulnerable to people's opinions of me. I partly believe what he says. When I tell my friends and family, I imagine that they partly believe what he says, too. They ask me what I wrote, what he wrote. "What does it matter what I wrote!?" I say. "Do you think I did something to deserve this?!" I can't yell at him, so I yell at them. I want unconditional support from everyone I know. I want protection. I have revealed too much about who I am.

I cling to his most obvious mistakes -- Eurotrash -- in the hope that he has gotten other things wrong, too. He is sarcastic and angry and a good speller. A person can be a good speller and be crazy, right? But still, it's hard that he's a good speller.

I try to have rational conversations with him in my mind, but it's hopeless. We get nowhere.

He owns a dog. It's his dog's feces he has sent. I always thought animal lovers were especially sensitive human beings. In my vulnerable state -- in spite of this blatant example of insensitivity -- dog ownership gives him stature.

He has decided I'm rich because I live in a certain neighborhood. He has decided I've stolen someone's job because I'm foreign. He attacks my writing and everything he can eke out about me from what I have written. But he reveals who he is in his writing, too. He has an aunt and a disabled sister. He doesn't know how much we have in common. He doesn't know that I have a sister and a disabled aunt.

I think about changing my byline. I will remove my address from the phone book. I will use only a first initial. I will give up writing.

But then he wins, says my editor.

I am unable to write for a month, two months. My editor calls. I say I'm not ready. He hires someone else to write on a topic I wanted to write about. I don't trust my motivations. Perhaps there's truth in what he says. I have been flippant. I have been patronizing. I have been biased.

At home I put the letters in a brown envelope and write "Anonymous Mail" in the top right-hand corner, avoiding the word "hate." I make a mental note to throw them away before my son can reach the shelf where I have put them. I don't want him to read these letters that have my name written all over them, with their inaccuracies and assumptions and possible wayward truths.

The feces were wrapped in a piece of foil; they came in a small padded envelope. I threw the feces away, then fished them out again and put them in a baggie. I washed my hands with soap, and rubbed them red. I am afraid of contamination or disease. I am afraid I will pass on germs to my son.

"Here's a little present from my best friend," he writes. The way he uses language is absurd: little present, best friend. He writes in sentences, with periods and commas and capital letters. He ignores the typical friendly greeting -- he does not say "Dear."

I imagine him in a room, at a desk or a table. I imagine the light in the room, and the clothes tossed on the bed. He has paper and a pen. He pulls up a chair. Something compels him to write. He doesn't know how much we have in common.

Lydie Raschka writes for Big Apple Parent, United Parenting Publications, and the West Side Spirit. She lives in New York.