A brand name you can trust 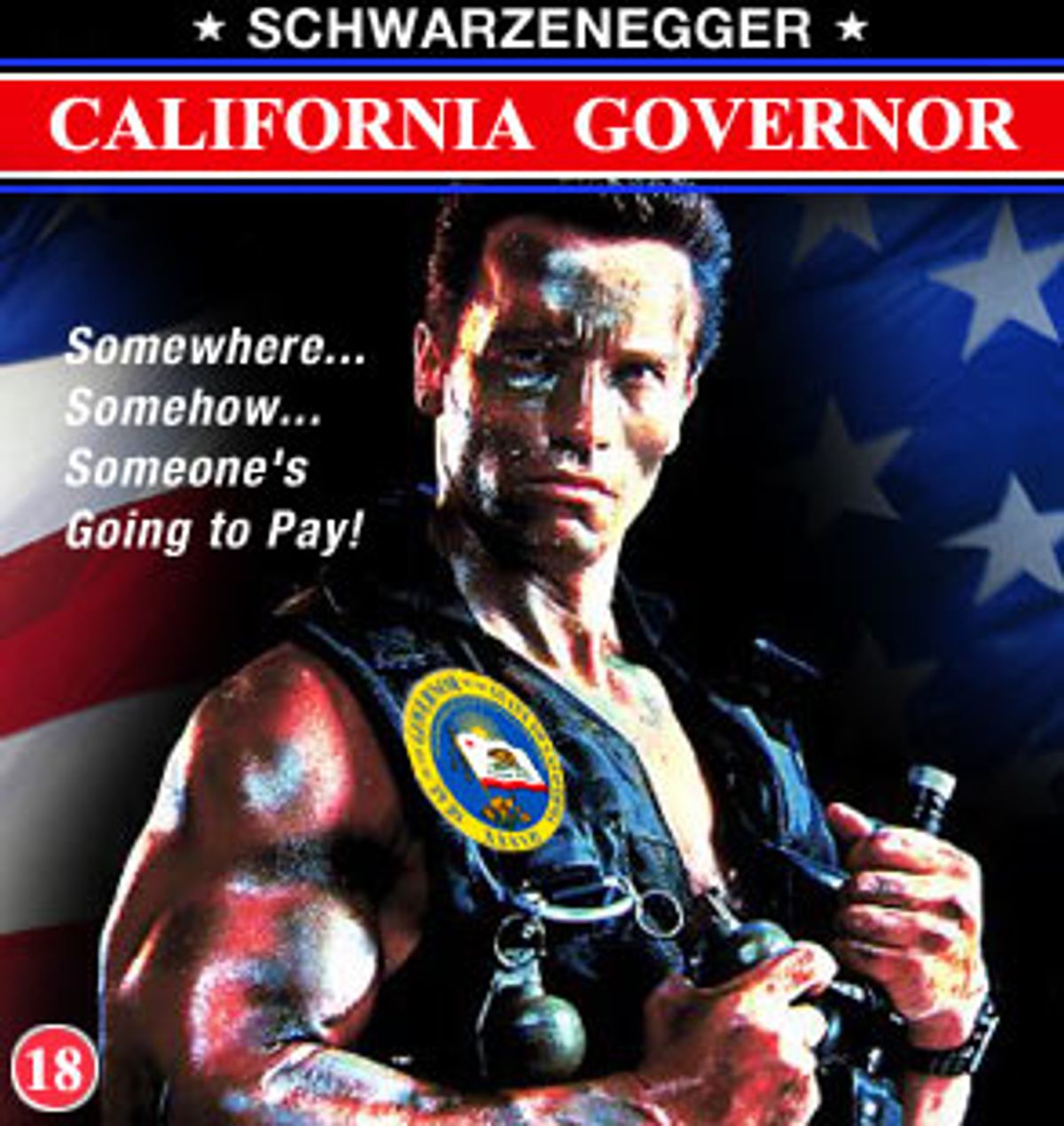 Earlier this month, Arnold Schwarzenegger told Los Angeles Times columnist George Skelton that he was considering abandoning his thriving acting career to run for governor of California in 2002.

"I have movie obligations through 2004," the actor said, presumably checking his schedule. "But I would sacrifice my, you know, $20 million a picture and all those things and forget about that to step in."

Schwarzenegger would gladly make these and other sacrifices so that California might enjoy the kind of action-figure leadership Minnesota basks in daily. Of course, the sting of Schwarzenegger's sacrifice would be mitigated by the fact that he is, as he has said, no longer as interested in making movies and money as he once was. (The last $20 million is always the least interesting.) For most Californians, of course, there would be no such mitigating factor.

"I love politics," the actor/activist/beef man told Skelton. "I get such great satisfaction out of helping people. It can lead -- and will lead, probably -- to some political office."

Sure, we laugh now, but lately it seems that every "joke" candidate is a shoo-in for office. The funnier the candidate and the higher the office, the better his chance. If Jesse Ventura could get himself elected governor of a sensible Midwestern state like Minnesota, Schwarzenegger would win California in a landslide. The number of "ironic" votes alone should guarantee him office space in Sacramento. (Californians may have just discovered their mitigating factor.)

Of course, like all actors with political ambitions, what Schwarzenegger really wants is to follow Ronald Reagan's footsteps all the way to the White House. But as Skelton points out (as anyone who has ever written about Schwarzenegger's political aspirations has pointed out), the actor was born in Austria and is therefore ineligible to run for president. If the repeated reminders sound a bit shrill and terrified, it's because they should. "Well, you'd have to redo the Constitution," a carefree Schwarzenegger told the Vancouver Sun in January, displaying either blatant contempt for Canadians' familiarity with the basics of the U.S. Constitution or the insouciant ignorance so valued in politics today. "But they've had so many amendments that it's not really a problem."

Ironically, while Schwarzenegger possesses the single most valuable trait a modern American politician can have -- what state Republican Party chairman John McGraw has called "incredible name identification" and what branding experts call a "compelling brand identity" -- he lacks the "presidential" look required to play POTUS on the screen. Jack Nicholson, Michael Douglas, John Travolta, Harrison Ford, Kevin Kline, Jeff Bridges, Bill Pullman and Gene Hackman are just some of the actor's contemporaries to have played the president. Anthony Hopkins (who was also born outside the country and is therefore ineligible to run for our nation's highest office) has portrayed two of them.

Schwarzenegger, meanwhile, probably has a better chance of getting himself elected governor of California than he does of getting the part of president in a major motion picture. Come to think of it, Reagan never played a presidential part, either. After all, anything can happen in real life, but in fiction, there are rules.

Truth may be stranger than fiction, but "reality" is apparently more litigious.

E! Online reported this week that CBS has filed a $5 million countersuit against former "Survivor" Stacey Stillman for breach of contract, extortion and defamation.

The network filed the countersuit after Stillman accused producer Mark Burnett of rigging the outcome of "Survivor" by persuading two other cast members to vote Stillman off the island and keeping 72-year-old Rudy Boesch in an effort to hold onto older audiences.

E! Online reports that CBS claims that Stillman "broke her confidentiality agreement with the network, which states that contestants can be held liable for $5 million in damages if they reveal inside information about the show."

That the "inside information" may include proof that the show was rigged apparently did not affect the network's decision to sue.

If a brand can't protect its compelling brand identity ...