Even with Vegas showgirls, Elvises with guns and trashy blow jobs, this tribute is hardly fit for a cretin -- much less a King. 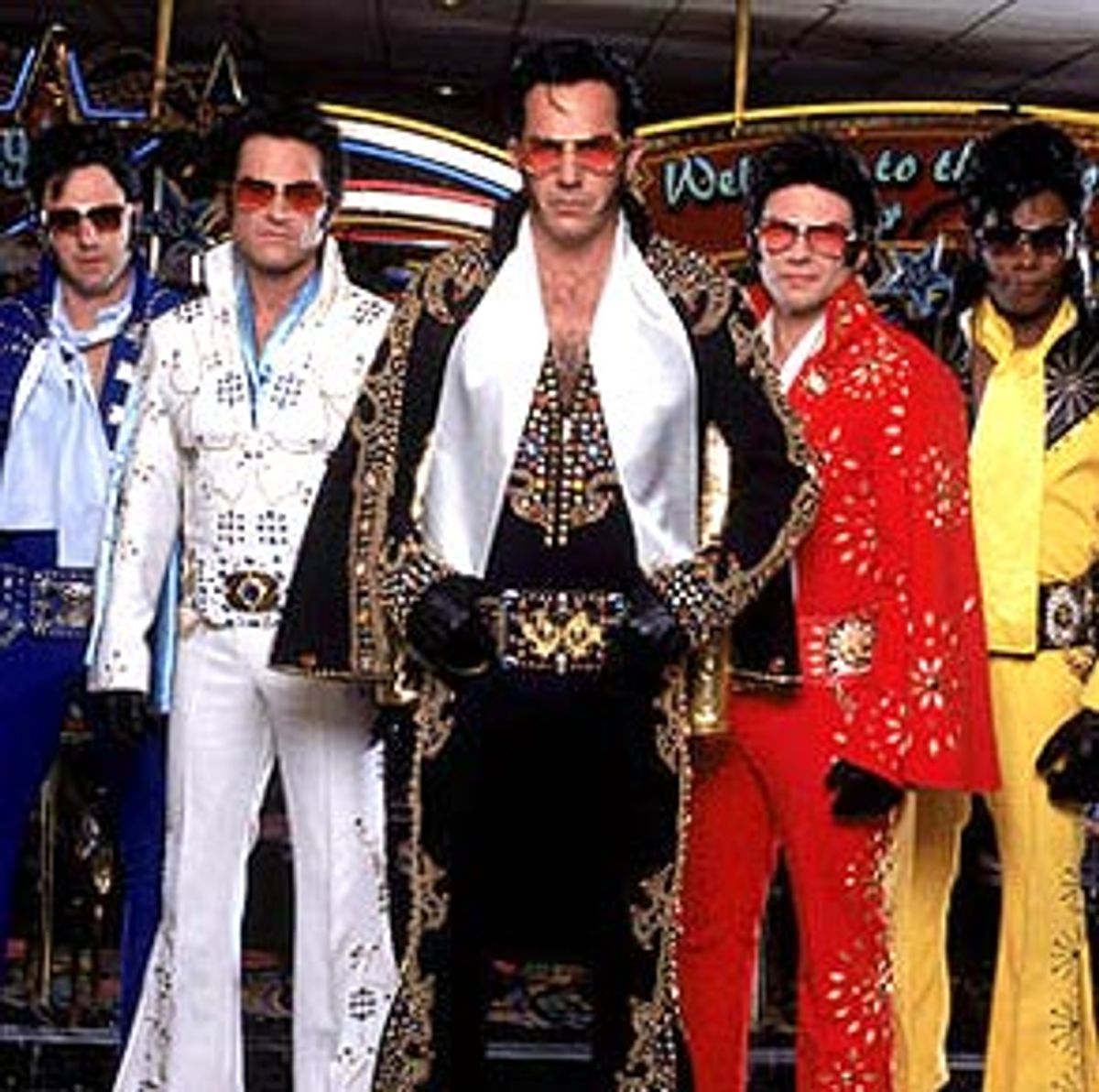 As a devout Elvis fan, and a fan of the Elvis of all eras, I have no trouble with Elvis impersonators as long as they approach their work with respect, dignity, a reasonable amount of talent and absolutely no smirking. In other words, they gotta sing it like they mean it.

If Demian Lichtenstein, a young director with an extensive background in music videos, could make an action picture about casino-robbing Elvis impersonators as if he meant it, I'd be willing to give him the benefit of the doubt, too. But from the opening credits of this noisy mess of a picture right through to the last soggy shot, Lichtenstein betrays little more than an affection for seasick camera angles and jagged cutting. He's got one terrific actor in his corner, Kurt Russell, and he doesn't know what to do with him.

Lichtenstein's also got a chance to pull off a glorious (if violent) Vegas tableaux replete with cavorting showgirls, percussive machine guns and assorted Elvises in jeweled capes, and he turns it into an idiotic bloodbath that gushes fake style but lacks even a shred of visual elegance. Lichtenstein grooves on bullets and blood and bedlam, but there's no grace, no drama, no sense of honor to the violence in "3,000 Miles to Graceland." It's a movie barely fit for a cretin, much less a King.

Murphy (Kevin Costner, in a villainous turn that shows more spark than most of his recent performances do, but not enough to kickstart this movie out of its peculiarly frenetic torpor) is a nutso ex-con who sincerely believes he's the illegitimate son of Elvis Presley. He and his ragtag band of ne'er-do-wells (Christian Slater, David Arquette and Bokeem Woodbine, the last of whom is killed in the first half-hour, thus filling the role of the movie's sacrificial African-American character) are tooling around the outskirts of Vegas, planning to rob a casino. They hook up with the disillusioned and taciturn Michael (Kurt Russell), an old compatriot of Murphy's who has just recently been sprung from prison, and it doesn't take much for Murphy to persuade him to join them.

Meanwhile, Michael has hooked up with Courteney Cox Arquette as a single mom who wears flounced low-cut dresses and high heels to do her laundry. Her young progeny, Jesse (David Kaye), is an unlikable little scamp who steals Michael's wallet as if it's second nature to him, while his mother looks on approvingly and reassures Michael, "He's really not a bad kid." The point is that everyone in "3,000 Miles to Graceland" is unsavory to some degree. This is a bunch of grizzled and lovable scalawags who joy ride through the desert in late-'50s vintage automobiles, shooting holes in things or people whenever necessary, and often when not.

There's nothing wrong with those bare-bones elements: I like a good scalawag as much as the next moviegoer, and maybe even more. It's just that Lichtenstein doesn't have the skill to bring out any distinctive shading in his characters. The story, from a script co-written by Lichtenstein and Richard Recco, meanders everywhere and nowhere, sometimes at breakneck speed, and yet its energy simply feels false. Stylistically, "3,000 Miles to Graceland" scans like a cross between "Charlie's Angels" and "Natural Born Killers," with none of the goofy, fruity charm of the former and all of the forced daring of the latter. The whole picture has the feel of a stunt that doesn't come off.

To his credit, Lichtenstein doesn't milk the Elvis-impersonation conceit to death, but he doesn't ride it as boldly as he might have, either. When the five desperadoes strut into the lobby of that casino, each dressed in a different jeweled jumpsuit, Lichtenstein does manage to inject his movie with a brief flush of adrenaline. That moment piggybacks on the movie's single most gorgeous sequence, when we see Russell (who previously channeled Elvis in a 1979 television biopic made by John Carpenter) swathing himself in an embellished cape, radiating something close to the essence of the real Elvis' style and swagger.

But mostly, Elvis is more of a prop than a presence in "3,000 Miles to Graceland," and aside from Russell, not one character reflects even one-100th of his cool. Costner, wearing sideburns as long and as sharp as the tail fins on the '59 Caddy he zips around in, is vaguely appealing at first: He's much sexier when he's scowling than when he's dancing with wolves. But his character is lazily and stupidly conceived. We're supposed to acknowledge that he's a genuinely evil guy, but we're also supposed to like him. At the movie's end, even one of the U.S. marshals who's been tailing him applauds his bold individuality, though to the rest of us, his Elvis fixation just reads as a particularly annoying brand of insanity.

And there's no getting around the fact that his behavior is just plain ugly and in places blatantly misogynist. We get to watch him slug Cox Arquette in the gut with a large metal bar, after which she writhes in pain. Earlier, he picks up a luscious, racy redhead (we never even learn her name) who looks like a minor, and it's strongly suggested that she willingly gives him a blow job in the front seat of his car. We're supposed to intuit that he's a decent guy because he rescued her from the fat, greasy gas-station owner she'd been hanging out with previously. (Costner shoots him, natch, though he hasn't done anything to deserve it.) But not long after he's picked her up, he hands her over to a biker who has pulled up alongside him, as if to dispose of her before she bores him. The last we see of her, she's waving brightly to him from the back of the motorcycle, headed for parts unknown, perhaps a glimmer of a grateful tear (or something) slipping down her cheek. What a guy!

Actors are misused right and left in "3,000 Miles to Graceland." Jon Lovitz, almost always good for a laugh, falls flat in his small role as an antiques dealer. Ice-T, an often-astonishing actor who's never quite gotten the attention (or the roles) he deserves, appears as a brazen munitions expert. He shows up in the last 10 minutes of the movie, has two lines and shortly thereafter dies. (He qualifies as the movie's second sacrificial African-American character, if anyone's counting.)

And Russell, a finer actor than he's often given credit for (he's shone in pictures like "Swing Shift" and "Used Cars") should be making much better use of his craggy, middle-aged charm. As it is, he doesn't have much to do but brood and glower and swagger self-consciously. He's capable of much greater subtlety -- or at least of simply being a lot cooler.

But there's no place for genuine cool in Lichtenstein's movie. He's a show-off of a director: Fans of Sam Peckinpah will certainly note the scorpion homage in the movie's opening minutes, but instead of being a tossed-off little fillip, it feels tacked-on, obvious and incredibly pleased with itself. But then, Lichtenstein is nothing but a hanger-on, the kind of director who's happy to glom onto this or that legend if he thinks it will raise his hipness quotient. He doesn't get away with nearly as much as he thinks he does. If you hear a door slam in the theater, you'll know that Elvis has left the building -- in disgust.