Did the Juice cut loose? 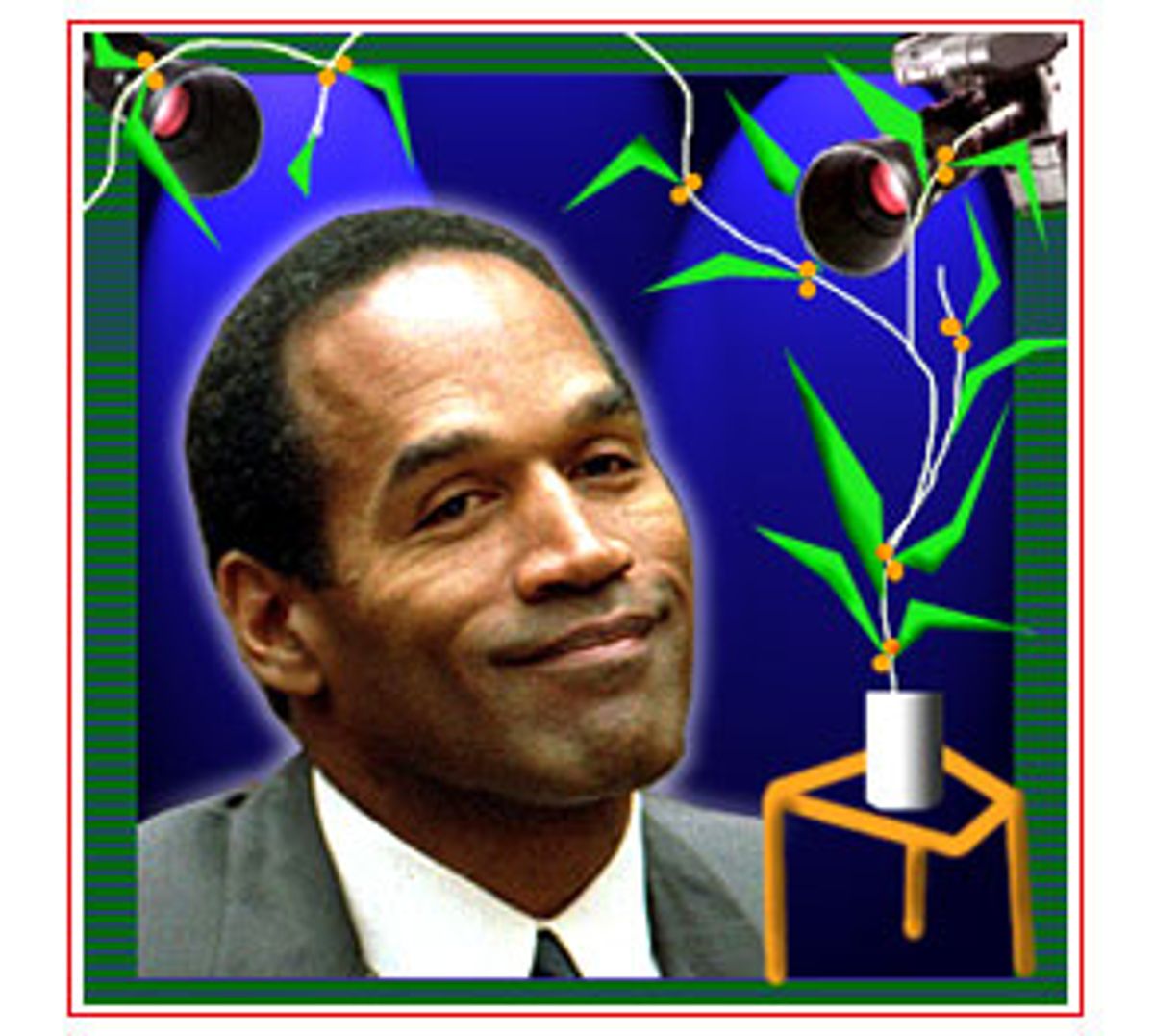 That's the claim being made in next week's Globe tabloid, according to both the New York Post and the New York Daily News, but O.J. says it ain't so. And the Juice's lawyer, Yale Galanter, tells both papers that his client is being set up a la Frank Gifford -- and is threatening to take the magazine to court.

According to the Globe, Simpson took part in a three-way romp with his sometime girlfriend Christine Prody and Playboy and Penthouse model Patty Kuprys in Miami's fancy Mutiny Hotel (in room 310, to be precise).

In the film, reportedly directed by Peter "Prescription for Lust" Davy, Simpson pleasures each woman four times and then watches them frolic, the Globe maintains. (At a certain point, according to the Globe, Simpson can be heard to sing, "If I Only Had a Brain.") Cameras were reportedly hidden in plants and light fixtures so it would look like Simpson had no idea what was going on.

But Galanter tells both the Post and the Daily News that he suspects Kuprys was paid by the Globe to set his client up and that, while the Simpson was in the hotel room alone with the two women, they were only drinking a nightcap. The sex part never happened, he says.

"Everybody was completely, 100 percent clothed," he tells the Post.

What's more, he tells the Daily News, "there is no videotape of him doing anything explicit."

At a certain point, Galanter says, O.J. spotted a camera in "the wall or in one of the plants" and took off in a hurry.

The Globe contends that Simpson knew precisely what was going on, and claims to have its hands on a signed contract in which Simpson agrees to collaborate with Davy on "an adult movie." But Galanter insists that the former football star's signature was forged.

If the signature don't fit ...

"I'm still quite busy. I'm in good health. I'd like to do a Pepsi commercial with Britney Spears."

An offer she can refuse

Julia Roberts and James Gandolfini may have hit it off big-time while working together on "The Mexican," but don't expect Roberts to join "The Sopranos" family anytime soon. The actress says she's "too scared" to make an appearance on the show.

"As a girl I could never be on because James, who's my friend, who I love, would either have to kill me in some horrible way," she tells USA Today, "or [have sex with] me."

And if it's the latter, Carmela will take care of the former.

-- Denis Leary on "what's not a capital offense but should be," in Maxim.

Oh, Larry, how could you?

Larry King -- or one of his stumped-for-a-fresh-idea bookers -- has apparently seen fit to allow Darva Conger and Rick Rockwell to stretch their allotted 15 minutes waaaay beyond the bounds of decency.

On Wednesday, Conger and Rockwell, those crazy lovebirds, were reunited on King's show for the first time since their ill-fated televised nuptials.

Nurse Conger was still cold as an icepack to Rockwell. (She neglected to look at him, although she did eventually fling a half-hearted apology his way.) Rockwell was still cracking dumb jokes. ("I've been worried sick about you," he said. Har-har-har.)

And there was King -- something of a marriage expert, having tied and untied the knot so many times himself -- gamely trying to bridge the gap. "I think he still likes you. I think he still looks at you like --" he ventured. But Conger shot ol' Lar down with a sharp, "Let's not -- let's not do that."

"This was never a relationship," Conger explained. "This was a bad TV show. That's all it was."

And apparently all it will ever be.

Send in the clones

"We believe that he thought the Robbie on stage was a clone and he wanted to try and prove it."

-- A spokesman for U.K. pop star Robbie Williams of a man who knocked Williams offstage during a concert Wednesday night in Stuttgart, Germany.