Former President Clinton's disgraceful exit raises an awful possibility: Maybe he was as morally bankrupt as his right-wing enemies said. 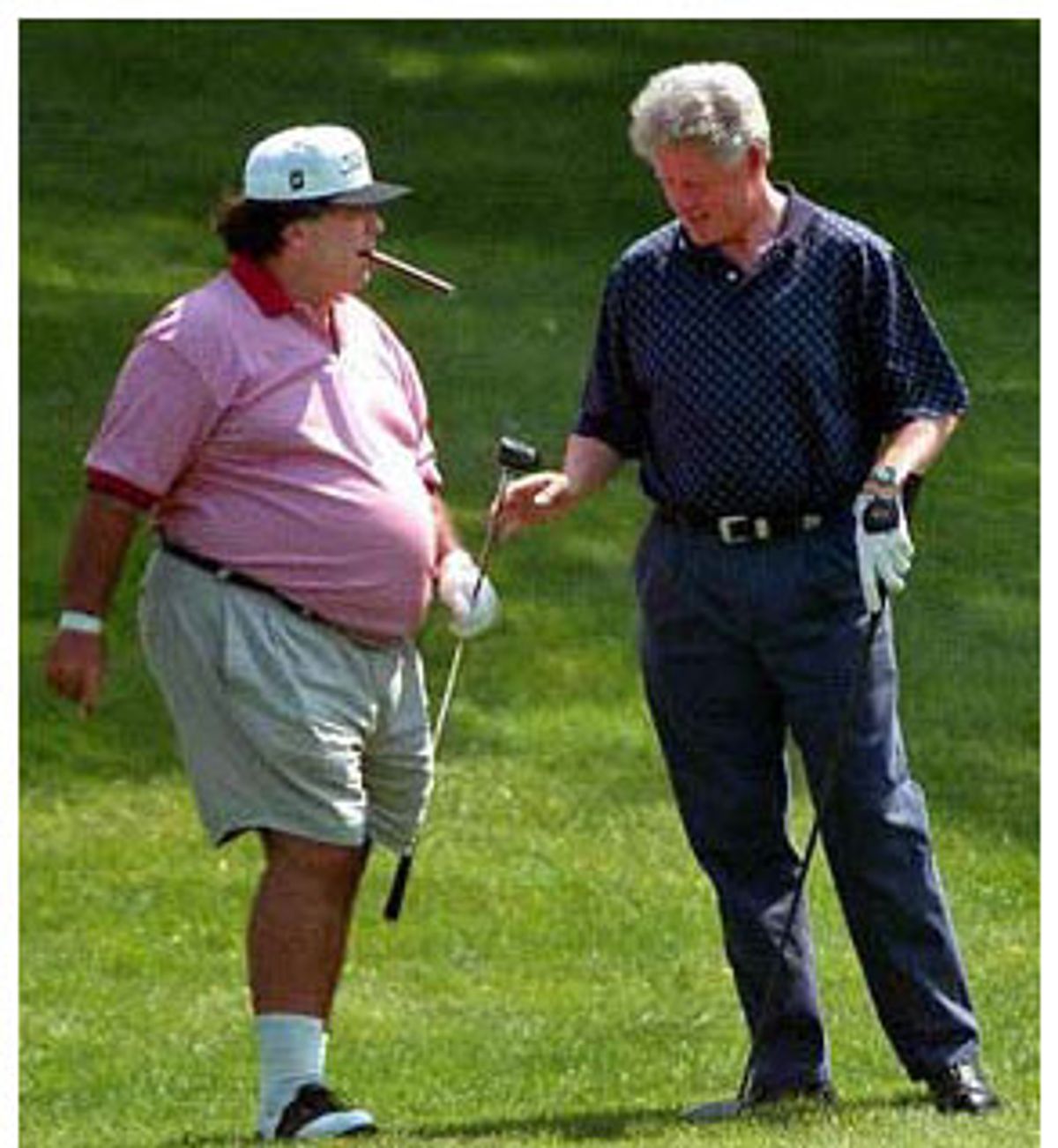 Former President Clinton needs to take a long, long sabbatical someplace far, far away. Jerry Brown's wanderings in the wilderness, after he left the California Statehouse, come to mind: He studied some Buddhism in Japan, ministered to the poor with Mother Teresa in India. Clinton should call Brown's travel agent immediately.

Faced with a new president who's so far humiliating them politically, the last thing the Democrats need is a directionless, undisciplined ex-president who won't go away. Clinton's still reeling from his self-indulgent last day in office. That was one hell of a party he threw Jan. 20, with those 175 pardons and commutations, one last big blast for his friends, his family, his benefactors -- and the GOP.

Republicans are still enjoying Clinton's last-minute bacchanal of bad judgment. Now we have the news that Sen. Hillary Clinton's brother Hugh Rodham pocketed $400,000 thanks to his work on behalf of two well-connected crooks his brother-in-law and golfing buddy pardoned -- Rodham has now returned the money -- while her campaign treasurer worked on behalf of two other felons. The former president says he didn't know Rodham was receiving money from either pardon recipient, though interestingly, he hasn't said they didn't discuss the pardon. Hillary Clinton insists she didn't talk to anyone, neither her brother nor her campaign aide, about the disputed pardons. But as the story gets weirder, who knows what to believe?

Meanwhile, the ex-president digs himself deeper with every attempt to explain what he did, having to correct his claim in Sunday's New York Times that three Republican lawyers, who did some legal work for tax-evader Marc Rich, had backed Rich's appeal for a pardon. It's the Lewinsky scandal all over again, only this one is serious. We've got the same pompous, self-righteous, absolutist language -- "There's not a single, solitary shred of evidence that I did anything wrong" -- a claim that's utterly unbelievable, thanks to its echoes of the disgraceful, finger-wagging "I did not have sex with that woman" speech.

Again, he admits to some bad process, maybe bad judgment, to paying insufficient attention to his aides' advice, to an excess of compassion (remember the cover story that he was "ministering" to the troubled young Lewinsky?) And again, he blames the vast right-wing conspiracy for his troubles. "The Republicans had other plans for me," he says mournfully.

Of course they did. In both scandals, Clinton's poor judgment, especially in light of the way his enemies are out to get him, is astonishing. But the pardon scandal matters in a way the Lewinsky mess never did. Clinton's Oval Office blow jobs made him a bad husband and a tacky philanderer, but had little to do with the job he did as president. His last-minute Oval Office pardons may well, in the end, turn out to make him a bad president, once the eight-year political and moral balance sheet is added up.

The Marc Rich pardon was bad enough. Whether or not then-U.S. Attorney Rudy Giuliani overreached in going after Rich, whether or not Rich and partner Pincus Green should have been pursued civilly, not criminally, no matter how many good deeds he's done for the Israelis, there's no escaping the fact that Rich's wealth and his social connections to the Clintons got him VIP treatment. And it's hard to work up much goodwill for the man. The fact that he failed to return to the U.S. even to say goodbye to his dying daughter -- a tragedy his defenders try to use to make the prosecutors look bad -- makes him seem more venal, not less, to me.

And there's something shady about Clinton's relationship with Denise Rich. Whether he was interested in her $450,000 donation to his presidential library, her largesse to the Democratic Party or her other considerable personal assets, there was something unseemly in the way the world's most powerful man kept finding time -- captured in Jack Quinn's embarrassing e-mail trail -- to reassure the worried, wealthy divorcée he was working hard for her ex-husband.

But of course it's not just Rich and Green. There's Carlos Vignali, the cocaine trafficker whose father was a big Democratic contributor (and one of the two men whose lawyers paid Hugh Rodham $200,000 for his services). Thanks to his well-connected dad, Vignali relied on a network of folks close to the Clintons. "How'd you get out?" Vignali's lawyer asked him, shocked at his client's release halfway through his 15-year sentence. "Word around prison was that it was the right time to approach the president," Vignali replied, according to the L.A. Times.

"This was a straight-up drug dealer, a source of cocaine, proven at trial, convicted by a jury and sentenced to a fair sentence," the U.S. attorney who prosecuted him, Todd Jones, told Good Morning America. Jones, who is black, said Vignali's pardon "further erodes any confidence that the public, particularly communities of color, may have that federal drug laws are enforced fairly." Indeed. Prominent Los Angeles Democrats, as well as Cardinal Roger Mahony, also pleaded Vignali's case, but Mahony at least has since said he regrets his involvement. So should Clinton.

Then there's Hugh Rodham's other would-be benefactor, Glenn Braswell, the herbal-medicine mogul sentenced to three years in prison in 1983 for mail fraud, perjury and tax evasion. Clinton, lamely, claims he didn't know that Braswell was under investigation by federal prosecutors for separate cases of tax evasion and money laundering, which his pardon made harder to prosecute. He might have known if the pardon had gone through normal Justice Department channels, but Braswell was apparently too deserving of urgent mercy to abide by the normal process. Maybe he had a sick friend who desperately needed one of the phony baldness cures Braswell specialized in providing.

The list goes on. There's Tom Bhakta, another Arkansas businessman convicted of tax evasion. (His name was misspelled in his hasty pardon). For geographic balance, we have the four New York Hasidic leaders -- convicted of stealing $40 million in student grants, small-business loans and housing subsidies from their suburban New Square community (those guys certainly took a village, literally) -- after their representatives met with the president and his wife, their new senator, in December. In that case, no money is alleged to have changed hands, but there may have been political considerations at play. On Election Day, the New York Daily News reported, the New Square community gave only 12 votes out of more than 1,400 to Clinton's GOP opponent Rick Lazio, while a nearby Hasidic community not affiliated with New Square chose Lazio over Clinton, 781 to 26.

There are no doubt other stinky pardons. This list alone makes the pardons Clinton granted strictly on personal prerogative -- to his brother Roger for his cocaine conviction (Roger will need another, thanks to his DUI last weekend); to his Whitewater pal, Susan McDougal, who went to jail rather than talk to Kenneth Starr -- look humanitarian by comparison. (And believers in the vast left-wing conspiracy will love the footnote that Hugh Rodham's lawyer, Nancy Luque, defended former Kathleen Willey pal Julie Hiatt Steele when she was battling the evil Starr machine.)

Now, instead of battling, say, evil Starr machine factotum Ted Olson, newly appointed as George W. Bush's solicitor general, Democrats are having to either defend or distance themselves from Clinton's mess. These outrageous pardons seem to confirm everything Clinton-haters said about them (well, maybe not the charges that they murdered small children, or poor Vince Foster). They appear to be the corrupt, self-dealing mandarins of their opponents' most virulent imaginings, insulated from the implications of their grasping and their bad judgment by layers of protective minions all these years.

But in the month since they left the White House, their protective cocoon unraveled. They've looked increasingly naked and vulnerable and, well, loathsome ever since. During the Grammys Wednesday night, at the very same Los Angeles Staples Center where Clinton was welcomed as a hero during last August's Democratic Convention, the ex-president was a bitter punch line. The venerable Robbie Robertson lamented that Indian activist Leonard Peltier "wasn't Marc Rich enough" to get a pardon from the president.

Hilariously, now it's Republicans who are urging Dems to hang tough, to stand by their man. William Safire laid out grounds for defending Clinton in a recent column; Tucker Carlson preached a similar course this week on CNN. But other conservatives are a little more honest. "Clinton has mocked the indulgence of his one-time defenders and made them out for fools," David Tell writes in the Weekly Standard. As a Clinton defender, I have to admit he's right.

Of course Tell and others insist that Clinton's demoralized backers really only have themselves to blame, since they looked away from eight years of scandals from Whitewater to Travelgate to the Lewinsky mess. I don't buy that. But I will admit the sleaziness and recklessness of the pardons reeks of Clinton's worst excesses: grandiosity, self-indulgence, sentimentality; and maybe, after impeachment, a sense that he was beyond rebuke, somehow beyond punishment, and the normal rules just didn't apply to him.

We still don't have all the facts about all the pardons. We may never. But if Clinton really abused the power of the presidency -- and the power to pardon may be the most sacred, in a way, beyond the bounds of any other branch of government to reverse or rectify -- as part of any kind of quid pro quo, political, financial or social, he will have done what his enemies never could do: tarnish his legacy irrevocably, ensuring that when the moral accounting is complete, he is judged a failed president.